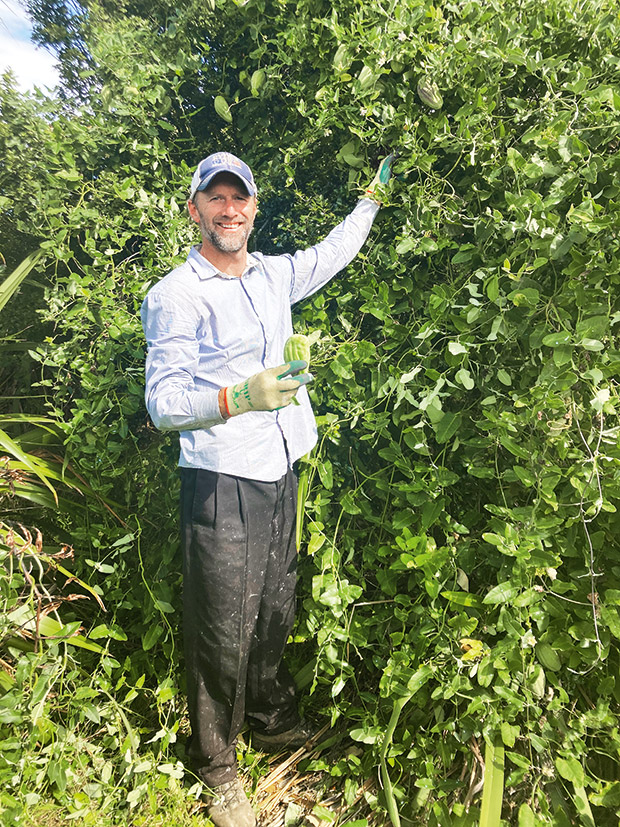 A crusade against the noxious vine has grown from one to a thousand-strong team.

Richard Henty is hastily packing his bags. He may be on holiday, but his bags — eight black rubbish liners — don’t include much in the way of jandals and tee-shirts. If his wife dared to ask him to unpack, hundreds of green pods would come tumbling out.

The pods are from the moth plant, a poisonous vine that smothers native vegetation. Each pod contains hundreds of seeds, one of the reasons why the vine has so successfully increased its presence around the upper half of the North Island.

Richard, head of science at Howick College, views killing the pest more as a hobby than a chore. That’s why, on holiday or weekend, he is prepared to go to battle. He uses a five-metre orange pole like a sword to attack out-of-reach pods; his backpack a shield against pokes and prickles in the bush.

“There are others as maniacal as me,” he says, nodding to his secateurs and gardening gloves. “We keep our gear in the car, pull up to a random kerb and do a quick binge pull. It’s great there’s such enthusiasm for it.” Richard was first introduced to the invasive vine on Motuihe Island. In 2004, he and the environmental club at Macleans College — in nearby Bucklands Beach — took day trips to the island to help with bush regeneration. He hadn’t anticipated that the moth plant, one of the weeds on Motuihe, would also be prevalent on the mainland. “When I returned to Auckland, I started seeing it everywhere,” he says. “Moth plant haunted me from then on.”

It’s an uphill battle to control a vine that proliferates highway strips, reserves and backyards. Richard started weeding around Howick in his spare time, as well as jotting down some 500 moth plant locations to revisit the following year. “But as soon as I started venturing away from Howick, I realized many more man-hours were needed,” he says.

In 2012, Richard took to Facebook to encourage others to join his quest. The Society Totally Against Moth Plant (STAMP) relies on group members to take action on their own accord — no formal meetings or funding involved. Moth plant locations are plotted on a shared GIS map and colour-coded by severity so individuals or groups can take appropriate action. This year, the Facebook group surpassed 1000 members.

Over the years, STAMP has noted more than 9000 moth plant sites around Auckland, with smaller clusters around Whangārei, Hawke’s Bay and Gisborne. Expanding the map with new sightings — and monitoring old sites for regrowth — is crucial to the society. “We would lose a lot of parklands if we weren’t keeping an eye on moth plant. By preventing its spread, we are protecting the greater ecosystem,” Richard says. 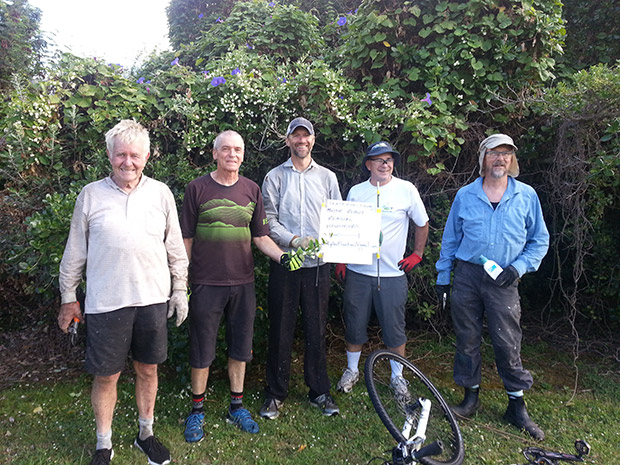 On a typical week, he spends a few hours destroying the vine throughout Auckland’s suburbs. Perhaps even longer if it’s a holiday. Nevertheless, he insists he’s no backyard hero.

“People have been doing this for years,” he says. “I just started a group that brings like-minded people together.”

Araujia sericifera was introduced to New Zealand in the late 19th century. “It is one of many vines that was once beautiful in the garden until it decided to jump to random places and strangle trees,” says Richard.

More stories you might like:
How to grow miner’s lettuce and corn salad (mache): Two nutritious, delicious greens that love winter

The fast-growing evergreen vine can grow up to eight metres high and is primarily found in the North Island, thanks to its preference for a warm climate. Each inedible pod contains some 300 seeds; disposing of pods and pulling out seedlings are essential to prevent the spread of the vine.

Richard either snips the primary root and applies a glyphosate-based gel or digs out the roots completely. Join the Society Totally Against Moth Plant on Facebook.