How to make a wet-felted beret 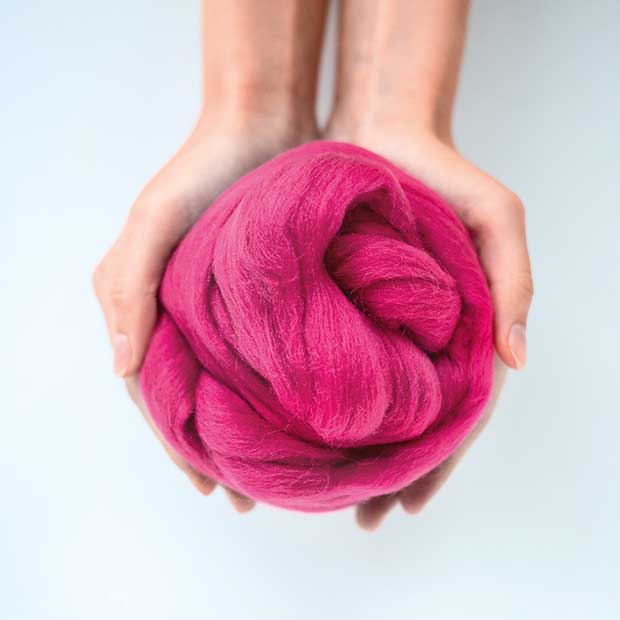 Turn your wool into a nice, cosy felt hat for winter.

Felting may look complicated, but the process is relatively easy. It’s a little time-consuming, but once you’ve got the hang of it, you’ll be hooked. I certainly am.

I’ve made everything from slippers and scarves to table runners and rugs. If you have access to plenty of wool, there’s no stopping you.

The wool can be dyed with home-harvested plant materials or commercial dyes to create different colours. If you’d rather have a quick option, you can buy wool rovings online or at craft stores. Roving (pictured below) is wool that has been brushed until the strands are mostly sitting side-by- side, but not quite, so the strands are still a little fuzzy and will ‘grab’ each other when agitated, perfect for felting. 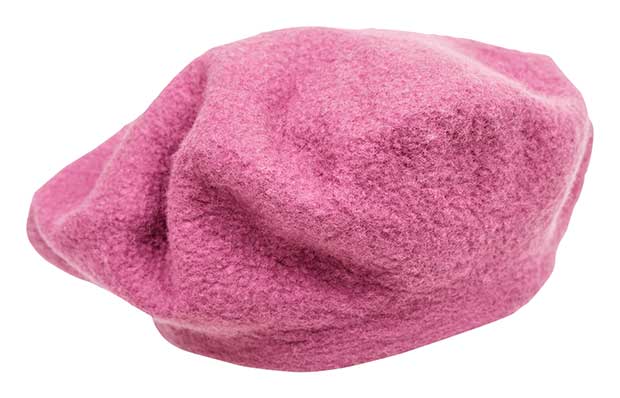 Felt-making is an ancient craft used to make everything from tents (yurts) to clothing. It’s produced when wool or other animal fibres are matted, condensed and then pressed together.

Legend has it that Saints Clement and Christopher, when fleeing persecution, stuffed their sandals with wool to prevent blisters. By their journey’s end, the movement and sweat had transformed the wool into felt and that’s how socks were invented.

Heat and moisture cause the outer scales of the fibre to open, and repeated agitation and compression causes the fibres to hook together. That results in a permanent bond between the fibres, creating a single piece of fabric which is irreversible.

In the modern-day process of wet-felting, we use soap or detergent with hot water. The soap enables the fibres to slide easily over one another, allowing them to become tangled and hooked together.

HOW TO MAKE A BERET 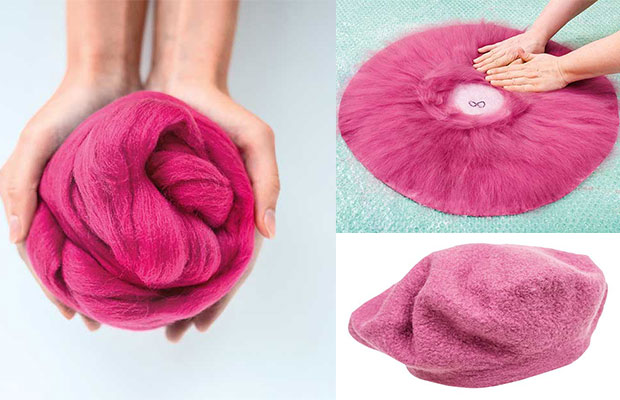 When making anything using the wet-felting technique, the pattern is made larger than the desired outcome to allow for about 30 per cent shrinkage during the felting process. 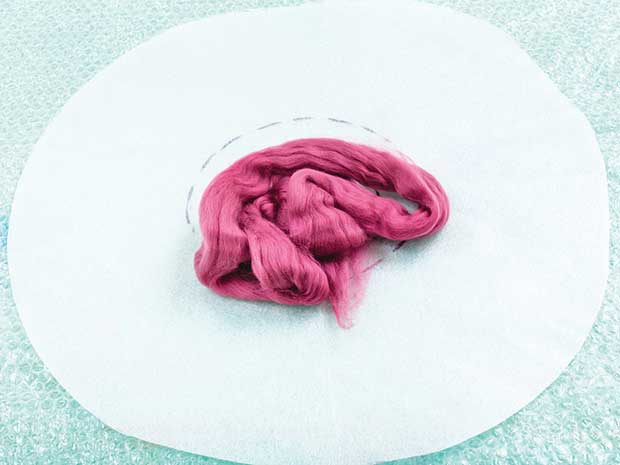 Lay the large plastic sheet down on a large work surface or the floor. Make a circular template (which is also a ‘resist’) out of the plastic sheet or tracing paper with a 40cm diameter. The template is your pattern, but also a resist, a barrier that creates the interior of the beret. Mark one side of the resist with a circle in the centre that has a diameter of 12-15cm. You can mark another circle just outside of the first circle if you wish, as you can see in the image in Step 2, as a guide as to where to lay the roving in a later step. Make two even piles of roving, one for each side of your beret. 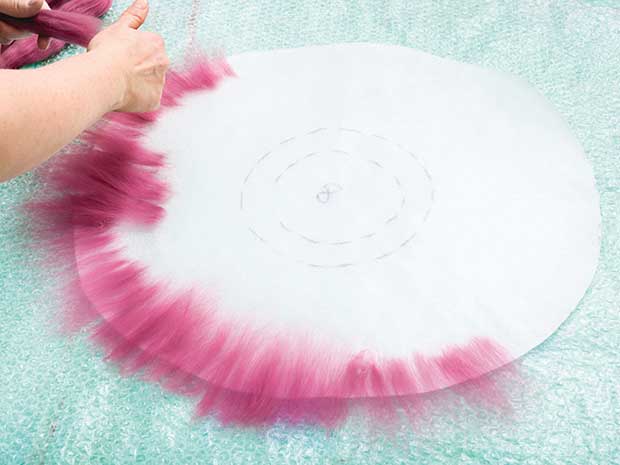 Work one of the piles of roving, pulling off small pieces between your fingers and palm of your hand. You don’t want them to be too chunky, but also not too wispy, or the fibres won’t mat together. Start on the underside of the template (which will form the top of the beret) and lay the fibre onto the paper resist with the pieces pointing into the centre for the first layer. Let the wool hang over the sides by about 5cm. 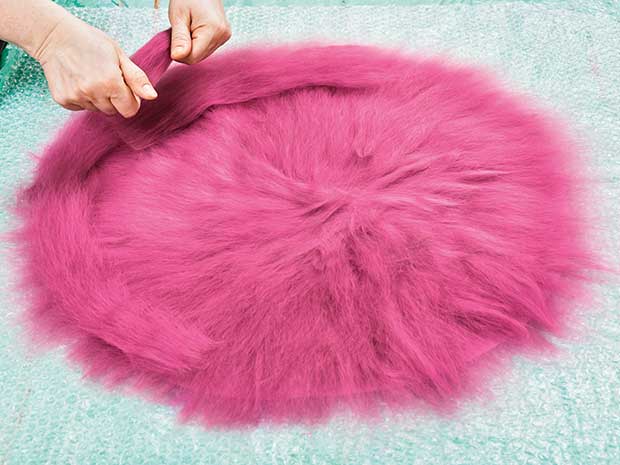 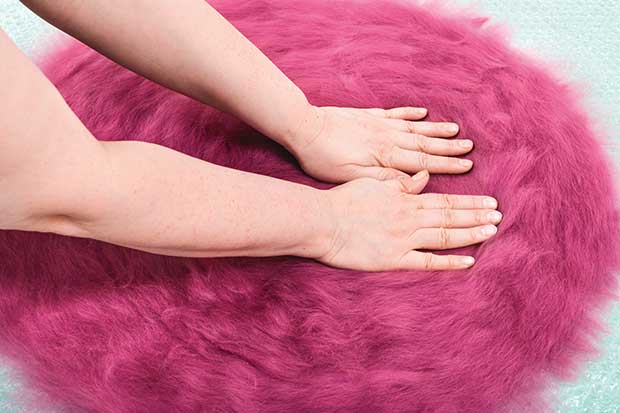 Once you’ve finished the four layers, press your hands onto the fibre to check for any weak spots, which may form holes in the felting process. Fill in if necessary. 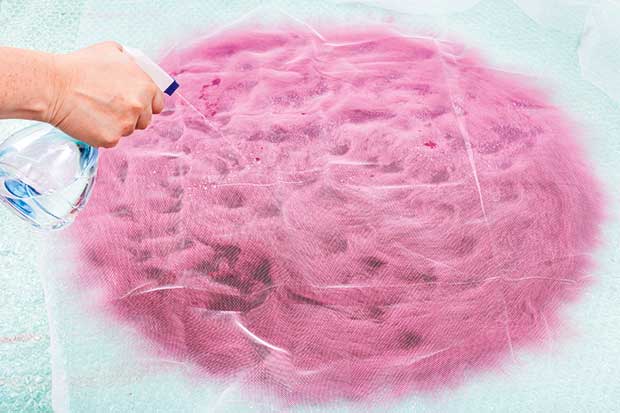 Lay the tulle over the fibre. Position it so there is enough to cover the other side as well. Fill your bottle with hot water, add 2-3 drops of detergent, shake and squirt some soapy water onto the fibre. Press down gently, smoothing the fibres out. Don’t rub energetically at this stage or the fibres may move. Lay the bubble wrap on top, bubble side down. Place the cardboard on top to help you flip the beret over. 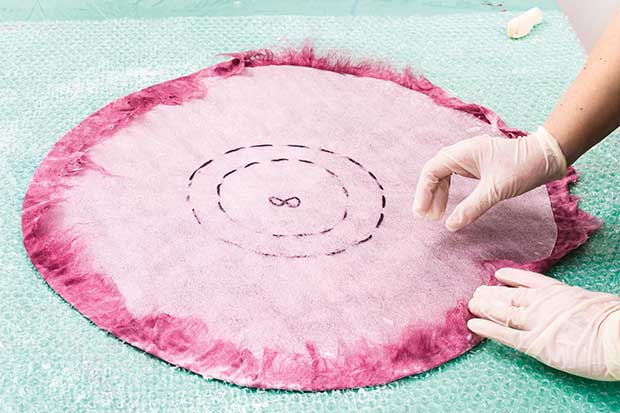 Turn the beret over. Fold the overhanging wool in, over the resist. Use your other pile of rovings to add pieces of fibre as you did the first side, but for this first layer go around in a circle. Leave the centre circle free from fibre. Add a second layer, placing the fibres in the opposite direction, with the pieces pointing into the centre. You don’t need to let the fibre overhang the edges this time. Just place it right up to the edge. 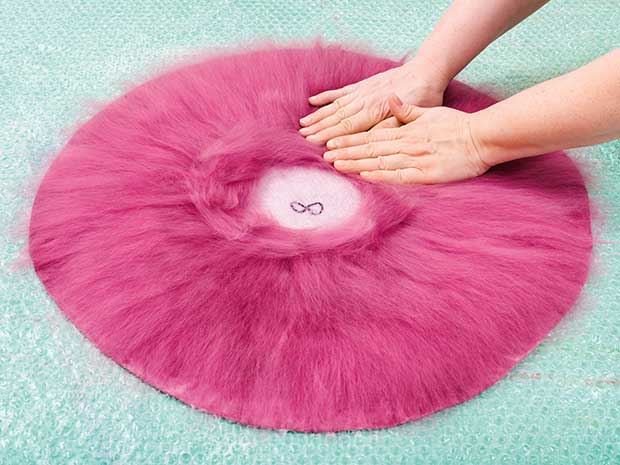 Continue alternating layers until you have completed four layers. Add a small ring of fibres just outside the opening circle. Pat down on the fibres to check for any weak spots. Fill in, if necessary. 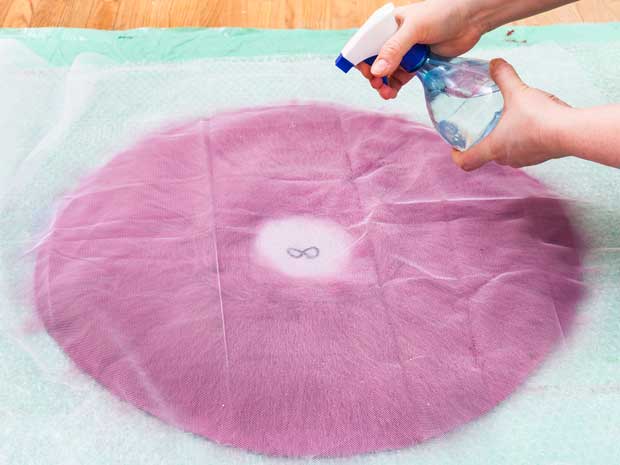 Cover with the tulle. Sprinkle with hot soapy water and press down with your hands. Don’t add too much water. You know you’ve added too much if water pools between your fingers when you press on the fibre. Pat with the spare towel, if necessary, to get rid of the extra water. 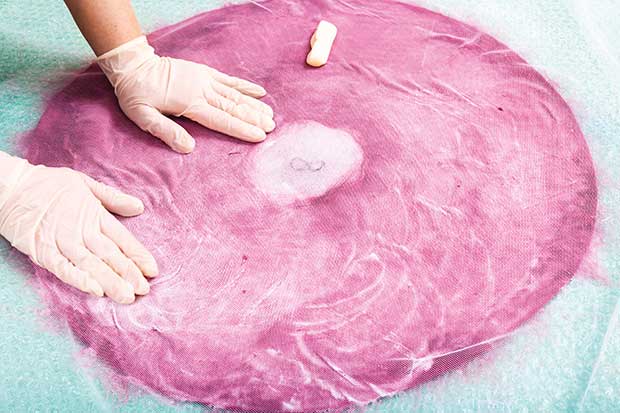 Lather up your hands with the bar of soap, then gently rub up and down then sideways over the netting for several minutes. You want to make sure the fibres are sticking together. Don’t rub overly hard in the beginning, or the fibres may move. 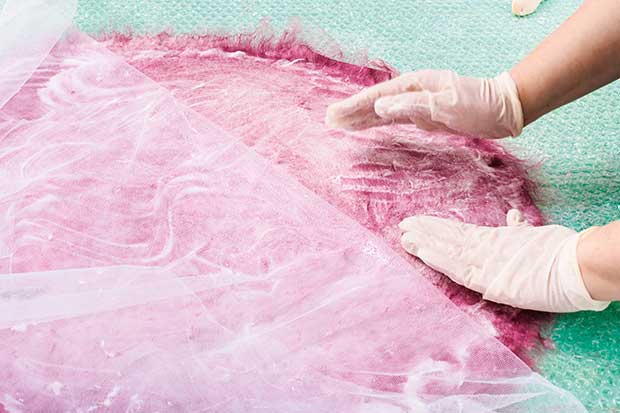 Remove the tulle and turn the beret over. Remove the bubble wrap. If the fibres at the edges of the circle are a little baggy, push them back inwards so they sit flush with the edges again. Put the tulle back in place. Lather your hands with soap and rub up and down then sideways over the netting, as above. If you see wrinkles, just gently rub them out. Place the bubblewrap back over the beret, and turn it over again. Repeat step 9, then turn over again and repeat step 10. 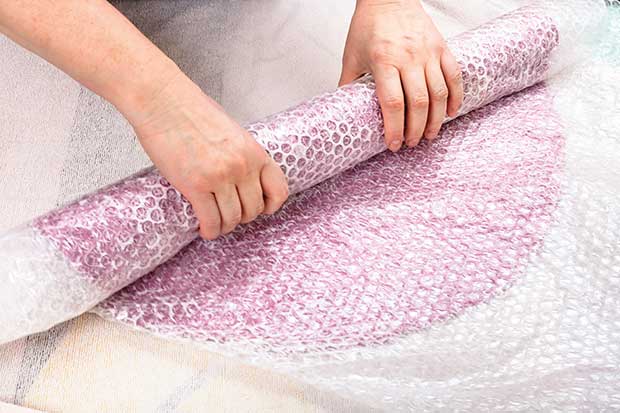 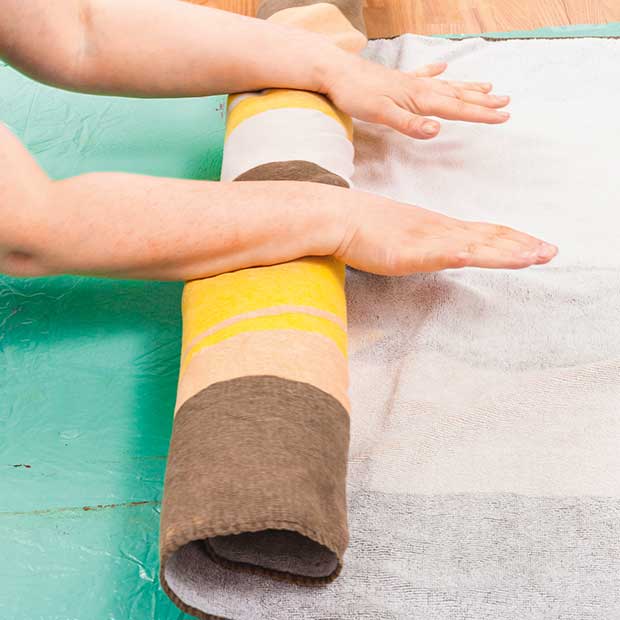 Roll the bubblewrap and beret up inside the towel. Roll backwards and forwards, like a rolling pin, about 50 times. It’s easier and less tiring to roll using your forearms. Unroll the towel and bubblewrap, turn the beret to another position, then roll up again.

Roll backwards and forwards another 50 times. Do this 5-6 times, turning the beret each time, as well as turning it over. The fibre shrinks in the direction it’s rolled, so you need to turn the beret so it keeps its shape. Once you’ve finished rolling, do a pinch test. Pinch the fibres together and lift slightly. If individual fibres come away on their own, the felting process is not yet complete. You will need to roll some more. If, when pinching the fibres, the entire piece lifts (the fibres stay together), it’s ready. 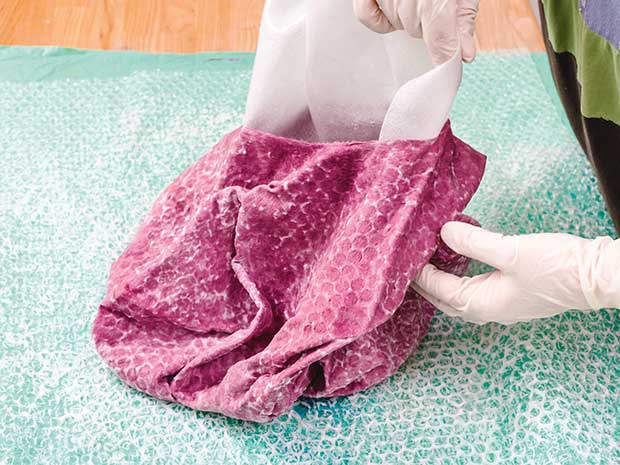 Remove the resist from the inside of the beret. To remove the creases on the beret, add a bit more soapy water and massage them out. 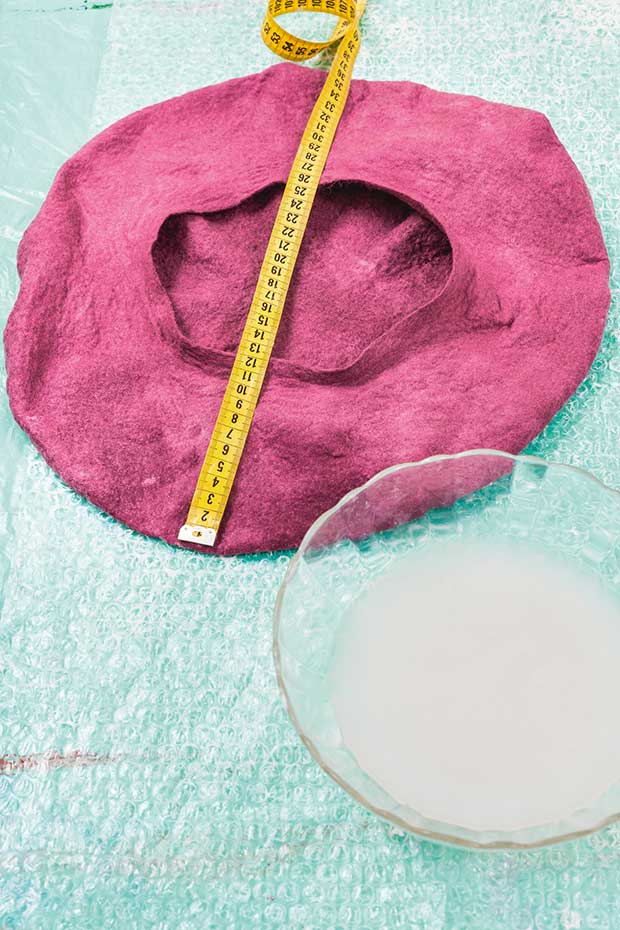 When the creases are removed, add more soapy water and rub the beret against itself (like you are hand-washing something). Then rinse the beret under warm water, then hot water, then cold water. Soak the beret in 2 litres of cold water and 2 tablespoons of white vinegar for 15 minutes. This gets rid of any soap residue.

Place the beret on a hat block or polystyrene head to dry.

Felt is ready when it feels smooth and dense. The longer you agitate it, the stiller the felt becomes. 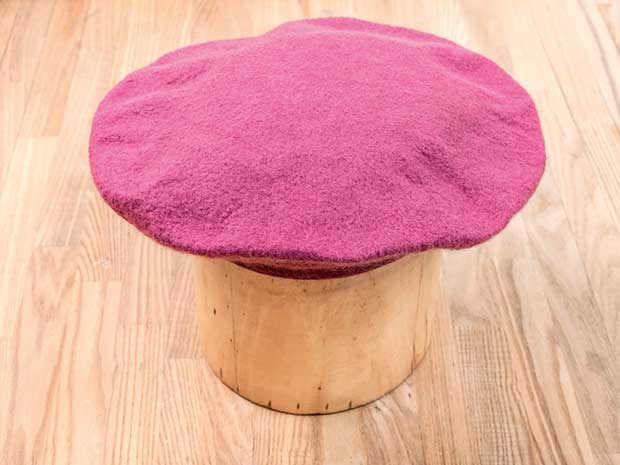