5 reasons to add guinea fowl to your flock 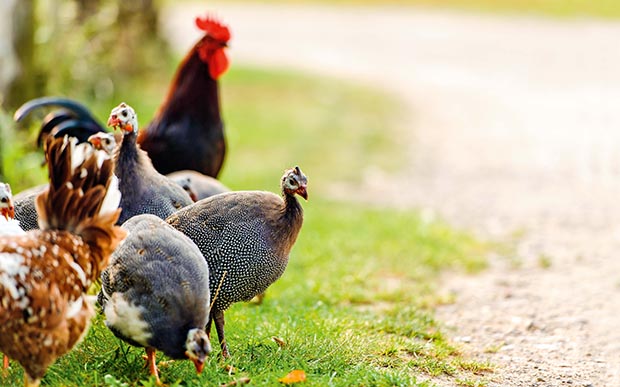 These birds look crazy, sound crazy and can act crazy too, but no person, insect pest or predator can get past them. Here are five good reasons to add guinea fowl to your flock.

1. They are the cheapest security guards you can employ

You can spend a lot on security alarms and cameras, but you still won’t beat the goofy guinea fowl for its 24-7, no-fail warning system. Talk to owners of guinea fowl and they’ll tell you these birds are crazy.

You can lavish your love and attention on them from the moment they hatch, but they’ll still be about as friendly as a half-tame cat and throw out that same warning call when you approach – even at a regular feeding time – and it’s one hell of a warning.  They’re the type of bird that doesn’t appreciate fences either so if you’re going to choose to include guinea fowl on your block, it pays to have your neighbours onside with their calling, wandering natures, and/or live a distance away.

The good thing is the noise isn’t like a crowing rooster at 4am, but it is a loud, very effective warning if a guinea fowl spots an intruder. Which may be at 4am. Guinea fowl have been known to scare off cats, ferrets, weasels and even hawks, so they are an ideal bird to have integrated into your chicken flock as guardians. Probably the only common predator a guinea fowl can’t take on is a dog.

You’ll want to get at least two guinea fowl, up to six to start with, so you always have your own pest eradication team on patrol. Guinea fowl don’t feed in quite the same way as chickens. They like a good dust bath, but they won’t dig up garden or lawn to create one, although they will take advantage of open soil. Generally they tend to be heads down, bums up, searching for anything that moves, be it snails, slugs, caterpillars, beetles, ants, cockroaches, fleas, crickets or best of all, ticks, mice and small rats. 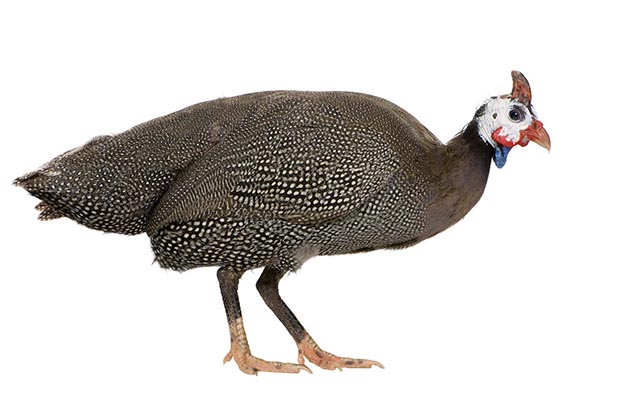 They’re also happy feasting on seeds and weeds, so you get a great all-round death-to-pests service in the one bird. They range over a much more vast area than your average chicken, so they’ll happily patrol the garden, the orchard and your pasture, and probably your neighbour’s pasture too.

The only caveat is never encourage them into your vege garden as while they’re not as vigorous in their scratching as a hen, they will damage plants, and you’ll need to keep them out of the orchard during fruit production time (or pick up your fruit very quickly). However, these protein-hungry birds probably won’t find everything they need to maintain peak condition all year round, so they will need some feed available.

3. They taste delicious (and so do their eggs)

If you can persuade a female guinea to use nesting boxes or at least areas near to the hen house, you’ll get an egg a day during the laying season (spring-summer). It’s easier to either hatch your own eggs or buy keets when they are very young so you can contain them and imprint a ‘home’ area on them, although there’s no guarantee that this will mean they lay where you want them to lay.

Otherwise you may need to watch carefully for nesting areas – females often share nests so egg numbers can quickly build up – and get to them daily. The cream-brown, sometimes speckled eggs are very thick-shelled compared to a chicken, and they’re smaller; when you’re cooking, you’d use three guinea fowl eggs in place of two chicken eggs.

The dark side of the prettiest bird: Everything to know about raising peafowl

When it comes to eating the bird, think of them as a plump chicken, with a bit more flavour, slightly gamier – closer to pheasant – which makes them a popular delicacy meat in the US and Europe. The average, full-grown adult guinea fowl weighs 1.4kg, but because of its lighter bones, it’s actually more meaty than it looks, dressing out at around 75% of its liveweight (vs 70% for a chicken). Once processed – the same as for chicken – it will provide enough to feed two people.

Its tasty dark meat is lean, low in cholesterol and rich in essential fatty acids. Ideally, you want to go for a younger bird (around 12 weeks, weighing 800g-1kg), and if you’re growing some for meat then consider containing them and feed them a protein-rich poultry pellet so it’s easier to catch and process them.

You can use almost any chicken recipe with guinea fowl. The older the bird is, the more you risk the lean meat drying out during cooking. Roasting or casserole are the best options; if you go for a roast, it will need regular basting or you can cover it with bacon to maintain moisture.

4. They take care of themselves

The frustrating thing about owning guinea fowl is their independent and very cautious nature compared to the pretty friendly nature of the chicken, but that’s also what helps make them very low maintenance birds by comparison. 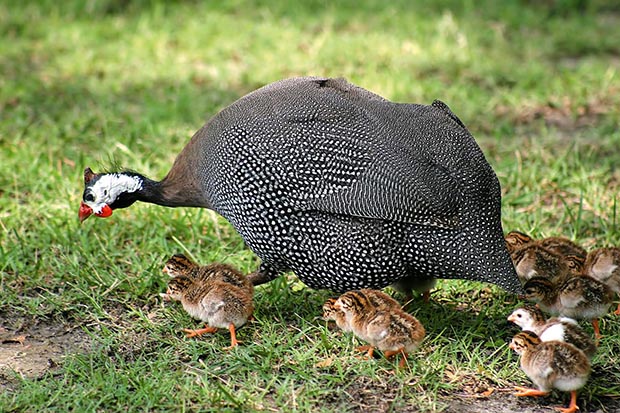 They do well in most climates (except snow), don’t tend to get sick, and rarely need worming, unless you are keeping them contained in a small area over their lifetime (not recommended unless short term in the case of birds for meat).

5. They are family birds

Guinea fowl live in family groups and pair up for life, so you have the delight of watching a growing family.

There are lots of different breeds of guinea fowl around the world, but in NZ it appears to be confined to just the one (Numida meleagris) in three basic colours, pearl, white and lavender. The most common is the spotty-looking ‘pearl’ with a dark purple-gray base and white spots. The lavender has the same markings but the base colour is a very pretty light gray-lavender. 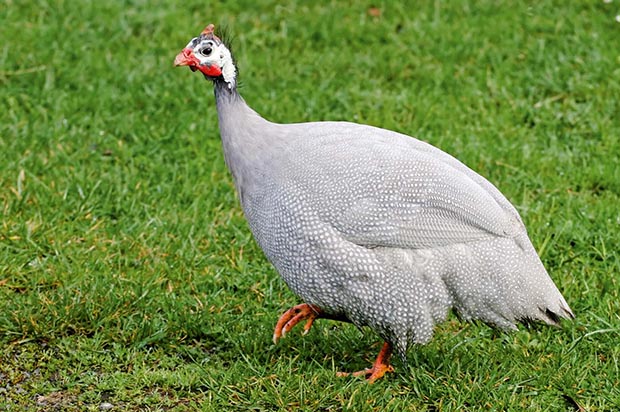 HOW TO GROW GUINEA FOWL

This isn’t as easy as you might think. For birds which are excellent at fighting off predators, they are terrible at keeping track of their young (keets) which is why a lot of people gather the fertile eggs and use a reliable broody hen or incubate the eggs.

Keets are tiny and tend to get left behind in the grass by their parents who never seem to notice just how many ‘children’ they have. Keets hatch after 26 days and are brooded in a very similar manner to chicks, but need to be fed a high protein diet: 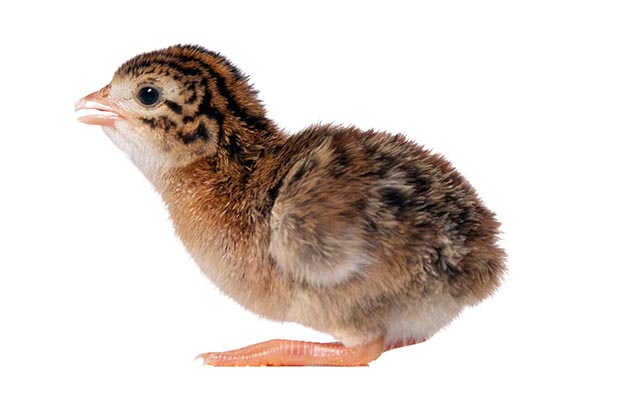 If you can’t find a feed with 18-20% protein, mix a higher protein feed with regular 16% layer feed. Good resources: www.guineas.com/articles/

5 THINGS YOU MIGHT NOT KNOW ABOUT THE GUINEA FOWL

1. Keets feel the cold so always make sure they have access to a very shallow tray of warm water (like chicks, they can easily drown), preferably sitting under or near the heat lamp so it stays warm.
2. You’ll mostly only see them running from danger, but guinea fowl are pretty good at flying. They’ll fly up to a roost in a tree, often to a height of 5m, and can fly for over 100m.
3. A good female will lay over 100 eggs a year if you are vigilant about hunting out her nesting spot or spots and gathering the eggs up daily – if you don’t, she’ll go broody, and it’s not uncommon for one hen to sit on a communal nest of up to 40 eggs.
4. One male is usually best for 4-6 females – more than that and you’ll start to get aggression and territory issues.
5. When you get your guinea fowl, keep them locked up for at least 10 weeks so they clearly understand where home is. One good tip for when you do start letting them out: only let half of them out to roam at a time, as it’s the perfect encouragement for the roaming birds to return to the noise of the flock. 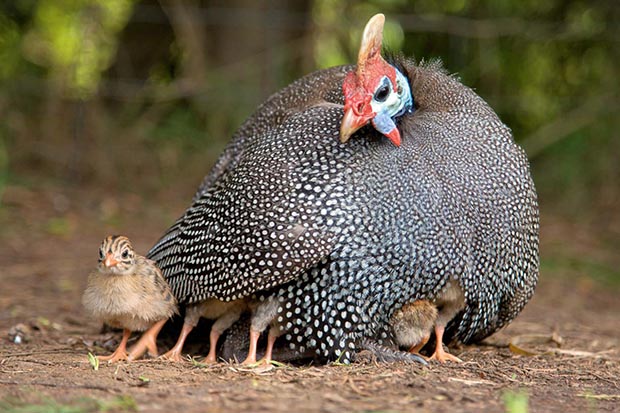 3 WAYS TO TELL THE GIRLS FROM THE BOYS

1. Boys have stronger features. Males (usually) have a larger ‘helmet’ and wattles, and the bridge across the top of the nostrils is more prominent than in females once they are fully grown, after several months.
2. Boys have one call, females have two. Both birds – but usually the males – make a single syllable sound, a very clipped cluck, but the females can also do a two syllable call. They find their voices at around Week 8.
3. Laying females have wider pelvic bones. If you can catch them, check their pelvic bones – if a peahen is laying, her pelvic bones (on either side of her vent) will be 1-1.5cm apart, whereas in a male it will be less than 1cm.

ONE MORE REASON TO HAVE GUINEA FOWL? ENTERTAINMENT

“We adore our guinea fowl. They make us laugh and they make us cry. Sometimes they seem to be smart and other times they are just plain stupid!

“They work on a ‘one brain, many bodies’ mentality, so where one goes the rest follow but that one leader is forever changing … getting confusing… well. That is guinea fowl for you!” – Fionna Appleton, Appletons Poultry, www.chooks.co.nz