The dark side of the prettiest bird: Everything to know about raising peafowl 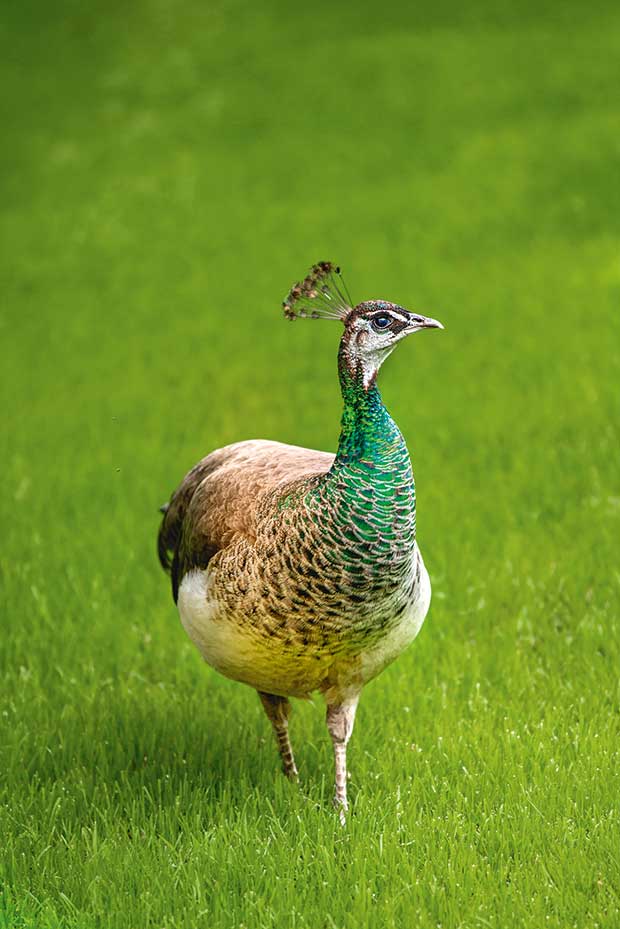 There are few things more beautiful than a peacock strutting his stuff, fanning a full, bejewelled, iridescent tail. Don’t be sucked in, says Ross Lawrenson.

If you have a large lifestyle block, some big trees, and aren’t precious about your vegetable or flower garden, then peafowl may be for you.

It’s true that one of the most beautiful things you’ll ever see is a peacock elegantly walking across your lawn or standing in a corner displaying his magnificent tail feathers (see below for more on just how amazing those tails are). 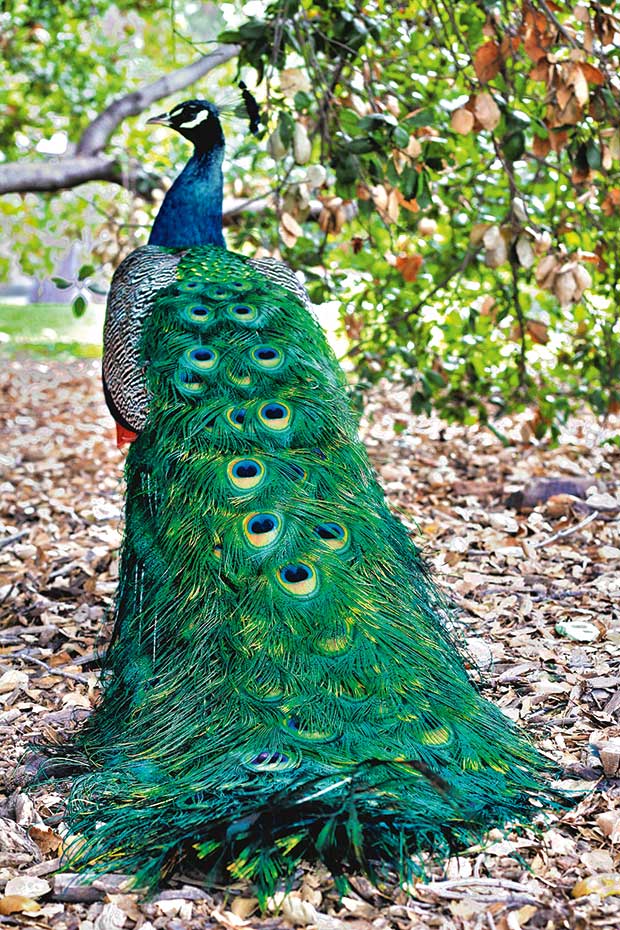 But at 5am, when there’s a peacock shrieking at 115 decibels (that’s rock concert levels) like they are being murdered outside your bedroom window, you will think of getting the gun out. Half a dozen camped outside your front door on a wet day, depositing smelly, slimy, staining black poo everywhere will try your patience.

Peafowl in the garden mean your prize blooms or vegetables can be stripped to nothing in minutes. Peafowl can be kept in large cages. The higher the cage the better, as peafowl can fly short distances and up into high trees. 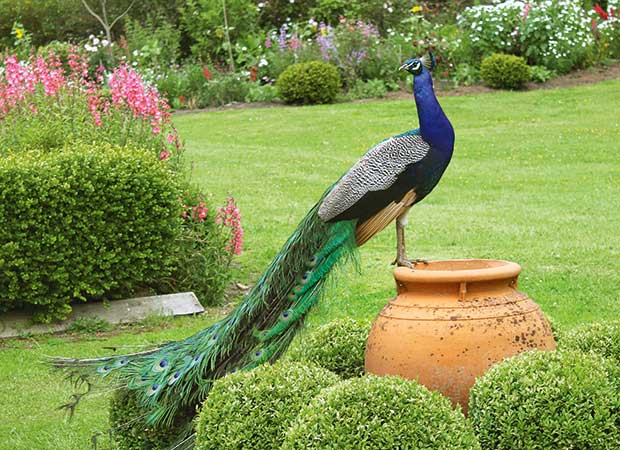 If you want them to free range around your block, their territorial qualities mean once established, they can be tamed to remain in one area. However, they do like to roam within their territory, and this may not be your legally-owned territory. The larger your property, the better.

If you have close neighbours, peafowl can be a source of tension. Ours managed to decimate a neighbour’s succulent collection one afternoon when they strayed out of their usual area.

They are also overly self-assured, even when the odds are wildly against them. This means they are in danger of being hit by cars while they stroll across the road. They are not suited to life next to a busy road. We live on a 24ha block on a quiet rural road but have still had birds injured by cars and small chicks killed. 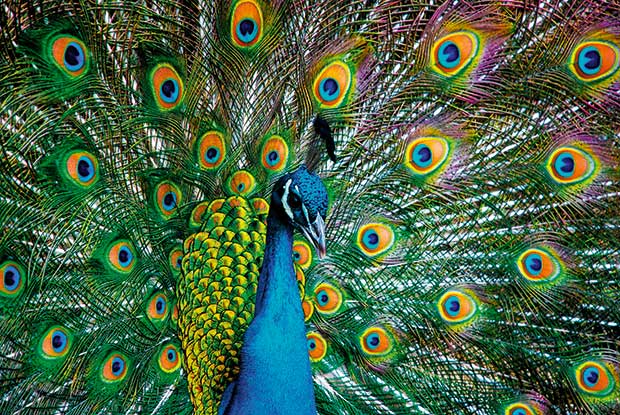 You will need at least one large tree, the peafowl’s preferred roost. If you do not have a suitable tree or trees for roosting, they will wander off to find one and that may be a problem if the one they choose is not on your land. Ours roost in a very large pine tree.

Peahen – female
Peacock – male
Chick – also known as a ‘peawee’ or a ‘peep’
A group of peafowl may be called a muster, an ostentation, or a pride

12 THINGS TO KNOW ABOUT PEAFOWL

1. There are several different types of peafowl in the world in varying colours, but the breed in NZ (Pavo cristatus, the Indian or ‘blue’ peafowl) originates from India.

2. Peafowl are part of the pheasant family. 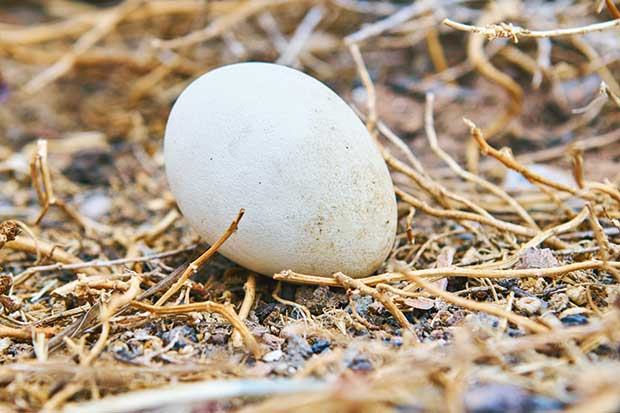 5. They were first brought to New Zealand in 1843 as pets. There are now established flocks living wild in many parts of NZ including Kaipara, Auckland, Waikato, Hawkes Bay, Gisborne, Whanganui, Nelson, Marlborough and Canterbury. 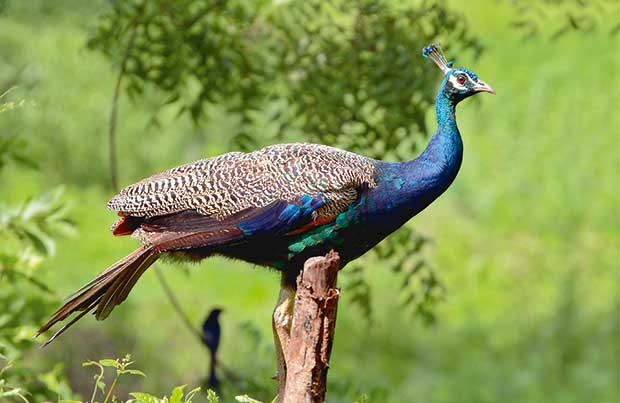 6. They prefer a warm climate but will tolerate cold and have adapted to life in zoos and parks right around the temperate world.

7. They are a forest bird that roost in large trees but spend most of their time foraging on the ground. In the wild they live near forest edges and in clearings.

8. Males live alone, females in small groups. However, bird spotters in NZ have seen groups of up to 100 wild birds at a time moving together over winter and early spring. 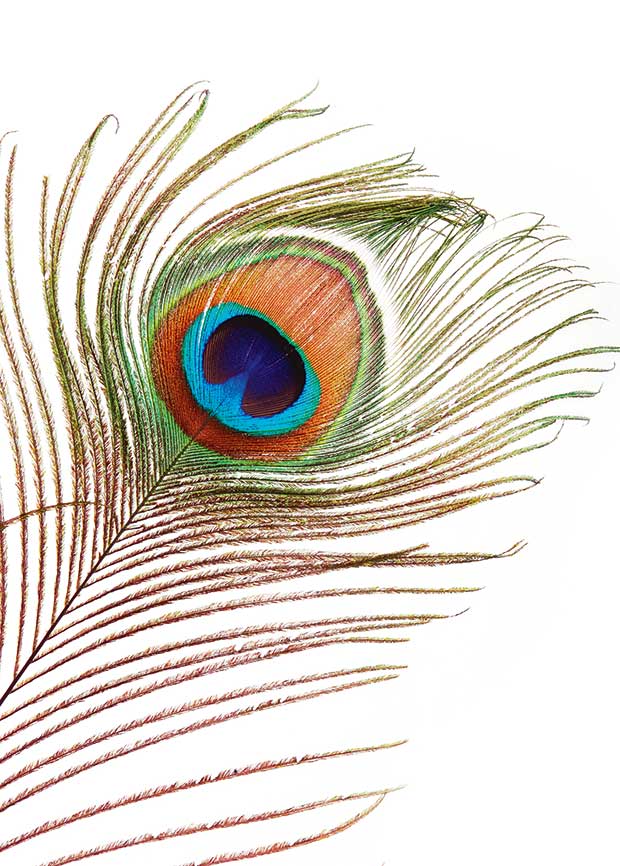 9. They eat a diet of mainly plants and seeds, but will also eat insects like crickets, ticks and cicadas, and small animals like mice and lizards.

10. Peafowl in a domestic situation can be easily tamed (best done when chicks) and can be quite friendly birds, but wild ones tend to be very wary.

11. You can eat peafowl but it depends on who you talk to as to whether it’s recommended – it’s typically a dry, tough meat, even after long cooking due to the lack of fat in the breast meat. The best bet if you want to eat them is to choose young, grain-fed birds that have been kept in a run, vs free-ranging. 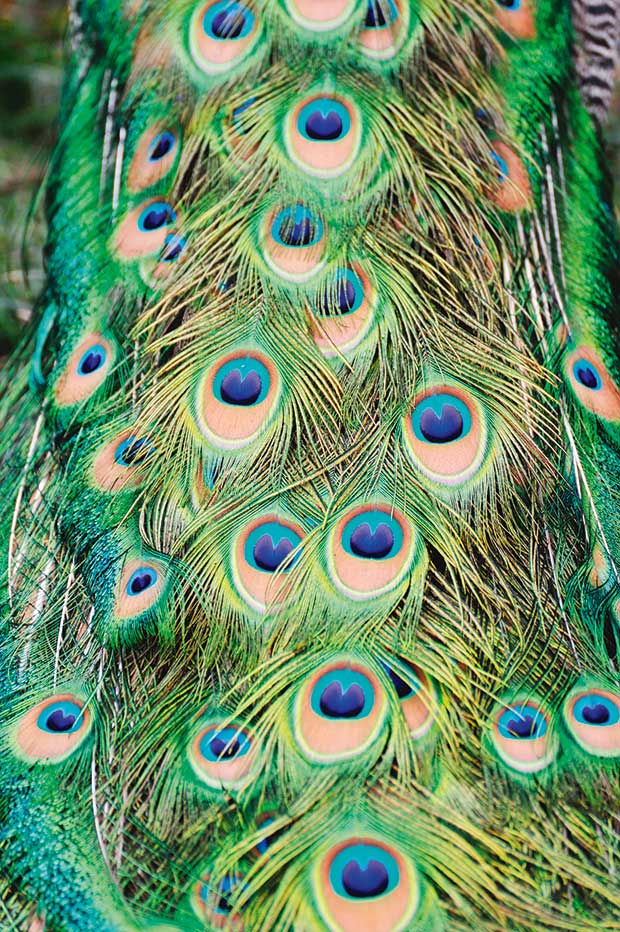 12.The eggs are about three times the size of a hen’s egg and are said to have a gamey flavour but can be eaten. However, a peahen will only lay a small clutch of 4-6 eggs once a year. To get more, you need to remove the eggs each day, which will encourage them to continue laying for up to a month.

Peafowl can live for up to 20 years so they are not a short-term pet.

The staple food we feed out to our peafowl is wheat or kibbled maize. Ours also love raisins – if you need to entice them to go somewhere, this is often the best bait. They love wet bread too, although this just helps them put on fat and we use it as a treat food only. 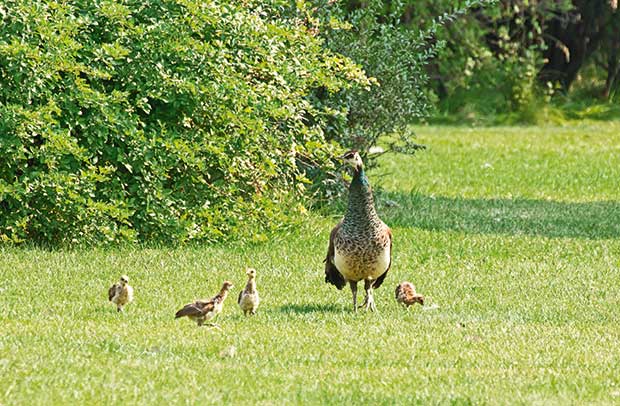 They will also eat fruit. Friends on Waiheke once owned a vineyard called Peacock’s Ridge, named for the wild peafowl which were a major problem as the grapes ripened. In our garden, all of our strawberries and raspberries have to be covered or we lose the lot.

More stories you might like:
Chook Patrol: The toxic mistakes you may be making with your poultry

Chicks need a feed that is 30% protein. We feed ours on a mixture of chick starter mash and dog roll, with a little wet bread. As they get a bit bigger we add wheat to the mix. 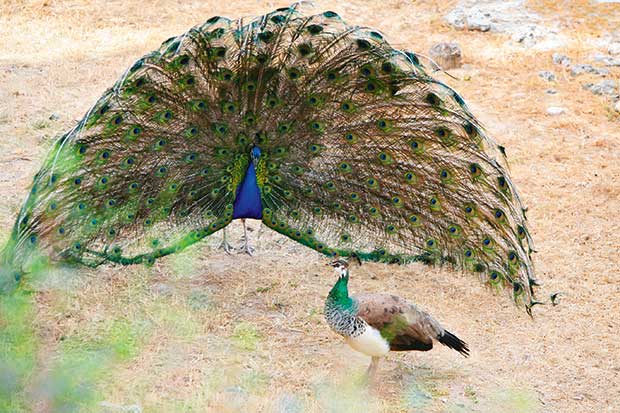 After about three months they progress to wheat only and foraging around the farm eating up insects and herbage.

A peacock will see off a cat and can intimidate a dog, although a large dog is probably the biggest threat to peafowl if they do not fly off quickly. Our other problem has been neighbours out ‘possum’ hunting who have decided to take out some of our roosting peafowl. 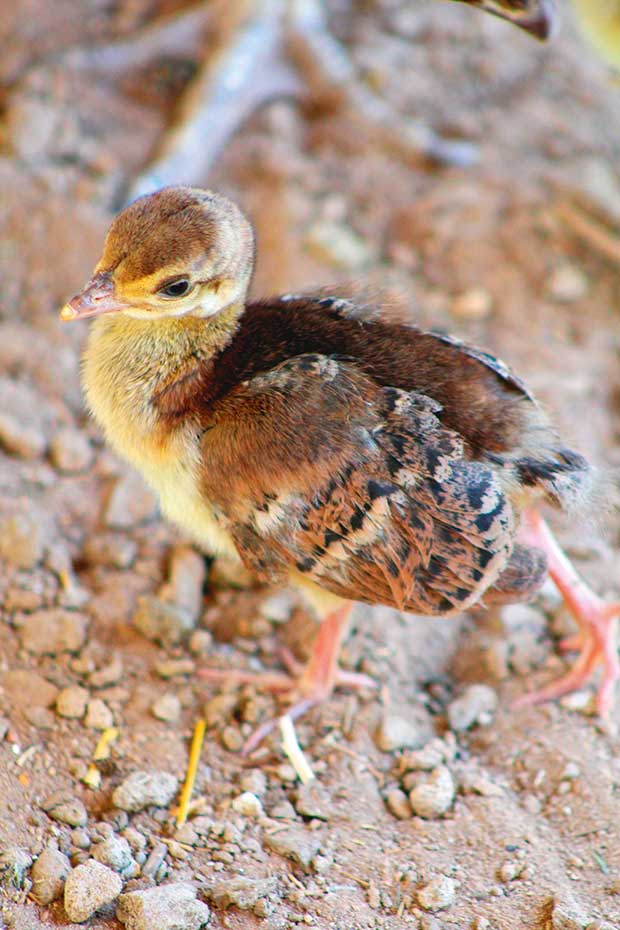 Ideally, keep them away from roads in an area with no straying dogs, and no threats from ‘hunters’.

Use a gamebird feed if available in your area, or alternatively a high protein (19-20%) poultry feed. If neither is an option, provide Layer crumbs (17-18%) and extra protein like dog roll.

COLOURS OF THE BIRD

The regular blue-hued peafowl is the most common colour you’ll see, but Pavo cristatus also comes in pure to off-white. Others are darker, almost black in colour. Some peafowl will be a basic blue colour but with patches of white. 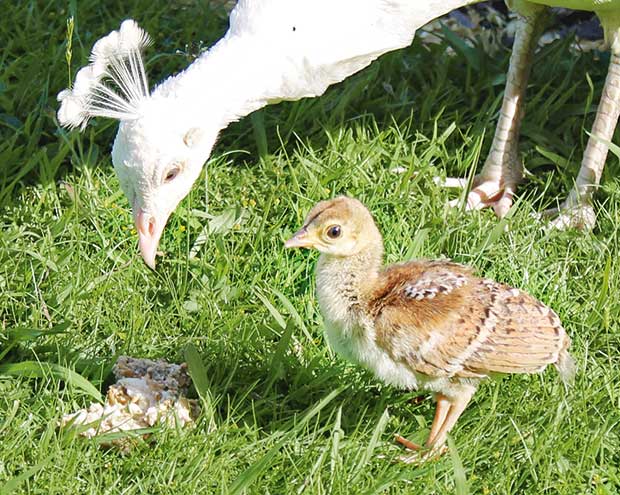 White peacocks (Pavo cristatus mut. alba) are not albino, but rather a variation of the blue peacock created by a genetic mutation. White peacocks have white plumage, blue eyes and can mate to create white offspring. If a normal-coloured peafowl is carrying the white gene then its wing coverlets will be white. 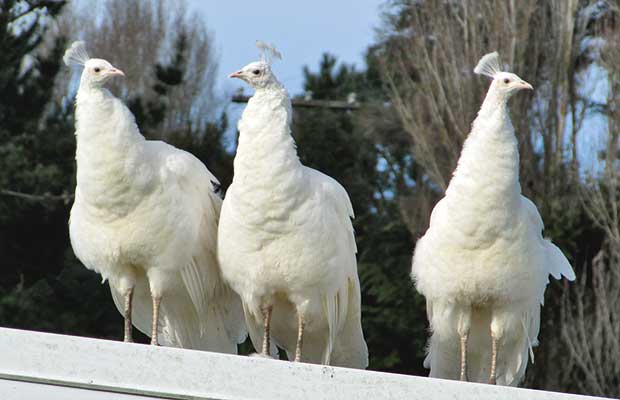 Peahens are far duller than peacocks. Most are brown with a little green-blue colour on their neck.