On a road trip to the Golden Shears in the new Holden Colorado, Kelly Gillbanks discovers it takes a lot of guts and determination to be a top shearer. It’s a good thing she’s driving the truck of champions.

She’s a bit hairy that road through the Remutakas, snaking across the range that divides Wellington’s Hutt Valley from the Wairarapa Plains. The cliffs are steep, and the corners (some of which have a recommended speed of 35kmph) are bite-your-lip tight. But the mountain range is a beaut, especially from the comfort of the Holden Colorado truck powered by a grunty 2.8-litre engine, electric power steering — and some girl power (me!) behind the wheel.

I’m with a couple of girlfriends on a women-only road trip to the Golden Shears, New Zealand’s annual shearing and wool-handling competition. The three-day event in the country’s sheep capital, Masterton, is the big shindig of the sheep industry with shearers travelling from all parts of the country to compete. 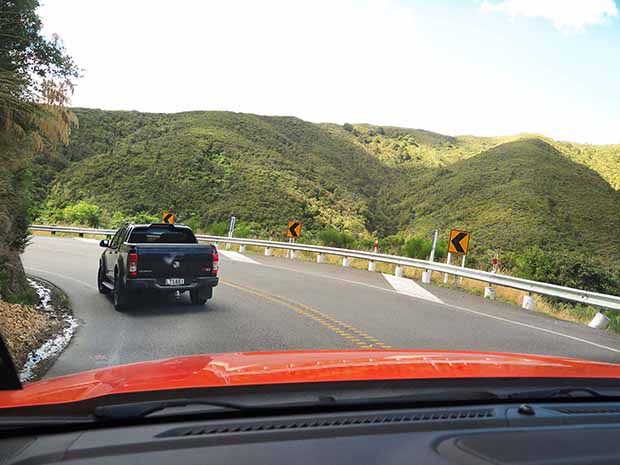 We’re taking the scenic route to Masterton with a detour to Lake Ferry (via Featherston) and Martinborough, with sheer cliffs to drive past, lambs to meet, and whitebait to eat. 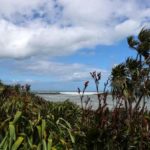 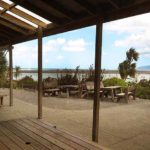 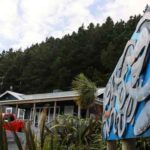 After two-hours of conquering the ranges, The Lake Ferry Hotel is an ideal spot in which to revel while overlooking the mountains and devouring whitebait – locally caught, of course. The quiet shores of Lake Ōnoke, where the lake empties into Palliser Bay, has been the site of a hotel since 1851 when the land route into the Wairarapa traversed the coast from Wellington, with a ferry ride over Lake Ōnoke. The hotel was built to accommodate the ferryman.

Today’s hotel was built in 1919. The small settlement is still a favourite holiday spot and, in the offseason, home to 50 permanent residents and many bird species. The beach and dunes are nesting grounds for endangered banded dotterel and Caspian tern.

DO THE HOKEY-POKEY IN MARTINBOROUGH 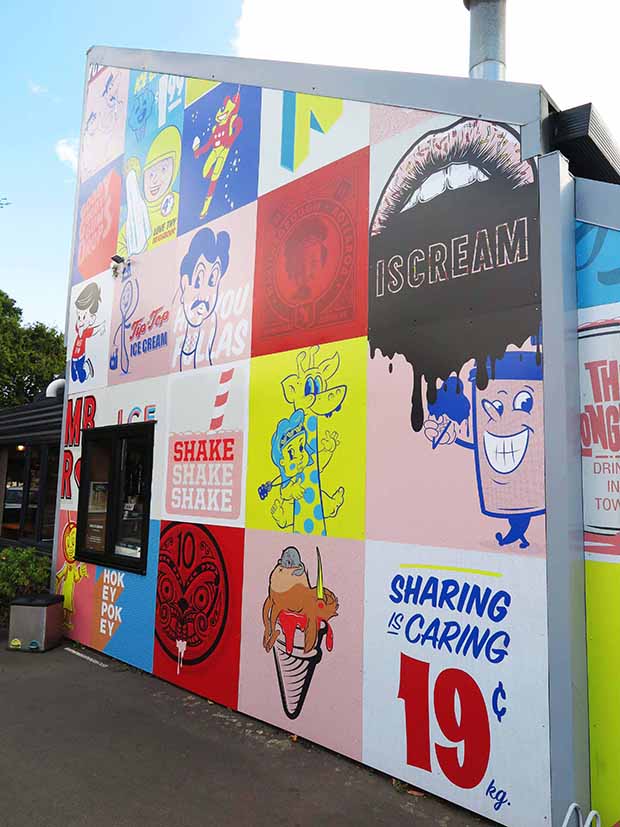 It’s famous for its wine, but the coffee in Martinborough also deserves credit. A quick cuppa at Neighbourhood Coffee House on Memorial Square provides a much-needed caffeine hit, and we’d better hit the road again soon before the café’s Kiwiana mural has me craving spaceman lollies and hokey-pokey ice cream.

GET FLEECED IN MASTERTON 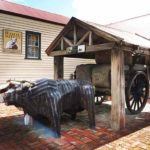 A bullock dray built circa 1900. This dray was used to transport the annual wool clip to Castlepoint. 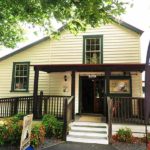 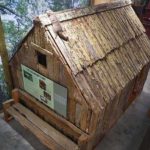 A bushman’s hut from Ihuraua built circa 1890. 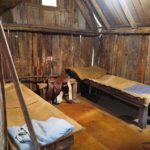 The simple shack had two stretcher beds and a billy.

Before our visit to the Golden Shears, we brush up on the history of New Zealand’s sheep industry at The Wool Shed Museum in Masterton. Shearing is hard enough yakka today, but sheep farming was even harder in the 19th century before electric shears.

A historical bushman’s hut, shipped into the museum from its original setting on a 650-hectare farm at Ihuraua, reveals just how tough farming life was. The hut has two stretcher beds, a fireplace, and a billy but would have been welcome shelter from southerly winds.

At the museum, I also pick up some sheep jargon. A “narler”, I learn, is a difficult-to-shear sheep; a “long blow” is a sweeping run of the shearing handpiece along a sheep’s back; a “snob” is the last sheep left in a pen, often in poor nick; and “plum jams” is rhyming slang for lambs. Surely, I’ve learned enough to impress two stars from the sheep shearing world, Emily and Sam Welch? 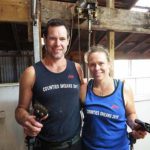 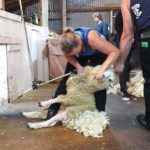 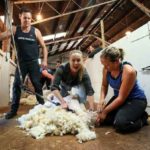 Kelly gives it a crack. 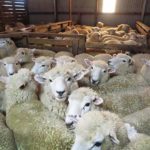 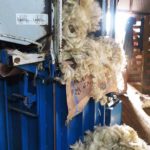 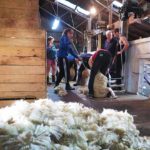 Day two of the Golden Shears and we wind up the windows of the Colorado to drive a dusty gravel backroad to a nearby farm. I’m here to get some tips from champion shearer and star of the 2018 documentary She Shears, Emily Welch. Emily knows a thing or two about sheep: she holds the women’s world record for lamb shearing (648 lambs in nine hours). Her husband Sam is “not bad” either – he has placed in the top 40 of the Golden Shears several times. The couple, from Waikaretu near Port Waikato, are visiting the woolshed for a warm-up for Emily’s big competition later in the day. 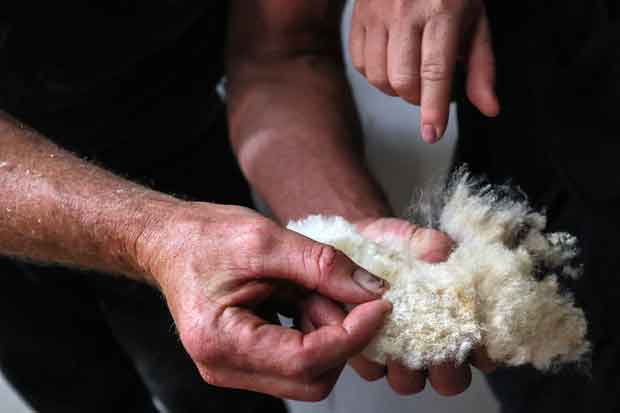 The couple shows us the Godfrey Bowen technique; in which a sheep is rested on one buttock, off its tailbone, to prevent it from wriggling. They shear a sheep in two shakes of a lamb’s tail then insist I give it go. I might just be the slowest sheep shearer on record. 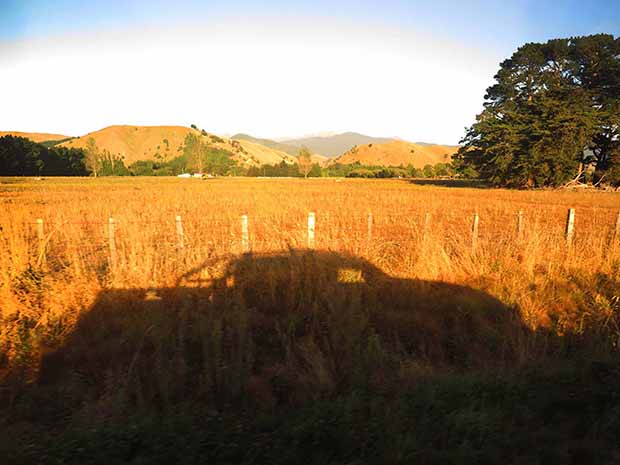 After I’m finished, they tell me it’s not customary to name each sheep before shearing, nor is it correct to give it a congratulatory pat at the end (although I’m convinced Larry the ewe appreciated it).

Training for the Golden Shears is serious business. Emily and Sam work on their aerobic fitness by cycling, running and weight lifting, but they say champion technique comes from practicing with the shearing handpiece.

More stories you might like:
A roadtrip across the USA exploring Yosemite, Zion and Gunnison National Parks 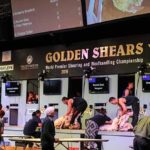 Day 2 of the Golden Shears. 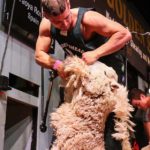 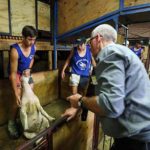 Sheep are judged backstage. Points are deducted for nicks and imperfections. 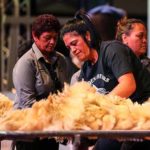 A wool handler sorts the wool. 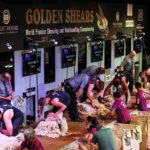 The event has been held in Masterton’s War Memorial Stadium since 1961. 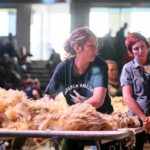 Wool handling has been part of the competition since 1985. 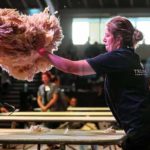 Wool handlers are graded on their throw of the wool.

The Golden Shears is the world’s premier shearing event. This year was the competition’s 59th, and the place is buzzing with energy. Colourful commentary blasts through the arena’s speakers.

Women compete alongside men on the main stage. Emily enjoys the challenge of shearing against the blokes. “I’m competing in the open shearing competition, and everyone is my competitor. We’re all competing against each other, and I enjoy it.”

Shearers are scored on their speed and accuracy, with points deducted for nicks or uneven strokes of the handpiece. The atmosphere is supportive, the crowd cheering with just as much enthusiasm for the slower shearers as they do for the fastest competitors. There are lots of cries from the crowd of “you can do it” and “you’re almost there”.

The fastest shearer does not necessarily receive first place. In one heat, a female competitor has the slowest time but scores well because of her accuracy and skill.

This year, for the first time, the competition features a separate women’s event where the six of the best-performing women in Golden Shears open, senior and intermediate heats compete in an all-women final.

Emily wins. She hopes the competition is the first step towards establishing a women’s world title.

The one-and-a-half-hour drive back from wool country to Wellington is smooth. The “narler” Remutakas are no match for me now that I’m empowered with a little “shear” determination. When we reach the city centre, I’m expecting my truck will stand out like a sore thumb alongside the corporate cars of the capital’s politicians. However, the Colorado is so luxurious that I notice a few envious glances from a bunch of Beehive bureaucrats. Perhaps they are also eager for a country escape? 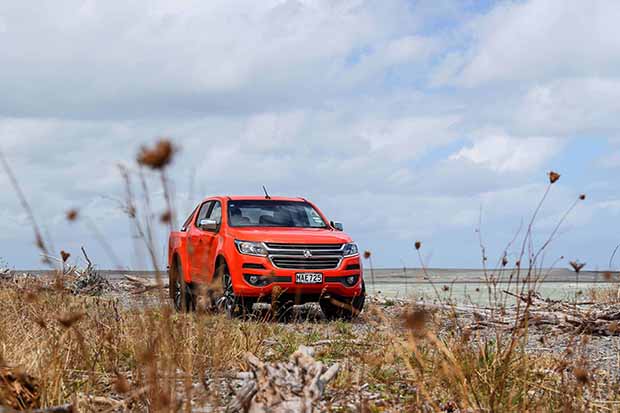 Colorado LTZ takes lifestyle vehicles to a whole new level. Here, Apple CarPlay ® and Android ® Auto technology are enhanced with features like Forward Collision Alert with Head Up Warning and Lane Departure Warning to ensure your safety is the top priority. Colorado LTZ also gives you the convenience of Remote Start + and a more refined interior with an 8-inch LTZ In Dark Shadow colour touch-screen and embedded Sat Nav. On the outside, 18-inch alloy wheels and an alloy sports bar complete the stylish look. With 3.5-tonne towing and 500Nm + of torque, this is all the power you need, combined with all the features you want to get the most out of life. 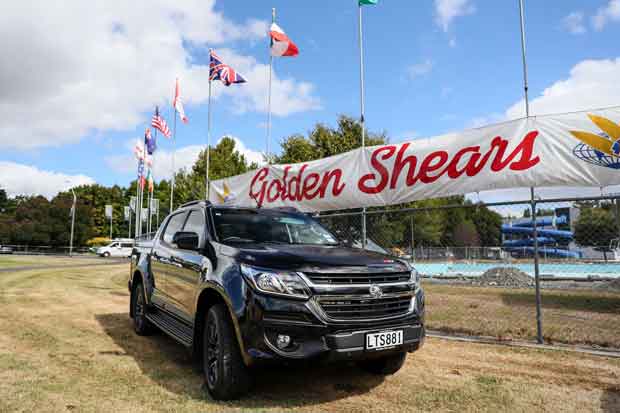 A road trip to remember: Driving from Dunedin to Queenstown in the next generation Holden Commodore