A voyage on the high seas inspired an entrepreneurial couple to create a marine tracking system for boaties.

The final race of the 2017 America’s Cup was a cat ’n’ mouse game of tacks and gybes between Emirates Team New Zealand and Oracle. But as Peter Burling and his crew rocketed towards the finish line, another line was being defended behind the scenes.

Hundreds of spectator boats were on the water of Great Sound, Bermuda, watching the action, and the chances of an overzealous fizz boat driver or an overly keen keeler skipper crossing into the path of the racing catamarans was high.

AIS stands for Automatic Identification System, which is a marine tracking system that uses vessel transponders. While the Guardian virtual beacons, used for protecting underwater assets such as electricity cables and pipelines, are now a big part of Vesper Marine’s business, the company got its start producing AIS devices for recreational and smaller commercial boats.

Vesper Marine is a global leader in AIS, and its AIS device WatchMate is the most highly rated safety device for recreational boats, with numerous international innovation awards. 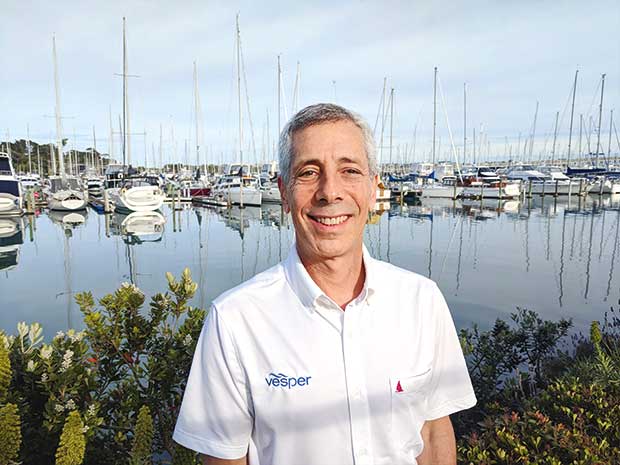 The idea came to Jeff Robbins and his wife Deirdre Schleigh in 2001 during a four-year voyage on a yacht called Vesper from Seattle and around the Pacific Ocean to New Zealand.

“It was just the two of us out in the middle of the ocean, and the big concern was the risk of collisions with ships, particularly at night. When you have a crew of two, one always has to be on watch, and we would have loved the additional safety of a device that alerted us to a potential collision,” says Jeff.

When they arrived in New Zealand in 2005 the couple, who hail from Seattle, decided to make Auckland their permanent home. Both Deidre and Jeff have a background in technology, and they began tinkering with a home-made AIS device, unheard of for recreational boats, that would later become WatchMate, now deployed on thousands of boats in more than 30 countries.

Since launching in 2007, Jeff, Deirdre and their co-founder Carl Omundsen, a Christchurch-based electronics engineer, have grown Vesper Marine to 30 employees, 25 in its Freeman’s Bay headquarters. The software and hardware for both WatchMate and Guardian are designed and developed here. 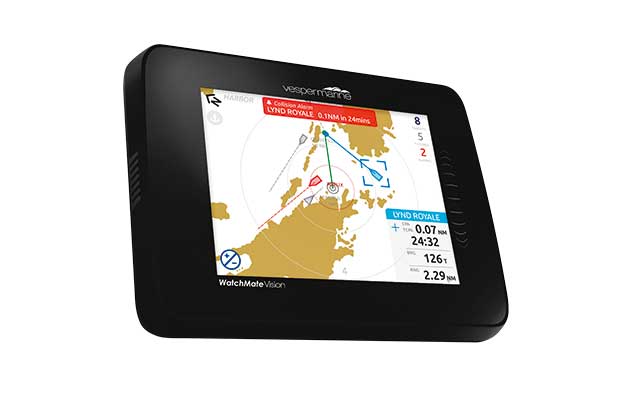 Guardian technology is used to protect multimillion dollar underwater assets such as subsea high-voltage electricity cables in Long Island Sound and oil pipelines in Michigan’s Straits of Mackinac from damage from anchors.

Guardian was used to place virtual buoys around a shipwreck in the Singapore Strait in 2017, and its proactive software analyzed the movements of 2500 vessels per day to determine if they might hit the sunken ship. During the nine-month salvage operation of the shipwreck, 8250 vessels were alerted of the danger, and as a result, there were no collisions.

While most large commercial vessels are equipped with AIS systems, there is growing demand from recreational and small commercial craft for equipment that signals position and course.

Standard AIS systems simply send and receive data, but the Vesper Marine WatchMate is an active safety system that alerts captains of potential collisions, plots anchor position and alerts if an anchor drags.

It also sends an alarm if a there is a person overboard.

Since 2007, several other companies have also entered the AIS market. To remain a market leader, Vesper Marine must continue to innovate and invest in research and development, which requires extensive funding.

Vesper Marine’s involvement in high profile events such as the America’s Cup races in Bermuda and San Francisco and the Volvo Ocean Race, along with customers like the New York Power Authority, the largest state public power company in the States, has helped attract new customers.

In 2019, Vesper Marine will launch several products built on a new technology platform three years in the making.

“When you are working on projects, it’s easy to get consumed by what’s wrong and with solving problems. It’s important to also focus on why you exist as a company. For me, it’s the emails we receive from boaters all over the world who say our WatchMate saved their life. It reminds me of why I’m in this business.”

THE NUMBERS
85% growth year-on-year
90% of sales are exports
50% of sales in the States
30 staff
$220,000 of research grants from Callaghan Innovation
8250 vessel alerts to prevent collisions after a shipwreck in the Singapore Strait