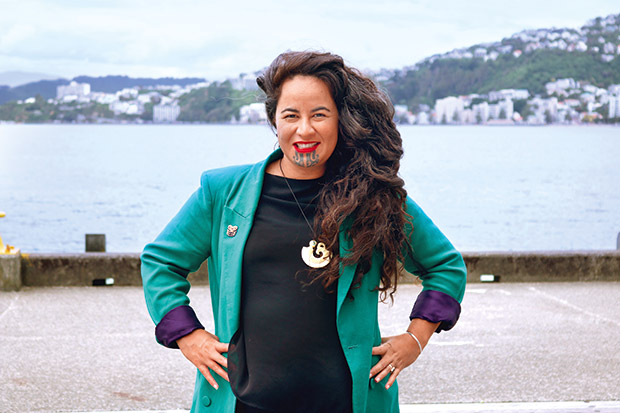 Julia Whaipooti never shies from being an agent of change, whether speaking at the United Nations or fighting for equality and equity within Aotearoa’s justice system.

“My whānau is Ngāti Porou from the East Coast. We moved to Australia when I was three before shifting to Blenheim to finish school. My mum was committed to us doing well; she would drill it into us. ‘Can you grab some milk? Oh, and you’re going to university.'”

“Julia was an all-rounder, excelling at sport, academia and socially. But she became increasingly aware that her success came with a label: she was the “Māori student”.

Further education was always the plan, but there were barriers. “I was the first of my whānau to go to university, but there was a lot of pressure, and I was scared — I didn’t know how to get there. I didn’t want to spend money I didn’t have, so I took a full-time job at a supermarket to save and work it out.”

When Julia mentioned to a regular customer at the supermarket that she was moving to a new role at Mitre 10, the customer — a lawyer at one of the biggest local firms — intervened. “She said, ‘No, you’re not; you’re coming to work with me.’” I called her after my first shift, and she offered me a job as a legal secretary.”

But her legal career didn’t end there, and Julia eventually moved to Wellington to study law. There, she was one of few Māori students, required to sit in lectures that covered issues such as, ‘Why Māori are more likely to be criminals.’

She joined advocacy group JustSpeak, turning her anger into action. “Advocacy against our stupid and archaic system became my mahi, and law school my side job.”

2013 The complexities of justice

Julia worked as a community lawyer, often supporting those leaving prison. Again, she felt increasing anger at a failing system. “Fathers leaving prison would instantly have IRD waiting for them with years of missed payments and late fees. They would be in trouble again before they were even out.”

The endless cycle took a toll, and Julia found herself frustrated and discouraged. “No matter what I did, there was always more. I felt myself becoming hardened, and I didn’t want to work to survive. I had to stop.”

In 2017, she was offered a job as senior advisor to the Office of the Children’s Commissioner. “Its goal of advocating for young people and improving outcomes for Māori aligned with mine.”

2018 Taking on the United Nations

“The expansion played right into the ‘criminals are bad, lock them up’ mentality. It looked like the new Labour government would go ahead with it, so when given a chance to lead the Māori delegation to the United Nations in 2018, I saw an opportunity to dob in the government on an international stage.

There are limited spaces to speak, so I hustled hard, ran across New York City and talked for three minutes on the systemic racism within New Zealand’s criminal and justice system and the failure of building a billion-dollar mega-prison. It went viral, and they eventually backtracked on the decision.”

Julia continues to support various causes, determined to take a seat at tables where Māori are under-represented. She’s on the New Zealand Drug Foundation board and has sat on several advisory councils — including the Human Rights Commission.

“The experts of change are those with lived experience, so how can we have people making decisions and writing policy when they’re not engaged?” Fighting against injustice has become her life’s work, and a step into politics seems inevitable (and predetermined — Whaipooti means “chase votes”).

In the short term, Julia and her wife Emma will have their first child early this year, fueling her drive for change even further. “I don’t want this to be their problem or their reality. Change isn’t for me — I’ll die eventually. It’s for the future.”

First on Julia’s list of to-dos is to remove “hundreds of office chairs from Wellington and get the people, and money, on the ground”. It costs approximately $120,000 to keep someone in jail for a year, she says, but nowhere near enough is being spent on keeping people out.

Say yes — often. “One day you’ll learn to say no. But you discover what you don’t want to do by doing it. Open your eyes and give everything a go.”

Look who is at the table. “Always look at who is making decisions, especially with social issues and areas of change. Change doesn’t always come from white men in suits.”

Know ‘why’. “Don’t let money be your driver. If you have the privilege to work for reasons other than money, then know your why. Be clear about why you work, and reassess it often. If your job isn’t fulfilling the why, then change the position, not the other way around.”