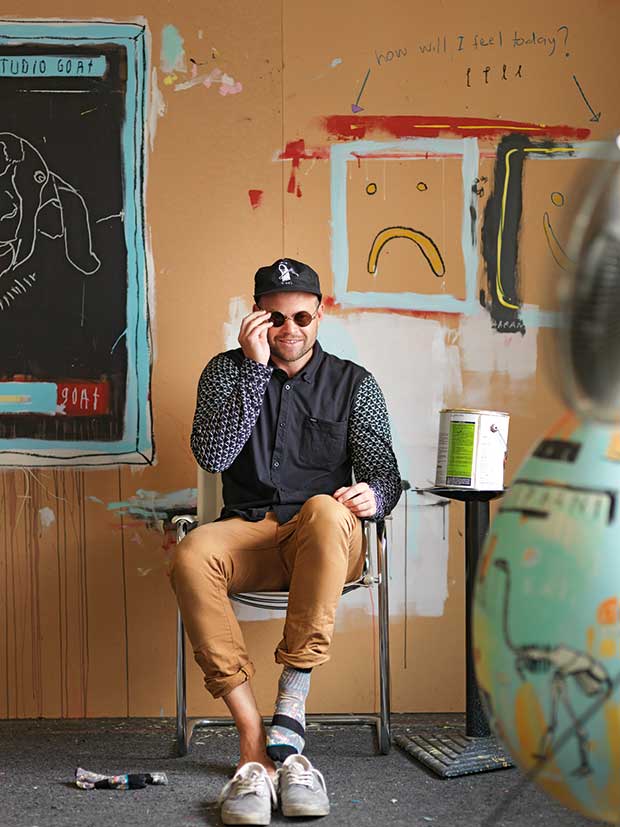 When Sam Mathers was two years old he sneaked into the van of a painter working at the family home, upended the paint tins and smeared the contents all over the vehicle. It was one of his first artworks and there may be a painter out there regretting his haste in removing the evidence.

Now 29, Sam still frequently draws on the walls of his Auckland studio – but does have the owner’s permission. His love of art developed at school and took hold after he earned a scholarship to the Bachelor of Media Arts programme at WinTec in Hamilton. 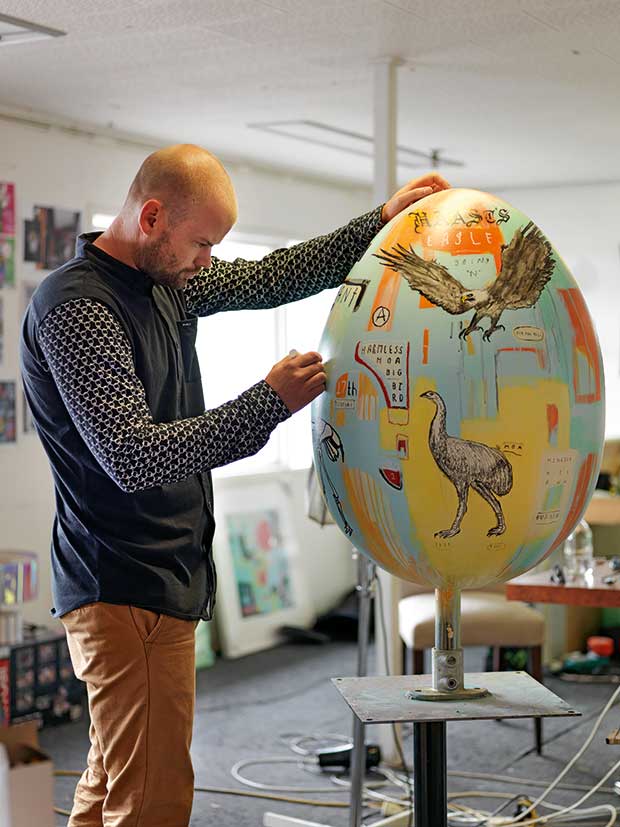 Sam at work on his contribution to the Whittaker’s Big Egg Hunt fund-raising effort last Easter.

“It was a good choice as it gave me a chance to try everything: painting, film, illustration. I majored in graphic design and art which taught me the basics but I’m not a traditional painter. I tried to be when I was younger but my skies would be purple and pink instead of blue.”

After graduating, Sam focused on freelance design work and painted only when commissioned. In 2009 he went to London and found himself moving the early works of Picasso and Princess Diana’s childhood furniture, courtesy of a removal job at Sotheby’s. 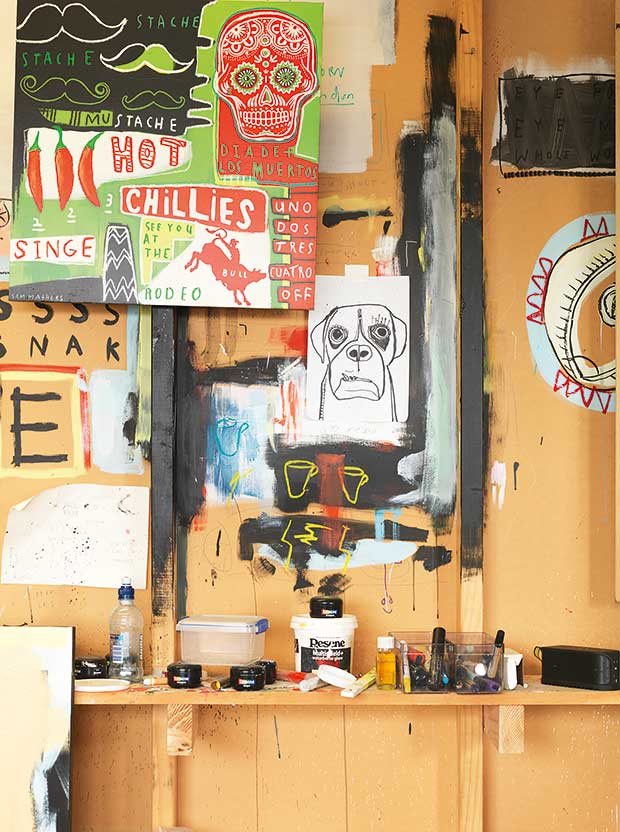 On his return to New Zealand in 2010 (and due to the lack of graphic design jobs on offer), he set up a studio at his parents’ home in Raglan and began to paint.

His last attempt at a nine-to-five job in graphic design went down the drain with a salary offer that wouldn’t even pay Auckland rent. In frustration, he walked into Mobile Art Gallery in Mt Eden, showed them a recent painting and asked what they thought.

That was the end of the graphic-design career and the beginning of Sam Mathers, full-time artist. 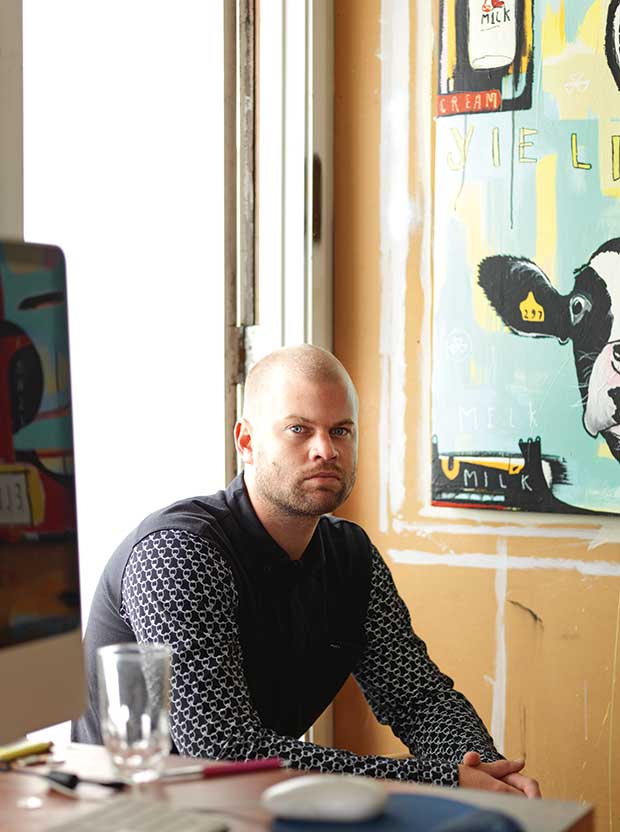 “A lot of people began to see my work. The Art Director for Saatchi & Saatchi in New York had just moved to Auckland, saw some of my paintings and commissioned a mural for their Auckland creative department. About the same time I held an exhibition in Auckland which went really well and then the NewSchool of Architecture & Design flew me to San Diego to do a large painting for them. That was an experience!

“They flew me over for 12 days to do this painting that was displayed at the opening of their new building and just said: ‘Paint whatever you want’. It was Hallowe’en so I was inspired by that and it ended up being one of the best-fun painting jobs I have ever had.”

Following a sell-out show with Soul Gallery in Hamilton, and despite his attachment to Raglan and the surf, Sam made the move to Auckland and an empty space in a furniture factory.

“Owner Matt Smitt purchased a piece of my art and offered studio space in his partially empty warehouse. If I didn’t have this room I might not be painting; it’s hard and expensive to get a big-enough space. I’ve given Matt one of my pieces in return so it works well for both of us.”

More stories you might like:
Ōamaru's op-shop queen Anna Easton has a story behind every thrifted treasure in her home

The success of his work is both friend and foe to Sam. The constant pressure of exhibitions and commissions that allows him to be a full-time artist also creates a demand that can be hard to fill. 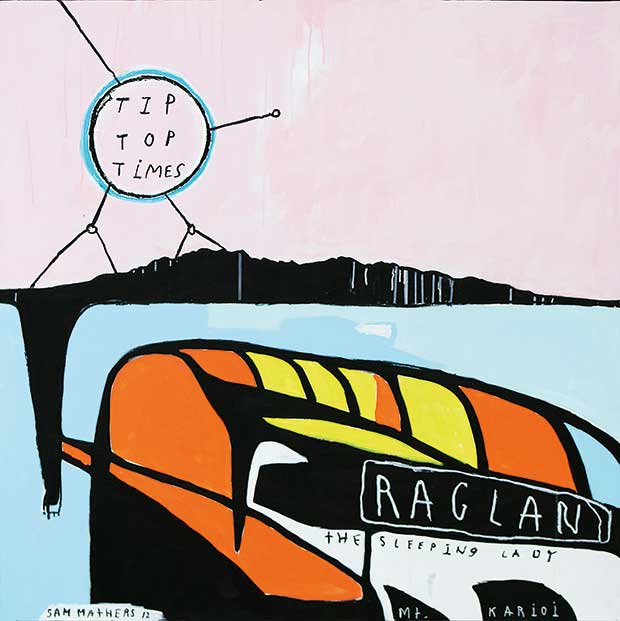 “I dropped off a canvas at the Parnell Gallery but by the time I had walked to the car park they had phoned to say it had sold without even being taken out of the bubble wrap. Another time I had made a mistake and crossed it out. Someone saw it, said, ‘Stop painting,’ and bought it on the spot.” Although Raglan will always be home, Sam’s sights are set further afield. “It’s easier in New Zealand when it comes to making it big but in the end you can’t just be famous in New Zealand – you have to be known worldwide. I don’t want to rush the process; I just have to wait and be proactive. I want it really badly.”

Family thoughts: “Mum thought I should keep doing design and not waste the design degree. My parents knew I was good and that I should keep going with it.”
Fresh perspectives: “Inspiration comes from having a good time and enjoying life… getting away and seeing different places, seeing different things. You feel renewed, I have to have a break from the studio.”
Being on show: “An exhibition takes about six months to prepare for, that’s with about 15 large paintings and a few small.”
Feeling inspired:  “Cy Twombly (messy and colourful), Jean-Michel Basquiat, Andy Warhol and Kiwi artist Chris Heaphy have all inspired me at some point.”
The nine-to-five grind: “For me, painting is better than being at a computer all day. My friends and family know it’s a real job though there are always some people who call you asking what you’re doing in the middle of the day. My answer is always: “Working”.

More stories you might like:
Home delivery drinks business the Cocktail Collective is shaking up the party