‘How e-scooters, macaroni cheese and a kowhai helped me save 3.4 tonnes of carbon’: Emma Rawson tackles her carbon footprint with the FutureFit calculator

This is an extract from our new special edition, Sustainability Through the Seasons, . This special edition practical guide to living a greener and more environmentally friendly life 365 days of the year.Order now.

Three minutes into my first e-scooter commute, I receive a wallop to the face. The smackdown comes from the branch of an overgrown hedge encroaching, quite rudely, on the footpath. Perhaps the botanical slap is karma? Just yesterday, I’d measured my carbon footprint using the online FutureFit calculator.

Before sitting the test, I’d imagined myself to be quite the environmental Goodie-Two-Shoes. I live in a small townhouse. I grow some of my food (this year waaay too much silverbeet and mustard greens), and I’m a compost obsessive. (I have two separate bins and experiment with compostable plastic with varying success.) 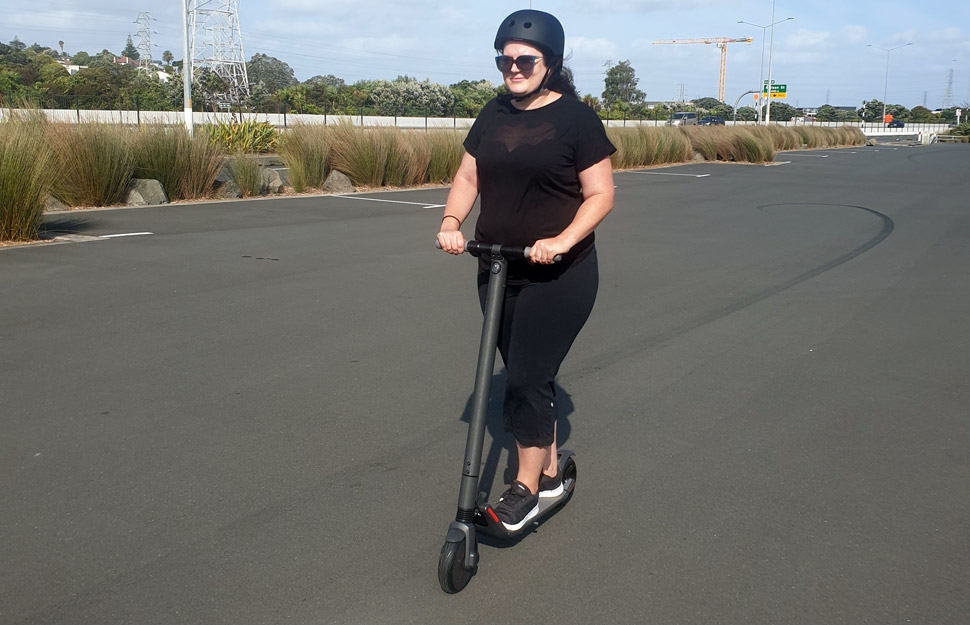 My commute is a mere 5.4km (short by Auckland standards). I drive a tiny car and carpool with my partner Andrew to work. On the waste side of things, I compost the office’s food scraps, and I’ve become the workplace recycling officer, patrolling the bins for incorrectly recycled trash like Hercule Poirot inspecting a crime scene. Exhibit A: My reusable ceramic cup.

The FutureFit.nz carbon footprint tool, an Auckland Council initiative, measures the impact New Zealanders have on the planet with questions on weekly transport, food consumption, power usage and rubbish and recycling. The first time I did the survey, it calculated I had produced 8.5 tonnes of carbon emissions in the previous 12 months — the national average is six.

What was that noise? It was the clank of my aluminium environmental halo falling to the floor, missing the recycling bin. It got worse; I realized I’d forgotten to calculate the return leg of a domestic flight and an international trip to Vanuatu last August. My carbon footprint shot up to 9.65 tonnes (about the weight of four elephants). 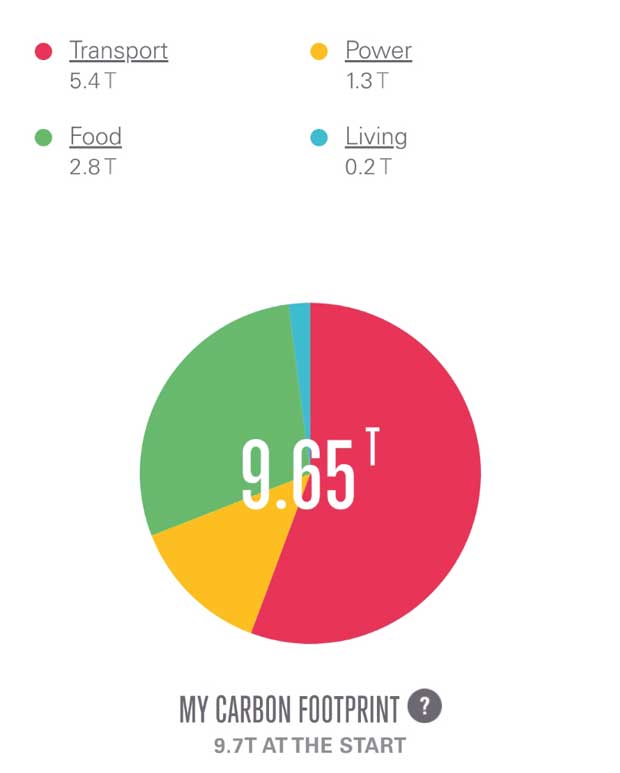 What does one tonne of carbon emissions look like? In 2009, the United Nations created an art installation called The CO₂ Cube. The one-tonne cube of carbon dioxide was the volume of a three-storey building of 8.2m x 8.2m x 8.2m. (To be technical, that’s one tonne of gas measured and stored at standard atmospheric pressure.) 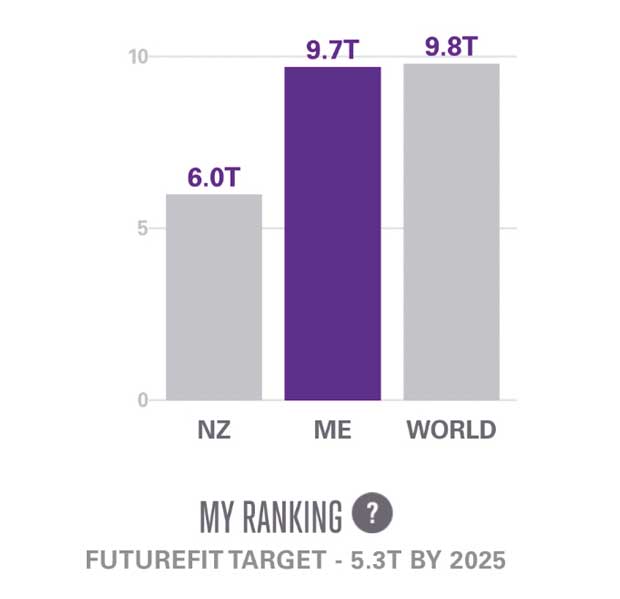 My carbon footprint was higher than the New Zealand average.

My yearly carbon emissions, if similarly measured, would top one of Auckland’s tallest landmarks, the 29-storey Price Waterhouse Cooper building. The thought of me causing a skyscraper’s worth of greenhouse gas to be trapped in the atmosphere heating the Earth gave me heart palpitations. 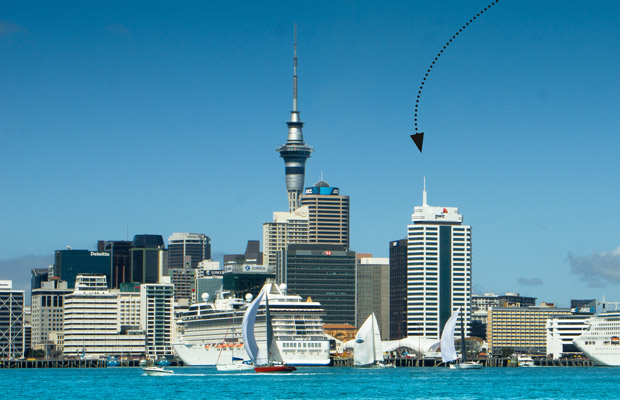 Did my emissions contribute to the droughts this year? Were the rising sea temperatures affecting New Zealand’s marine life partly my doing? Was I indirectly a penguin killer? The short answer is, yes. Time to change. 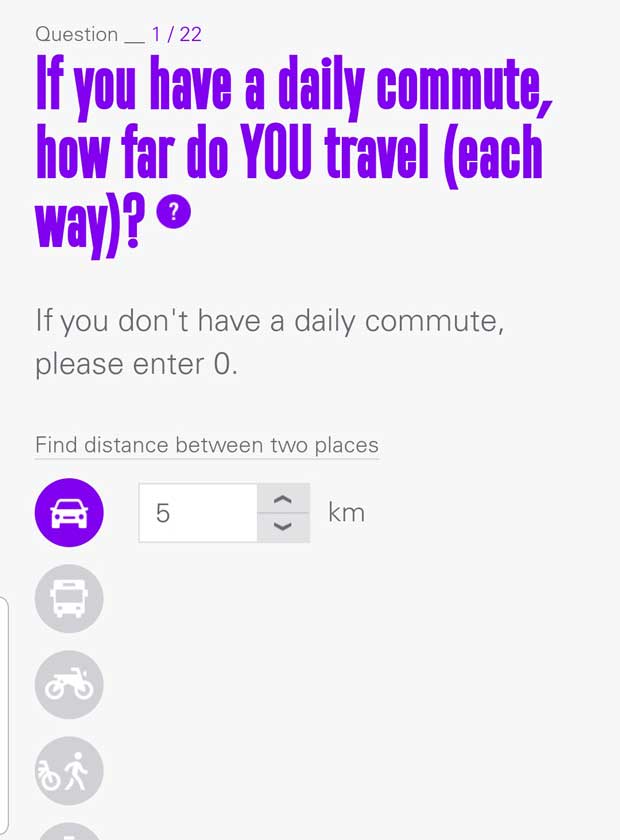 To calculate my carbon footprint I answered a survey on the FutureFit website.

My goal? Reduce my carbon emissions within four weeks using the FutureFit.nz carbon footprint tool. The website’s digital dashboard set weekly “action” goals towards a lighter footprint. The first was to step out of the car and onto my electric scooter. I’m not a confident cyclist, so riding an e-scooter on the sidewalk seemed like a good plan.

In Royal Oak on my morning commute a cracked footpath saw me air-jump like skateboard legend Tony Hawk. On my descent, I had visions of my brains splattered on the pavement alongside the yoghurt and muesli in my backpack. Who would clean up that I wondered? Ready to e-scooter to work.

Luckily, I landed safely, with no breakfast harmed. I was getting the hang of this e-scooter thing when a gaggle of private-school girls giggled at me. Yes, my activewear  was frumpy. The 40-minute e-scoot commute took only slightly longer than it usually takes for a car commute in rush-hour (it’s called traffic, folks). Good news? Avoiding the car for a day saved 2.05kg of carbon emissions.

Food was next on my action list. Just one meat-free day would save 3.02kg of carbon and my partner Andrew, an avid carnivore, was going to have to join the veggie brigade. When I didn’t ask for help carrying the groceries inside, he was suspicious.

“What are you cooking?” he asked, eyeing the lentil cans on the bench with trepidation. 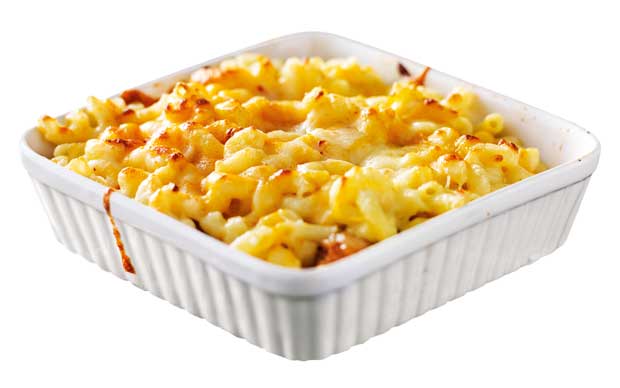 Macaroni cheese won over the hearts and minds of the skeptics.

For the vegetarian regime to be a hit, I knew I had to win over my meat man with a doozy in the first round. Macaroni cheese was that masterstroke and Andrew declared this veggie thing wasn’t so bad. High praise indeed. The dairy-free day (a saving of 0.92kg of carbon) was a different story. This joyless 24 hours started with a black coffee, which darkened my mood.

The coconut yoghurt on my fruit for breakfast tasted like smelly socks, the soymilk in my second coffee curdled and, without butter, the marmite on toast for lunch was an abomination. By the evening, I was an angry woman, and the gym trainer commented that I was boxing with more force than usual. I declared that I’d rather have more vegetarian days in Week 2 than one moment longer without milk in my coffee.

Other carbon savings of Week 1? Washing clothes in cold water (-0.12kg), the hipster reusable coffee cup (-0.06kg), public transport instead of the e-scooter (-1.15kg), a weekly meal plan (-1.27kg), eating New Zealand-grown produce in season (-6.42kg). (Although I was slightly miffed there weren’t bonus points for cooking with my backyard tomatoes and salad greens.)

More of the same. These changes were not particularly difficult and required only additional organization and logistical planning. For example, don’t take the train and the office compost bin home on the same day — make that a car-day task. I got two thumbs-up from Andrew for the lentil-based vegetarian bolognese (thanks, Jamie Oliver).

My eco-changes were deliberately small and therefore manageable: two days without a car and two vegetarian days. I didn’t want to risk going too extreme. To fall off the bandwagon would be the environmental equivalent of a dieter piling on kilos at the end of a fast.

Still, I looked forward to my weekly email from FutureFit, prompting me to update the dashboard to see my carbon-emission load plummet. 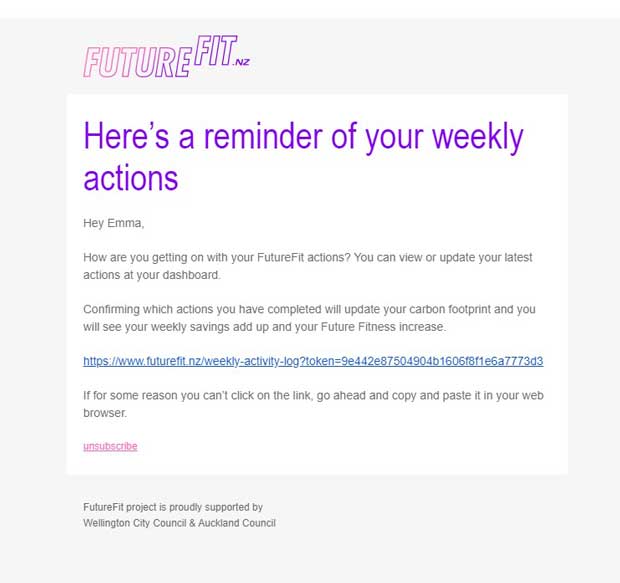 A friendly reminder to update my dashboard.

Time for a big payoff. Domestic flights and one international flight had contributed enormously to my emissions tally. Holidaying abroad was replaced by a local trip. Luckily, my FutureFit challenge coincided with a public holiday. My long weekend in Whangamatā (instead of a weekend in Melbourne or the tropics) saved a whopping 470kg of carbon. 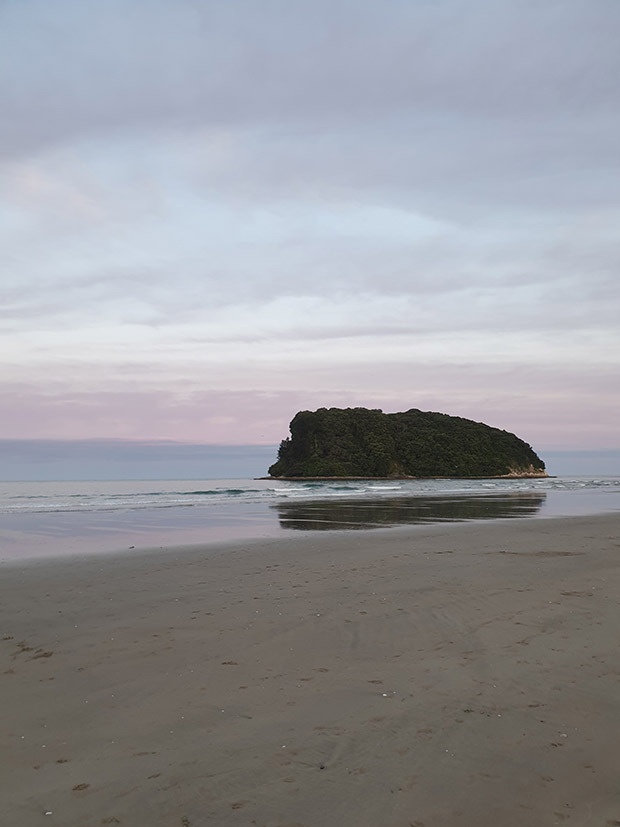 A short-haul holiday in Whangamatā.

I also took part in some retail therapy. Instead of buying new clothes, I visited Trade Me and began bidding on second-hand clothes with feverish enthusiasm. I won the auction for a second-hand jacket by a Kiwi designer, paying only $30, saving a tonne on the retail price and also 1.53kg of carbon in my weekly total.

Working from home one day not only meant I got to wear my daggy track pants all day and pat my dog (we’re still working on this particular meat eater’s carbon pawprint) but also saved 2.05kg of carbon.

The final week: Public transport, the e-scooter and veggie meals – Andrew’s monstrously large macaroni cheese which lasted three days (what have I started?) – and more second-hand clothing (a linen cardi from Trade Me, another 1.53kg less carbon and only $20).

My scooter fell short when returning home after buying a dwarf kōwhai for my garden. The tūīs will love this native (it will grow no taller than two metres), but it had to be transported home from the garden centre by car (-0.12kg carbon saved per native tree planted). In four weeks and with small changes, my new behaviour (if continued for one year) would save a mind-blowing 3.4 tonnes of carbon. That’s one-and-a-half elephants! My total footprint reduced from 9.6 tonnes to 6.34 tonnes (no longer the PWC tower, now down to an apartment block).

I have a long way to go, and I might not make it to the ground floor, but I’m sticking to the calculator. Small changes can make a skyscraper-sized difference towards a lighter footprint. 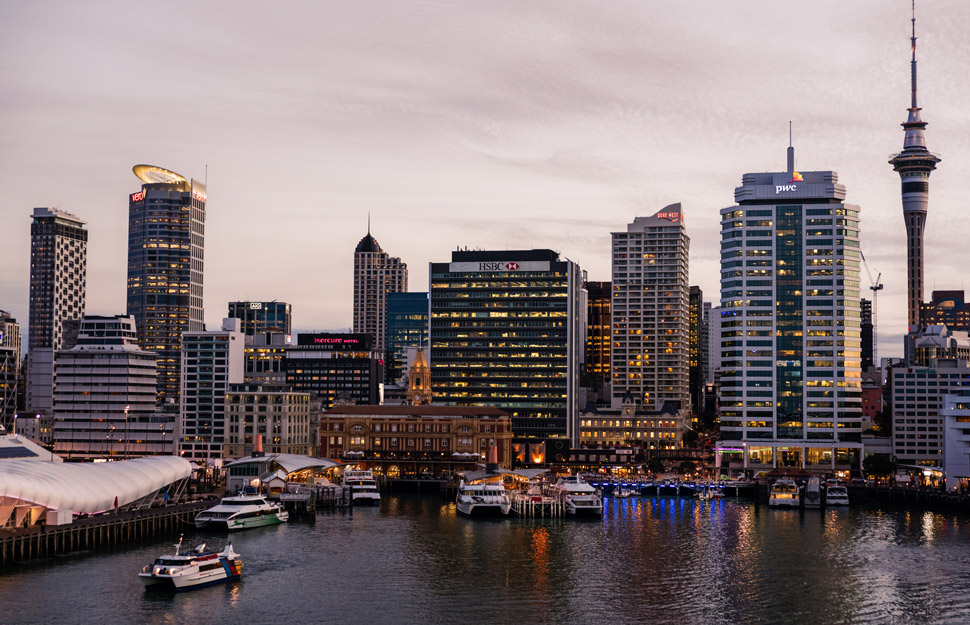 I will offset last year’s flight to Vanuatu at Toitū Envirocare (formerly Enviro-Mark Solutions). This will only cost $7.74c and will help fund a wind farm in Turkey. Offsetting flights removes a whole tonne (-1000kg) from my carbon footprint. A future trip to the United States will be offset. 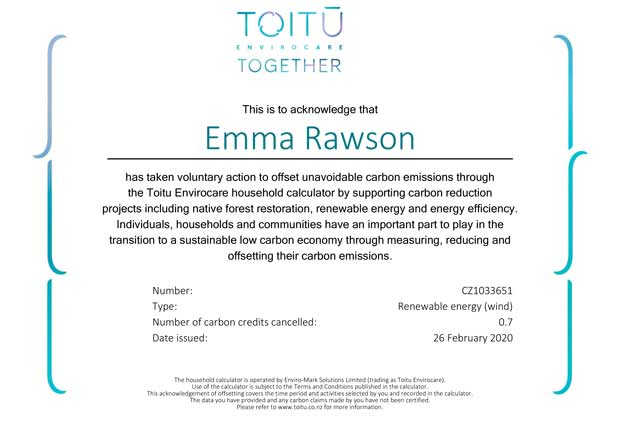 My small townhouse was built in the 1970s, and the insulation should be upgraded, which will save 109kg of carbon. Other home improvements on the agenda are a solar hot-water attachment on the outdoor hot-water cylinder (-63.08kg) and draft excluders (-3.63kg)*. On the future wish-list is an electric car (-770kg).

*The FutureFit Home Energy Audit Toolkit (HEATkit for short) is available to hire from Auckland libraries. Join me on the FutureFit challenge at futurefit.nz

HOW IS THE FUTUREFIT CARBON FOOTPRINT MEASURED?

FutureFit calculates the tonnes of carbon represented in an individual’s personal carbon footprint by using a mix of New Zealand-based emissions and household spending data, along with personal information entered in a questionnaire. Data includes household size and income.

A consumption-based approach is used to calculate emissions embodied in products and services an individual consumes. To find out more about carbon calculations, check out futurefit.nz/about

This is an extract from our new special edition, Sustainability Through the Seasons, on sale 30 March. This special edition practical guide to living a greener and more environmentally friendly life 365 days of the year. It is packed with self-sufficiency tips on seasonal gardening, low-waste living, garden-to-table cooking, sewing and mending, bread-making and crochet and knitting.