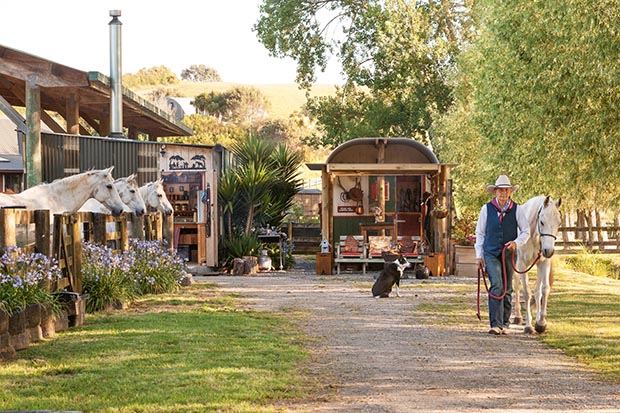 Floyd, Ice and Shoman in the holding pens, border collie Pippin and Jools with Intrige. The caboose sits beside the kitchen/lounge which is attached to the undercover arena.

When everybody knows your name, a private space becomes a treasure and Jools Topp has found hers in a country caboose.

Space, scientifically defined as the unlimited or incalculably great three-dimensional realm or expanse in which all material objects and all events are located, is a funny thing. Sometimes a person can outgrow it, even when it is bigger than they are.

Sometimes it shrinks and closes in, although its edges remain out of reach. It can be wonderfully fluid and depressingly rigid. Sometimes it’s a secret nook; sometimes just a favourite chair; and sometimes all the space we need is simply in our heads. 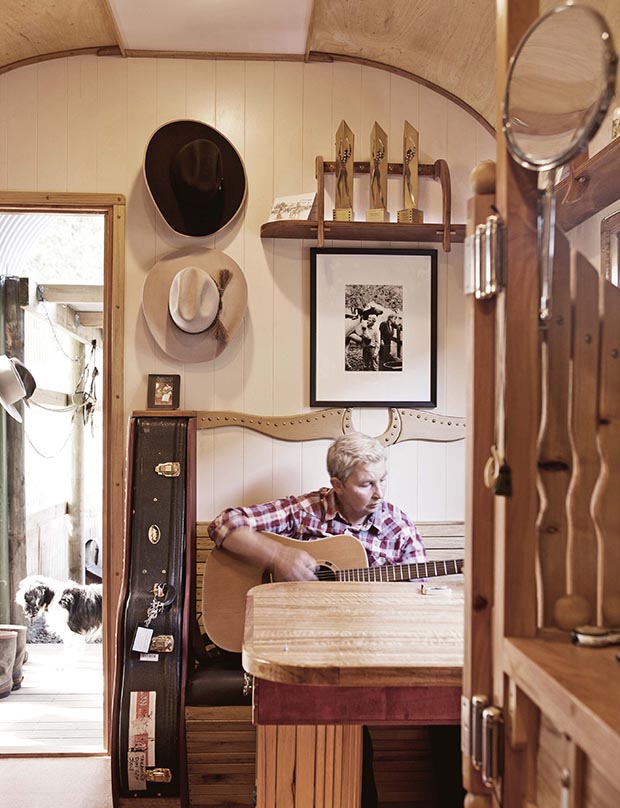 Three New Zealand film and television awards for the Topps’ TV series take pride of place in the diner alcove.

Jools Topp lives in two spaces: one is huge and public and spreads the length and breadth of New Zealand and the other is more private and takes up hardly any of Aotearoa at all. She didn’t really know just what she was searching for when she was first seeking a new home and now it seems impossible that she could live anywhere else but under the trees and down by the stream within cooee of her horses in a little custom-made caboose.

It was her friend Michaela’s dad Dave Evans of Little Horse Design who built it. He thought of everything a girl might need and then he swung into action. It is plain that he knows his stuff and that he has a great affection for this particular client, although Jools didn’t know she was his client until the day he told her he had just the answer to her housing crisis. Dave built the caboose easily enough and then it was time to make it unmistakeably Jools’. The caboose features traditional rawhide, horsehair and fabric wall decorations, ceiling lights recycled from an old caravan and saloon doors that open into the bathroom and bedroom.

Every girl needs a rainbow, he thought, so he took a piece of wood and sliced it into several arcs. Then he stained them with the colours of the spectrum and put them back together on the side of a cupboard so it is the first thing Jools sees when she steps into her home. He built a bed into the far end and a clever cupboard with folding doors and cunning storage bins hidden in plain sight.

He remembered Jools’ fondness for the sea so he sliced another piece of wood, this time in wavy, seaweedy slats, stained them the hues of the ocean and fitted them back together, so the first thing Jools sees when she wakes – apart, perhaps, from a close-up of the face of her handsome cat Carlos – is a soothing abstract of the sea. 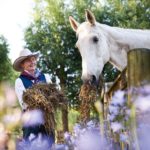 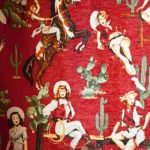 Vintage fabric for the curtains was a find at the Tamworth, NSW, country music festival. 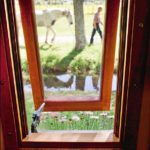 A toy pistol acts as a window catch. 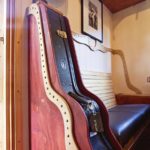 The built-in cubby-hole for Jools’ guitar forms one end of the diner seat. 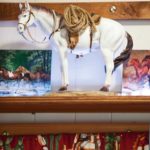 The horse was a gift brought back from the United States by fiddler Marian Burns.

Every girl needs space to display her treasures, thought Dave, so along the top of the walls he put struts shaped like horses’ tails to brace the pelmets that double as shelves for Jools’ collection of horse memorabilia. On the inside bottom of the drawers he scrawled little phrases with a Western theme for Jools to discover, like the empowering “raging bull”.

Every girl needs a bit of luck, he knew, so he put a lucky horseshoe on one wall, used bits and other pieces of tack for handles and by the little table made from a beautiful piece of heart eucalyptus he made a niche that fits Jools’ guitar case as smoothly as a hot knife sliding through butter. 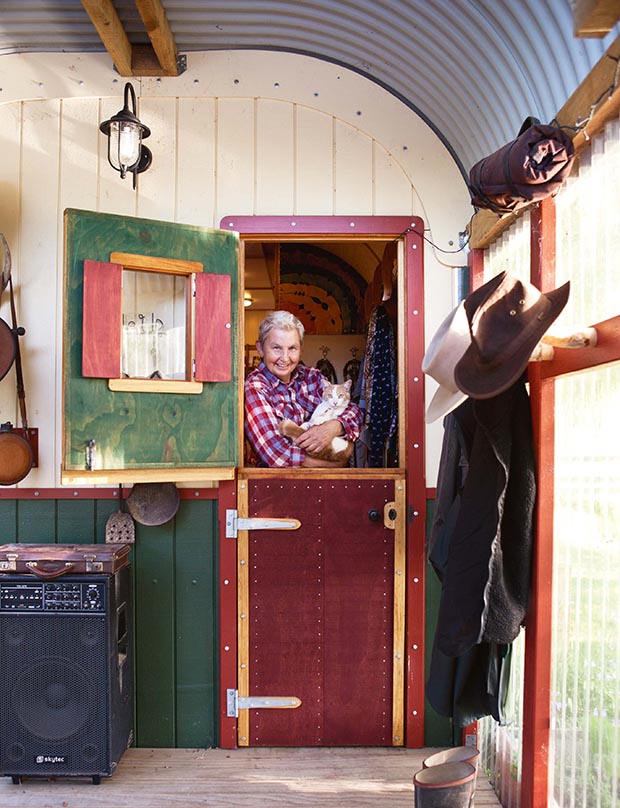 Jools and Carlos at the three-way front door.

The front door is an amusement – a three-in-one contraption that opens as one, half opens as a classic stable door and also has a little door within itself: a little glass hatch that Jools can peer through when visitors call and open if she needs to, in the manner of entry to a speakeasy club.

Separating the space is a pint-sized pair of swinging saloon doors because, after all, when Jools Topp is not one half of a singing twosome she is a cowgirl – a vaquero to be exact.

This is the current dichotomy of Jools’ life. While her little caboose is spatially challenged – by choice – the life of a vaquero is out in the open and under the sky – by choice.

The original vaqueros lived in very wide spaces and under extremely high skies, first on dusty Spanish plains and then across the wide sierras of California; their descendants still do. Vaqueros are nothing without their horses. A horse will die for its vaquero and a vaquero will die for his horse. Which is not as melodramatic as it sounds because the life of a vaquero, even now, can be tough and dangerous. It’s not quite so dangerous being a vaquero in Auckland’s Wild West but it was the discovery that more people front up to the hospital emergency department at weekends as a result of horse-riding mishaps than from rugby and soccer combined that led Jools and her friends Mary, Teresa and Michaela to introduce the vaquero to New Zealand – or at least the teachings of the vaquero.

There’s an added bonus for Jools: she gets to dress up. Vaqueros wear wide chaps called armitas, a flat Spanish-style brimmed hat, a fancy waistcoat and a bright scarf when they’re not sweating it out chasing cattle. There are several decorative knots that can be used to tie the scarf and that appeals to the theatrical side of Jools as well. A perspex shutter allows visitors to view the arena, cutlery drawers were made by Jools from macrocarpa left over from a house lot and the framed photo of Jools is from the Breast Cancer body-painted calendar.

Jools gets to wear her vaquero rig a lot because she is the host of the Liberty Circle Ranch, the spread she shares with Mary in the big house just beyond the caboose and Teresa and Michaela in the converted barn across the paddock.

It is the best of community living, Jools reckons, each with their own space but with plenty of shared spaces as well, such as each other’s kitchens and, particularly, the kitchen Jools built just steps from the caboose that opens onto the covered arena in which the horses learn how to become comfortable in their own skins. 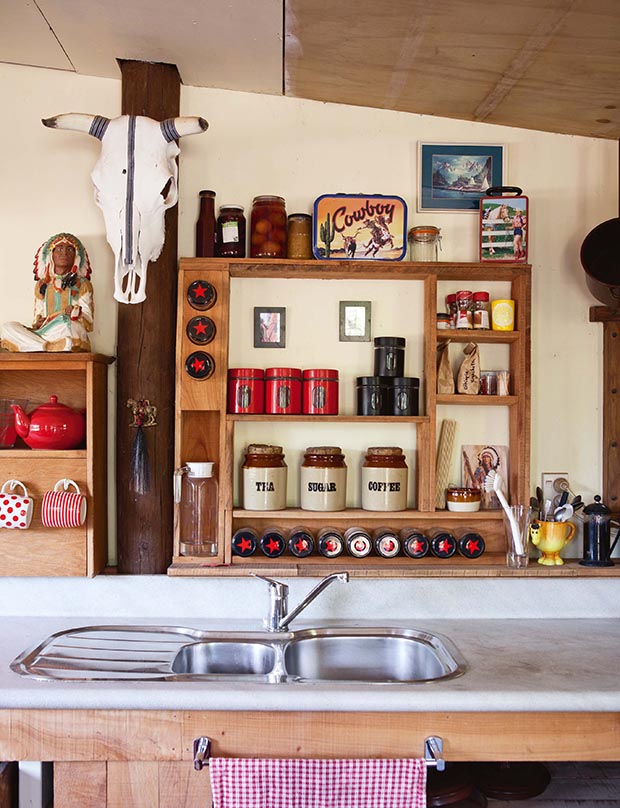 In the kitchen overlooking the arena a decorated skull hangs next to a carved Indian Jools found in a garage sale in New York.

The hardest thing about downsizing was getting rid of the clutter. All those things believed to be precious, mostly in a sentimental way, had to be re-evaluated. It has been said that sentimentality is a form of fatigue and this may well be true. All the stuff was, well, just stuff, says Jools. She reckons there’s a lot to be said for fixing things up rather than buying new ones.

Sure, a lot of it was a tangible reminder of good times – maybe some bad times that should nevertheless be marked with a keepsake – but all that can be stored in your memory, she says, instead of being excessive clutter. And she spits out “clutter” with such exasperated emphasis that she startles Angelina the robotic vacuum cleaner into an astonished hum and frantic search for dust. Pippin the dog gives Angelina a disparaging look while Jools hustles her back onto her charging dock. 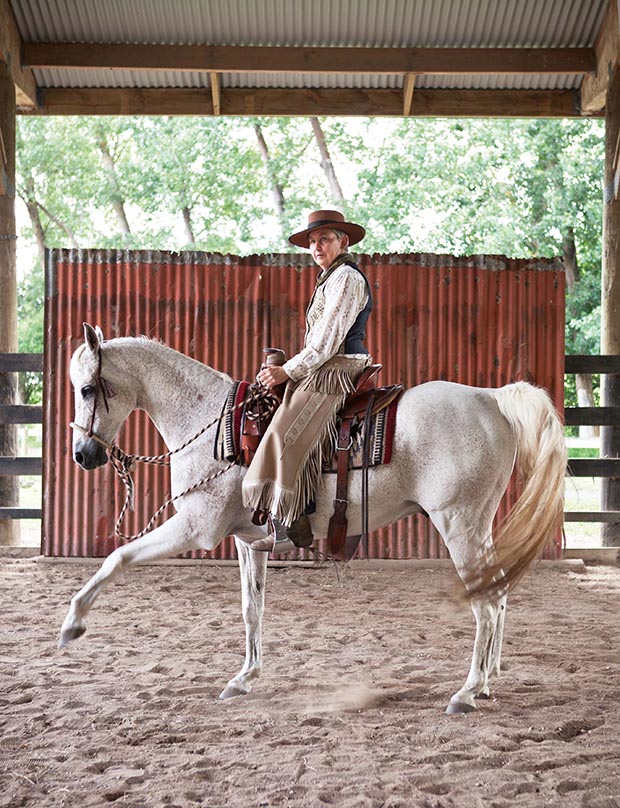 In the arena Intrige demonstrates the Spanish walk with Jools in her vaquero gear.

Decluttering was liberating but new stuff is already starting to creep in. Jools bought her kitchen a huge Welsh dresser and in it are stored finds from second-hand shops: an engraved goblet with Cocktails etched on one side and Gloom-busters on the other and a very pretty canteen of cutlery nestled in satin in a box with two gold clasps. A girl has to have a decent set of knives and forks – and a tablecloth – for when Mum comes to visit.

Out in the yard the sturdy Rosie, once a runty rescue calf, bellows with satisfaction. In the paddocks Showman, Floyd, Intrige, Stanley and Texas potter around and Peggy the cat rolls on the little bridge across the stream, making her beautifully marked coat all dusty. In the caboose Carlos sprawls across the duvet and outside in the garden the chooks are scratching up a feast. 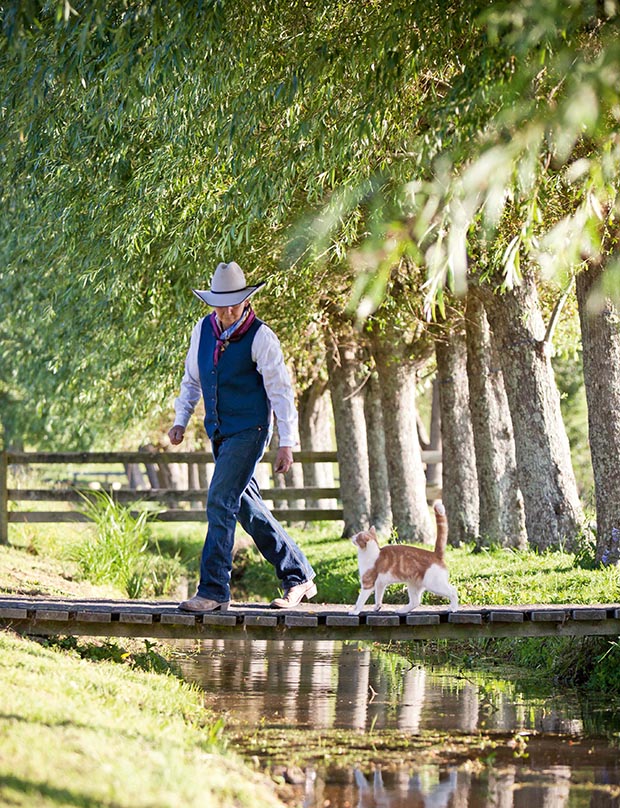 Jools built the bridge over the stream.

Under the pergola Jools sits looking out over the paddocks. Over her shoulder the rainbow Dave crafted is caught by the sun peering in the door as it climbs towards noon. It used to be a market garden, this low, quiet plain in the crook of the Kaipara Harbour’s elbow. It’s black peat throughout – so rich, says Jools, you could grow just about anything in it.

It’s not only the peat that’s rich. Jools Topp may not yet be at the end of her particular rainbow, but she’s already found the gold. 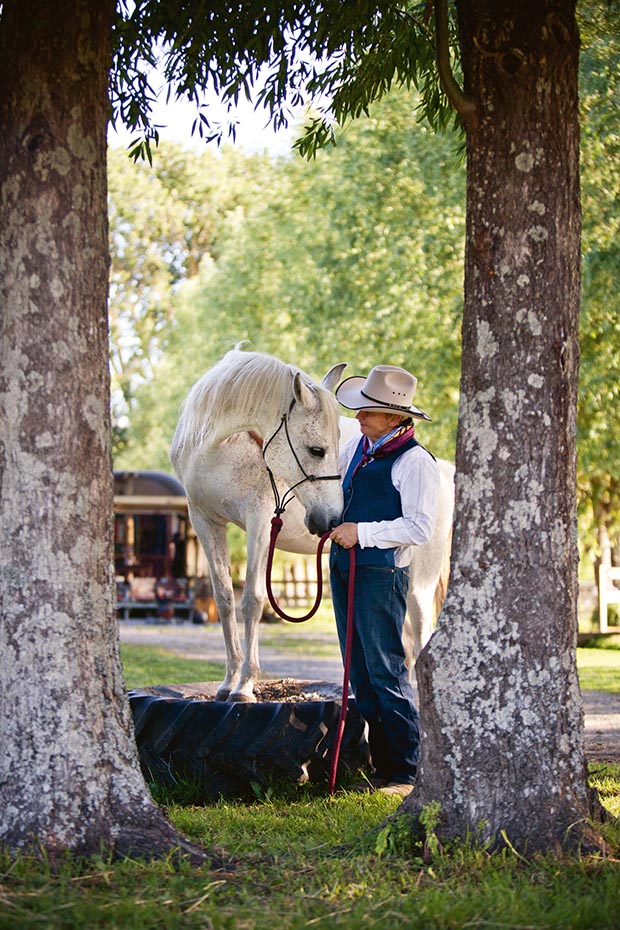 Stretching on an old filled-in tractor tyre provides relief after a ride for Intrige.

JOOLS’ DREAM
“This is my dream but if I wasn’t a Topp twin I probably wouldn’t have achieved it. Singing has funded this and Lynda and I will sing until the day we die. This is not just a home – it is something special. Hundreds of people have come here over the weekends and it’s like Grand Central Station. But I love it. I love making cups of tea and talking, saddling up the horses and meeting all sorts of people but I also love it when they’re all gone and it’s just us and the animals and the quiet.” 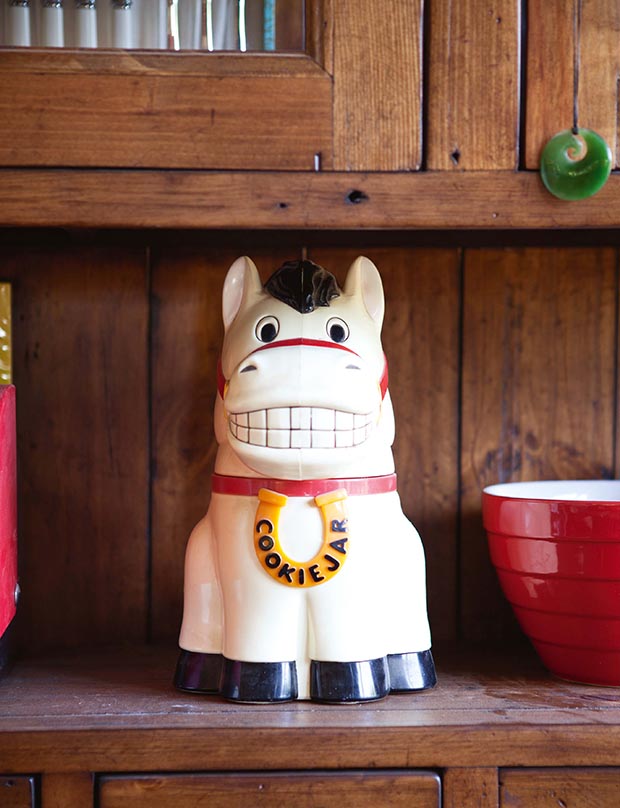