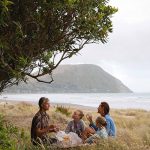 This favourite spot brings a whole new meaning to the term “family tree”. Should the girls ever get interested in genealogy they will remember that part of theirs was tangible. 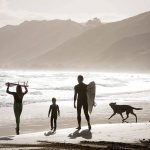 It was surfing that started it all in a way. If Pete hadn’t met some Australian surfers on the Cornish breaks he and Ellen might never have headed down this way and what a hole that would have left in some Gizzy kids’ lives. 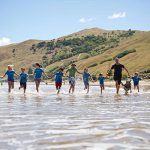 Sometimes Kahu makes an exception to her self-imposed zaniness; she knows when it is best to run with the crowd, rather than away from it. And why wouldn’t she? These kids love her to bits and she has no shortage of walkers and playmates when school is supposedly in. 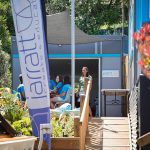 The converted boatshed and its wee deck make the perfect classroom. 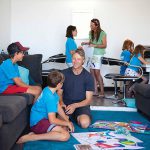 Inside, the walls and furnishings have been purposely kept plain and unadorned so as not to distract the children from forming their own ideas. 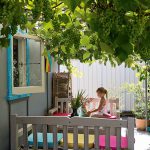 Another of the great things about No16 is the numerous nooks and crannies where a body can just sit by their little self and commune with their bear. 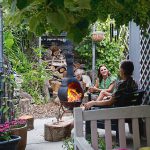 Or where two dreamers can grin at each other over a glass of wine and a chiminea.

Friends told Peter and Ellen Jarratt they were reckless, crazy and throwing it all away when they upped sticks to follow their hearts. But they did it anyway. 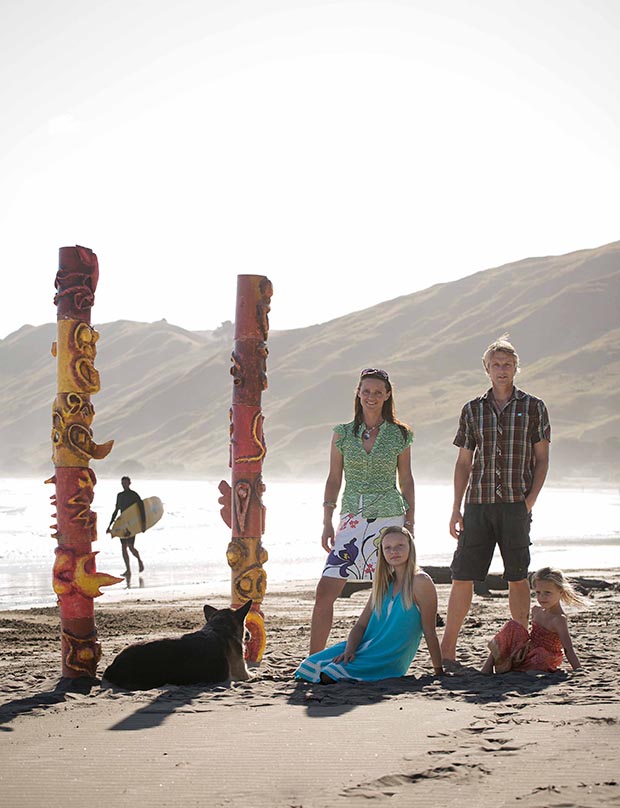 Darling Kahu does her thing – looks one way while everyone else looks the other. Ellen, Pete, Bo, Lulu and totem poles the Create & Educate kids created after researching Maori, First Nation and Inuit cultures. What did that project teach them? That although outwardly we may look and act a little differently, we’re all brothers and sisters under the skin.

They should have known when the unicorn stepped onto the road in front of them that this was no ordinary adventure. They should have known. And perhaps, deep down, they did but at the time New Zealand just kept unfolding one surprise after the other and they were living each moment, too enthralled by what was around the next bend to have time to wonder what would happen the next day.

Of course, on closer inspection it wasn’t a unicorn, just a rather ethereal white horse, which was both disappointing and amusing for Peter and Ellen Jarratt previously of Cornwall and currently of no fixed abode unless a handful of tent pegs and a swathe of double-stitched nylon counted as such. 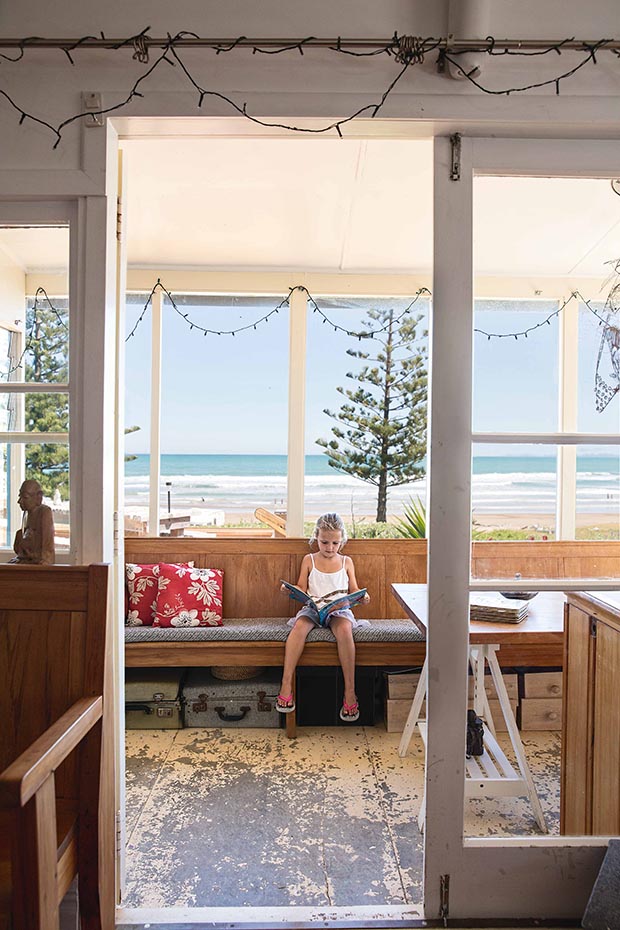 It’s hard to believe you could turn a back to that view no matter how interesting the book. But – ho, hum – just another normal day in paradise for Lulu. In a few years, however, when the real world comes a little closer, she will realize what a truly wonderful, carefree childhood she has had.

But the encounter with the horse was just one more exciting and startling happenstance in a series of events that would culminate in a wee house, two daughters, Kahu the dog and a creative-learning programme that, although run from a converted boatshed just metres from the long sandy stretch of Gisborne’s Makorori Beach, has an international reach.

Now, sitting on the deck of their home watching their girls Bo (12) and Lulu (five) tumbling through the grass and onto the sand they cannot stop grinning. They cannot stop pinching themselves that they have achieved their dream with such splendid success. 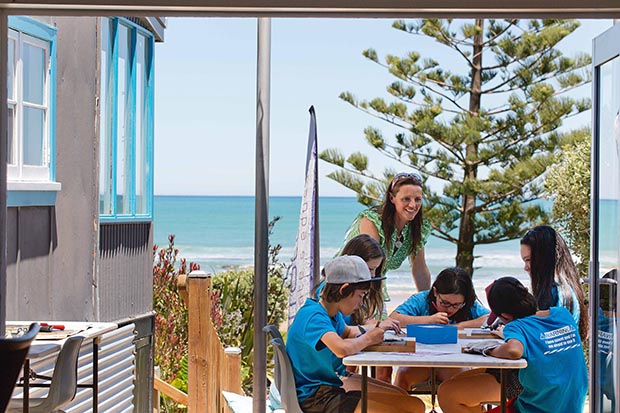 It started innocuously enough. Pete had finished his degree in business and economics at Plymouth University and was about to embark on some post-grad studies; Ellen had been accepted into university in Loughborough for an arts degree. Both were about to knuckle down and if they were to go adventuring they would need to do it now, so they deferred study for a year and set off to see the world. Actually, they didn’t see the world, at least at ground level, because they flew right over it to touch down in Auckland.

They came to New Zealand because everyone else was going to Australia and although this country has more sheep than most people dream possible, the Jarratts have never been part of the flock. They landed with just one contact, that of top surfer Wayne Parkes, which is how they found themselves at Piha, one of the country’s most popular surf beaches. The deck is the main living area for the Jarratts, especially in good weather. It overlooks Makorori Beach, which starts just metres away across a narrow, uncurbed twist of asphalted roading. In fact, the long sweep of sand is itself an extension of the Jarratts’ living area.

And there they stayed surfing and hanging out until they were the only guests left in the camping ground. Two things became apparent; the till of the local dairy was really the only thing benefitting from their long stay and every time they saw the weather map on the television there was always a sun symbol hovering where the North Island’s knobbly eastern elbow jutted into the sea. 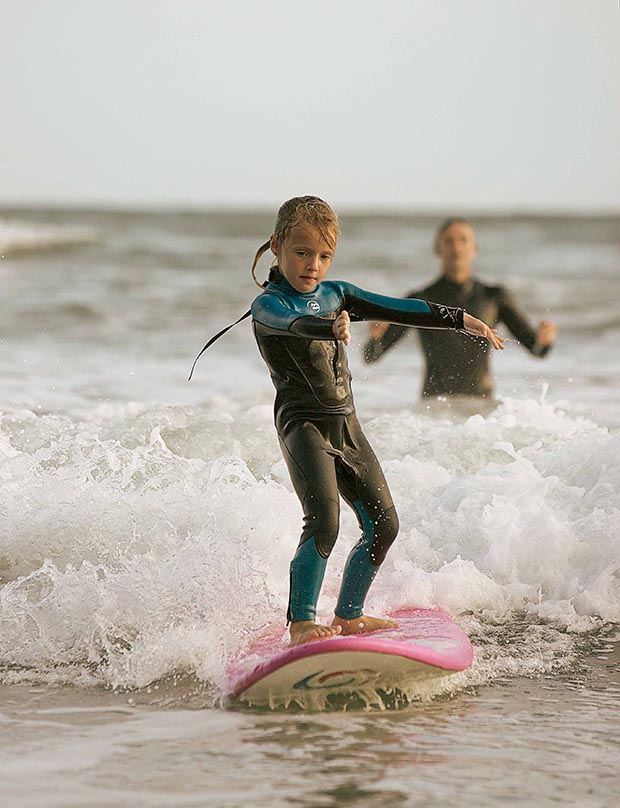 They wrung out their wallets and bought a hand-painted Honda Civic that only held together because so many pieces were in danger of falling off it didn’t know where to start shedding. But it had a sturdy heart, which was lucky because Ellen and Pete simply pointed its nose towards that tantalizing sun symbol and took the first road east. It was the long way around, following the curvy, often unsealed and sometimes desolate, route along the coast and around East Cape.

More stories you might like:
Two plastic-free projects: How to make an origami paper bin liner and a paper kete (basket) They went through valleys so deep and mysterious they expected dinosaurs and saw vistas so beautiful they almost wore themselves out exclaiming. Every day bought them such magic it was no wonder they mistook the horse for a unicorn. Then one day they crested a hill and found themselves looking straight down Makorori Beach.

They drifted to a stop under a large tree and that is where they stayed for the next eight months – under the tree in their little tent, which they erected each evening once it got dark and dismantled very early each morning because they didn’t want to be a nuisance to the locals. 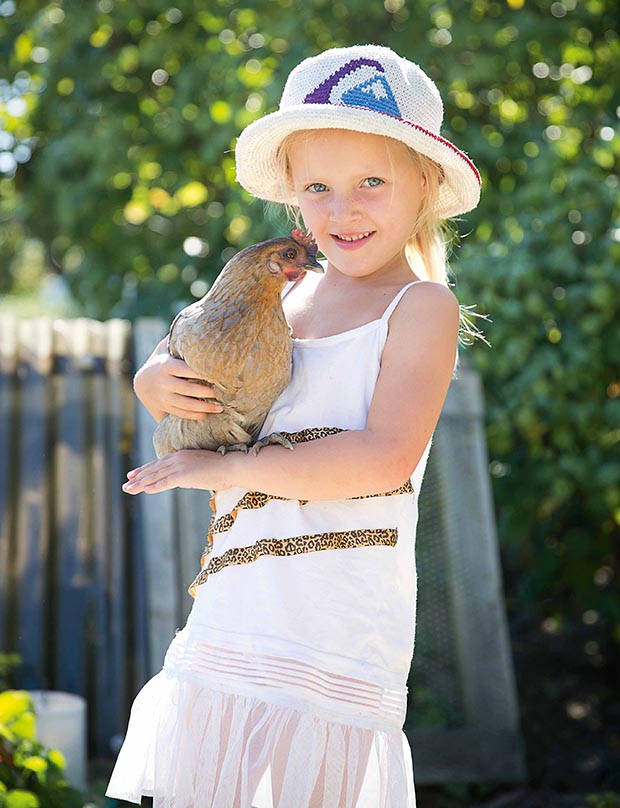 They needn’t have worried – the residents rallied around them as if they were some local project, bringing crayfish, beer and other supplies and checking on their health and well-being. The local policeman gave them the key to his house so they could shower and just down the road at No16, the tenant offered them his sunroom as a bedroom when the weather was inclement. It couldn’t last, of course; they couldn’t keep the real world at bay forever. They decided they wanted to stay in New Zealand but they would need to wind up their previous lives first. A friend told them that if they came back they would need to bring something constructive with them so they returned home to university, Pete to do post-grad studies, Ellen to do her arts degree and then both trained as teachers. 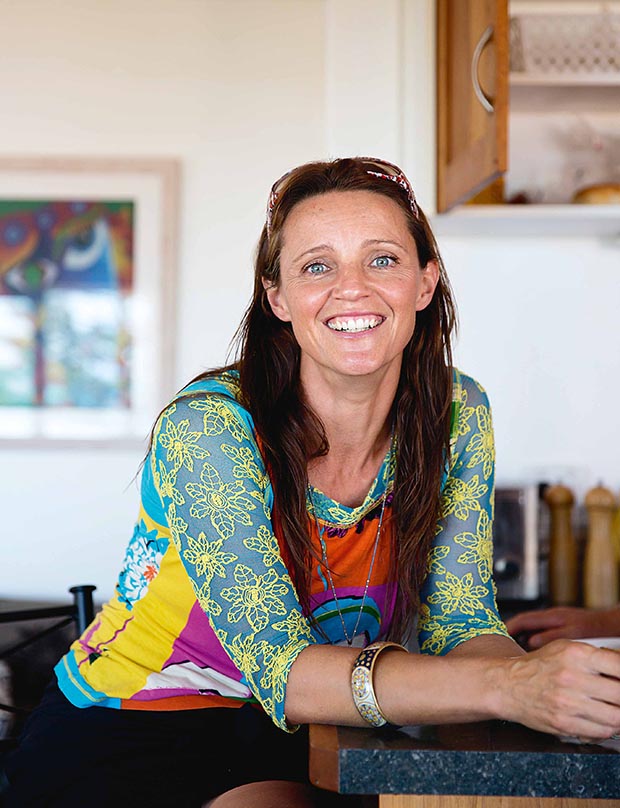 The dream went on hold. Sometimes they took it out and hungered after it but mostly they got swept up in the current reality of their lives. They worked at the same school in Cornwall, with Pete on track to be the next principal. Then one day he was asked to evaluate the national curriculum and how it was serving Britain’s children. It was a project that was to change their lives. The upshot was that Pete became interested in the relationship between graduating students and the businesses that would hire them and set up a programme that would link the two to mutual advantage. The project was a wild success. Even better, it won a national innovation award allowing Pete and Ellen to skip school and set up their own education consultancy.

A string of high-profile education projects ensued, taking them all over the world working with multinational companies and celebrities such as chef Rick Stein. Pete began to get requests to speak internationally and one day there it was – an invitation to speak in Auckland and Wellington. Instead of a hire car, they requested a motorhome and at last they returned to Gisborne. It had been a decade since they left there but as soon as they arrived – on the more direct route through the gorge this time – they knew they could never leave again. There were some hoops to climb through, bureaucracy and some frustratingly knotted red tape to untangle but finally they were back on their beloved Makorori Beach, once more walking through the sand, once more sitting under what they now considered their tree. On the seashore in front of the house they had long ago been welcomed into during inclement weather, they met a man towelling off from a swim. They chatted and he invited them to dinner at his place further down the road. During the evening he asked if they were interested in buying at Makorori as he had a rental property a few doors down that he had decided to cash up. Those who are prepared for the possibility of unicorns also roll easily with destiny so in some ways it was no surprise at all to Pete and Ellen that the house in question should be No16. 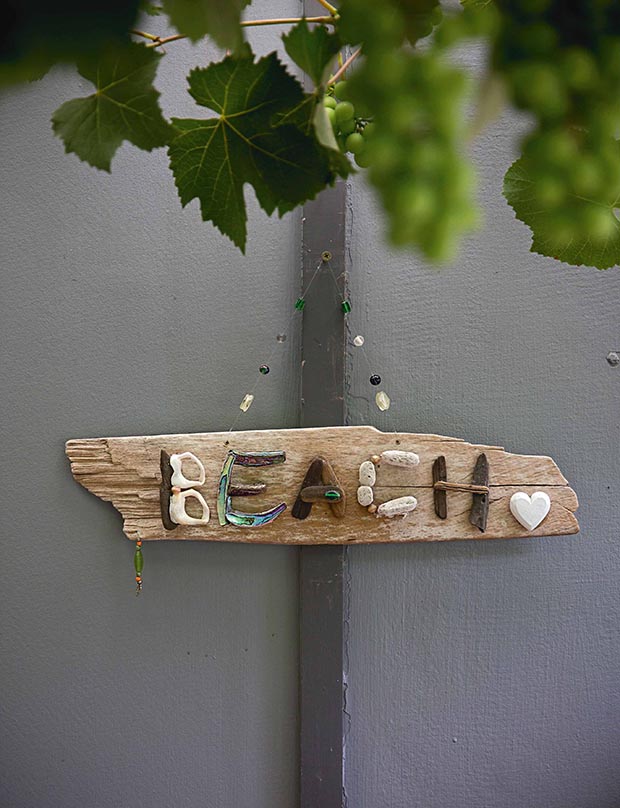 And so there they are – installed centre stage in their dream. Their educational programme, Create & Educate, now has a Kiwi twang. It has been recalibrated and refined and operates out of a refurbished boatshed in the garden and some fortunate Gizzy kids are finding that their funny little quirks are, in fact, a gift. At their feet Kahu stretches and yawns. She started a career as a search and rescue dog, a serious and solemn profession for grave and earnest hounds. In training, when her fellow recruits were told to go right, Kahu would go left. When they were exhorted to go left, Kahu would go right. If there were any way but the sanctioned way, there would go Kahu – straight out the door in the end as she was eventually drummed out of the corps. She couldn’t be a better fit for the Jarratt household.

Pete’s investigation into the British national curriculum revealed that the kids who don’t fit into the box are often the ones that businesses want. These are the kids that grow to be the ideas people, the entrepreneurs, the thinkers. Creative, hands-on learning is not happening now in many schools but academics and creativity should go hand in hand, believe the Jarratts. Children shouldn’t feel they have to be brilliant at everything; what they need is to enjoy the things they are really good at and swap their talents when they need help. Some kids are good at outlines, others are good at details; between them they can offer a whole package. Only about 20 per cent of the Gizzy kids fronting up for an hour’s creative activity at the Jarratts are arty. The rest are not but nevertheless the art they achieve is impressive. “Warning! I have talent and I’m not afraid to use it,” say the children’s T-shirts. createandeducate.org.nz