It’s the end of an era as the eldest is finished as a school student with varsity looming next year.

Her last exam has been sat and the school uniform will head to the second hand shop as it won’t fit her younger but taller sister.

Her parents are slowly getting to grips with what’s happened. Where have those years gone?

I can still vividly remember walking her to school on her first day, how excited she was and how exhausted she was when I met her at the gate at 3pm.

Heck, I can remember bringing her home from hospital and almost crashing the car as I drove up Wellington’s Ngauranga Gorge because I was too busy checking on her in the rear view mirror.

School trips could be perilous. I volunteered to help take her class to Wellington Zoo and, having filled in a small forest’s worth of health and safety paperwork, we set off. 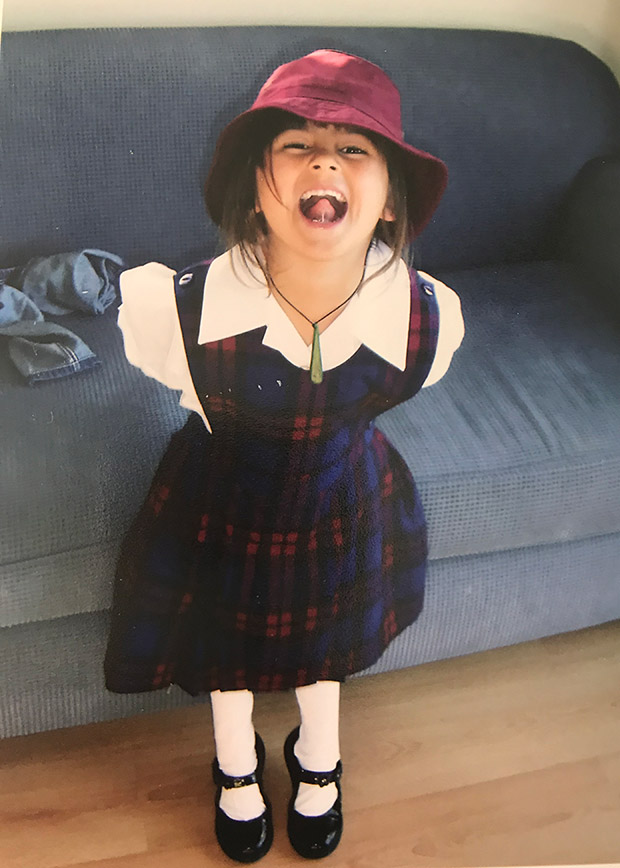 Jim’s eldest daughter at the beginning of her schooling days.

As we walked up a small hill toward the giraffes we passed the baboons. One big bloke was at the fence performing an act upon himself I knew five year old girls from a small Catholic school shouldn’t see.

It was terrifying as I imagined the fallout while trying to rush the girls past the self-satisfying baboon and on to the safer giraffes.

There’s more independence at college and it comes with a dizzying array of subjects, sports, extracurricular opportunities, camps, shows and balls. But no nits!

It’s also true that I’m often bamboozled by what they are studying and feel inept when I’m asked to help with homework.
But we got there, and to say her Mum and I are proud of the young woman our eldest has grown into doesn’t get close to how we feel.

We’re probably more excited than she is about the next chapter in her life, perhaps because we have our own history to reflect on.

Though times have certainly changed.

My ‘first day at school’ photo was taken on a film camera. Now we snap pics on mobiles that are more computer than phone (with the smartphone the greatest invention of my life time).

Our horizons were more limited, more predictable and prescribed. We learnt from textbooks and encyclopedias; my girls have the world and all its history and information literally at their fingertips. Jim’s first school photo was taken on a film camera.

There are so many amazing examples of success in New Zealand for the girls to be encouraged by from singer Lorde to kayaker Lisa Carrington, actors Lucy Lawless and Anna Paquin, scientist Dr Michelle Dickinson and our Prime Minister, Jacinda Ardern – to name just a few.

I was reminded, once again, of how our little country punches above its weight when I emceed a fundraising evening for the Burn Support Group I’m so proud to be associated with.

It was at the Sugar Club, Peter Gordan’s restaurant at the top of Auckland’s Sky Tower and the internationally respected chef was there to say a few words.

Peter’s a burns survivor too and talked about how his “scabs and scars” shaped his life, stiffened his resolve and slowly blended into his personality.

He talked too of his excitement at cooking for the Queen, for Barack Obama, and for Jacinda Ardern and Theresa May.

Not bad for a lad from Whanganui who seemed to epitomize the down-to-earth Kiwi way of succeeding.

It’s a pity my girls weren’t there to hear him because, in his soft voice, he related an inspiring tale of resolve and perseverance.
But then I’ve always felt real role models are found much closer to home and in that respect the girls are well served by a collection of older cousins who are taking the world by storm.

There’s always going to be missteps and mistakes along the way and the youngest, in particular, likes to push the boundaries.
She also loves a decent wind up.

We left them at home for the night recently and I flicked out a text to check that everything was ok.

I replied that she could stay there the night. “Dang, how am I meant to get rid of the drugs before you get home then?”