In the days following the Christchurch mosque attacks, Jim Kayes reflects on the power of hope and the Spirit of New Zealand.

There were about 200 gathered on the grass at the water’s edge, ready for the Chopper Swim Challenge from Waiheke to Auckland’s Mechanic’s Bay.
Olaf, the event organiser, asked us to reflect on the horrific massacre in Christchurch and admitted there was little any of us could do in a direct sense for those affected.
But, he said, we could still do something positive today. “We are raising money for the Westpac Rescue Helicopter, a service that saves lives.”

As I bobbed toward Auckland in my old kayak, keeping an eye on my mate, Matt, one of 30 individual swimmers doing the 20kms solo (another 66 competing in teams), Olaf’s comments echoed in my mind.
It is difficult to know how to feel and what to do, in a practical sense to make a difference, when so removed from an event.

On the evening of the massacre I was helping at a fundraiser for Spirit of Adventure, the Auckland-based trust which takes teenagers on five to 10-day voyages on a three-masted barquentine. My eldest daughter has done both and is volunteering as a leading hand helping others on their voyages. 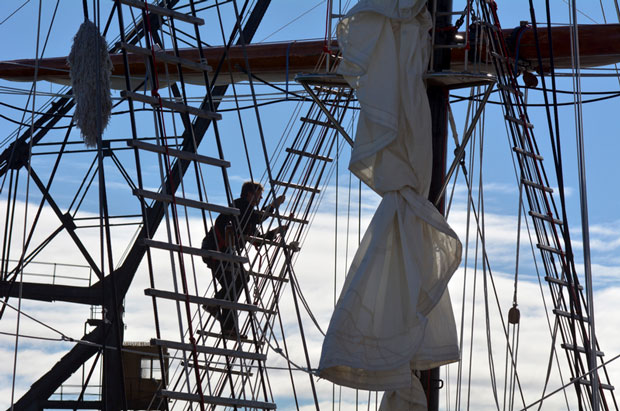 “The Spirit of New Zealand is about bringing together teenagers of all races, religions and sexual preferences,” says Stephen Fisher.

That evening Stephen Fisher, the Spirit’s chairman whose dad Lou setup the trust in the early 1970s, spoke about the horror of what had happened in Christchurch. Like Olaf, he too, looked to the future.

“Spirit of Adventure,” he said, “is about bringing together teenagers of all races, religions and sexual preferences so they can learn about each other – knowledge being the greatest weapon against prejudice and hate.”

Tears slipped down his cheeks as he spoke. We raised $34,000 that night, enough for 10 teens to go on board.

Last year was a difficult one for the youngest at school yet she set about fundraising for a girl in India. She raised $477.40 through a cake stall and sausage sizzle for the girl who had been abandoned by her parents. My daughter knew about this as the Indian-based grandparents of a school mate had taken the girl in.

At first, I was baffled as to why my daughter cared about some kid she will probably never meet in a country she may never visit. But the sheer decency of what she was doing silenced my concerns.

I’ve talked to the girls about what happened in Christchurch. The youngest revealed how easy it was for kids to watch the live stream of the devastating attack that day in class at school.

I was alarmed but she was calm, saying she didn’t watch it after the first few seconds. I want to believe her and think I can. But these events do change our lives.

I was in Rotorua playing in a squash tournament when the 9/11 attacks happened. Our coach, a bit of an insomniac, woke us with words I will never forget.

“You need to come and watch this,” he said, “our world is changing.”

He was right. When we flew home to Wellington a few days later they were building the first of the x-ray screening systems that are now in place at all major airports. I’ve told the girls it’s important to try to not let terrorists change our lives, but they do. I asked the eldest about the Christchurch attacks and how she felt about what happened.

“It’s kinda scary,” she said, “because I walk around the streets never thinking I could die and now I know I can die.”

My daughters’ innocence was lost in Christchurch. It’s trivial, I know, in the context of the death and mayhem that hideous man inflicted in a few short minutes. But it is that loss of innocence, that change in our behaviour, that terrorists want.

About $130,000 was raised for the rescue chopper through the amazing efforts of those 96 who took to the water in their togs and wetsuits. 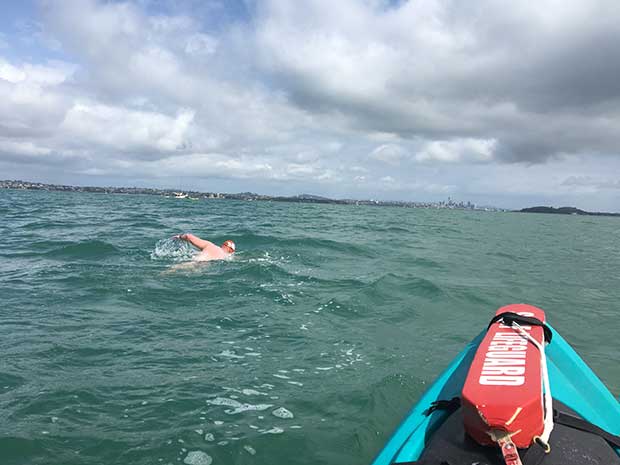 As we neared Bean Rock on Auckland’s Waitemata Harbour, with about about 5kms to go, Matt was struggling. He’d swum 15kms before but what lay ahead was uncharted territory. He came alongside for a drink and to suck on a sachet of energy gel.

He re-started with gusto, the finishing line was within sight. As I bobbed up and down in my kayak I saw the Spirit of New Zealand slip inside the harbour, her sails pulling proudly. It gave me hope.

Hope that our children will look past colour, race, religion or sexual preference and see a person, not a label. Hope that our days will never be darker than they were that awful afternoon in Christchurch.