Jim struggles to stay silent while sitting in the backseat during his daughter’s driving test.

It was hardly my finest moment, far from it.

It’s rare that I lose my cool in public and even rarer that I’d do it in front of one of the girls, but embarrassingly that’s what happened when the eldest failed her driving licence test.

She was failed for not stopping for a woman at a pedestrian crossing. Sounds serious but we were driving at a snail’s crawl because the crossing was on a big speed hump and a ute had crept over it in front of us.

The pedestrian walked onto the crossing when we were about to go up and over the hump.

I know this because it is possible for an observer to sit in the back during a licence test as a “support person”, though you have to stay quiet as they can be failed if you speak.

I should have shut up afterward. Instead, I suggested to the bloke who had done the test that he was wrong, in law, because the woman shouldn’t have walked onto the crossing when she did as we were inside the diamonds painted on the road. She was wrong, not my daughter. He was undeterred.

“You know,” I began, “I’ve always heard these tests are a rort and that you fail drivers just to force them to come back and pay again. I didn’t want to believe that, but you’ve just proved it. You’re a disgrace.”

I was seething when we got back in the car, still furious at the ridiculous test but also angry that I’d behaved so poorly in front of one of the girls.

How do you teach them to treat people with respect when you behave like a dork? 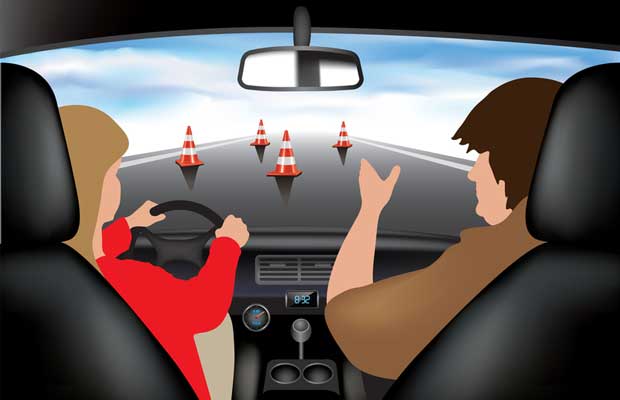 I felt even worse because now I had her blaming herself, not just for failing the test, but for supposedly letting me down.

It has been interesting to learn in the days since how three seems to be the magic number for many when it comes to how often they have to sit to get their licence.

A friend who is a police officer pointed out that as it costs $80 a test. That’s why many who don’t have much cash to spare simply drive unlicenced.

The first time the eldest failed it was for taking too long at a roundabout. Failed for checking and being careful. That’s what we want from our young drivers, isn’t it?

Anyway, back to me being a dork and getting angry at a bloke for doing his job, even if I still reckon it’s a rigged system. It didn’t take long for the news to spread and the youngest was grilling me on my poor behaviour.

“Dad, you always tell us not to lose it with people who are just doing their jobs. What it is you say, ‘the referee never changes his mind’.”

The problem with losing your cool is that you quickly lose the argument, which is a point I’ve tried to teach the girls.

The eldest rebooked her test at a third VTNZ station and this time I decided a pre-test charm offensive wouldn’t hurt. In the 30 seconds it took to walk to the car I tried to make Raj, the tester, my best mate. He must’ve thought he stumbled into a weird Candid Camera episode. As we neared the car he said, politely but pointedly, that I’d have to stop talking when the test started.

Being in the back seat of a driving test is a cruel and unusual punishment. It’s harrowing as you try to guess if that right-hand turn was done in an acceptable manner and frustrating to wait at intersections for the traffic to clear, worried they will pull out in front of a car.

We drove past road works and she slowed down, only for Raj to say she didn’t have to because there was no sign out with a lower limit.

Was that a fail, I wondered, almost aloud. And then she accelerated in an area I thought was a 50km zone. I pushed under her seat with my foot and mouthed “slow down” at the rearview mirror.

She did, and Raj asked why she was driving so slowly in a 70km area.

“You’re impeding the traffic,” he said.

When we returned to base the ever-polite Raj began talking about her various speeds and I thought she’d failed again.

“You’re kidding,” I muttered out loud.

“It’s ok,” Raj said, “you’ve passed,” and then he carried on explaining one other aspect of her driving that needed to be focused.

I was punching the air in delight. Quietly of course.