Blog: is it time for the ducks to get the chop?


This week, Polly defends her ducks from a date with  the casserole pot.

When a very large box arrived at our home, James was quick to take possession.
‘That’ll be the pressure cooker,’ he said.
He’d been anticipating its arrival for some time, enthusiastically extolling the virtues of pressurised cooking as he studied various recipe books.
‘Such a difference in food’s nutrient value! It’ll be brilliant for winter soups and casseroles,’ he promised. 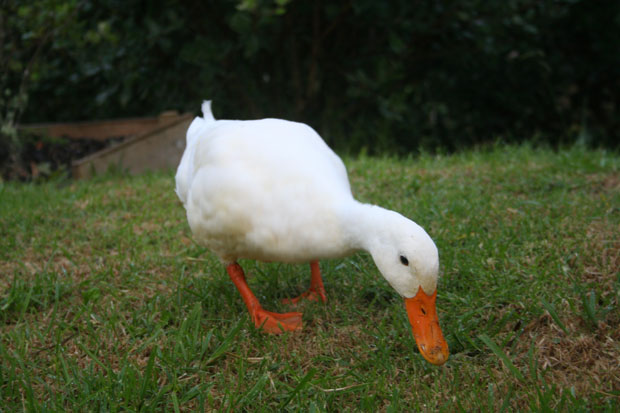 I was taken aback at the size of the new saucepan.
‘How many people are you planning on catering for?’ I asked suspiciously, peering into the stainless steel cavern. It was enormous – big enough to hold a large adult duck.
A duck?
James pretended to whistle nonchalantly while I hurried off to account for my flock.

When I last wrote about my ducks, the family was thoroughly enamoured with the birds; marvelling at their elegance and gentle natures as they sailed round the paddling pool. Then we inherited five more Pekin ducklings.
‘Whatever you do, never feed them near the house,’ I was warned but oh what a joy it was to see the tiny yellow fluff-balls scampering up to the doorstep every time that I yodelled. Who could resist such high-pitched little peepings!? The children loved them even more and left trails of maize across the kitchen as they smuggled out extra handfuls of feed in order to win their affections.
Fattened on crickets and corn, the ducklings grew rapidly, losing their downy cartoon-cuteness to emerge as rowdy, demanding creatures. While the first three ducks are reserved, well-groomed and politely keep their distance, the new arrivals are fearlessly insistent. At 7am every morning they begin their assault, boldly rapping on the glass door with their beaks and loudly quacking for food while pooing all over the doorstep. During the day they roam and poo widely, including indoors if they can. 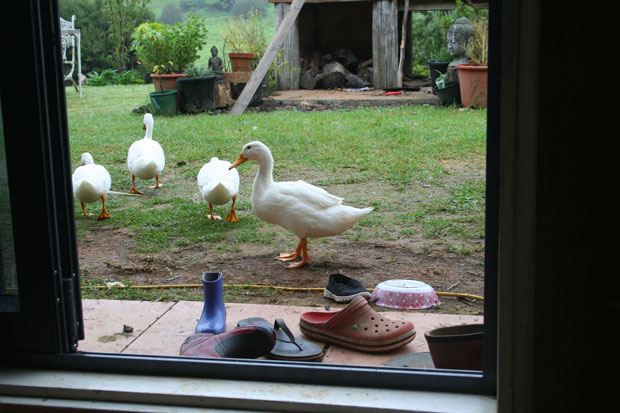 Ducks on the doorstep.

‘You’ve got to do something about your ducks,’ James calls in exasperation as he repeatedly herds indignant birds from the new room.
‘Those ducks are going to get cooked,’ he threatens as he steps into shoes that have been deposited on and in.
‘Muuu-uum,’ the children shout, limping in through the door, ‘I’ve got duck poo on my feet.’

‘At least they’re good in the garden,’ I countered brightly over an outside lunch somewhat marred by the odour of duck manure baking on the sunny lawn. ‘See that?’ I gestured towards a raised vegetable bed into which all eight ducks had clambered. ‘They’re picking off all the bugs.’
However, closer inspection revealed the ducks had stripped the entire kale patch of its greenery, leaving a winter-like forest of bare stalks and branches. 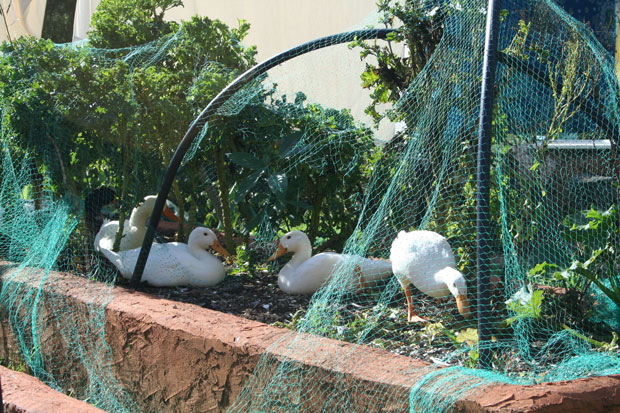 Ducks in the kale bed.

‘Sticky roast duck, with rice paper rolls?’ I overheard a chef friend quietly murmuring to James when he visited us the other weekend.
Although five-year-old Vita is threatening to join me as a vegetarian if her father commits duckicide, at least some of the birds are living on borrowed time. Unfortunately for them, the three older ducks have all recently developed a curly tail feather. This means they are male, and the best thing to do with a boy duck, so I’m told, is to eat him.

‘Otherwise, they turn into vile rapists who’d murder the ducklings with their crazy desires and wicked ways,’ I’ve been warned.
Arthur, Chamomile and Patu eyed me mildly from beneath the lemon tree as I put this to them. 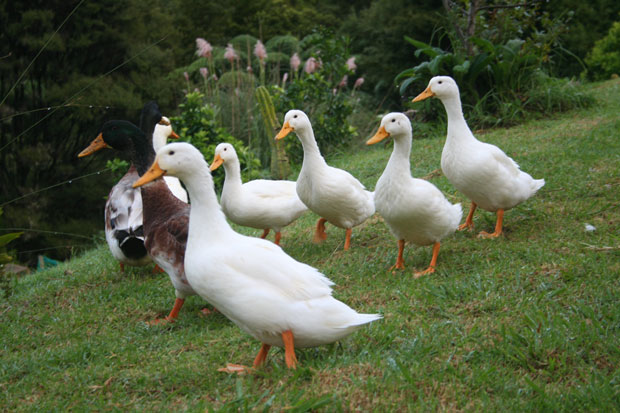 Hobbling about like old men with dicky hips, they seem incapable of anything untoward or violent. Still, part of my learning curve with ducks so far has been to heed the advice of others.

While James waits with a sharpened knife for our drakes to turn brutal, I’ve instigated a new feeding policy for the ducklings.
Unfortunately, it’s taking two-year-old Zen just as long as the birds to learn that their new dining area is strictly away by the chook house, but I’m optimistic they’ll soon forge new neural and webbed-feet pathways down to the bottom lawn and leave us in peace.

Meanwhile, James has been letting off steam in the kitchen as he pressure cooks his way through our old, eggless chickens instead.

Blog: The case of the disappearing duck