Jim gets trapped in the grey area between playful adventure and cotton wool parenting.

Sometimes it’s okay to be ignored when you’re a mum or dad handing out advice. It happened to me the other day when the eldest asked if we had some rope that would be good for towing. “What needs to be towed?” I asked. The plan was to use her motorised scooter to tow her mate on a skateboard. “That’s a dumb idea,” I said. “It’s dangerous and you’re not to do it.” 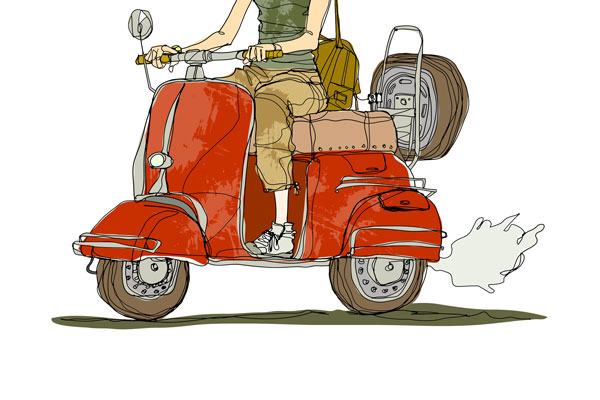 Soon however, there were cackles of laughter rising in the alleyway that runs beside our house to the park behind. The pair proceeded to perfect the idea when they got to the park as the mate was towed across the field on a boogie board. They were told off by “an old lady” but I found it tough to muster any form of disapproval, especially after I’d seen the videos. They were kids having fun – a bit risky, for sure, but still just fun.

According to the media, this physical form of diversion is a dying habit among Kiwi kids. More and more children are addicted to devices and screens, leading to everything from spine and neck issues to obesity. There’s plenty of screen time in our family, but thankfully there’s still a sense of adventure and a willingness to do stuff, rather than just watch it.

Both girls have attended Scouts youth groups (the youngest is still involved), a wonderful experience, taking them into the outdoors regularly. They’ve also tried sports and activities from netball and basketball, to dancing and drama, rock climbing and running, surfing, skiing and surf life saving. It’s expensive, parents become glorified taxi drivers and it can be exhausting, but it’s totally worth it.

What is evident with this generation is that, most of the time, activities have to be planned. Spontaneous play seems to be fading away. That’s why it’s great when the girls’ mates come over – and they disappear to the beach or the park.  And it’s hard to be the safety monitor without being a hypocrite. Three of my four sisters had scooters when I was in my mid-teens and my best mate and I would regularly pinch them to ride up Mt Albert where we lived in Auckland. Crashes were a regular occurrence, as was wiping off the grass stains when we returned them (hopefully undetected).

When I was a kid, ramps were built for bikes, forts made and defended, trees climbed. We had two massive palm trees and the big fronds were used as swings, knowing they could pull loose and you’d fall to the ground. One of my brother’s mates broke both his wrist doing just this – proof that we did some dumb stuff, too. But we have to let our kids play, to test their limits, to stumble so that they learn how to get up, and to fall off so they can climb back on.

The tough part is to watch your child put themselves at risk, knowing the potential consequences and fearing the trip to Starship Hospital. Even worse is when they force you to follow them off the cliff into the water, down the slide, into the surf, onto the flying fox or across the wire bridge. Understanding the potential for damage is not good for the nerves, which is why I’ve tried to avoid the conversation when the eldest suggests she’d like to play rugby next year.

And it’s why we warn them about towing their mates behind scooters. But it doesn’t mean they should always listen. Sometimes you have to learn the painful way.
My wife was shocked when she found out what the eldest had done. She glared at me as the unfit parent I was. As I tried to mollify her, the eldest fired up the videos of them scooting and sliding across the park. Slowly but surely my wife’s frown changed to a grin and then a giggle.

“It was so much fun,” our daughter enthused, before dialing up that smile that only means she’s up to no good. “So Dad, do you think I can use the ute to tow my mates through the water at the beach?”