Polly digs deep to make sense of a world that keeps spinning despite the family’s ongoing efforts to slow it.

James’ new job brought 13-hour work days and long weeks away. As he embarked upon it, time gained the momentum of a runaway train, swallowing months and reducing life to a series of flickering snapshots as it hurtled along.

Pinned to the couch of an evening, reconvening after the kids were asleep, we listened to the clattering wheels spinning faster and faster as we searched for the brakes. The children’s pursuits, work requirements, diaries filled with commitments, home-schooling and homesteading; all fuel for the boiler. What to remove or reduce? A full life is vibrant with colour, pattern and new experiences but when the cogs whirl in highest gear for too long everything blurs to confusion; laundry piles up like crumpled mountains, weeds storm the vegetable beds and chaos seeps in at the edges. Some internal alarm clock has made predawn my silent time. Lying in bed, with the soft breath of a sleeping family around me, I watch the stars in the black, glowing sky slide imperceptibly westwards as the earth slowly turns. In the foreground, the forest is another darkness; denser, more finite. The tree-spiked silhouette of the ridge is motionless on these crystalline nights. At 2am stillness is an anchor. Just stop. Lower the weight of your mind through the shifting currents; let it down, let it down. Watch the busy surface recede. I love being awake at this hour. Nobody wants me to talk.

We’re questioning our sanity, James and me. While our bank balances are looking nourished, without time it doesn’t much feel like increased wealth. There’s an end-goal to this, we remind each other. It’s not just a tail-chasing journey of productivity for productivity’s sake. But when is enough, enough? With two cars, a house and about 15 hectares of land, we’d  be the envy of much of the world. Yet this spring, for the first time, we lack the hours to grow next year’s potatoes and kumara. 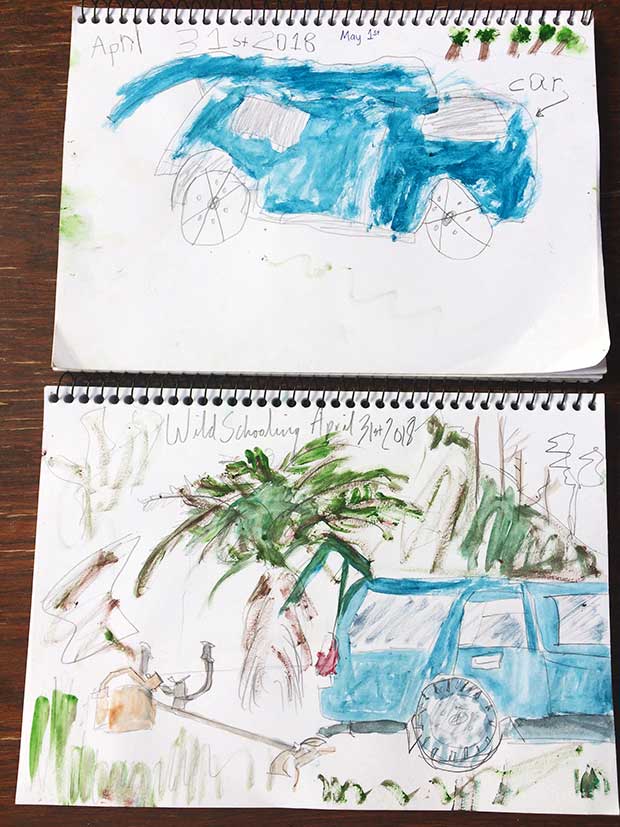 Fallow soil is not unproductive. Fallow time isn’t idle either. When the quietened mind stops to listen, a more profound intelligence makes itself heard. There is time, it says. The art of going slow exists in observing the details. Find the beauty. Get back outdoors.

This is what I want to gift the children. At ages four and seven, they’re naturals at exploration and wonderment but I want to help them maintain their bond to the earth so they remember what’s real when they’re adults and don’t become lost; skimming ceaselessly across the world’s surface, chasing ephemeral and negligible aspirations.
Nature journaling offers anchorage. Our first sessions ended in frustrated tears. Next, the children vacillated between rage at their inability to replicate what was before them, and tremendous pride when they persevered. 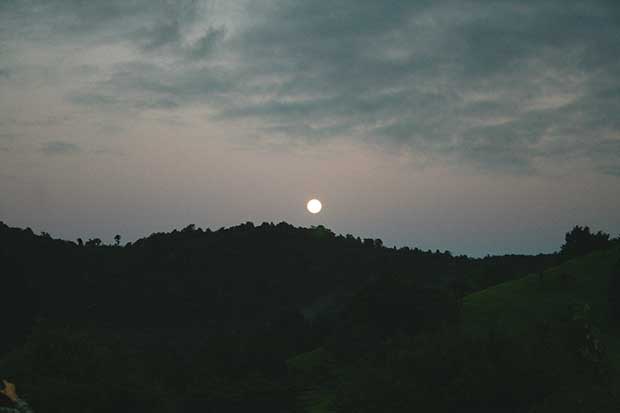 Gradually they cottoned on that it wasn’t about producing great artwork; it was about being fascinated in what they were seeing; investigating, asking questions and taking time to notice the minutiae. Soon we were matching birds with their calls; greeting plants by title and distinguishing three-lined hover-flies from iridescent blues. Knowing a name brings intimacy and a sense of connection.

James was only pretending to listen as I extolled the new family hobby. He almost had me fooled but then he took the kids out for a nature-journaling session of his own. On his return, three sketchbooks were proudly opened for inspection. From a whole forest of subject material, what had they studied? “What?” he asked as I burst into laughter at everyone’s drawing of the family car.

Meanwhile, foxgloves have risen again from the land, pealing out summer with their tubular bells, and we’re reaching for our holiday bags, James and I, anticipating the moment we can clamber from this careering year. As 2018 shunts to a sidetrack and before the departing new year gains momentum, there’ll be space in which to exhale deeply.