While townies flock to the campgrounds to get away from it all, for bush baby Polly the holiday park is a chance to reconnect.

The new tent was our getaway plan. Unlike our palatial multi-roomed affair that requires a trailer for transportation and a marriage counsellor to restore harmony following its protracted construction, the four-person Romin’ is lightweight, compact and snaps together in 10 smiling minutes.
We whipped it up for the first time during Easter weekend. Everything was going well until I brought out the mattresses. Suddenly it was apparent the tent had been designed with corpse-pose in mind for its sleepers. If the kids’ mats went in, there wasn’t room for the airbed. If the airbed went in, there was just a 30cm sliver of space down one side to slot a slender child. Using cunning marketing, we sold the gap to six-year-old Vita and agreed to plonk three-year-old Zen down between us.
With a home in the back of beyond, we didn’t need to get away from it all. Instead, we came down from the hills to mingle.
Campgrounds are anthropological feasting grounds. 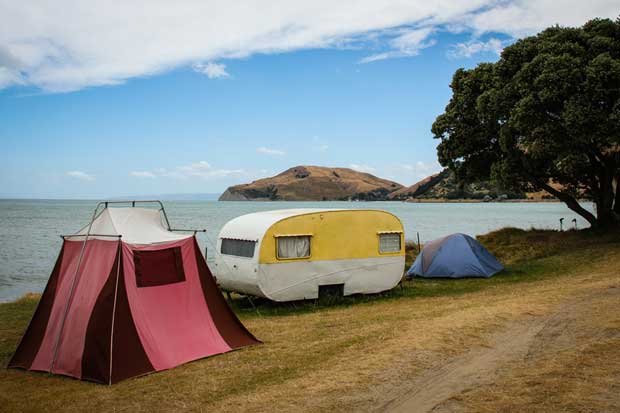 Even with tents as big as houses, most people push their inflatable couches and deck chairs into the open to lounge, loll and sprawl on the grass. There’s an inherent friendliness in these makeshift villages; formalities are as gauzy as nylon tent walls and everyone accepts you can’t help but gaze into other people’s lives during the hike to the loo.
Our holiday was spontaneous; we’d forgotten the camping table, chilly-bin, kettle, mugs and picnic mat but, we agreed, there was something nice about operating at ground level and our friends were happy to share their cups and ice. They’d run out of gas and lost their lighter.
Families around us were taking their camping much more seriously. There were kitchen gazebos with shelving, zippered pantries and benches with sinks. Fancy clotheslines swung in the sea breeze. Solar panels for fridges and stereos were aimed at the sun, but everyone was in the same bare feet and campground children soon formed a raggedy tribe.
After sunset, generational gaps became chasms. Young people with parties in mind congregated loudly around speakers that pulsed out frenetic rhythms. Parents with wailing babies seethed at the noise as they tried to jiggle sleep into resistant little bodies, while older couples sealed themselves into camper vans and drew the blinds.
We were part of that group whose offspring had disappeared to the playground. We sat in deck-chaired circles, talking and laughing as the night wrapped around us until children, hyped or weepy with tiredness, materialised out of shadows and reminded us that bedtimes were well overdue.
It was a long night. Even after distant parties had been subdued, wild shrieks and cheers erupted in hot spots of sudden revelry that made me smile for the memories they fanned. Across the way, a drunken argument was in progress and I listened with mild interest, trying to follow an increasingly tangled logic.
The airbed had sagged to the point where each time James moved to escape Zen’s flailing limbs; I rose and fell in a corresponding rhythm.
At 2am we both laughed out loud in despair. 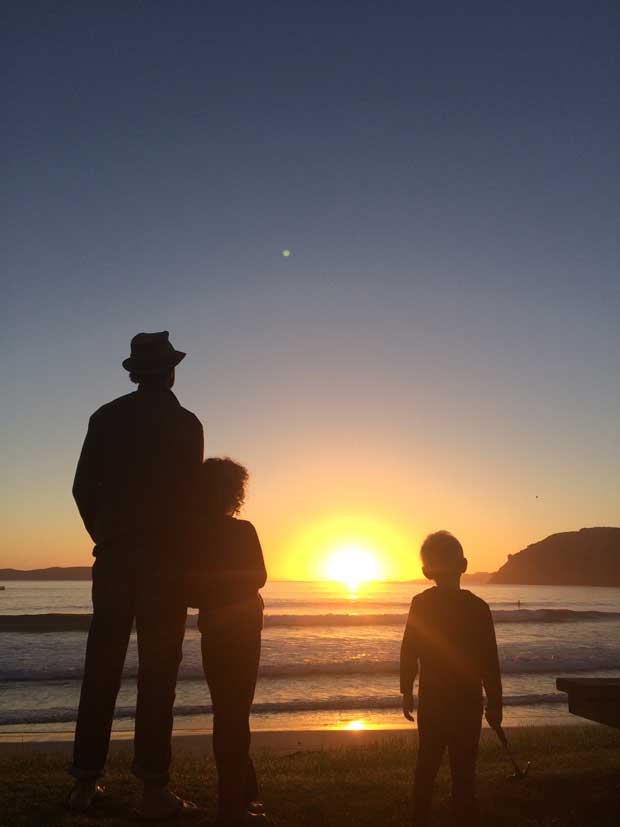 At dawn we hurried the moaning children down to the beach where we stood on a grassy bank overlooking the crescent of sand materialising from grainy darkness. Great arms of land held a bay stippled silver with shifting black corrugations of surf rolling in. The ocean sang of white noise and far-flung horizons.

A surfer hurried past.
‘Why’s he running?’ Vita asked as we watched him jog into the water and paddle through the blue/grey roil of roaring surf.
Because time is passing and now keeps unfolding with each curling wave.
Life condenses when the swell’s lifting you to a perfect point. There; poised on the crest of the whole heaving ocean.
Lose yourself. There’s no room on a surfboard for your tiresome mind with its head-thoughts and nagging anxieties. Leap crouching onto now. Surfing’s a state to be entered; a freedom to balance upon; riding it moment by moment as it carries you back in to shore.
My daughter silently watched the surfer answer her question as he hurtled down wave-fronts while others hastened over the wet sand to join him.
We run to catch a feeling, their urgency said; to affirm we’re alive.

Apricot light seeped up from the east. Other people joined us in ones and twos. Black silhouettes waiting in silence. Sunrises are a spectator sport.
Zen had brought his hammer and was inspecting a park bench.
‘Might just whack in the nails,’ he muttered with a rain of ringing blows.
In church there are sneezes and whispers. On the beach a coughing tractor backed a boat into the sea.
It was Easter Sunday and the cathedral’s vast vaulted ceiling was lifting. Sea spray turned the air hazy. Day was coming; the sun riding up like a god.
‘What’s that light?’ Vita squeaked in excitement as liquid fire blazed the rim of a distant island. A boat engine spluttered. Crashing waves were the choir. Up up it came; all glory and gold. Rising and spreading warmth across people’s faces so that strangers were suddenly smiling at one another. As it climbed, the sun laid a gilded pathway across the dancing water right to us. The morning felt consecrated. Colour was filling the world.
Bang bang bang went Zen’s hammer behind me. It sounded like applause.