Jim is banned from buying certain items on his daughters’ behalf.

They were in an awful state. Ripped around the top, the elastic band all but divorced from the actual underpants to the point where wearing them was just ridiculous. So rather than hang them on the line, I tossed them in the bin.

Later in the evening I made mention of it. “Not sure whose undies those were in the washing but they were so ripped I threw them out.”

I suggested she let me know her size and I could pop to Farmers the next day and buy some replacements. I might as well as have offered to run naked down Queen St such was the opposition to me going underwear shopping for the girls. My wife said that was simply not on, while the youngest, who had somehow inveigled herself between me and the best part of the couch, set out to explain what was wrong with my suggestion. There were things, she said, that were never to be on my shopping list. 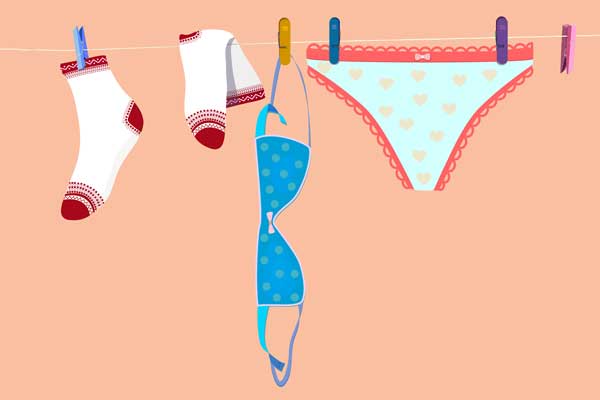 “Mushrooms,” she began, “broccoli, celery, salad in a bag and lettuce.” She thinks she’s funny. And this from a girl who the other day headed to the bakery department in the supermarket leaving me (with the help of photos supplied by my wife of the empty packets) to shop for feminine products.

So there is some hypocrisy at work here. But I’m okay with that because I operate on that level with the girls. I often explain to them the hypocrisy of parenting which requires them to do as I say, not as I do. But back to the shopping. When did it become unacceptable for me to buy underwear for the girls? It slipped past without me realising.

There were times when I bought them in 10 packs while travelling in Europe or South Africa – colourful undies that usually had Disney characters or the Big Five from Africa on them. Those were the days when the girls would often proudly declare they were wearing their elephant or Cinderella undies that day.

Those days are gone. Now my “purchases” are often online payments for one event or another with the Bank of Mum and Dad still in heavy demand. When does that end, I wonder? If I can’t buy them undies, can I withdraw from other expenses?

With the eldest soon to be allowed to drive by herself, my ute will be in high demand. Does she help pay for the fuel? What happens if she has an accident? Who covers the excess? My mate recently told me about his Dad’s rule for being allowed to drive the car – there had to be enough money saved to pay the insurance excess in case of a prang. Seemed reasonable to me but the eldest explained that the excess today was the same price as a cheap car. Whenever she talks about buying her own car, I remind her that that’s the easy bit. Insurance, WoF, registration, repairs (because it would be an old banger) and fuel are the persistently costly bits. She just smiles at me.

And then there’s the endless stream of events that cost me money. She bought her own Six60 concert ticket but the 12-year-old thinks she should go too and that her parents should pay for it. My first concert wasn’t until I was 14 and I got in for free as some older lads pulled down a large portion of the fence at Western Springs. We walked in and illegally watched The Police. There was never any thought given to Mum forking out for anything but the necessities – it’s just the way it was.

Today there are so many expenses she didn’t have to consider saying “no” to. Broadband is one, followed hard on the heals by Sky, Netflix and Spotify. Then there are phones and computers (the latter required for school) and the ever-increasing cost of sport.

There will, I’m sure (at least I think I’m sure) come a day when the kids are financially self-sufficient, but it seems a long way off.

And they are fiendishly good at outfoxing me when it comes to doling out the dosh. The eldest wanted a fancy drink bottle from Kathmandu and I had a $20 voucher that I said she could use. I thought we were going halves but she bought the bottle on special.

Perhaps I should get those ripped undies back out of the bin.