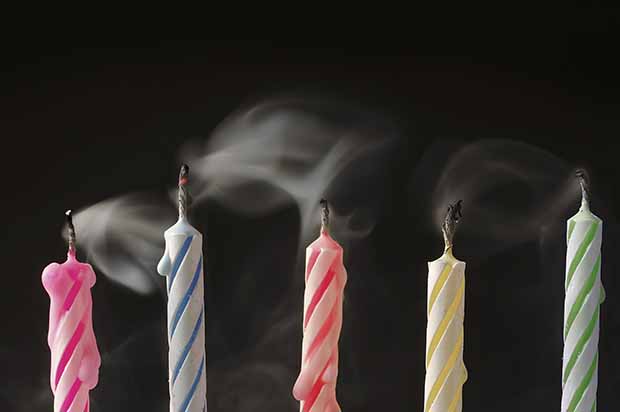 As Jim celebrates his 49th year, he reflects on how birthdays tend to matter less when you are older,  that is, unless you have children.

It’s now one year from halfway. Halfway to a royal epistle from Buckingham Palace. Midway to raising my bat for a century. Or, as my older brother said, one year to plan the party.

Birthdays lose their meaning the more of them you have – turning 49 was a bit bland.

Turning five is a big year for parents because it’s off to school and out of our hair from 9-3. Ten is double digits and 13 the start of the teens; 15 was driving and now that’s 16 and then at 18 you can vote, fight for your country and buy a beer. And the 21st remains a big night. But, as the candles become too many to cram on the cake, birthdays tend to matter less. That is, unless you have children.

My two girls love a birthday – their own, first and second, but other people’s too – and they seemed to relish my latest one.

“I hope you have a great day and enjoy being 49,” the youngest wrote, before adding her 12 years of cheeky wisdom.

As if turning 50 is life’s precipice. It’s a view she seems to share with her big sister who asked, as we drove home one night, if we were going out for birthday breakfast.

“Come on Dad, you’re turning 49. It’s downhill to 50 mate and from there…” she made a sort of skiing down hill gesture with her hand.

More stories you might like:
Lucy Corry's blog: What is New Zealand's most comforting biscuit? An ode to the humble Krispie

“You’ve got to make the most of these occasions,” she offered.

So, not for the first time, I reminded her of my plan to be around in 2069 when I expect to get a message from, perhaps, King George. It won’t be a telegram, of course. By then he might send a hologram of himself wishing me all the best, who knows, but that’s the plan.

As we get older we tend to celebrate the ends of decades, not the eve of the end. I proposed on my 30th birthday confident the answer wasn’t going to ruin the night ahead. It caught her by surprise. We were in Auckland, up from Wellington, and staying at Mum’s. She’d been out shopping with my sisters most of the day and when she came home misread my state of agitation.

So when I suggested we go for a walk she thought it was so I could get a few things off my chest. It was, but not what she thought. When I popped the question she said, with a stunned look, “Who me?” as if there was ever anyone else. Mum read the mood a lot better because when we got back to her place she started congratulating us before we had even told her the news. She always was a first grade detective.

I’d met my wife a week before my 25th birthday and I still have the shirt she gave me for that birthday – much to her dismay.

Though we are actually very close in age, my wife, who looks a lot younger than she is, has always convincingly lied about her age. To her delight she is still occasionally asked for ID when buying booze. Sadly, that’s never happened to me.

Age is marked these days in two distinctly different ways. The adults of my childhood are dying, and the children of my adulthood are growing up. Photos pop up regularly on Facebook of them heading off to school balls, starting university or departing for their OEs and it’s always a shock to see the little tots that live in my memory are now impressive young adults.

That, more than anything else, makes me feel my age.

My wife loves a good birthday party especially when she’s organised it but there are few things she dislikes (hates is perhaps a more accurate description but it’s such an ugly word) more than celebrating her own birthday. For her 40th I’d organised a weekend away in Taupo. She initially thought it was just us but when she realised I had invited lots of our friends too, she was furious. And I mean furious. She got over it.

As unremarkable as turning 49 was, it did contain a special footnote as it was the 25th birthday my wife and I have shared. That’s more birthdays with her, than without her.

Growing old isn’t so bad when you do it together.