Jim Kayes has been a journalist for 25 years. He survived growing up with four sisters and is now married with two daughters. Despite this, he thinks he’s in charge and brave enough to lead his daughters towards adulthood.

There are phrases, I’m realising, that strike fear into my heart as a Dad. “Dad, can you help me with my maths homework?” Um, no. Another, I’m yet to hear, but one I know is on its way, “Dad, this is my boyfriend…”

This one seemed so innocuous at the time. “Dad,” she said, “will you give me a driving lesson?” I readily agreed as her learning to drive signalled an end to my days as an unpaid and over-worked taxi driver. I should have known better. 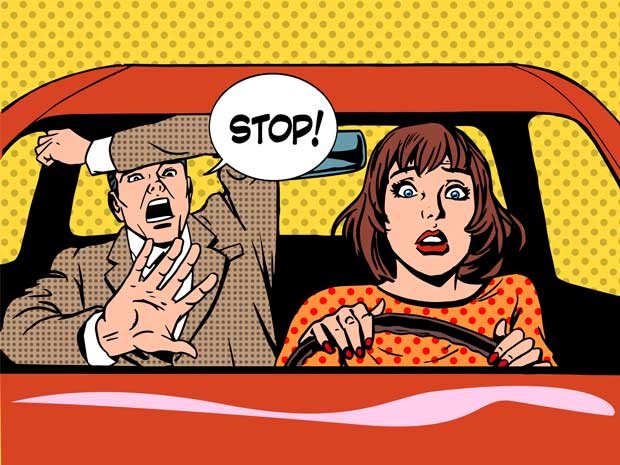 When I learnt to drive David Lange had just replaced Rob Muldoon as Prime Minister, The Narcs were at No1 with You took me Heart and Soul and Dame Valerie Adams was born. Actually, this all happened in the year I got my licence. I had learned to drive much earlier than that because they were simpler times.

About 3.2 million people lived in New Zealand back then and, with no Sunday trading, shopping mall carparks were a handy place to hone necessary driving skills especially steering and stopping. I remember taking my sister’s friend’s car for a blast and she screaming in fear as the various trolley bays and lamp posts loomed fast and large. I now know that fear.

It was my brother who taught me to drive, and I was happy to practise on the return leg from his rugby games most Saturdays. We had a Holden Special station wagon with the wind-down back window and three gears on the steering column. The bolts that held the front bench seat to the floor were a bit hit and miss, so we had a beer crate in the floor well at the back that stopped the seat from tipping. It worked a treat.

But things didn’t always go to plan. One day, having taken a corner too fast I plopped into a soft bank. After a few moments of quiet reflection, my big bro simply said: “Stick it in reverse and don’t tell the Old Girl”. Sound advice.

Getting a driver’s licence in 1984 was pretty straight forward. There was an oral and multi-choice exam and then the practical. I drove to the practical as Mum was busy with our large family. So, sensibly, I’d quietly slipped away to become legal.

The plan almost came unstuck when I arrived at the Morningside office, and the traffic officer (as they were known back then) asked how I’d got there. I pointed lamely to the nearby dairy and said Mum was inside. I thought he believed me.

Today’s various stages to obtaining a licence and multiple rules around when kids can and can’t drive are so much more complicated. I’m sure it all makes sense. Just as I’ve had to switch from forms to years at school, I’ll learn as I go.

Despite there being more (many more) cars on the road these days and seven-day-a-week-shopping we head for a nearby park. When it comes time to switch seats I freeze. “Come on Dad, she’ll be right,” my eldest says with the beguilingly beautiful smile that I know will cause me more problems over the next few years than learning to drive.

I get out, and she scoots over. She was there, ready to go, seatbelt clicked, seat position adjusted before I’d even made it to the passenger door. I still don’t know if this is a good thing or not, but her first question is “What’s the speed limit?”

In an automatic, the mechanics of driving are straight forward, so there’s none of the graunching of gears and bunny hops that used to distinguish the learner driver. But there is still the basic rule of staying on the left. The left. Yes, the left. That’s right, the left. I say this while trying desperately to stay calm and sotto of voice. She’s left handed. What’s so hard about staying left?

I taught her how to reverse, how to use the wing and rear view mirrors, and to be a wary of things like posts and bollards which seem, mysteriously, to move when her mother, my lovely wife, is reversing. I let her drive a little bit up the road from the park on the way home but changed my mind when I saw another car heading our way. She claims I yelled at her. That I screamed “Pull over now, right now!” in an almost hysterical voice, and that I may have sworn. I don’t think I did, but as my life was flashing before my eyes at the time, I can’t say for sure.

One thing I do know is that I passed my licence the first time but that I hadn’t fooled the testing officer. “Last time you drive illegally, eh son,” he noted, before delivering another line that chilled my young heart. “It wouldn’t pay for me to catching you speeding.”

It kept me in check for quite a while, but on reflection, it’s not as terrifying as what I heard this morning.

“Dad,” she said with a smile, “can you give me another driving lesson this weekend?”