Karen Rhind and Smudge (who has not strayed far from her side since being picked as a puppy in Temuka 11 years ago) are surrounded here by lavender ‘Grosso’.

For a lavender enthusiast and landscape designer, crafting a wild and beautiful garden in one of the country’s most inhospitable environments was an expression of letting go.

The Central Otago sky is a watercolour backdrop – and the plant palette in Karen Rhind’s Bannockburn garden makes up the ‘brushes’ that wash it with delicate hues: the fragrant tips of green bushels dipped in lavender and violet; ticklish grasses in shades of blonde, and olive trees thick with bristles of glass-green and silver leaves.

In summer, the garden paints the sky lazily, as the drifting breeze moves the blue oat grass in long sweeping patterns, barely touching the wisps of white cloud that scud across the cornflower-coloured ceiling. In winter, ice hardens the earth and the cold makes the brushes brittle, their strokes messy, dark, dramatic. 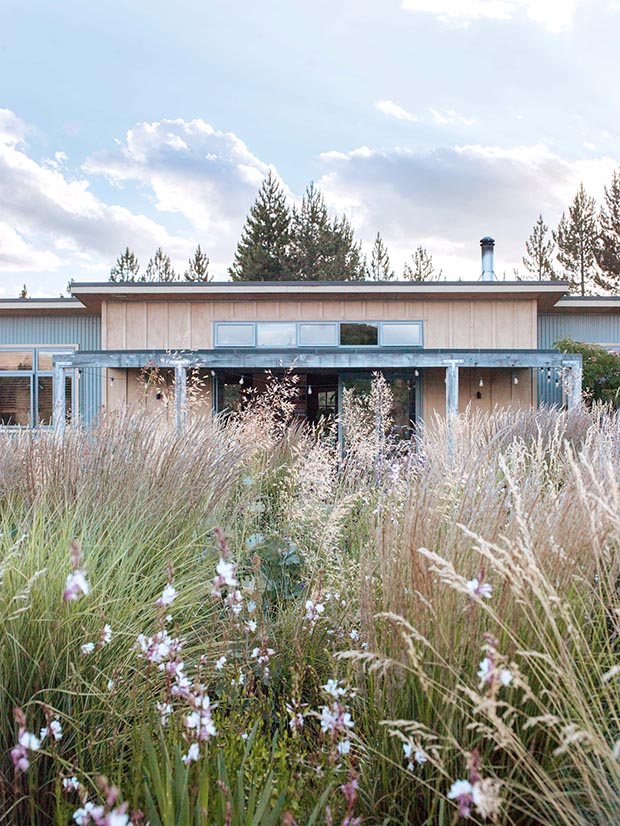 Karen’s garden shifts from feathery-light in the dry garden to the pointed spikes of Agave americana, Aloe polyphylla, and big-hearted ‘Green Globe’ artichokes. She is often found in one of her reading nooks – either on the porch, which acts as an extension of the lounge, or overlooking the Kawarau arm of Lake Dunstan.

Only five years ago Karen Rhind’s living masterpiece was a blank canvas. When she signed the deed in 2013, with the flourish of a pen, a dry, crunchy hectare of land with a mature 90-tree olive grove became hers.

The blank canvas was also a blank slate – her relationship had ended, her children were finding their way at university, and she had sold Briar Dell, the Garden of National Significance that she had spent the previous two decades developing. It was time to start again, without constraint or guidelines. This time, the garden was hers and hers alone. 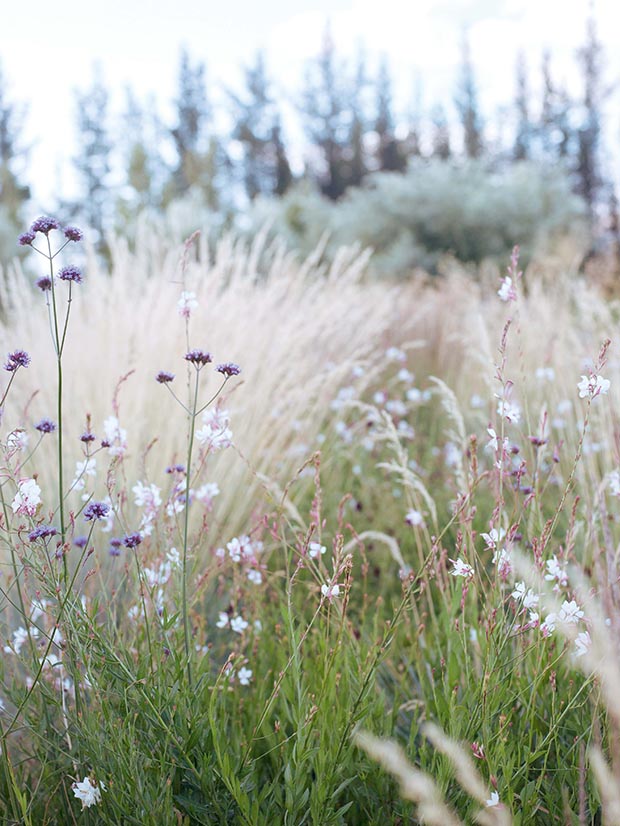 Karen planted the perennial garden where grasses include Calamagrostis ‘Overdam’ and blue oat grass, and the flowers Verbena bonariensis, as well as Gaura lindheimeri ‘The Bride’ and ‘Whirling Butterflies’.

Karen’s father was a schoolteacher and even though the family bounced around the South Island following his career, Cromwell was always home. She thrived here, turning the Central Otago hills into her playground where she built lopsided huts.

She was always more into design than potting plants, much to her mother’s disappointment. Instead of her daughter getting her hands dirty pulling weeds, Karen would be distracted redesigning the courtyard. The 90-tree olive grove is made up of two Italian varietals, Olea ‘Frantoio’, and Olea ‘Leccino’. Last year, Karen was able to produce 35 litres of olive oil to sell at The Tent House.

With a certificate in horticulture and several landscaping courses under her gardening belt, Karen set about achieving one of her business goals: to be her own boss. She returned to Cromwell after a stint away and, in between raising her young family, began developing Briar Dell, a two-hectare property with just a few established trees.

She started growing and selling herbs, then morphed that business into an at-home nursery, which naturally overflowed into the surrounding garden. The moment she turned her back, customers would slip out the door, only to be discovered half an hour later still wandering around her garden and grounds, collecting inspiration like a bouquet. 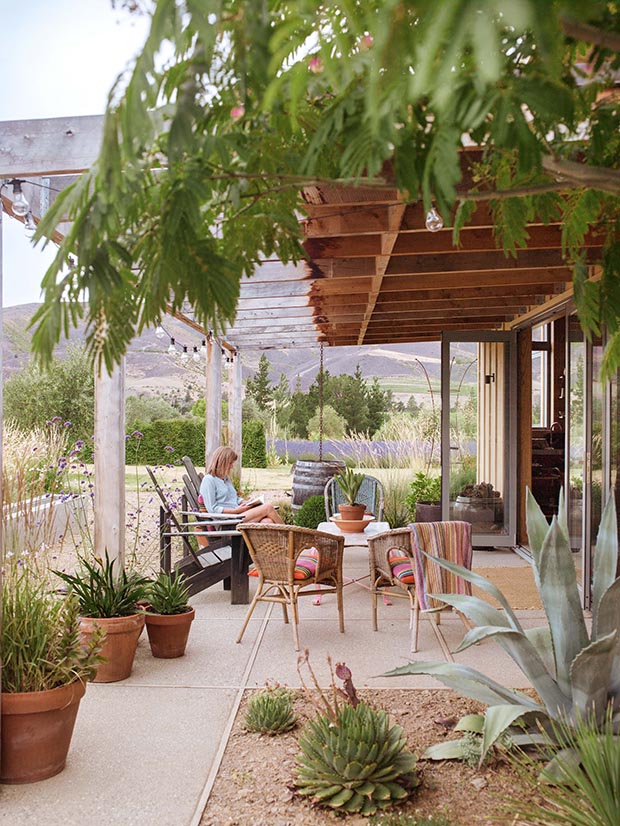 Deciding to embrace her curious visitors rather than shoo them away, Briar Dell became a registered Garden of National Significance in 2005.

When her relationship ended in 2012, Karen sold Briar Dell and approached the property market with refreshed vision. “I wanted a garden that was for me, for my benefit alone and that didn’t need constant upkeep. I still wanted to continue to grow plants for public use, but the garden is my quiet space.” 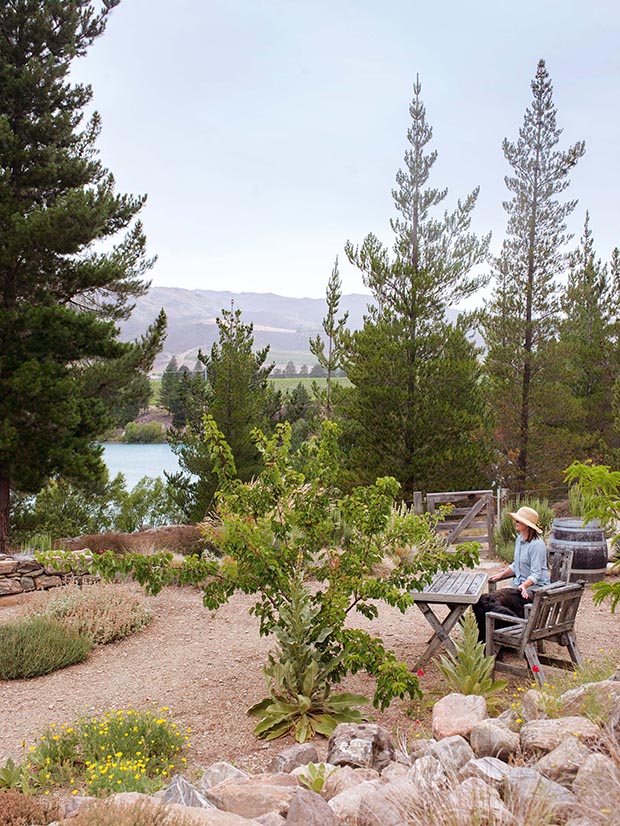 A 20-year-old subdivision near Bannockburn proved her perfect patch, hugged in a friendly embrace by the nearby ranges. The towns of Cromwell and Bannockburn are both within walking distance (the wineries too, depending on your level of desperation and dehydration) and the lakes are a skimming-stone’s throw away.

“The land feels good to me. It reminds me of the holidays – the sun and heat, the feeling of sand underfoot and the smell of pine,” says Karen. It’s an entirely different property to Briar Dell, less formal, structured and “gardening-y”. The concrete rill is a water feature with ancient roots; early Romans chilled wine in them and Persians used rills to cool their gardens. Karen’s is a place to perch when the Central Otago heat reaches scorching.

While Briar Dell was sheltered, enclosed and had excellent soil, this had free-draining pure sand with established pines surrounding it. “But it has this gorgeous soul. It’s not wild as such, but there’s an untamed loveliness.”

The now-established garden has barely strayed from her original plan. The property leans into the landscape, rather than fighting it for attention. Karen thinks (probably contradictory to the opinion of non-Central Otago-ites), that the home doesn’t boast great views – mainly just big hills and big sky. The dry garden is some 27 metres in length and 8 metres wide, the plants chosen for their ability to tolerate drought. “There’s no real soil here; I’ve been adding mulch as the soil won’t hold water. It’s so hot and dry that even the weeds were dying, so I’ve had to adjust to regular watering. Lugging the hoses around keeps me fit.”

It’s a garden of low-key colour that at first glance appears to blend with the landscape. But take a closer look. There are soft, silvery, wispy grasses and little wildflowers. Karen first spotted the painting on the lounge wall while walking past a Christchurch second-hand book store. Not technically for sale, the store owner eventually conceded that it was a little large for his space.

A structured patch of lavender to one side is the only pop of colour in a garden designed not to highlight individual plants but to paint a picture of gentleness which contradicts the rocky, rugged landscape. “I try to let the plants do their own thing; I love to see interesting plants fitting in naturally in the landscape.”

Many are beautiful wildflowers such as Californian poppy and evening primrose which need little water. “It’s nice to have something that naturally evolves, that doesn’t need weeding every weekend. Self-seeding plants are the best; I’m not fussed about it being tidy.” 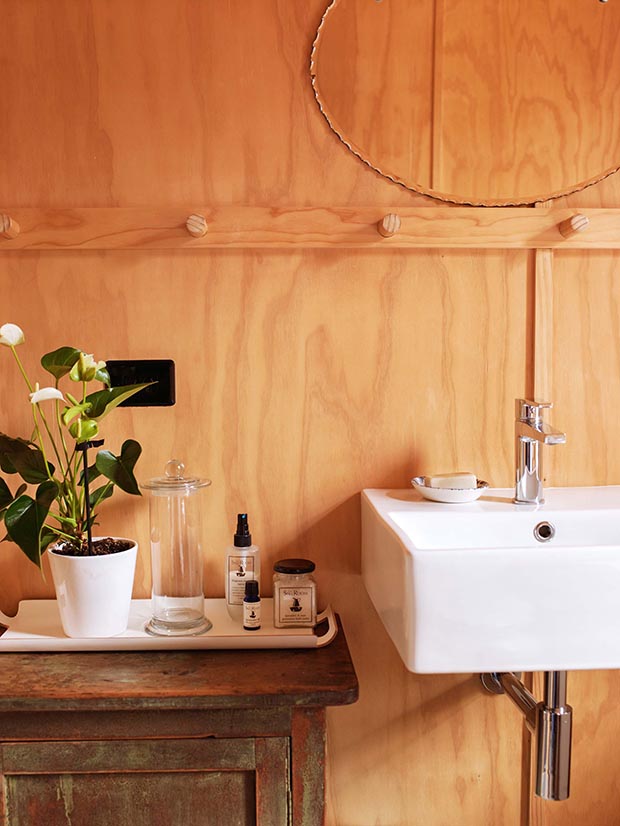 Lavender lingers throughout the home, from the bathroom (always well stocked with room spray and bath salts) to the violet views from the bedroom window.

How many plants has she put in? She laughs. No idea. Not a clue. Almost all, bar the structured hedging, were nurtured in her nursery, and would have cost a gold-miner’s fortune. Luckily, Karen grows perennials, herbs and lavender and sells them in the back courtyard of her Cromwell heritage precinct store, The Tent House.

More stories you might like:
A grandmother's artistic spirit lives on through a baby blue 1966 Hillman Imp

The idea for the Tent House was seeded while Karen was maintaining Briar Dell, but it was only in the quiet aftermath of the garden’s sale that this vision blossomed into something tangible. 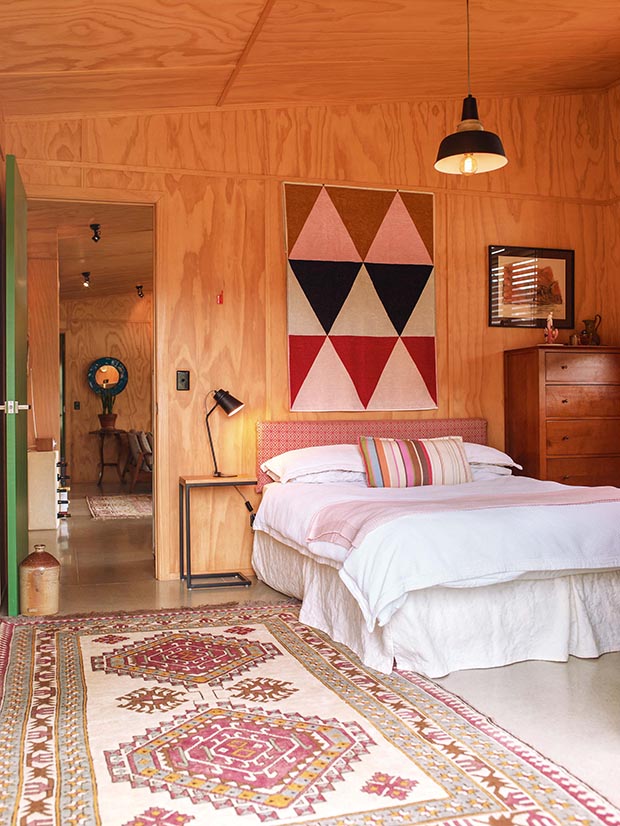 Having previously grown and sold several varieties including Grosso and Pacific Blue, she expanded this love of lavender products when The Tent House opened in 2013. “I had an interest in lavender, and access to the oil, so I read books and began to play. There have been disasters, odd-looking soaps for instance, but they never make it to the shopfront. If I’m not happy with it, then it doesn’t go out.”

This recent venture is only a little shop, so she can only fit so much in. “I hand-make and sell soaps, body oil, facial serums, essential oil and my perfume (based on the scent of Central Otago).” Smudge, Karen’s bearded collie, is a living interpretation of the dog from every child’s adventure novel. Shaggy and grey-bearded, with a lolling pink tongue and a twinkle of mischief that peeks out beneath her eye-skimming hairdo, she has many fans who like to visit regularly. She also features in several online reviews: “Nice owner, nice products, cool dog”, reads one.

Karen now has 0.4ha of lavender, split between her property and a friend’s, which produces about 8 litres of oil per harvest. The harvest takes place in January or February over three back-aching mornings, when the flowers are cut from the stems. The lavender is transported to a steam distiller at Two Paddocks in Earnscleugh near Clyde.

“It’s expensive to use but it’s big, and consistently good. I like that there’s little waste – the oil rises to the top of the distilling water and is removed, but we keep the water as it has a gentle fragrance that’s good for room scents. The flower heads end up back on the garden too, so it’s a full-circle process.” The Tent House (thetenthouse.co.nz) may have vintage charm, but it’s a more recent build than the exterior betrays. It’s named for the land; during the gold rush, fortune seekers pitched their well-worn tents here.

The store is just one of her side projects; Karen is also a landscape designer and business has been on the up and up. Most clients want low maintenance – natives, schist and weed mat – but some still want something more, and that’s when she gets excited.

“When people are passionate, interesting or creative, you can see it reflected in their garden. It may not be my cup of tea, but it’s them, and I can appreciate the style and difference. Whether a garden is clipped and maintained or wild and free, it suits the person.” Karen’s product range is created under her brand The Still Room. There is a double-meaning in play here – traditionally a still room is where oils are produced, but Karen’s first still room at Briar Dell was once the Cromwell Hospital mortuary.

So what does Karen’s garden tell us about her then? That life now is simple, understated and relaxed? That sometimes, letting life paint its own picture, rather than carefully sketching, colouring and meddling, allows true beauty to shine through? Or is it just that being in control isn’t always all it’s cracked up to be?

“One day, when I’m old, I would love to let this all go wild and watch what happens. Gardening is like raising children – at some stage, you have to stand back and let go.” 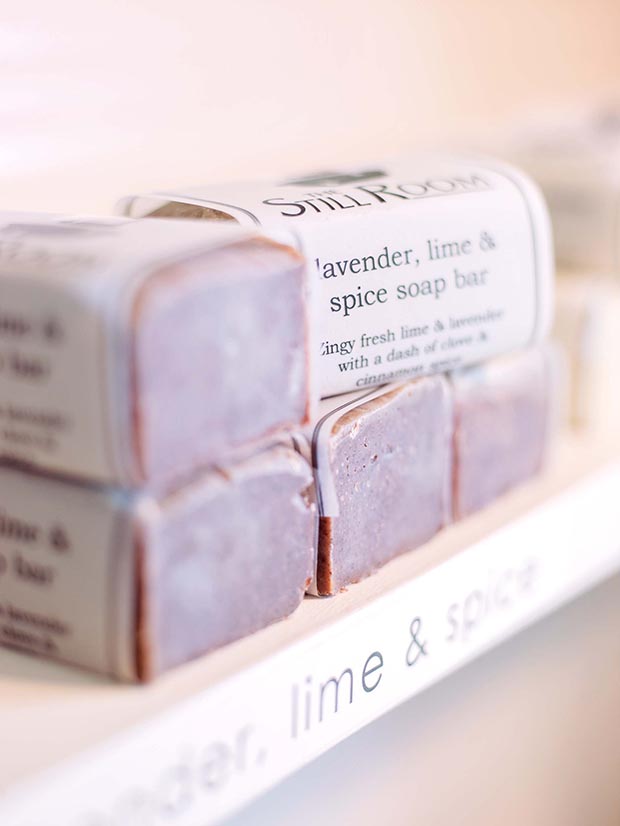 HOUSE RULES
With most of her budget allocated to the garden, Karen enlisted her draughtsman brother Jason to help turn her dream home into physical plans. “I had never built before, so the process was exciting. It took around five months and I was as hands-on as I could be, helping with insulation and finishings, putting up battens and painting walls.”

Central Otago is a near semi-arid climate, and the temperature can range from scorching to bitter in a snowfall. Passive heating (designed to harness solar energy that heats the home during winter) was a must, and the Bannockburn property boasts thick walls with large north-facing windows and doors to capture the sun. “The house has been designed around the sun – the verandah extends further to provide extra shade, and there are fewer windows on the western side. The concrete floors passively heat the house, the bedrooms are 25˚C during winter on a sunny day, and I only use a wood burner for additional warmth – the heater is still in its box.”