Kiwiana in a Fibrolite bach: Explore mid-century décor, homewares and art preserved in The Butterfly House 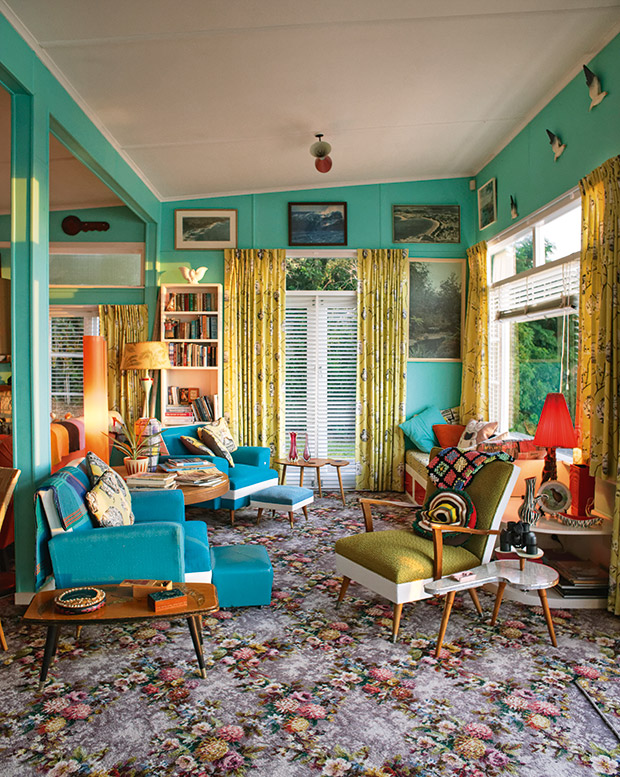 Age has not dimmed the home’s Feltex Axminster carpet (called Summer Bouquet) despite it now being well into its fourth decade and having survived a life of sand, babies and parties. Reading in a choice of armchair after a walk across this bed of flowers is the best way to enjoy the morning sun.

It’s more than a storehouse of treasured family memories, more than a good example of 1960s bach architecture. It’s a museum of its era and now it has inspired a book.

Three generations of one family (four generations actually, if the baby in the car seat is counted) set off in different directions from Auckland scouring the coast for a family bach to share for the holidays. Was it a coincidence or the force of powerful genes that saw them all, eventually and separately, converge on the same one-bedroom Fibrolite house on a site overlooking an estuary?

Each search party broke the pre-agreed rule not to look further than a radius of a one hour’s drive from the city. Each fell equally as hard for the modest Mangawhai bach, with its wire-wove beds, kapok mattresses and armchairs covered in orange moquette. 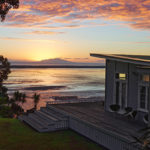 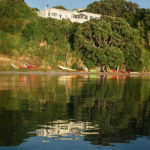 The property so utterly charmed the entire clan that they overlooked its distinctly estuarine beach and lack of home comforts. They overlooked the bare minimum of toileting facilities, although the convenience itself (an outside affair named “Harvey’s Thunder Box”) was clearly visible on the edge of the back lawn.

They saw past the confrontational interior colour scheme of pink and turquoise and, indeed, it just might have been the orange moquette that swung the deal. No beige-upon-beige colour scheme for them. 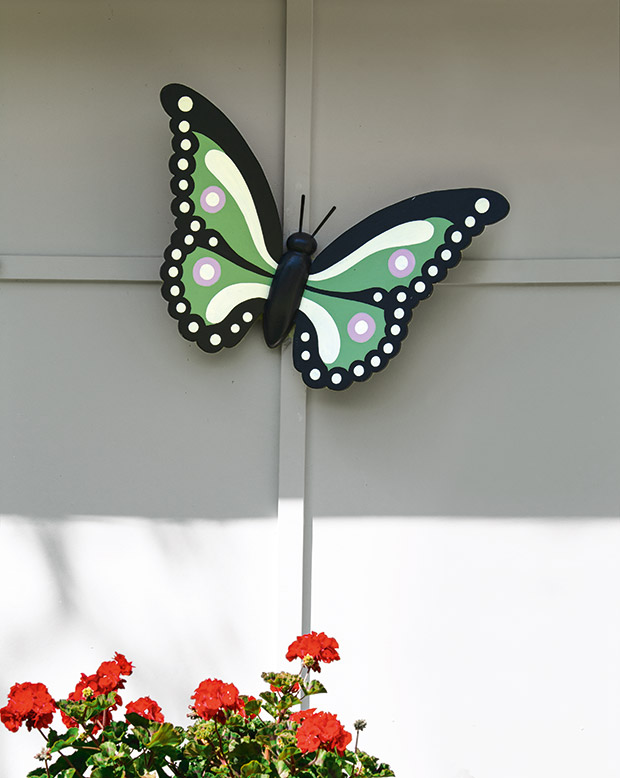 Beautiful, weather-worn, and loved until the day it fell off the wall, the original butterfly was finally replaced by this one created by great family friend, artist Dick Frizzell.

They took one long look at the bach, fell in love with the way it seemed to open its wings to the ocean, named it the Butterfly House, and added a 1950s wooden butterfly.

Well-known collector and philanthropist Chrissie Fernyhough, at that stage the middle generation of the bach-seeking family, is not known for falling in line with what everyone else fancies as fashionable. She wasn’t about to dismiss the Butterfly House’s interior as terrible, although the house would eventually see sympathetic additions double its size to accommodate the multiple generations still gravitating to it today, two decades later. Chrissie and two of her granddaughters Alice Hellriegel (front) and Grace Tattersfield return from a walk to the estuary.

Chrissie’s avid interest in the history of New Zealand décor, homewares and her knowledge of art, quickly attuned her eye to the unique interiors of the Butterfly House era. It was an excellent example of mid-century decorating and a style the family were determined to honour.

“I became focused and single-minded,“ says Chrissie of her collecting for the bach. “I was working with a background palette of bright 1950s colours — turquoises, reds, yellows and greens. Having a riot of colour allowed for reckless abandon when it came to objects.” 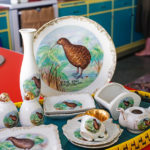 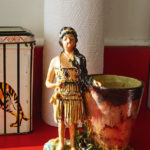 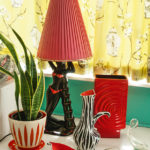 Pieces from the 1950s and 1960s, and especially everyday items, became Chrissie’s speciality. But each member of the wider family developed their own area of interest; some collecting Whites Aviation hand-coloured photographs, others the Little Golden Books series, while yet more fell prey to Crown Lynn, Tretchikoff prints and bevelled mirrors.

Finding appropriate items was easy in the 1990s. Homeowners throughout the country were busy tossing out what they regarded as “old stuff”. In feverish excitement, they filled their homes with newly imported items, which were flooding the country in the wake of disappearing import tariffs. The “new stuff” was fresh-off-the-boat from China and mostly mass-produced. 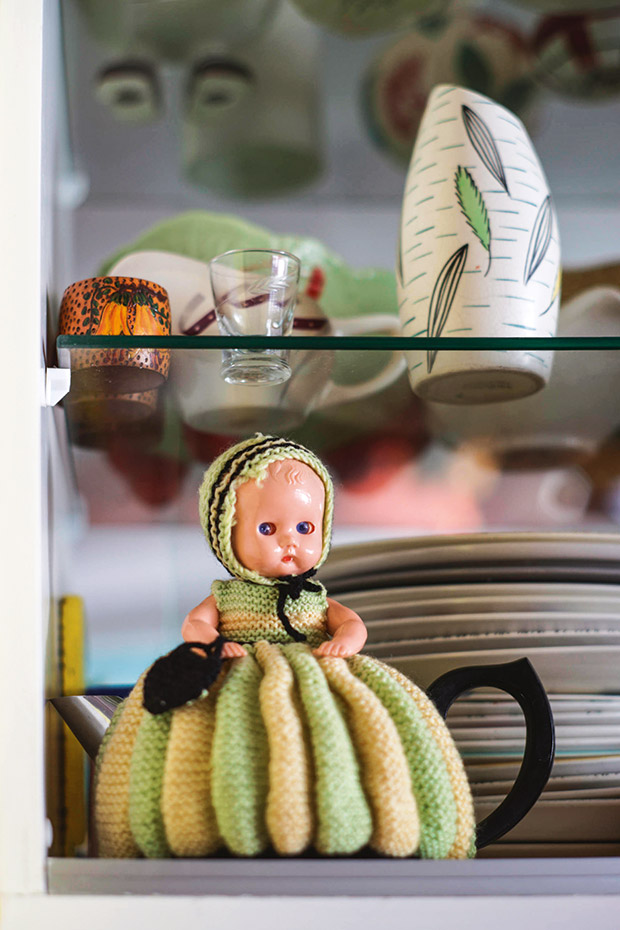 Every surface, every cupboard, and every room holds more treasure. From skateboards to sundae glasses to a delightful knitted doll with her “cozy” skirt, humour, craft and history jump out whichever way one turns.

This led to rich pickings at every weekend’s garage sale, regularly attended by Chrissie, her mother Gladys and her daughter Kate (who left the “blokes at home to look after the young ones on the promise that they could have an afternoon snooze as a reward”). However, the family was particular about what would be admitted to the Butterfly House.

A high level of aesthetic achievement was required. 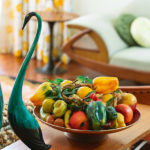 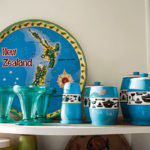 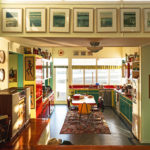 “So many treasures I bought at these early sales are still part of the décor and are still used at the Butterfly House. Encouraged by the fun of the chase and the joy of discovering a treasure at little or no cost, we ventured farther afield. We foraged in collectables shops in Auckland and elsewhere; Ngātea was a regular stop.”

More stories you might like:
Why Ōtāhuhu artist Lissy Cole is hooked on colourful crochet (and owns the word fat)

While garage sales are not so common today and have been largely replaced by online marketing, Chrissie says church op-shops are often the recipients of deceased estates and can be rich repositories of china, figurines, clothes, shoes, boots, bags and hats. Hospice shops also sell a wide range of old and the new.

“Spending holidays together with family and friends is the Kiwi dream, whether it’s by the sea or by a lake or in the bush,” says Chrissie. Today’s seaside landscape has changed, with the gentrification of surrounding houses and new subdivisions; the clusters of no-frills baches and campgrounds that have morphed into coastal townships with cafés and supermarkets. 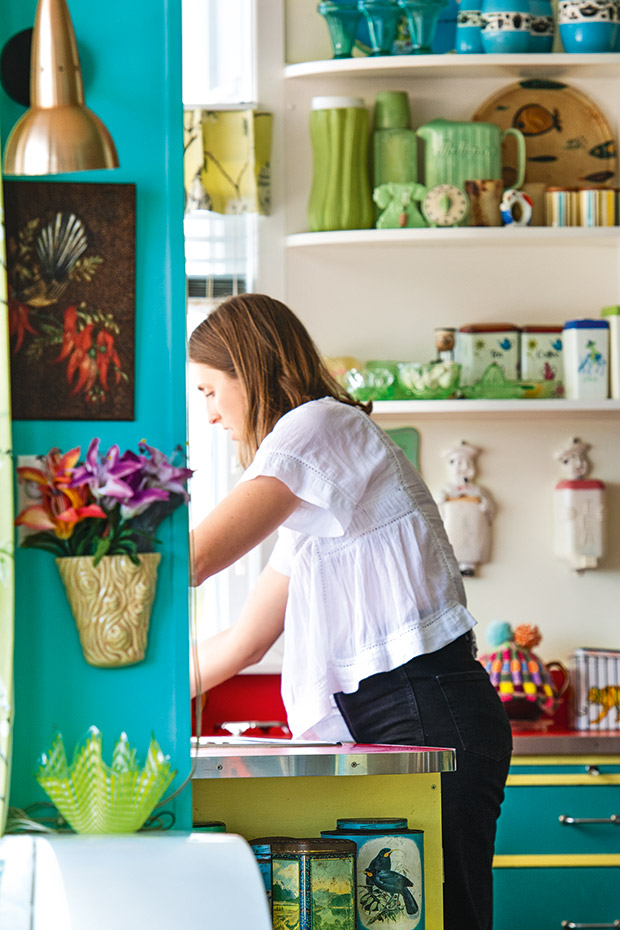 “The Kiwi dream is not defined by comfort but by our collectively buying into the uncomplicated way of life — the long breakfasts, the picnics, wearing mumus over togs, straggly, salty hair, gathering and shucking pipis and eating sausages in white bread with Wattie’s tomato sauce.”

Chrissie says she still has an abiding affection for mid-century New Zealand, when life was simpler and slower. “When we made things at home or in the shed and the factory; when there was no television, no weekend shopping, no unemployment. When families played together. It is this nostalgia that fills me with delight when I open the door to the Butterfly House.” “If guests are hungry for food or for conversation at the Butterfly House, the kitchen is the place to head,” says Chrissie. “It is where our whakapapa is passed down. It greets us in the morning with sun and warmth and says goodnight to us by candlelight.“

Today, the house remains the treasured holiday haunt of multiple generations of Chrissie’s family, all enjoying the collections so carefully put together over the years. But, most of all, they appreciate standing on the deck, inhaling the salty air and remarking on how lucky they feel to have such a bolthole.

More stories you might like:
Inside Paloma Gardens: Meet the couple who spent 45 years planting their tropical garden in Fordell

She is delighted to see that the fourth generation (that car-seated toddler of the original search along with his siblings and cousins) are today’s most avid users of the Butterfly House. Her nine grandchildren love taking their friends away for a weekend of nostalgia and fun. “The cheerful colours make it a happy place to be.”

Chrissie Fernyhough’s passion for New Zealand-made objects gradually overtook her commitment to furnish The Butterfly House in sync with its mid-century origins.

“Today, it is filled with objects that define New Zealanders, that take us back in history to our golden time and beyond. Some are used every day and are chipped and worn, dented and discoloured. Others are decorative and stand on shelves or are hung on walls to give pleasure and delight.”

Though Chrissie has read books over the years on how to accumulate and display collections, she reckons she’s getting better at it and that there are no rules, anyway. What is the difference between a collector and a hoarder? 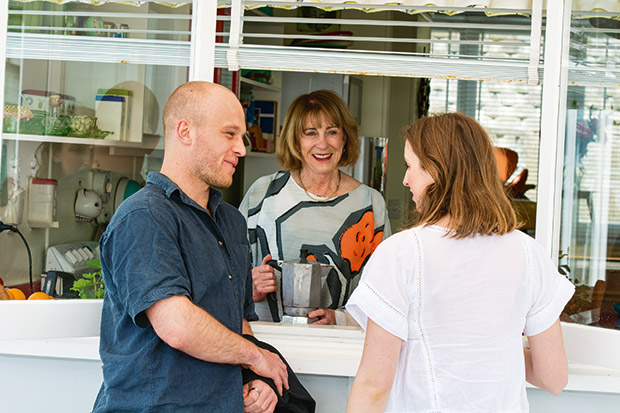 Tom Miller, Chrissie and Grace share a coffee break at the kitchen window. Music, conversation and eating have always been at the heart of life in the Butterfly House.

“My collection is filled with things that could be found in a hoarder’s messy home, yet I believe these unassuming objects are important treasures. It is extraordinary how the most humble egg cup takes on a presence when one knows its origins.

“In an unpretentious way, New Zealanders have loved their Fibrolite baches, DIY cribs and pāua-shell clocks. And the souvenir market created items with the most endearing themes that were uniquely New Zealand. For example, the decorative kiwi (above left), has an elegant-ized neck much longer than it is in reality and is nibbling on a fern frond, which they don’t eat as they are not vegetarian. 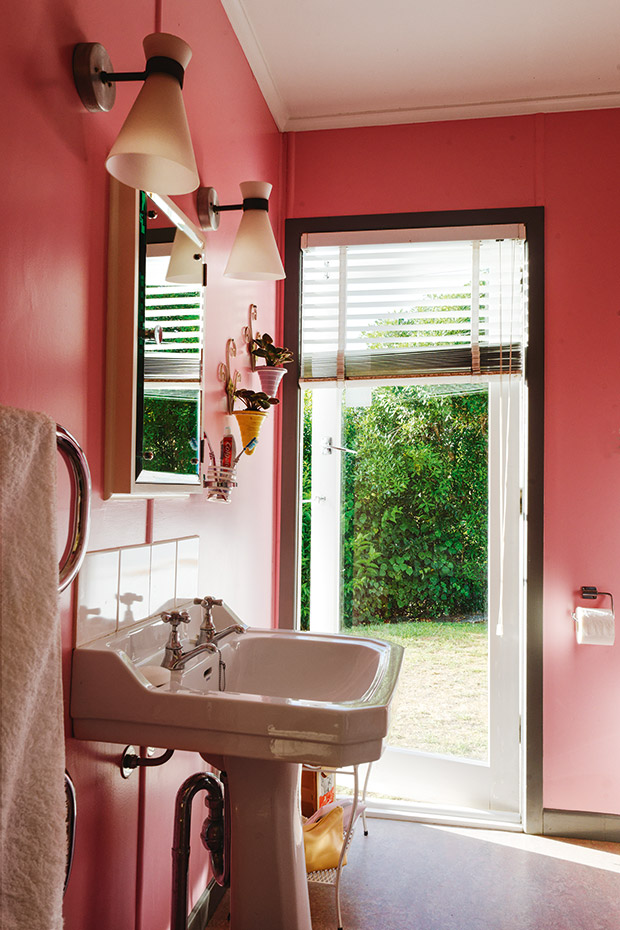 “And, at the same time, objects from this era were exuberantly colourful and generally made from robust materials that lasted well. There is no need
for a coaster under a wine glass on a Formica table like there is on polished mahogany or waxed Georgian oak.

“It is important to me to preserve these items; otherwise they’ll be lost. People think that because they are so cheap, they are not worth saving.”
Chrissie’s 25-year collection is now vast and available to see online catalogued under the Museum of the Everyday. The objects have occasionally threatened to take over and, once, a purge on clutter was attempted. Not much was thrown out, though Chrissie rues the replacement of a Hamilton Beach milkshake machine with a modern capsule coffee-maker.

Items from the MoE collection featured in every issue of NZ Life & Leisure from March/April 2017 through to November/December 2018.

WHAT THE GRANDCHILDREN HAVE TO SAY 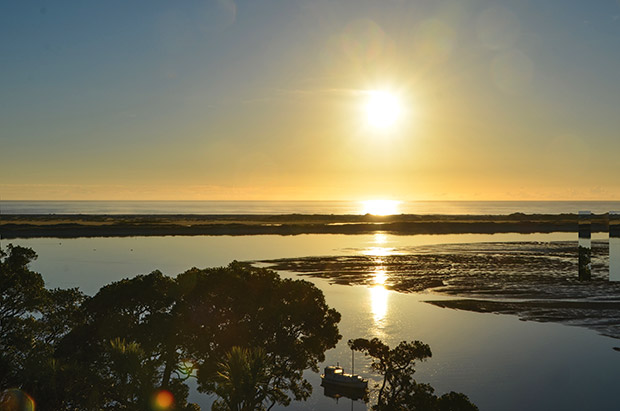 Sun rising over “Middle-earth”, as the big sandbar is known in family folklore, brings the Mangawhai Estuary and all its birds to life.

“The Butterfly House is the sanctuary of my childhood. The whole presence of the butterfly house preserves and expands me equally. It’s a perfect place to relax as it takes me as I am while reminding me of all the happiness I have come from. Everything about it is purely familial, a true part of the family.” – George Hellriegel

“The Butterfly House fills your mind and your heart with colour, leaving it is one of the hardest things to do.” – William Hellriegel 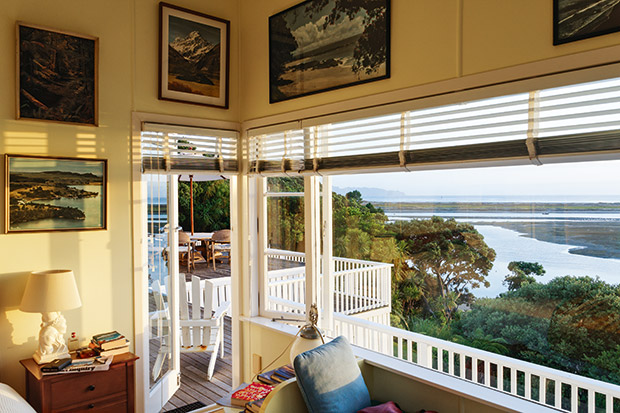 “For me, Mangawhai means breathtaking views, family and friends, backyard cricket, a new book, sunburn and splinters, outrageous kitchen accessories, and champagne. I hope to continue living the 1950s fantasy for many years to come.” – Emma Tattersfield “Each room sparks imagination and joy; the Butterfly House is a place where I can unwind and let my creativity flow.” – Grace Tattersfield