Lessons of the land: How Gemma and Mike Smith are using nature to educate pre-schoolers The Smiths: (From left) Jandal with Mike, Holly with Briar, Gemma with Brand, and Libby with Toby.

A Queenstown couple take on the task of nurturing Aotearoa’s most valuable and important resource.

Charlie the pony has a secret. At Matariki, when stars, made from the gouged eyes of the god Tāwhirimātea tumble across the sky, Charlie becomes a unicorn. Mike and Gemma Smith have a secret, too. In fact, they are Charlie’s secret. Because it is not only stars that tumble over the 90-hectare farm the Smiths lease at Lake Hayes, but children — lots of children.

Twice a week, their gumbooted, pre-school feet hit the farm running, and they get the chance to do things many of today’s kids no longer experience.

They splash through the stream, slither down the mudslide, climb trees, hang out in a tree hut, hurtle skywards on a rope swing, roll down hills and earn a few bumps. And at Matariki, they go on a unicorn hunt. And there, just there… look there!… is what they’re searching for. 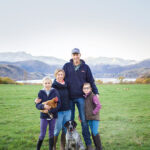 The family with a passing chook and gundog Pippa. 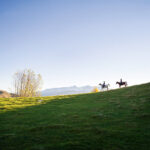 Libby and Briar ride the ridgeline. 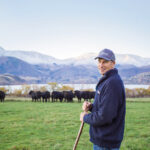 With a gold horn, pink glitter and fairy lights plaited into its mane and forelock. Of course, it’s a unicorn. The kids have no doubt it is the real thing. Behind the horn and under the lights, Charlie snickers to himself.

Later, when co-conspirator Louise Allan (Gemma’s in-house unicorn creator) has divested him of his disguise, he reverts to just plain old Charlie in the paddock. But in his heart, he will always be a unicorn.

Of course, there’s a more serious side to the children’s visits; they get to see life unedited. They will see lambs born; hold a week-old puppy; peer dubiously at dead ferrets. They will collect eggs from chooks, not the supermarket; they will twist their little fingers into a sheep’s fleece and observe dead hedgehogs in traps by the hen run. They will live the seasons in the raw. 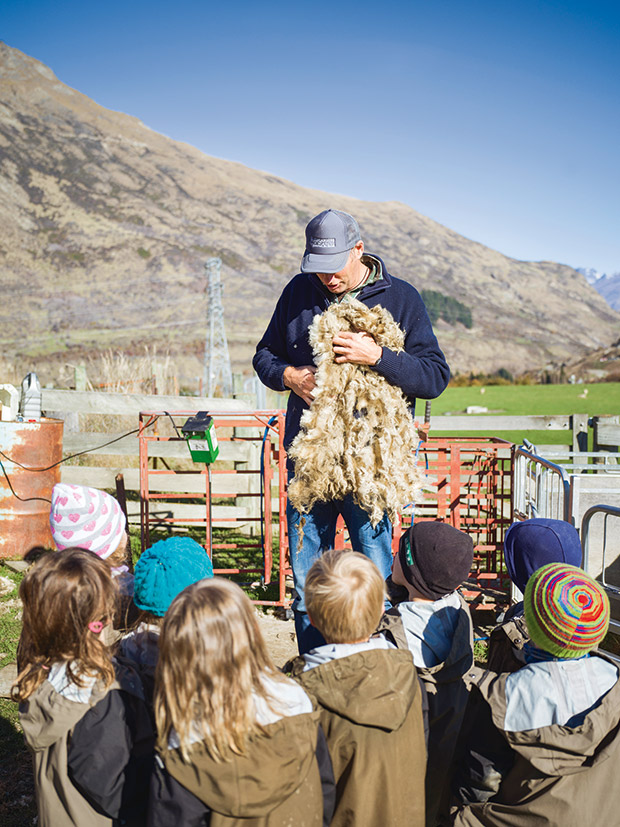 Gemma was the co-owner of a planning consultancy, Brown and Pemberton Planning Group, and worked in the Queenstown office but she could never have planned for this particular change of direction. It was sheer happenstance; the Global Financial Crisis was putting the squeeze on planning, so she was looking for a new opportunity, a chance to put her energy into something different.

From the periphery of her mind, Gemma dredged up a situation that had happened several times — employees who were new mothers who wanted or needed to get back into the workforce but couldn’t because of the waitlist for childcare facilities. 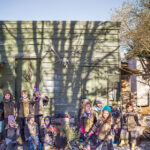 Big grins from the children of Gems Rātā Farm School. 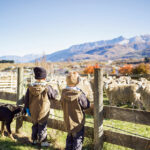 Jess, the working sheepdog, shows two children one of her flocks. Generally, the dogs are kept in their kennels during Farm School, although they are not at all bothered by the children. However, some kids are not sure about dogs and find that a quick pat at the kennel is more than enough.

So, she and Mike — who was currently managing the Remarkables Park deer stud — thought that maybe an early education centre would be a good and worthy project. Even though it was a gap in early childhood services that would easily be filled given that parents were desperate for it, the Smiths wondered what they could nevertheless do to make a difference.

“We thought a lot,” remembers Gemma, “about what we would like our children to experience in pre-school. We were very much in the moment because Libby was two and Briar was just three months old; I suppose, like all firstborns, Libby was going to be our guinea pig for Briar’s future education. Looking at Libby and her reaction to the world at two gave us a lot to ponder.” 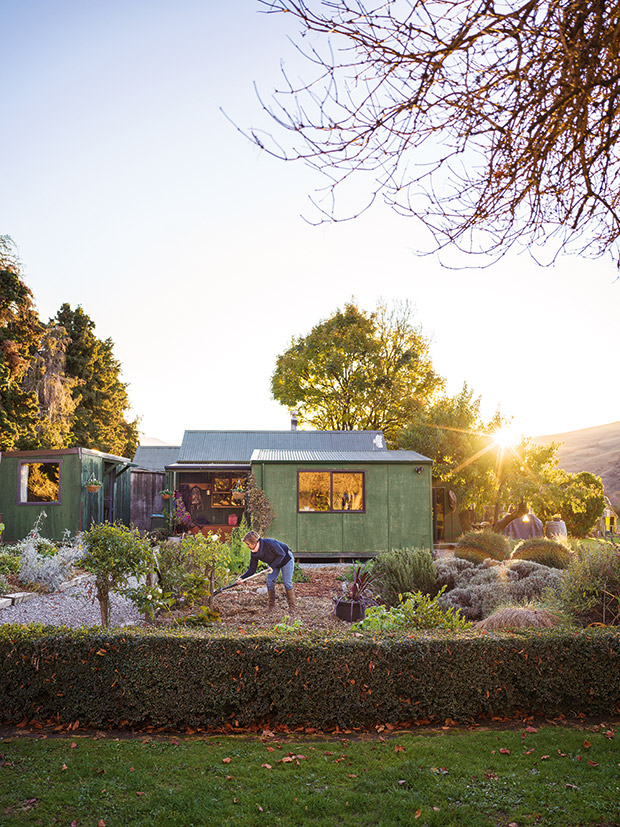 The Smith’s 90-square-metre cottage is a Manapōuri Dam house relocated to the farm in the early 1980s. The family loves the rustic split-level character of their home, especially its “rubber” walls, which somehow manage to accommodate all visitors. The current record is 16 people. Seating at the dining table includes a pew from Mount Somers Church that can accommodate quite a few little bottoms.

On hearing of a new centre opening in Queenstown, Tash Doyle (Queenstown born and bred) contacted Gemma and Mike. Tash, wanting to return to her southern roots and having opened five EC centres in Auckland and Hamilton, had an interest in Reggio Emilia.

It is an Italian play-based concept that recognizes — put simply — that children can teach themselves, using their environment as the third educator (the first two being parents and teachers).

Gemma and Mike were intrigued. Reggio Emilia is more play-based than the perhaps higher-profile Montessori model, which tends to have a greater number of prepared sessions for children to work within. But aspects of it could be adapted to this country’s distinct environment, these uniquely Kiwi children. 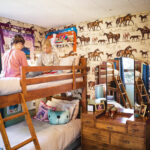 The girls’ love of horses is reflected in the wallpaper of their snug bedroom. 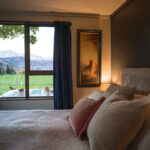 The vintage print of the stag in the master bedroom is by Swiss botanical artist E. Vouga, passed down by Mike’s grandparents. 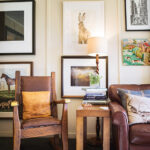 The picture gallery in the living room is a random collection of pieces that has caught Gemma’s eye. In the centre of the wall is Whiskers The Hare by Canterbury artist Kate Calder. 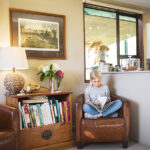 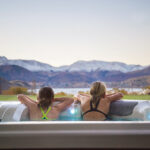 It seemed like a good fit. And, asked Tash, can I be part of it?  Yes, it was a good fit and, yes, Tash could be part of it. So with their foundation employee, Gemma and Mike opened the first Gems Educational Childcare centre.

During Gemma’s transition from town planner to early-education provider, she and Mike moved onto leased land with 200 cattle so Mike could start a herd. His parents had launched a genetic line of kincardine angus cattle, and Mike was also able to round up some of the finest beasts to be the proven basis of his own breeding programme.

Enter Mark White, another Gems employee, who had been reading about the Danish notion of Forest School, a programme for children conducted predominately in a green space now common throughout Scandinavia. 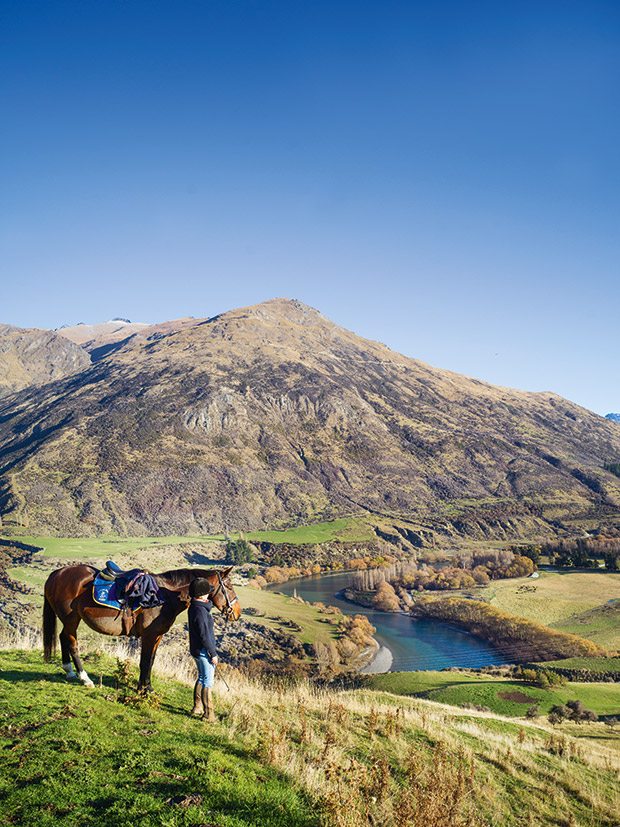 Mike, with Lakes Hayes in the distance, watches over his herd of cattle, while higher in the hills, Gemma and her mare Bandy get the bigger picture overlooking the Kawarau River and the entire farm.

You have a farm, he pointed out. You have the space; let’s try it out. The concept excited them more than a little because although their new business was going well, they still wondered what else, what other experiences, they could offer the children.

“We decided to give it a go,” says Gemma. “It sounded like the perfect fit, and we had nothing to lose and everything to gain. We decided we would give it a year, which gave us time to observe and tweak it to meet our — and our kids’ — expectations.”

With the aid of co-conspirators such as Charlie the pony and Louise the unicorn-maker, and, of course, the Smith’s master co-conspirators — the children themselves — the Forest School-style extension, Farm School, was a hit. There’s the admin, of course, the health and safety requirements, the weather, the appropriate clothing, prickles, splinters and bruises but most of all, there is the sheer glee of children running wild. Both programmes — indoors and outdoors — build resilience and capability and give children the confidence to look after and out for themselves when they enter the formal school systems.

“It sounds a bit of a cliché,” says Gemma, “but one of the things I am most proud of is what we call Team Gems. These are the people working with us, and so much of what we have achieved we can attribute to these committed and loving souls.

Gemma and Mike now have three Gems early-childhood education centres; the original Miro at Lake Hayes Estate, then Kōwhai at Shotover Country and now Rātā at Kawarau Park. Rātā is in a retirement village, an intergenerational initiative appearing in many countries. 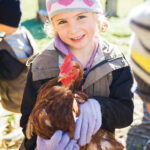 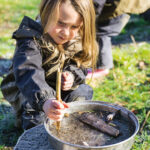 Nature is plentiful within these pre-schools and integrated into everyday life for Gems’ tamariki. For instance, the children grow the food they eat for lunch in the school gardens, and a lot of their “toys” are rocks, sticks, mud, water — natural products. gems.net.nz

“Turnover and burnout are high in this sector, so we are proud and grateful to have such commitment to our company.”

Queenstown has a strong sense of community, not necessarily expected from a resort town with a large, transient community of seasonal workers, says Gemma. A small but close-knit full-time population can make it easier to reach out a hand in support. 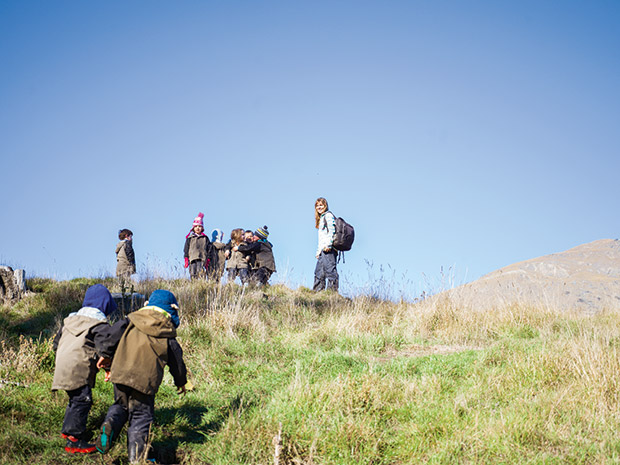 The pandemic impacted many families in the area, which relies on international tourism, especially hard. These stresses often became apparent through the heightened behaviour of some of the children.

Gemma and Mike brought Lance Burdett of WARN (Wellness, Awareness, Resilience & Negotiation) International from Auckland to run a workshop on resilience with Gemma’s team. The couple then facilitated a fundraising community evening (same topic) that night.

Lance has since been back to deliver another free public event, which Gemma and Mike helped coordinate. The feedback has been tremendous, says Gemma. warninternational.com

Inside the Lantern House: Why this globe-trotting couple made Waiheke Island their forever home