How a squashed tomato sowed a growing love affair Jean is 98 years old, and still gardening. Here she shows off her raised beds to Kristina.

Once upon a time might seem an outdated way to start a column, but this love story deserves a beginning that roots it firmly in a bygone era. Back in a time when people pitched in to help their neighbours, and traded heirloom seeds over the fence (or in this case, over the railway track). Once upon a time, two young people fell in love forever.

There was Jimmy, born and bred in Piopio, a conscientious objector during WWII, working to prepare farms for returning soldiers. And there was Jean, originally from Mangaweka, a land girl, working as a housekeeper.

They married in 1947, settling first in Piopio. Then they moved to Te Kuiti where Jimmy built the house that Jean still lives in, 60 years later. This fine couple played a major role in my family’s life, mainly as part of the Te Kuiti Tramping Club. Jean and Jimmy were members for many years – Jean was president for 25 – with my parents, Eric and Nancy Jensen.

Jimmy planted countless native trees with my father, friend Arthur Cowan, and other members of the Native Forest Restoration Trust. My father says Jimmy, who died eight years ago, had an intense hatred of gorse. “He would spot a plant and charge in for the attack like a terrier.”

Jean and Jimmy’s love of native bush took them on countless tramps and tree planting expeditions all over New Zealand. In 2008, the hard-working, generous couple were awarded a joint Queen’s Service Medal for their services to conservation.

During their early years together, Jimmy was building houses out near the Pureora Forest. Jean says it was there that he met a Maori chap working on a railway gang nearby.

“This guy gave Jimmy a squashed tomato that he had got from an Italian who told him that it was the best tomato ever, so we saved the seeds and began growing them.

“We grew 12 plants that first time, and ever since then, we’ve had pretty much a 100% strike rate for germination.” 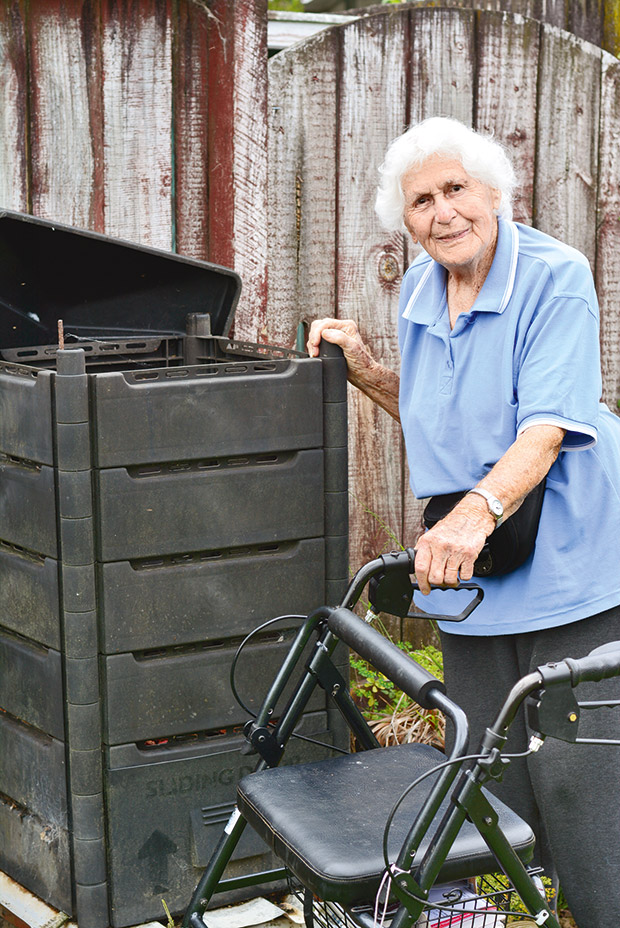 Jean and her thriving worm farm.

Along with ‘Jean & Jimmy’s Tomatoes’ as they’re fondly known, Jean grows Port Albert cucumbers seeds gifted by an old fishing mate. Red Dakotas are her favourite potatoes, and Cherry Pie is her rhubarb variety of choice.

She hates spraying anything. “Unnatural,” she says. Jean is now 98, and she still loves to garden.

“We had huge gardens when I was growing up, growing food right up to the house. We milked 30 cows by hand, and I remember pulling wool off the fences for Mother to spin. My first job was weeding carrots. I was five years old and I got sixpence a row.”

Her eyes still sparkle when she starts talking about baking summer quiches with her tomatoes. She made loads of sauce with them – “pretty much the Edmonds cookbook (recipe), with a few tweaks here and there”. The best tomatoes ever, believed to be of Italian origin.

Soup, salads, and dozens of jars were bottled to use during the winter months. She and Jimmy gave away plants and many bags and boxes of their delicious tomatoes to friends and neighbours over the years.

Today, she’s made a few concessions to her knees. “Buggered from planting trees,” says Jean. “The family put in raised beds for me years ago. ‘That’s all you need now, Gran-nan,’ they told me, and they were right.”

1. To prepare the ground, put a small handful of Epsom salts in each hole formagnesium, a couple of tbsp of milk powder for calcium, generous helpings of well-rotted compost, plus sheep or goat manure, or blood and bone.

3. Use a spray of water, baking soda, and dishwashing liquid to discourage whiteflies.

4. When harvesting tomato for seeds, the fruit needs to be almost rotten.