Hula girls, grass skirts and a pineapple ice bucket… the only thing missing from this Hawaiian homage is a coconut palm swaying in the warm Waiheke breeze.

The caravan suffered a midlife crisis. She was entitled to, after years of being dragged down dusty, bumpy, windy, salty, endless roads to blustery surf beaches. Her envy of gleaming, stationary caravans and campers with padded deck-chairs and wine fridges turned her navy-blue paint a strange shade of green.

She had seen Aotearoa from the lighthouse to the Bluff but her rolling wheels were weary and ready to gather some moss. Her surf-mad owner knew the end of their journey was near. Together they returned to Auckland’s Mairangi Bay with a sign resting in the back window – two words in big black letters: For Sale. She sat, roadside, until the day Jodi Marley strolled by. The shell curtain was inherited from the previous owner but the personal touches such as the hand-painted guitar are all Donella’s work. Donella’s daughter is one of the many who enjoy the company of Dorrie.

As Jodi walked with friends along the road, her mind wandered. What was next? Husband Wilf showed no signs of retiring and their cottage in Oneroa on Waiheke Island was complete (for now). They often retreated there for weekends and stolen days, running away from errands and chores to their hideaway by the sea. It had none of the commitments of home, just a dog-eared book and the promise of a glass of Larose at Stoneyridge, the best on the island.

Perhaps that is why the little caravan stopped Jodi in her tracks. She could almost feel her legs aching from hours spent curled in the too-short seat. She tasted the wine that would just fit in the little fridge and heard the Waiheke waves, as if the caravan were a large shell to hold to her ear. She bought it that afternoon. 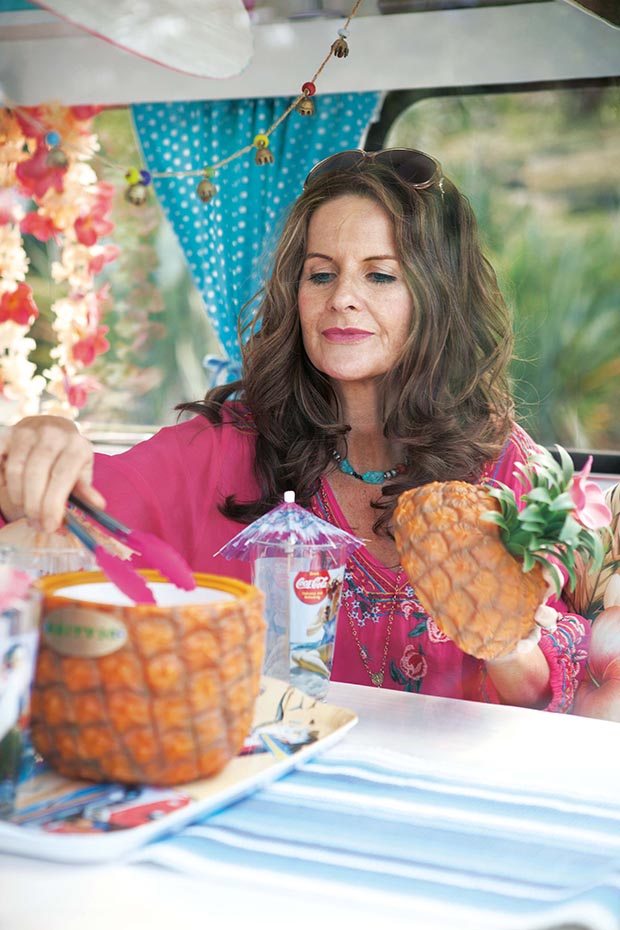 The pineapple ice bucket is a favourite with both Jodi and Donella, due not only to its kitsch charm but to the vital role it plays in keeping cocktails cool during summer.

So began a new journey for the little caravan. She was towed from her (quite comfortable, thank you) spot in Mairangi Bay to Greenhithe and down yet another windy driveway. There she was parked, a blank canvas placed in trustworthy hands.

She was to be a family project and who better to take the reins (or wheel) than an accomplished artist who just happened to be Jodi’s daughter-in-law, Donella. Donella was handed the keys and entrusted with a three-metre art project. Donella was known for taking on any kind of commission, once folding more than 1000 paper flowers for a backdrop, but this was the first caravan to cross her path. 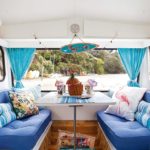 The grass skirts came from one of several trips to Ike’s Emporium and were neatly hand trimmed to the perfect length. 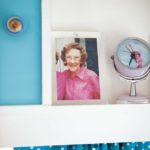 A framed portrait of Dorrie by the cupboards. 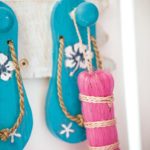 When it comes to details, don’t ask Jodi to play favourites. “I just love the whole feel of the place. It really came into its own.” 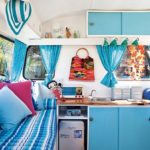 Inspiration came from her daughter, now 18, who, thanks to a slip of the tongue years before had christened Waiheke “Ha-Waiheke”; fitting for Auckland’s island getaway with fewer palm trees but more wineries than the original.

One thousand hours ticked past as faded paint was glossed over, curtains hung, leaks found and repaired by Donella’s husband Todd, his 1.8-metre frame hunched to fit through the shoulder-bruising door, and endless restored 1950s’ knick-knacks arranged on newly painted shelves. Trade Me parcels criss-crossed the country, creating a spider’s web of connections, courier tickets, forgotten treasures and dusty inheritances. Second-hand stores were scoured for ’50s’ relics and Waiheke markets lightened of mirrors and a retro radio.

Donella was often found on hands and tired knees, painting doors turquoise to match Jodi’s favourite kitchen tiles and hanging a Hawaiian grass skirt to hide the ageing ankles of the old caravan. As a blonde Vargas girl in a retro swimsuit came to life on the back of the door, so did the caravan. Her windows gleamed like a sparkle in the eye. 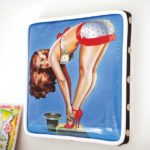 Wilf found the picture of the bending woman in Arrowtown and snapped it up as his personal contribution to the cause. 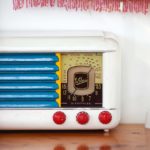 There is a mix of old and new, restored and replicated. 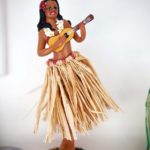 While Trade Me provided hours of entertainment and lucky finds (such as the Hawaiian figurine), Donella brought the rest to life. 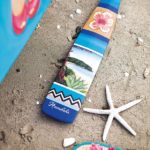 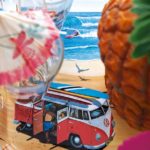 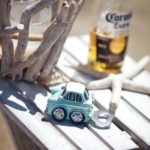 One day in late 2012 the paintbrushes were put down for the final time. The cushions with saucy pin-up girls were plumped and little paper umbrellas sat cheerily lopsided, awaiting the pop of a cork. There was one last finishing touch: a small photograph placed next to the blue-doored cupboard, a smiling woman in a pink shirt, always there to watch over her namesake. Dorrie.

Now Dorrie lives next to the cottage hideaway overlooking Oneroa Beach. She’s happy playing hostess to Jodi and her friends as they sit around the table and fill the tiny space with laughter and the aroma of fresh fish and chips from the shop down the road. Jodi’s vintage hollow-stemmed champagne glasses often overflow with bubbles as life’s triumphs are celebrated and problems solved. In the afternoons Jodi and Wilf sit together, looking out the back window towards the sea and listening to the restored La Gloria radio. 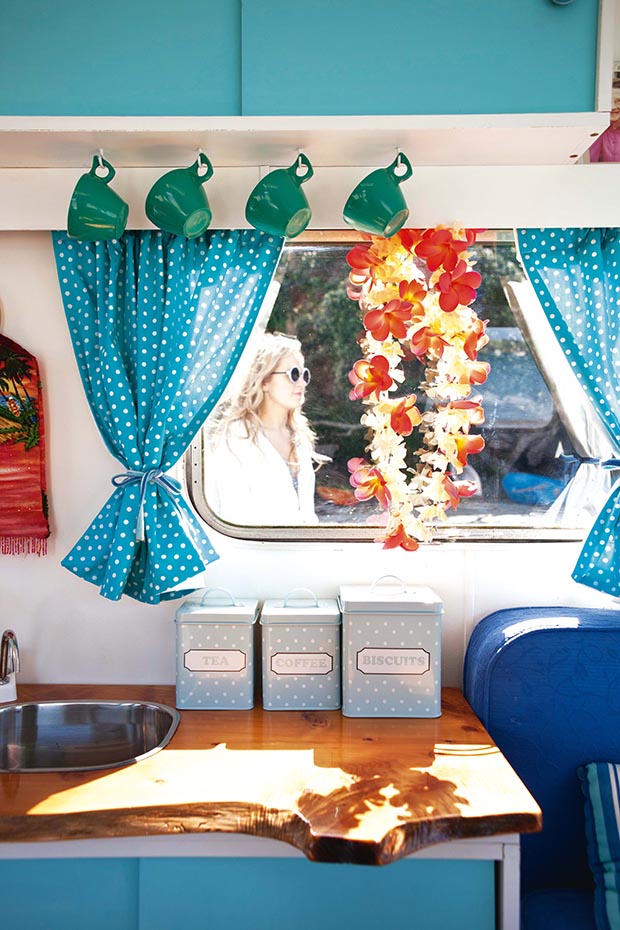 Being a novice didn’t stop Donella from sourcing the perfect fabrics and sewing the curtains to the right size. Some helpful advice from a friend: just sew the lining and curtain together then turn inside out, just like you were sewing cushions.

As the quiet winter months give way to sunny days and noisy beaches, the cottage fills with family and friends, often numbering more than 20. The teenagers take refuge from adult eyes, using Dorrie as a temporary bedroom and hangout. As they sprawl on her narrow beds, she keeps any whispered secrets within her four walls.

Christmas Eve is the busiest time of the year as visitors come and go, presents are unwrapped (in accordance with Jodi’s European traditions) and plates are piled high. Dorrie sits in the driveway, a labour of love living out her golden years in style. 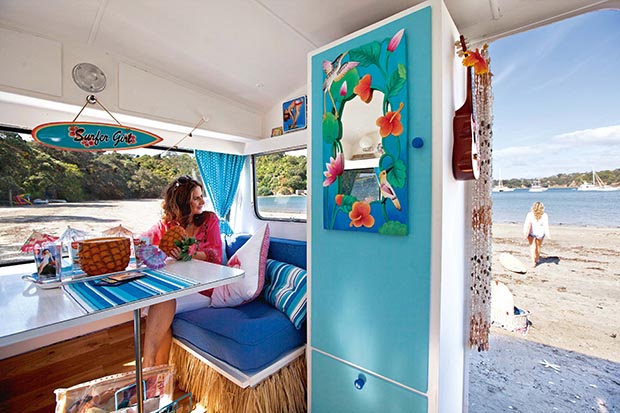 The brightly coloured mirror has had a shorter journey than most of the knick knacks, coming from a Waiheke market. It received the full treatment with a rainbow-tinted transformation courtesy of Donella’s paintbrush.

ALL ABOUT DORRIE
* She is a Crusader caravan from the late 1970s and is approximately three metres long.
* “She is ready to be picked up and moved, although we don’t plan to take her too far,” says Jodi. “There is bedding tucked away in the cupboards – all colour coordinated – just in case we change our minds.” * “The long board on top of the caravan came from a young man through Trade Me. When Wilf and I showed up on his doorstep, the look on his face was hilarious. I don’t think I was the surfer girl he was expecting,” says Jodi.
* The caravan is named after Jodi’s mum, Dorrie. She loved hearing tales of her namesake, the family always kept her up to date with progress through photographs and she made Jodi promise to swing the caravan past her home on its maiden voyage to Waiheke. But Dorrie didn’t get to see the caravan in all her glory; she died in November 2012 at the age of 97. Jodi has no doubt that she would have loved it.