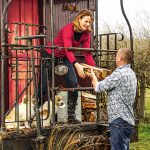 Originally an occupational therapist Mandy has never trained in design, but has a knack for great interior decorating. “We wanted to do justice to the trains,” she says, “but we had to do it on a shoestring so it meant thinking outside the square.” 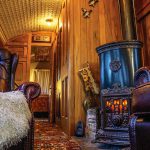 Still off the grid, Mandy and Damon rely on the Godin woodstove for heating, driving all the way to Nelson to collect it. “My favourite purchase, the woodstove is the difference between making it in winter or not,” Mandy says, the rich Axminster carpet (another Trade Me deal) adding to that winter comfort. 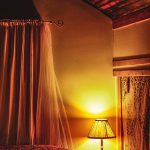 It’s hard to believe that both carriages were total wrecks only five years ago. Most of the surfaces have been sanded, varnished or painted, or replaced entirely with salvaged rimu, but Mandy was insistent some corners were left as memorabilia. 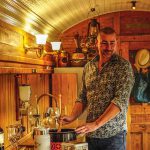 Daman is a cook, sometimes moonlighting as a chef. 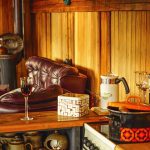 Gas for cooking, and solar panels to power the old railway relic lights and stereo, life at the trains is back-to-basics with the emphasis on hard work, good music and great food. 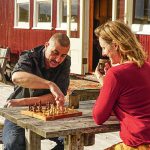 Both agree that the deck made all the difference to being able to enjoy and relax, rather than just work. 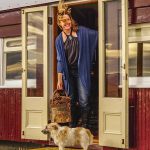 From tuis and bellbirds at Paradise, they admit they enjoy the sound of the magpies at dawn in the Maniototo, and the space and ever-changing light across to the Hawkdun Range.

A South Island couple takes on two run-down old rail carriages and, in doing so, embarks on a long, exhausting – and ultimately very rewarding – journey.

Mandy and Daman Groshinski wanted a bush block on the West Coast, ideally near Haast and definitely within reach of the sea. The managers of Paradise Trust, a picturesque retreat at the head of Queenstown’s Lake Wakatipu, they had begun to feel the mountains starting to close them in. The dream was for a getaway where they could see all the way to the horizon. 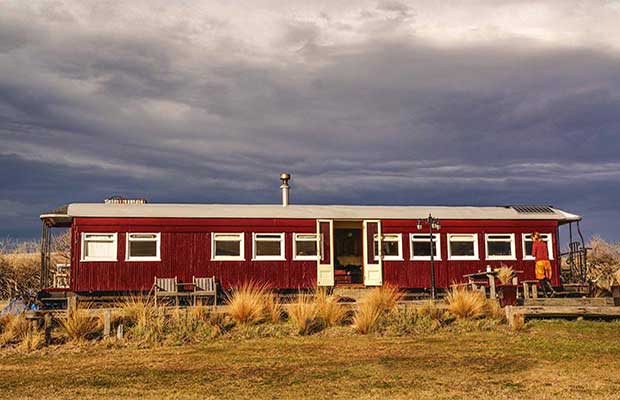 Mandy spent luckless months trawling websites. On a winter’s day, in near desperation, she clicked on Trade Me’s Other Things You Might Like. Up came “the trains”. Nowhere near the sea. About as far from a coastline one can get in the South Island. Looking a little worse for wear.

“The trains found us,” Mandy says, “not the other way round.”Later that week, in August’s minus-16-degrees Celsius, with a solid grey layer of fog, they drove through to the beautifully bleak Maniototo. What they found in the tiny settlement of Waipiata (10 minutes from Ranfurly and a stone’s throw from the Rail Trail) would break most hearts. Two forlorn carriages, roofs in tatters, windows broken with water seeping through everywhere. A home to birds and mice. And how about that “we must be able to see all the way to the horizon” view?

Because of thick fog they could barely see from one end of a carriage to the other, let alone if their site had magnificent vistas. But they decided to buy them anyway. Two weeks later, a builder friend called at the property to assess “the damage” and suggested they must have bought it purely for the views. Daman and Mandy were stunned when they revisited their new property, crowbars and hammers in hand.

There was a view north from both carriages to the flat-topped and folded Hawkdun Range and beyond – not a blue-sea horizon, for sure, but a big sea-blue sky of the Maniototo.“It was a cracker”, says Daman. They had found another Paradise. 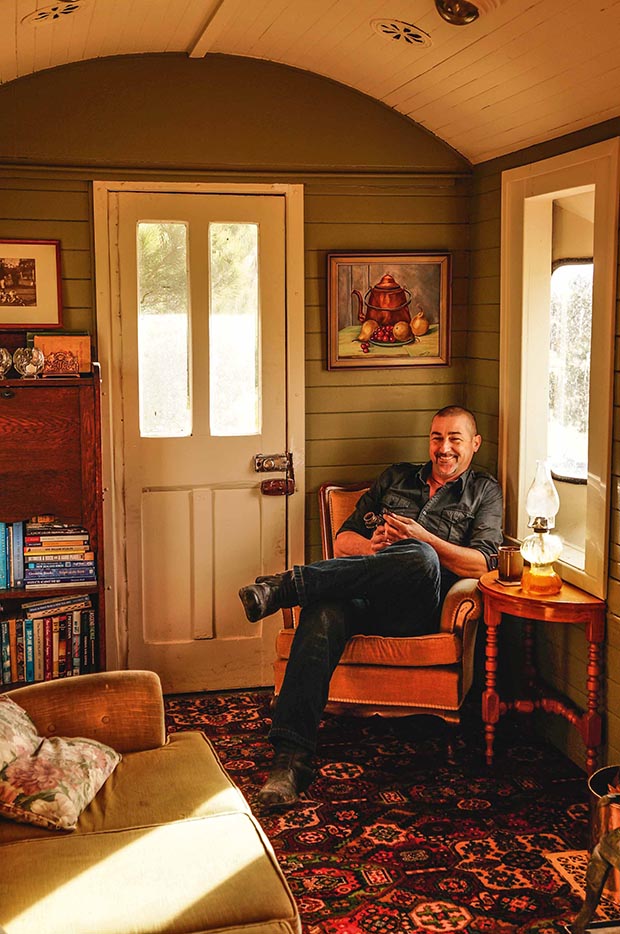 That was the outdoors side of things. The indoor aspect, however, was quite another. “From over the fence we overheard the neighbour say “those carriages aren’t even worth a stick of dynamite”. I didn’t know whether to laugh or cry,” says Mandy. And it wasn’t only the neighbours who were sceptical. “Most of our friends thought we were mad, and I admit I did question it myself at times.”

But hard work is hard-wired into this couple; restoration is the common theme of their lives together. The challenge – of bringing these once-loved railway wagons back to life – was the very reason they signed the purchase agreement in the first place. In a previous life, they’d lived in Northland and restored four sailing boats in rapid succession. The yachts were all near-derelict to begin with but eventually capable of inshore voyages to the Hauraki Gulf and beyond. Then Daman, whose career had included being up close with superyachts but much too personal with epoxy resin, felt in need of fresh air for his lungs and brain. So they moved to other end of the country. 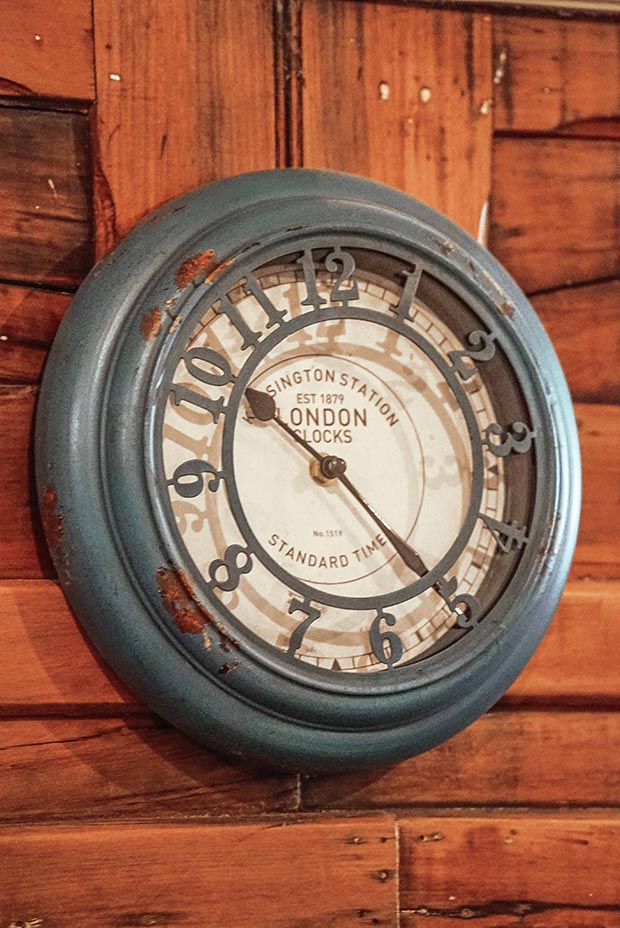 ‘Most of our friends thought we were mad, and I admit I did question it myself at times.’

In the Southland town of Tuatapere they restored the Presbyterian Manse into a B&B – in-between managing and guiding on the Hump Ridge Track in Fiordland and in Stewart Island. From there it was to the Hollyford Valley in Fiordland, where they took on the roles of jetboat driver and lodge hosts and Mandy finished decorating a new lodge at Martins Bay.

When, in 2010, they were offered the management roles at Paradise Trust in Glenorchy their restoration skills were spurred back into action. Paradise has many old buildings used as accommodation and many of these needed skilled attention. But nothing compared with the hard graft to come of “the train wrecks of Waipiata”.

The settlement of Waipiata doesn’t have many claims to fame: one pub and an old rabbit factory where, in the late 1880s and early 1900s, rabbits were skinned and tinned. Oh, and the railway line – which once traversed the town. Today, in the summer months, the disused and tracks-less old rail line attracts flocks of Lycra-clad cyclists who settle on the pub’s veranda, resting up between walking and/or cycling the popular Otago Rail Trail. The rest of the year it is very, very quiet. 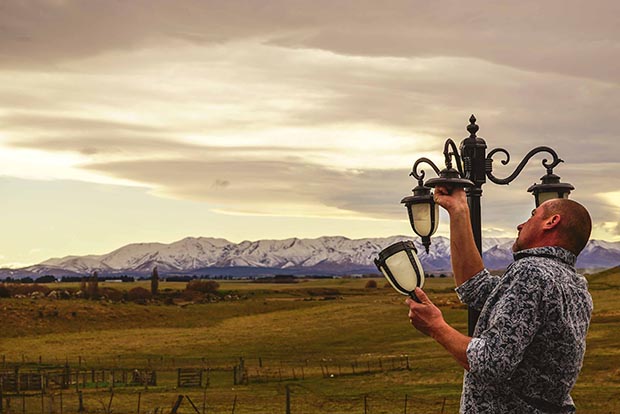 The train carriages, now sited in an L-shape beside Lizard Hill, came from the Ranfurly Rail Yards and were dragged across the main road in the early 1980s, tearing up the seal. The previous owner fled town before the invoice for the road damages was paid. The carriages sat unloved for nearly 30 years, becoming increasingly sad and weathered until the Groshinski crowbars arrived, followed by hammers, jacks, sanders, Gorilla Foam, window putty, paintbrushes, and a hell of a lot of goodwill and help from mates. Mandy recalls those first few visits with horror.

“We concentrated on the main carriage and on somewhere to sleep. Mainly it was the rear of the carriage, originally the old kitchen with the most disgusting purple and yellow sink, screeds of bird shit, dead birds everywhere and mold.”

Rotting timber was wrenched from the carriages, the resultant bonfire lighting up the Waipiata night sky. Next was replacing the roof, builder friend Mike Kingan coming up with the first of many great finds – sheets of tin, left over from a Mitre 10 Mega roof.

“Look closely and you can still see the distinctive orange paint,” says Daman. 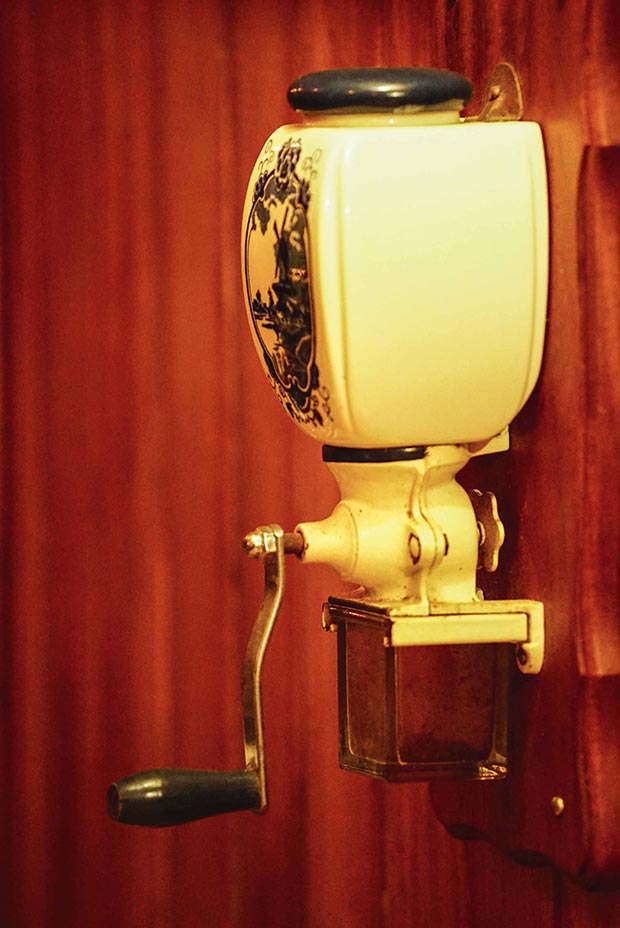 The story is punctuated by stages of hard yakka and by the great treasures found during the journey. “TradeMe was one avenue,” says Mandy, treasure-hunter extraordinaire. But the best were the second-hand shops she trawled on her travels through Otago and Southland.

She didn’t want to go overboard with railway paraphernalia lest it started to look cheesy. Even so, there are hooks, luggage racks, brass dome lights and New Zealand Rail knick-knacks. Both agree the best find of all was the French Godin wood stove, nestled into the corner.

“You can shove in any sized piece of wood and it burns all night,” says Mandy. “It made those sub-zero winters absolutely do-able and cooks Daman’s rabbit stew to perfection.”

The couple has subsequently divided their time between Paradise and Waipiata, for the most part having to play tag as one stays back to oversee Paradise, the other working on the trains. “We were the masters of lists,” says Mandy. “Daman would do the major reconstruction work, and I would arrive to sand, clean and paint. I hate to think how many tubes of sealant I went through.” 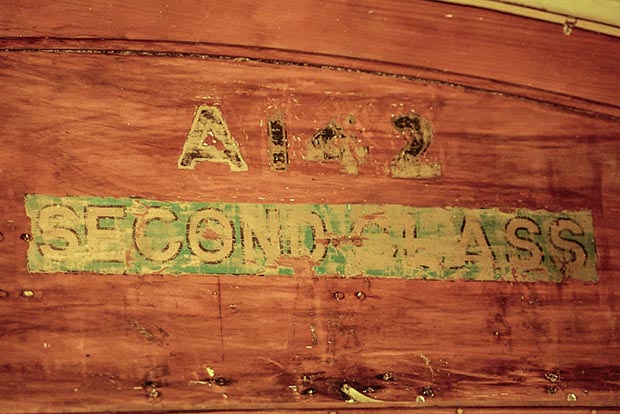 One wonders when they ever allow themselves the luxury of relaxing. “Building the deck changed everything,” says Daman. “We had somewhere to sit with mates, to drink home-brewed cider and watch the sunset.” The restoration work, they say, is intrinsic to the love of the place, fulfilling a vision, tinkering, extending the life of wagons that once wended their way through nearby hills. Mandy admits, however, that there are many moments of simply enjoying the surrounds; finding the local swimming hole, taking the motorbike to nearby Naseby for a decent coffee, walking with jack russells Kahu and Jazz towards the Rock and Pillar Range, or simply sitting and watching the theatre of light, at dawn and dusk, on those faraway hills of the Maniototo.

Marinate 4 hare back steaks for a minimum of 24 hours in olive oil, chopped wild thyme, crushed garlic and a generous grind of Himalayan rock salt. Sear off in a medium-to-hot cast-iron pan for approximately 4 minutes and then rest for another 4 minutes or so before serving.