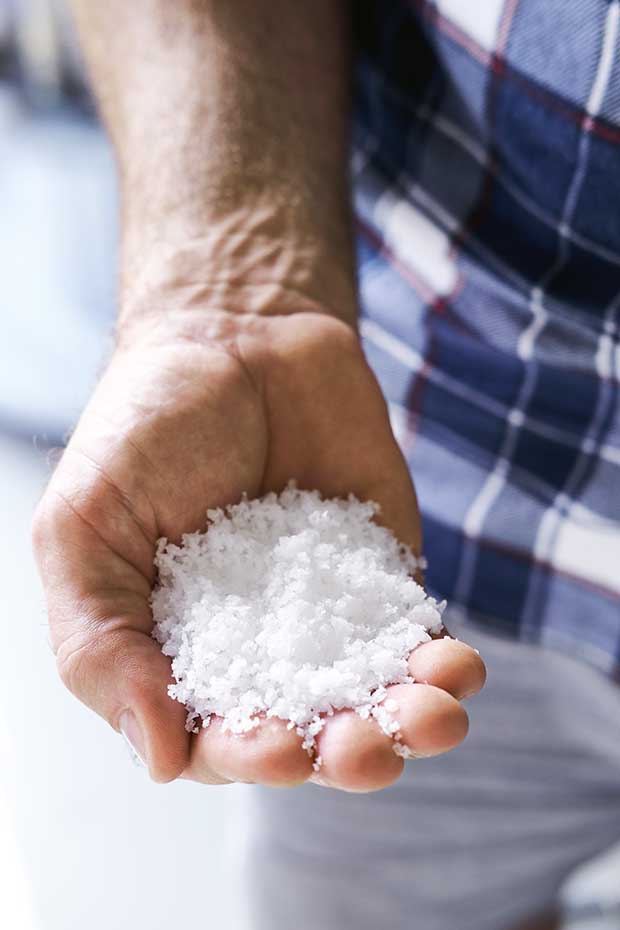 Over the past few years, beachgoers visiting the Maraetai-Clevedon coast south of Auckland might have chanced upon Greg Beattie collecting seawater – first by the bucketful, then the tank load.

“I got quite a few reactions,” says Greg of those early days. “A guy came up to me and said, ‘I bet you’ve got a great big fish tank at home, haven’t you?’ Another said, ‘You can get water out of the tap, you know.’”

The 38-year-old was in fact experimenting with making his own sea salt which, after some tenacious trial and error, he has now turned into a business, Hauraki Salt, named for the gulf that borders our biggest city.

The idea came to him during a visit to a farmers’ market. “I was watching a guy doing cooking demonstrations using local produce,” Greg recalls. “He presented it with great gusto as the most local, fresh plate of food you could ever find. Then he reached under his bench and pulled out a packet of sea salt from England and sprinkled it all over the top.

“I was probably the only one who thought, ‘That’s not local.’ Suddenly the idea was, ‘Why isn’t anyone making a local sea salt?’ It seems so obvious, but for some reason, in New Zealand, sea salt was left out of the artisan movement.”

A landscape gardener by trade, Greg had been searching for a business idea for some time. When he was just 17, some gardening clients advised him to find a product-based business, so he wouldn’t forever be “trading hours for dollars”.

More stories you might like:
The butcher, the baker, the kaffeeklatsch maker: the Vinbrux family take Oamaru

The idea stayed with him for the next 15 years, but it wasn’t until a period of ill health, during which he was holed up at home alone for weeks, that he decided to do something about it. 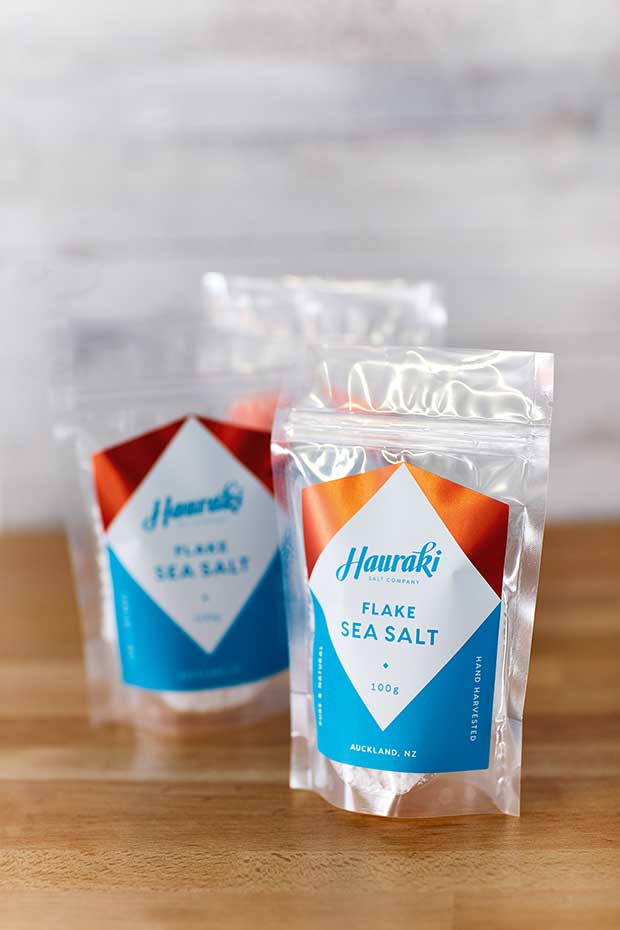 “I was self-employed, so after the first couple of weeks the money started running out,” Greg says. “I realized I was vulnerable to this happening again and I remembered that conversation 15 years before.

I realized I had to have a self-sustaining business that could potentially work without me, so what I really needed was a consumable product.

“I considered just about everything from growing plants to candle-making to soap-making to greeting cards,” he says. “I had almost nothing for start-up costs, which was a bit restricting.”

The idea was put to the back of his mind until a year or so later, and that fateful trip to the market. He began experimenting – grabbing a bucketful of water from the beach on his way home from the market and Googling, ‘How do you make sea salt’. 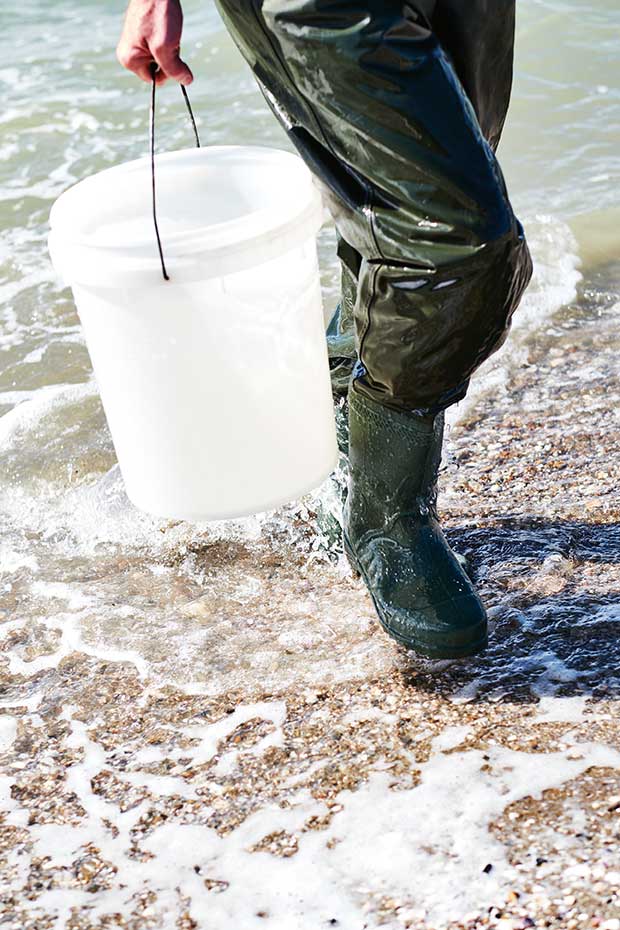 The first search result suggested boiling seawater until it evaporates. “I didn’t realize how long it would take but late that night I was eventually left with a white, sludgy, grainy-looking salt.

It had sand and twigs in it, but it tasted like salt. From that point on  I thought, ‘Aha, this is my product; this is the one that I’m going to see through.’”

See it through he did, although it was far from easy. “There are so few salt makers around the world, and there’s no information – everyone makes salt in a slightly different way.” 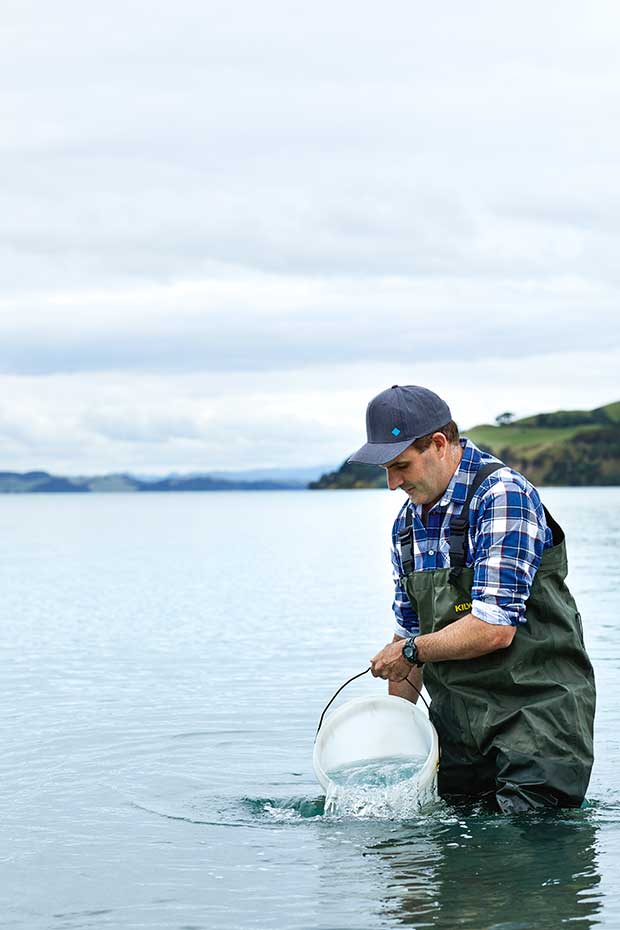 He began by simply boiling seawater over gas. “Every night after work I’d put a pot of salt water on to boil. I kept getting bigger and bigger pots. Eventually I got up to a 100-litre pot, but the problem was it would take 10 hours to reduce by 50 per cent.”

The process was using a lot of LPG, which was expensive. “It dawned on me that the reason there are no artisan salt makers in New Zealand is because it’s just not economically viable.”

Greg was close to throwing in the towel when his twin brother Jono, a chef who runs Texture Catering, tried some.

“He said, ‘Wow. My customers would love this – what a great story, a local salt made by my brother.’ If it wasn’t for that moment, I probably would’ve given up.” 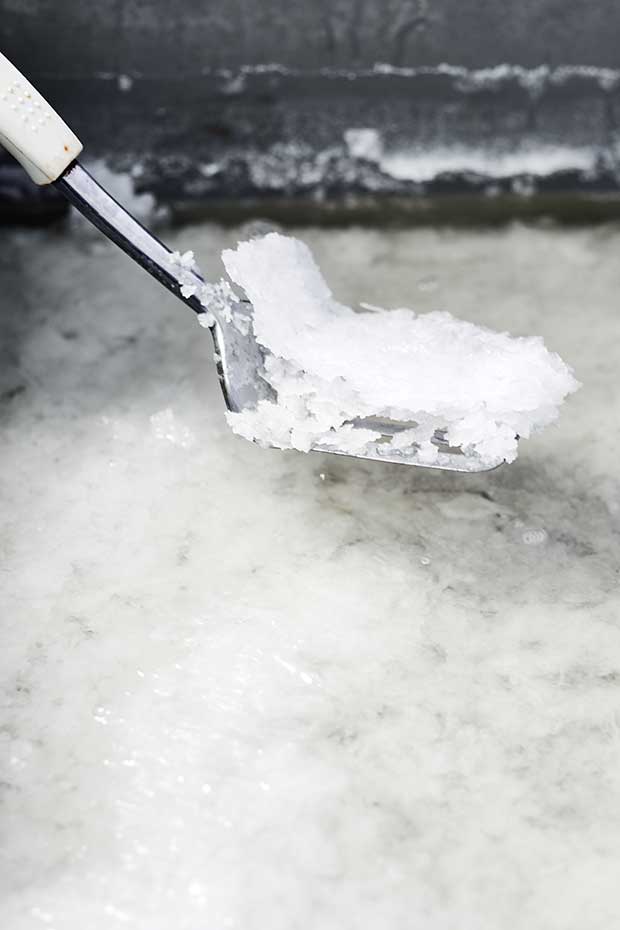 Hand-harvesting sea-salt flakes from the pan.

Greg knew the key to making his salt a viable business was to speed up the rate of evaporation. He found the solution via the industrial methods used to make road salt in the US, plus YouTube clips of high-school students evaporating water under vacuum pressure.

After a series of rejections from people who “thought I was nuts”, Greg found a pump specialist, an electrician and an engineer willing to help him, and imported a pump from Italy. “It cost a fortune and there were no guarantees it was going to work, so it was a huge risk.”

His first attempt to use it resulted in water gushing down the driveway and some very concerned looks from his neighbours in suburban Highland Park, east Auckland. But, after another two years of experimentation, calculations and obsessive record-keeping, Greg ended up with a custom-built vacuum chamber – an impressive effort for a gardener who says he was “very average” at science and maths.

He has worked out how to tweak the salt to change its flavour, removing the calcium and some of the magnesium to make it cleaner on the palate, with no bitter aftertaste.

“Being able to remove the magnesium was a revelation,” he says. “I think it’s made this salt on  a par with the best salts in the world.”

Since launching his product, Greg has collaborated with fellow Auckland artisan producer Line Hart of Line’s Knækbrød on a rosemary and sea salt crackerbread. “It’s been a fantastic success – it’s her most popular variety,” he says. 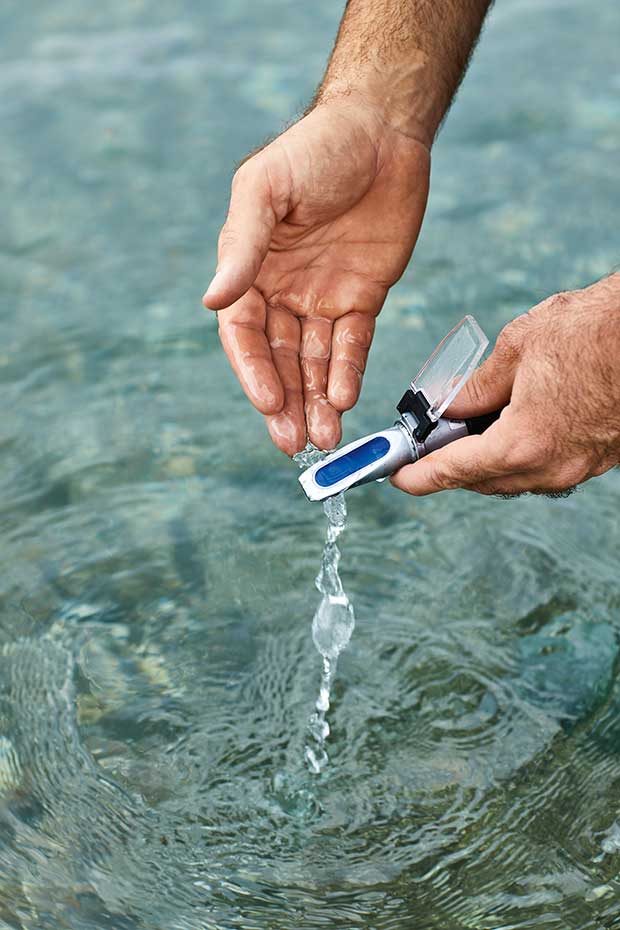 A sample of sea water is collected using a refractometer, which measures salinity levels.

The crackerbread won gold in the Outstanding NZ Food Producer Awards this year, while Hauraki Salt was awarded silver. Greg has also worked with Devonport Chocolates, supplying salt for their caramel chocolates, and would love to engage in further collaborations.

He’s often asked if he’s allowed to take water from the sea, but says the council has okayed it, provided he doesn’t take enough to affect the tides. “If you think about it, I’m doing my part for rising sea levels.”

With its retro-inspired packaging, Hauraki Salt is now on the shelves of retailers, including Auckland’s Farro Fresh. 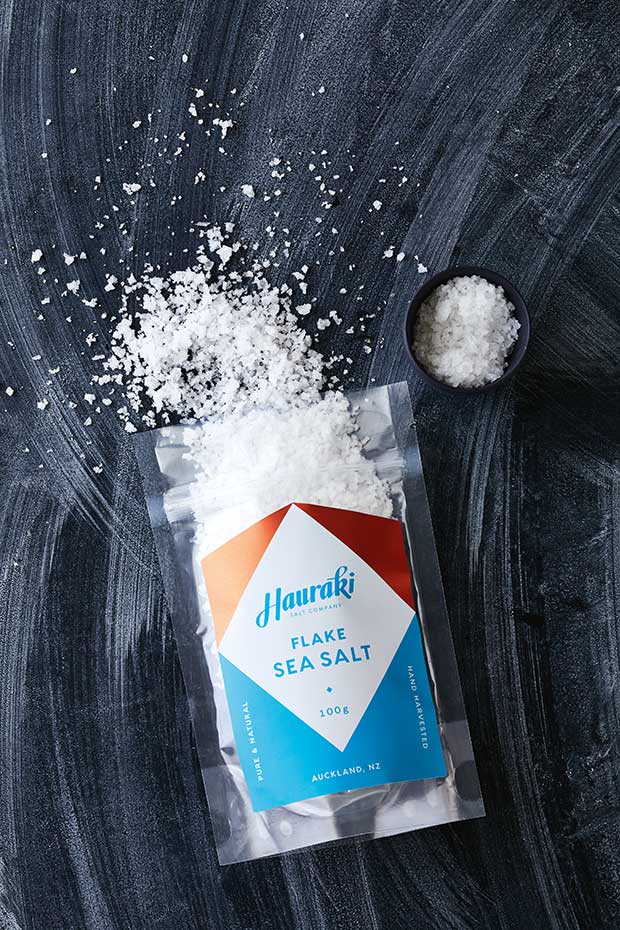 It’s also on the tables at the Hallertau brewery restaurant in Riverhead, west of Auckland, at the New Zealand Embassy in Washington DC and at Kiwi chef Matt Lambert’s Michelin-starred New York eatery The Musket Room.

Greg is still working full time at his gardening business but hopes to dedicate himself fully to Hauraki Salt one day.

“There’s a lot more I can do – I’ve only scratched the surface,” he says. “I want Hauraki Salt to become a household name.”