Kristina reluctantly shares one of her best-ever chutneys.

It’s not often I have a recipe that I want to keep all to myself. This is one of the best chutneys to come out of my kitchen… if you like feijoas.

I used to be a feijoa-denier. Why would anyone want to eat something that smelled like baby vomit? Something that a wwoofer told me was used as animal fodder in its Brazilian homeland.

I hated the smell. It took a persistent member of the Wilderland community on the Coromandel Peninsula to convince me to finally taste one.

Wilderland had a bumper harvest that year and I got to eat a lot of feijoas. I spent hours scooping them out, working my way through buckets of fruit, helping to turn them into jam, and drying them in the converted refrigerator-dehydrator. Maea shows the varying size of the feijoa harvest.

What I discovered was that the flavour got better and better as the season progressed.

I became hooked, easily eating half a bucket for breakfast. I also found out the hard way that you can eat too many. My mouth reacted to too much acid, then the rest of me decided to have a clean out. It didn’t put me off.

As you can see from the photo of my friend Maea below, not all feijoa are created equal. I spend March and April every year going after the big ones. The biggest ones come from a property at the mouth of the Kenepuru Sounds. These particular trees must have a direct line into some magical substance that promotes their giant size.

I first heard about a skin-on feijoa chutney from a friend who lives in Penzance (also in the Marlborough Sounds). She promised me the recipe but it never arrived. Now I have it, I wonder if she too wanted to hide it away.

The magic of this chutney is in the soaking of the ingredients, including the feijoa skins.

The beauty of this recipe is how easy it is. Most of the hard work is done during the soaking phase, the flavours seeping in overnight to create the beautiful flavour, wickedly satisfying texture and aroma. This chutney makes me deliriously happy, knowing that I can open a jar later in the year and happily get a taste of the feijoa season.

This is a two-step, skin-on chutney with bite. I recommend making lots because it gets eaten up very quickly.

The night before you make the chutney, top and tail the feijoas, cut them in half, then into quarters, then into 7-8 slices.

Place in a large casserole with a lid (or a roasting dish covered with tinfoil) to keep the moisture in. Add the onion, lemon zest, and juice.

Chop the chillies finely (de-seed them if you wish) and add them, followed by the rest of the ingredients. Stir, cover, then let it sit overnight.

The next morning, place the casserole or dish in a pre-heated oven (180°C) and cook for 2-3 hours with the lid on. Stir every half an hour. It will thicken and turn a dark-brown caramel colour. If the chutney is not thick after two hours, it needs a further hour.

Pour into sterilised jars, and seal with sterilised lid. Keep it hidden in a cool, dark place for a couple of weeks to let the flavours really meld into each other. If you’ve sterilised your jars and done everything right, this chutney should keep for at least 12 months – I’m using jars that were made four years ago, and the chutney tastes fantastic. Note, once opened, keep in the fridge and use within a week or so.

Feijoa can be prolific. If you’ve got buckets of fruit, they can rot very quickly. My dad Eric has developed a method to ensure he keeps his feijoas harvest-fresh until he’s ready to process them. 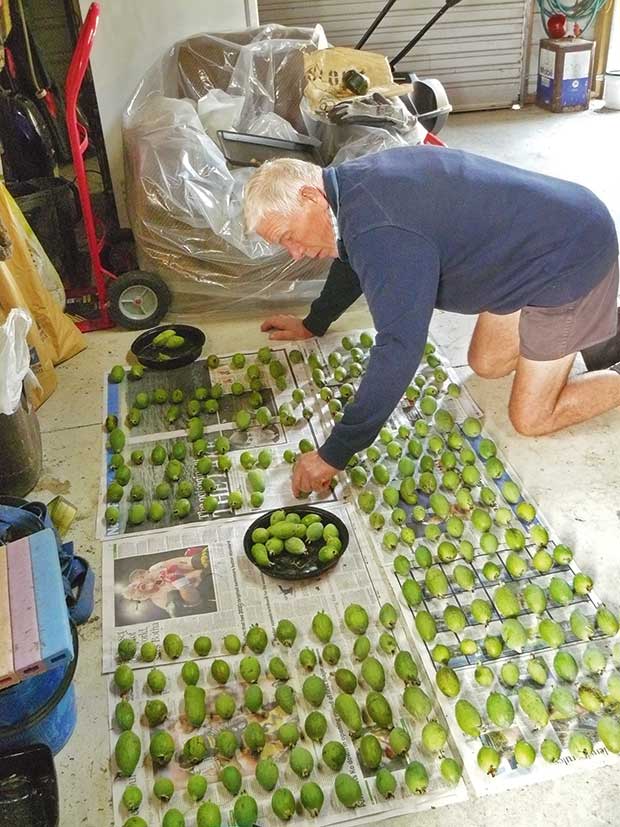 Every year when feijoa season starts, he clears a space on his garage floor. A big space. Each feijoa is laid down next to its neighbour on a tarp, but NOT touching. This is the key – no touching.

As he gathers more feijoas each day, he sorts out the ripe from the not-so-ripe and moves them around so that he doesn’t lose any.

He then scoops the flesh, freezes it, and stews it for breakfast. When I compared notes with him in December, he had just used his last bag  that week.