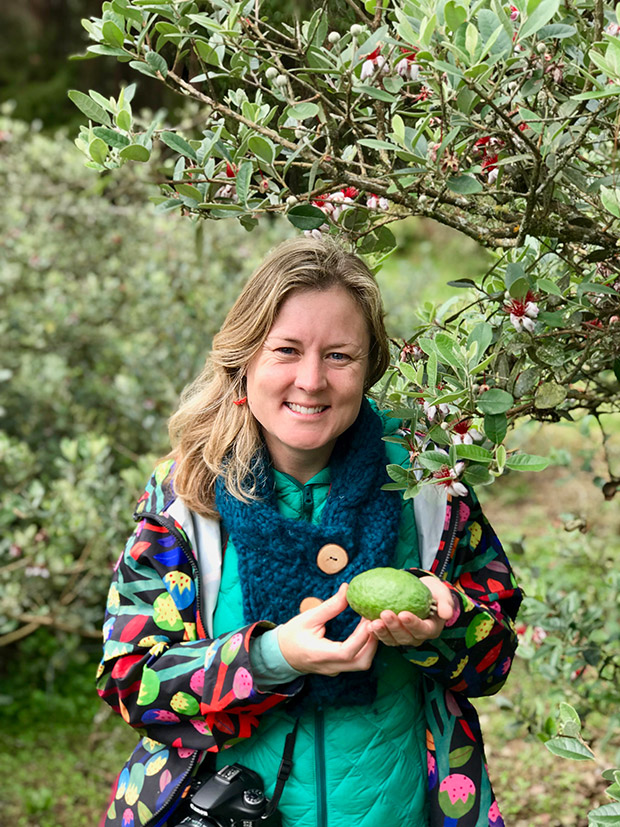 Kate holds a ripe feijoa next to a blossoming feijoa tree, a phenomenon unique to Colombia where feijoa trees flower and fruit year round.

Obsessed with a fruit many New Zealanders think of as their own, an award-winning journalist traveled the world to search for its roots.

‘Take care – free-range kids’ says the sign at the bottom of the gravel drive on a Raglan hillside lined with sunflowers. 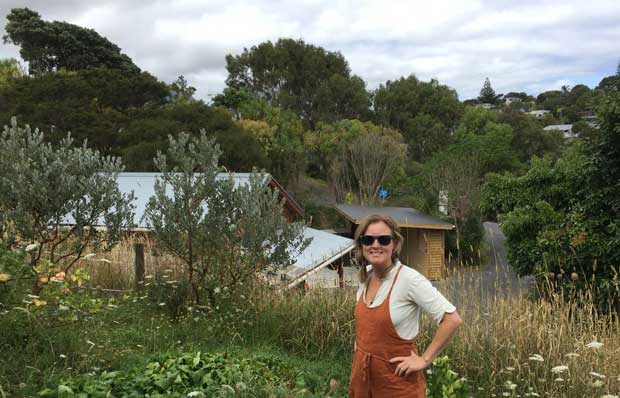 Kate Evans appears barefoot in overalls, followed by daughters Amalia (4) and Indigo (2), the younger one in her birthday suit, her bottom as brown as her legs.

Kate and her partner Sam McGlennon bought a hectare here in 2016 in partnership with her younger sister Monica and her partner. The land is dotted with multiple dwellings and the sisters, who are two years apart in age, share an office on the property – a former railway hut – as both are freelance science writers. 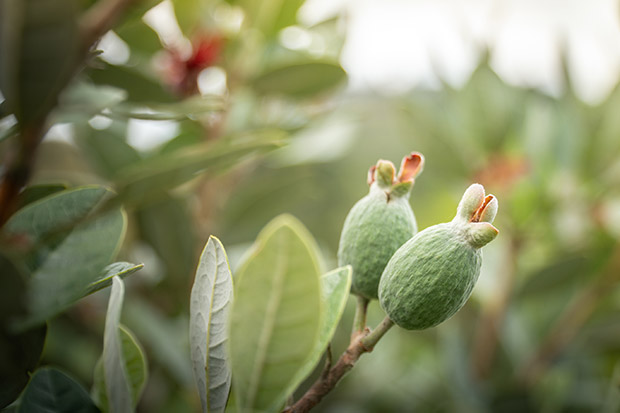 “We always dreamed of bringing up our kids together. We had children born 36 hours apart who now live next door to each other,” says Kate.

The 36-year-old has been enchanted with the feijoa since childhood and, within a year, had planted several varieties of to complement the quince, apples, apricots and avocados already thriving in the fertile Waikato soil.

Now, with whanau support, she is writing a book about her favourite fruit, a project she juggles around paid work. Two grants (one from the Winston Churchill Memorial Trust Fellowship, another from Creative New Zealand) have helped with travel costs and allowed her time to write. 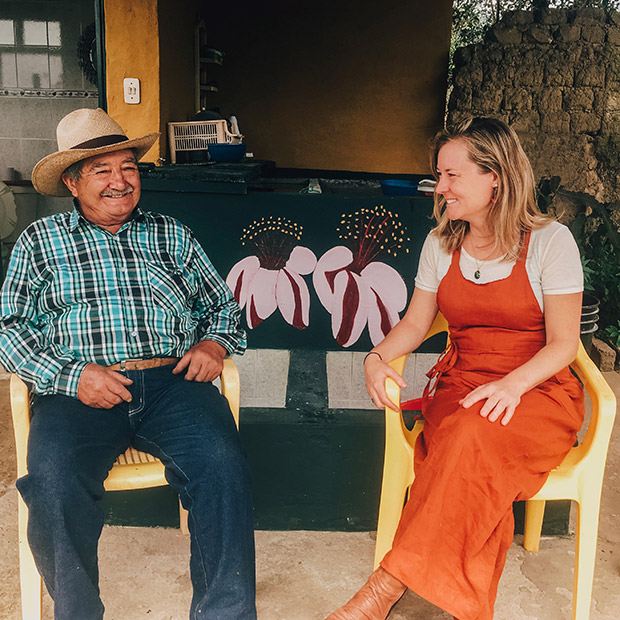 Kate describes herself as “feijoa nerd”. “I wanted to find out who the first person was to eat the feijoa,” she explains. “I have a special connection to them – the taste and the smell – and I also have an obsession with South America. And there’s the crossover – history, gardening and food, as well as traditions with food.”

Kate and Sam spent 12 years overseas before settling in Raglan and it was often feijoas that triggered homesickness for the peripatetic New Zealander. Sometimes she would pay $2 a pop in Australia when just a whiff of the creamy, gritty fruit would transport her back to her childhood in Leigh. In those days, arriving home from school, she’d devour as many of the little green treats as possible from the family’s feijoa hedge.

Kate began science writing while the couple spent time in Indonesia, where Sam was working on his PhD, focusing on tropical deforestation. After high school, she had completed her degree in journalism at the University of Sydney (her mother is Australian) and then spent a year in Italy “to learn the language”. After graduating, an internship took her to Phnom Penh and later Argentina, before she returned to Canberra to work for the ABC in current affairs.

HUMANS OF THE FEIJOA #9 Cecilia Salamanca de Ramírez Duitama, Colombia I’m 87 years old. I’ve been selling feijoas here at the Festival de la Feijoa in Tibasosa ever since it started, 32 years ago. I came every single year. Previously, I only sold freijoa. But now I also sell peaches, pears, apples, cherries, figs. Everything is from here in Boyacá. And here in this village they have given me affection, assistance and love. Do I like the feijoa? Of course! It’s what’s given me my bread every day. Sincerely — God, and these fruits. The feijoa is a great fruit to eat. It has many vitamins, especially when you eat the skin. You've got to eat it when the skin is a little soft. But if you're making juice, it doesn't matter if it's still a bit hard. To educate people about it, I offer the tourists a little fruit to try — just like I did with you. I like to eat it — and I like to see others enjoy it. I give thanks to my God for inventing the feijoa. #feijoa #accasellowiana #festivaldelafeijoa #tibasosa #boyaca #colombia #87años #freijoa #feijoafellowship #fruitlife #agricultoras

These days Kate contributes to NZ Geographic and has won two national awards for feature writing. She is also regularly published in international science magazines. Last March, she took 10 days off breastfeeding ‘Indy’ and headed to Brazil, the original home of the feijoa, where she went on a road-trip with three scientists studying different aspects of the fruit’s genetics, biology and culture.

When she headed off again in June 2019, she gave Indy her last feed at the airport check-in. Her first stop was the annual feijoa festival in Colombia. Although the fruit is not native to the country, Colombians are innovative in their use of it and make feijoa lollies, juices, milkshakes, ice-creams, cakes and a kind of creamy liqueur called Sabajón.

Feijoas have been grown in Europe since 1890. The French landscape gardener Édouard André went to Uruguay to design some parks in Montevideo, and returned home to the French Riviera with some feijoa seeds. He had just been given some land at Golfe-Juan where he built a house (he called it Villa Colombia as he had adventured extensively there 15 years earlier.) In the garden he planted some feijoas. They thrived, and he began promoting them to the world in the journal he edited. Most of Feijoas grown today in NZ, Colombia, and the US descend from this introduction, so I wanted to find the ‘grandmother feijoa’ of them all. Unfortunately, the villa’s name was changed when the André family sold the property in 1925, and no one knew exactly where it was. So I teamed up with Florence André, Édouard’s great-granddaughter, and we scoured the Cannes municipal archives. Florence had the André family photo album from the time, plus a tip that the new name was Villa Endymion. In the real estate records we found photos and maps, and they seemed to match with her old photos – and then we found a direct reference to the house having once been André’s. Then, off to look for the site! #feijoa #history #planthistory #acclimatization #acclimatisation #accasellowiana #edouardandre #édouardandré #golfejuan #cannes #rivieragardens #gardenhistory #landscapearchitecture #landscapedesign #sherlockholmes #holygrail

She also went to southern France, where a French landscaper planted the first feijoa in Europe that he had collected in Montevideo, Uruguay’s capital. The highlight of that trip was meeting the great-granddaughter of the Frenchman and rediscovering his original garden, complete with a feijoa tree. 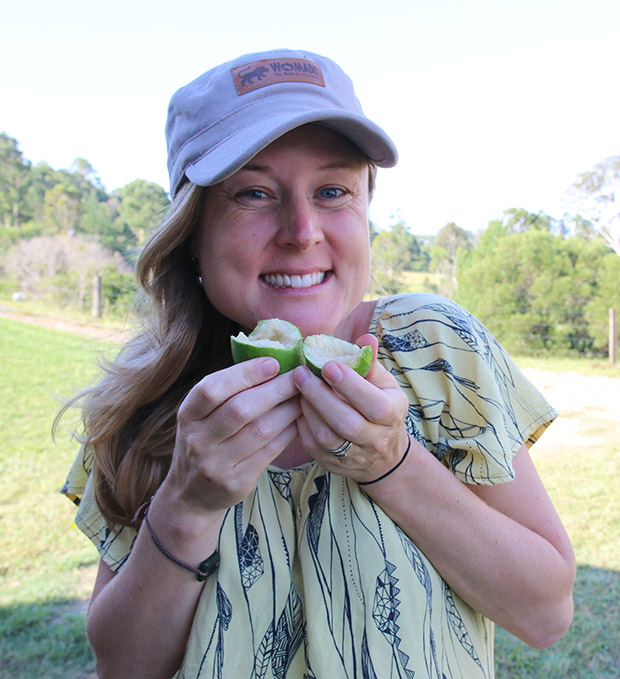 Kate with a feijoa in Queensland.

Before returning home, Kate detoured to Berlin, keen to see the diaries and sketches made by a German botanist who explored Brazil and ‘discovered’ the feijoa in the 1820s.

She has recorded her travels on Instagram and now has a following of “die-hard feijoa fans”. “Their feedback gave me more confidence to carry on with the book,” she says.

Now that’s more like it! This one was grown by a farmer in the high plateau of Santa Catarina near São Joaquim in Brazil. He said he has one tree that fruited in August last year – middle of winter! Normally their season runs until May or June, just like in NZ.

Enthusiastic backing has come from other quarters too, especially through Patreon, an American-based membership platform that allows artists and writers to receive funding directly from people who support their efforts.

“I have around 30 supporters at present – some of them I don’t know – but it allows me to spend more time working on the book. It also gives me the encouragement I need and makes me accountable. It motivates me to finish it.” 1. The fruit is native to the highlands of southern Brazil, Uruguay and northern Argentina. Indigenous and Afro-Brazilians use feijoa leaves to make a medicinal tea to treat a number of health complaints.

2. The feijoa is from the myrtaceae family, like the pōhutukawa and the eucalytpus.

3. It’s not known exactly when feijoas were introduced to New Zealand, though it’s thought they arrived by 1910.

4. The trees usually fruit two to three years after planting. They grow between 1-7 metres tall.

5. In the US, the fruit is sometimes called ‘pineapple guava’, while in Brazil it’s goiaba-da serra, and in Uruguay guayabo del país.

7. Their flower petals are edible and delicious because they’re designed to attract fruit-eating birds as pollinators.
Colombia’s tropical climate – with days that are always the same length – means feijoas there flower and fruit all year round.