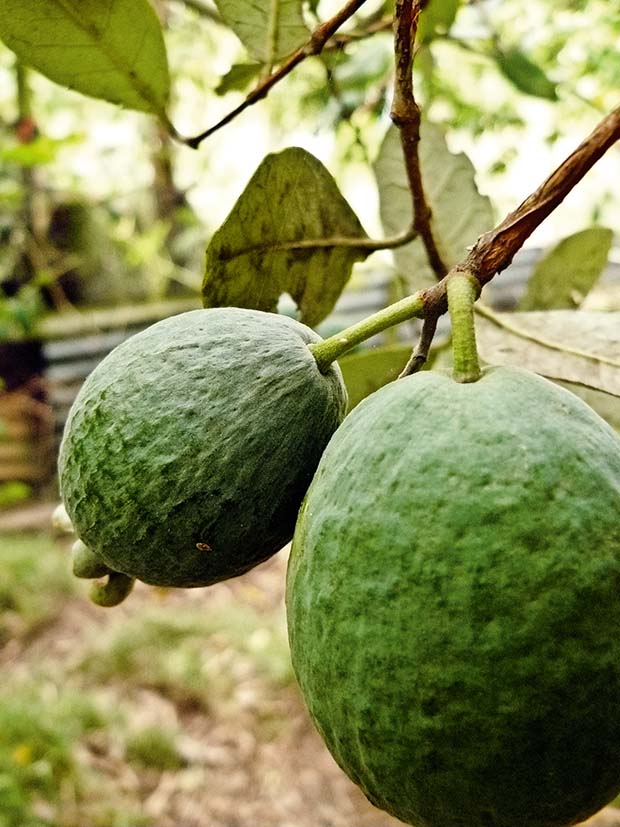 Kristina has seen the light when it comes to the magic flavour of her favourite fruit.

If you were watching me eat feijoas right at this minute, the thought would not even cross your mind that I may be a person who has had a life Before Feijoas and a life After Feijoas.

It would appear obvious that I am someone who has always adored these unassuming egg-shaped fruit with their perfect balance of sweet and sour. I eagerly await the inevitable annual feijoa glut and delight in the seemingly huge variation in taste, size and number of seed pulp ‘arms’. One family I know spends the season seeking out the ‘niners’ from their extremely prolific trees. For the uninitiated, a ‘niner’ is a feijoa with nine seed pulp arms – the arms appear when you cut a feijoa in half and numbers higher than nine are extremely rare. Thanks for making eating feijoas even more fun, Tasman and Arran!

In my BF childhood, I honestly thought feijoas smelled like puke. Nothing would persuade me otherwise to let one pass my lips. At the grand old age of 24, while living at the Wilderland Community near Whitianga, I finally said yes and promptly gave myself a dose of the runs from eating far too many. Since then I haven’t looked back and have spent the next 24 years creating recipes that use them up.

Feijoas made their way into New Zealand in the 1920s. They’re named after a Brazilian botantist fellow named João da Silva Feijó but I’ve met up with South American folks who stare at me eating feijoas as if I am mad. Apparently, they are considered stock fodder in many areas and people don’t eat them.

But lots of other people agree with me. Feijoas grow all over the world now but are often referred to as pineapple guavas.

The distinctive aroma of the feijoa – one internet site referred to it as a ‘potent smell that resembles that of a fine perfume’ – is due to the ester methyl benzoate in the fruit. As an interesting aside, drug sniffing dogs are trained to detect the smell of methyl benzoate because cocaine hydrolyses in moist air and gives off this gas so don’t put feijoas in your pockets if you’re going to get someone from an international airport!

Feijoas never seem to do things by halves. Every year without fail there are suddenly bucketfuls of them on every doorstep and every third block has a roadside stall. It literally rains feijoas in some parts of the country and it’s good to have something to do with them that’s quick and easy so you can have them all year-round in one form or another.

I’m not a lazy cook but I do like simplicity when it comes to time in the kitchen. I am often torn between my love of gardening and being outside and my love of cooking, but at the end of the day I would actually rather grow it than cook it. When I was thinking about which recipe to include here I started thinking, how about creating a recipe that does everything? Multi-purpose if you like, so although I call this feijoa bread, it turns out a good cake or batch of muffins. It’s all up to the needs of the moment and the whim and fancy of the cook really.

Given that I plucked from here and stole from there, I’d like to thank three separate parties for sharing their recipes with me and beg their forgiveness for rolling them all into one: Alison Holst for her Feijoa Muffin recipe, Jean Hollis for her Feijoa Cake or Muffin recipe and the Keany family of Atiamuri for their inclusion of Feijoa Loaf in the 2003 School Cookbook.

My father has a very thorough system for keeping feijoas from going rotten during the season. Whatever you do, don’t leave them sitting about in buckets! They’ll go off very quickly because they are touching each other. Lay a clean tarpaulin on the floor of a shed, garage or cool room in your house and lay feijoas on it so they don’t touch.

This is part one of his secret method for getting the most from your crop. The second is to keep rotating them so that you eat the oldest ones first. Every morning during feijoa season, Dad’s out there removing the oldest ones from the tarp in the garage and moving everyone else up a notch so he can add the latest pickings.

3 GREAT THINGS TO DO WITH FEIJOAS 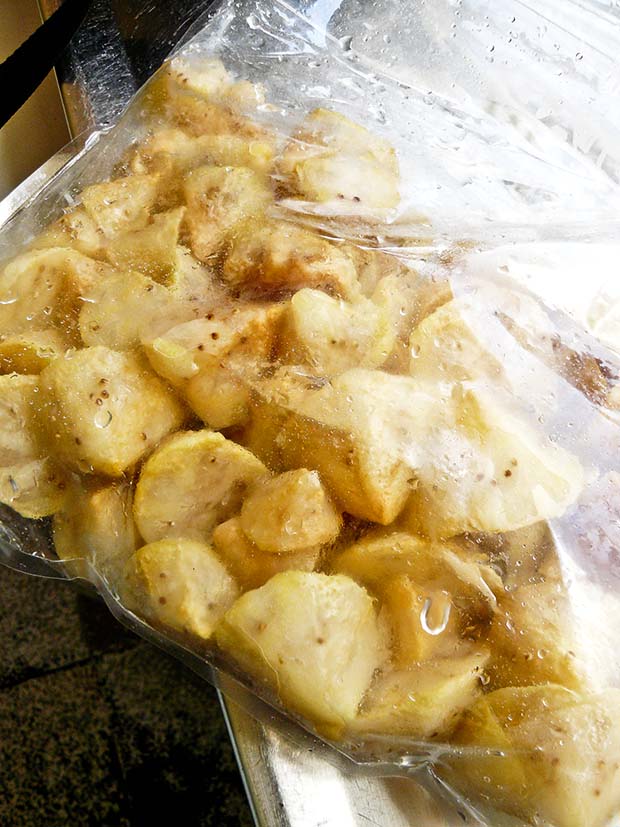 1. One way of dealing with bigger specimens is to peel them with a potato peeler, chop them in half and throw them into freezer bags.

2. Frozen halves stew up to produce a most unique and delectable creamy texture so this is by far my preferred method. I scoop and puree a batch of feijoa pulp and then divide it up into 1.5 cup bags or a container-full. This makes it dead easy to throw a delicious feijoa bread together whenever I need it. I like to leave some of the scooped pulp chunky for jam, pie fillings, crumbles and muffins.

3. If you simply don’t have time for peeling or scooping, you can freeze feijoas whole. 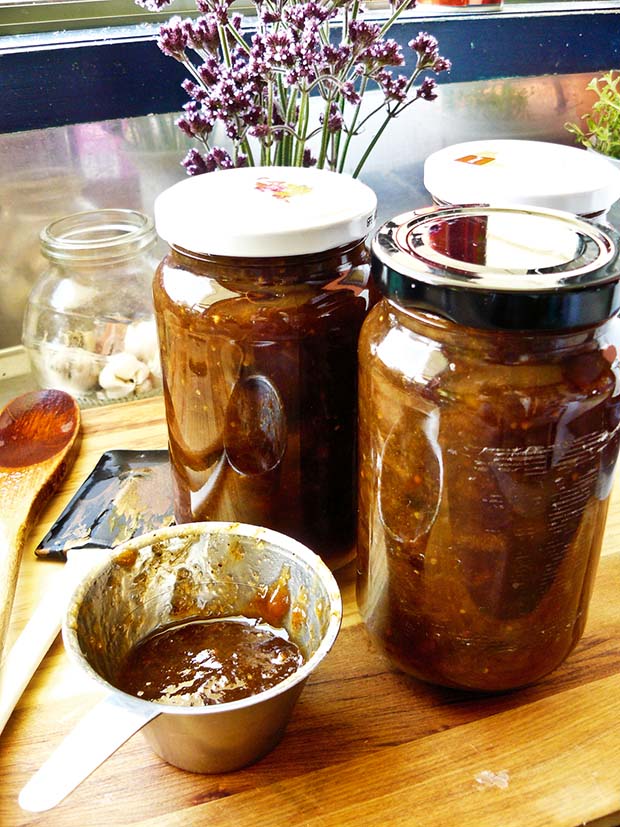 This feijoa chutney recipe is incredibly good with pork.

Combine all ingredients in a large heavy-bottomed saucepan and stir over a medium heat until sugar dissolves. Simmer for 1½ hours, stirring occasionally until the chutney gets really thick. Ladle into hot sterilised jars, and seal with sterilised lids.

Store in a cool dark place for a month before opening. Keeps for up to 12 months. Refrigerate after opening. 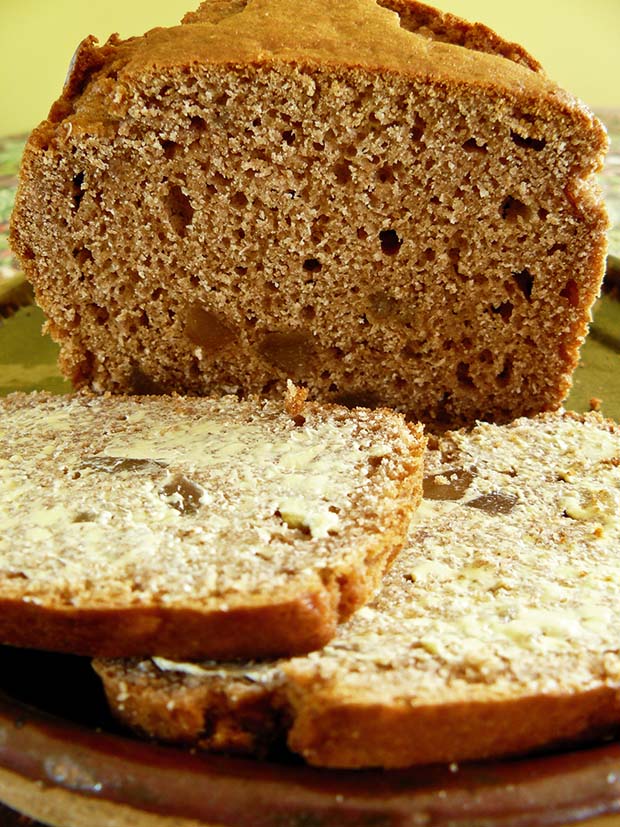 Simmer the butter, feijoas, sugar and water for 5 minutes. Stir in the baking soda and leave to cool. Add eggs, then sifted dry ingredients and crystallised ginger and stir until just mixed. Bake in a loaf tin (30 minutes), cake tin (40 minutes) or muffin trays (20 minutes) at 180°C.