Why watercress is the king of superfoods 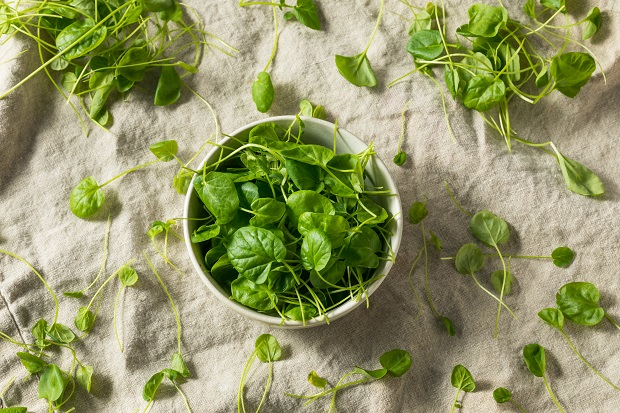 Watercress is the most nutritious plant you can grow in your garden.

Trolling the aisles at our new supermarket, I spotted a lushly luxuriant mass of verdant foliage spilling out of its cellophane packet. Just beside the apples, and spilling into the bananas. A watercress plant.

Something deep in the near-dormant recipe compartment of my memory went ‘ping’ and I recalled a recipe for a watercress salad with walnuts and balsamic vinegar. Into the trolley it went, along with six other items not on my grocery list. Once home I remembered the plant in the car – most unusual – and I even read the instructions on the label, placing the tiny root-bound mass in the recommended 3cm of water on the windowsill. I then promptly forgot all about it.

My husband found it 24 hours later, rescuing what was now a wilted and dried-up frizzle. What is it about the word WATERcress that doesn’t indicate it might need a heap of water? Lesson one. Watercress (Nasturtium officinale) is an aquatic plant. In the wild it grows more in the water than out, its hollow branching stems and foliage trailing for up to a metre underwater with just the top 10-15cm visible above the water’s surface. From early summer to mid-autumn, small, white to purplish white, mustard-like flowers are borne at the tips of the stems. 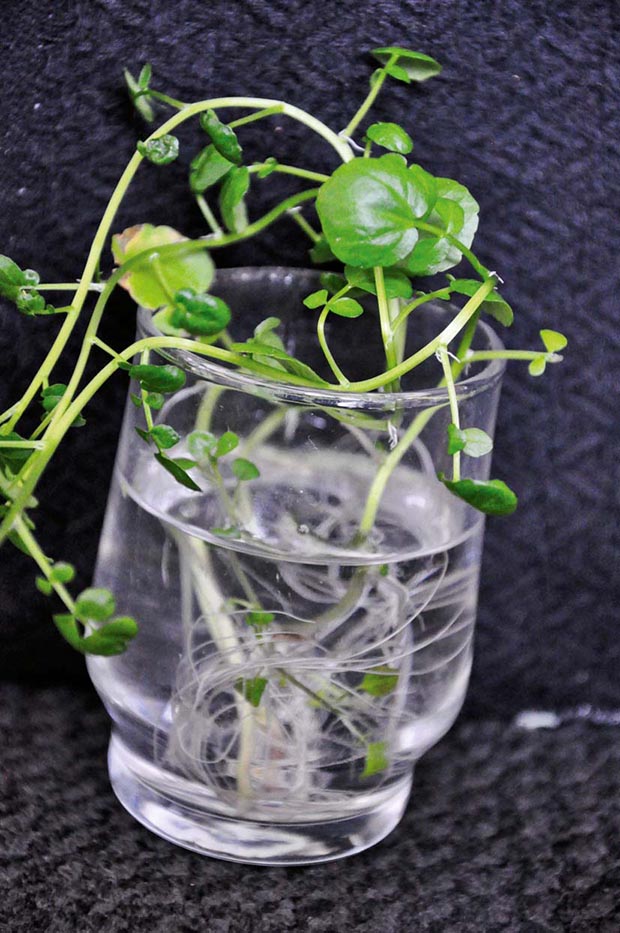 Watercress is originally from somewhere in western Asia, but is now found in most temperate climates, growing thickly along the margins of fresh running water, especially if it has a high lime content. Commercially-sold watercress is grown in specially-prepared beds fed by clean running water. It is reliably perennial and can fill a gap in spring and autumn when mesclun and spicy salad greens are in short supply.

Culpepper said that the bruised leaves or juice would ‘free the face from blotches, spots and blemishes…’ so I tried it on a persistent dose of eczema on my right leg. I mashed up some leaves and slathered it on for a pleasant, instant, cooling effect. Sadly I did not repeat the treatment and there was no lasting effect, other than a trail of macerated watercress gunk on the carpet where my makeshift bandage leaked. I decided it might be safer – and tidier – to eat the leaves instead.

My semi-revived watercress plant is now in convalescence under a leaking tap in the garden. It’s not looking too hot so I’ve hedged my bets and taken some cuttings which are rooting nicely on the windowsill, and also ordered seeds. This will be the first time I have asked my husband not to fix a leaky tap! 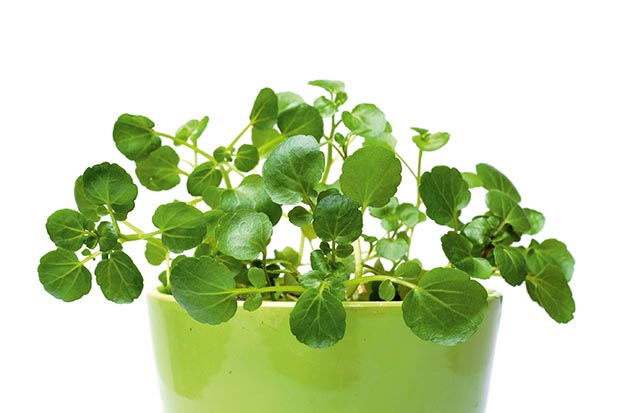 WHY WATERCRESS IS THE KING OF SUPERFOODS

Watercress was once a staple of the poor man’s diet, but it seems to have fallen off the menu in recent years. It’s a pity because this member of the mustard family is a highly versatile and extremely healthy green to add to your cooking repertoire. Even better, it’s considered the most nutrient-dense naturally-occurring vegetable you can eat.

Watercress is exceptionally high in antioxidant vitamins A and C, and vitamin K, and was greatly valued as a treatment for scurvy. As a percentage of daily allowance, two cups of watercress provides a whopping 212% of vitamin K, 48% of vitamin C and 44% of vitamin A. In addition it provides smaller but significant amounts of calcium, manganese, potassium, vitamin E, thiamine, riboflavin, vitamin B6, magnesium and phosphorus.

The zesty, peppery taste of watercress will enliven any salad. Watercress is more tender than kale and collard greens and will sauté faster, giving a mild, peppery flavour to any dish. Chinese cooks stir-fry it or simmer it in soup. Since earliest times watercress has been highly valued as a medicine. The Romans thought of cress as a vigorous stimulant and would advise sluggish people to ‘eat some cress!’

The so-called father of medicine, Hippocrates, used watercress to treat his patients and he so valued it that he built his first hospital close to a stream where the herb grew so he would have a constant source. Watercress was also used as an appetite stimulant and tonic herb for anaemia, weak heart and eyesight and to increase milk flow. Today, studies on watercress are showing promise for its potential in preventing and managing cancer. DOES WATERCRESS FIGHT CANCER?
New evidence suggests that watercress may lower the risk of prostate, breast and colon cancer and counteract the processes by which these cancers spread. Its anti-cancer activity may stem from its ability to increase anti-oxidant levels and protect DNA against damage.

This was shown in a promising eight week study at the University of Ulster, where 60 men and women ingested 3 ounces of watercress daily for eight weeks. Results showed a 17% reduction in basal DNA damage and significantly increased antioxidant levels. Beta-carotene increased by 33% and lutein levels increased by a whopping 100%.

Watercress is a member of the broccoli family (Cruciferae), and is especially rich in phytochemicals, in particular nasturtiin which hydrolyses to produce phenyl isothiocyanate (PEITC). PEITC inhibits the liver enzymes which activate many carcinogens in animals, and induces other enzymes which enhance carcinogen excretion. Studies on rats show watercress may also help protect healthy tissues during radiation and chemotherapy treatments.