Tim Ryan: “We are unapologetically here to disrupt dairy.”

Once upon a time, there was a young, ambitious New Zealander called Tim Ryan. He lived in the glamorous cities of London, Amsterdam and New York and worked in the fast-paced world of communications, but he was always hungry for something else.

One day, while supposedly living the dream in Amsterdam, he woke up and thought, “What I really want to do is go home and make oat milk.” So that’s what he did.

Where does the oat milk come into it? Well, that’s a story in itself. “Funnily enough, it all starts with Tim’s vegan ex-girlfriend,” Tim’s business partner Chris Wilkie says. “That’s where the idea came from.”

The tale begins a decade ago when Tim moved to London. He was new in town, and his head was turned by the hip café across the road, which used a brand of Swedish oat milk.

“I was struggling to adapt to the lifestyle changes of living in London – in New Zealand I’d been living in Queenstown – and I decided to try going vegan. When I tasted this oat milk in my coffee, I was sold straight away. It was lighter and had a caramel-y flavour. I thought, ‘Wow, oat milk. I could do that in New Zealand.’” 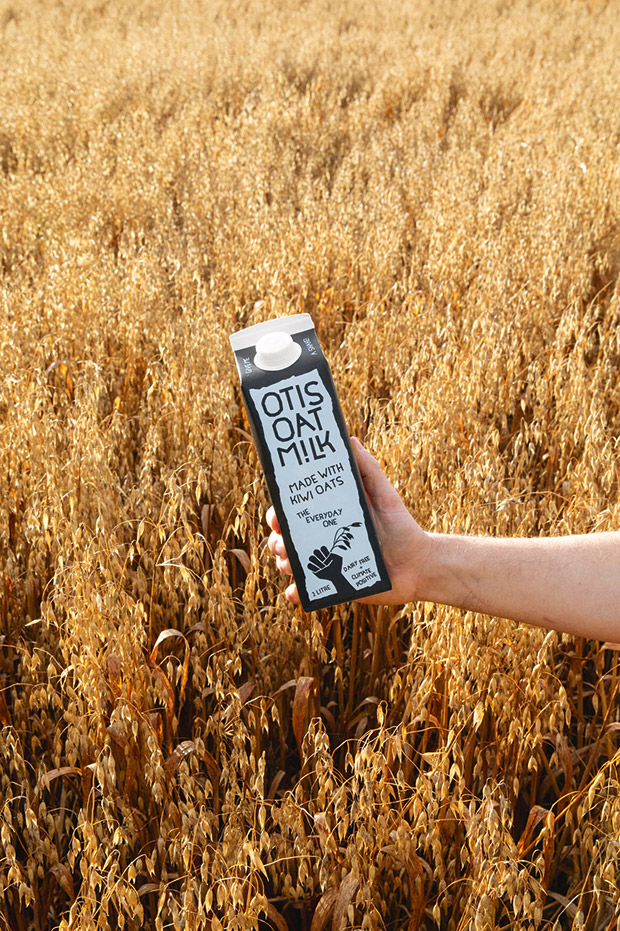 Oat milk was a niche product in those days, but it has since developed a cult-like following. Oats are high in fibre, minerals and antioxidants, and they’re linked to a reduced risk of heart disease. Oat milk contains about half the fat of its dairy equivalent and requires far fewer inputs for production.

Tim, who grew up on a Canterbury sheep, deer and cropping farm, knew that New Zealand could grow oats well. But then life and work intervened. He moved to Amsterdam and headed Nike’s global communications. His dreams of making oat milk took a back seat until he came back to New Zealand for a holiday in 2015.

“That’s when the penny dropped. We drove across the Canterbury Plains to my family’s holiday house at Lake Ōhau. It used to be beautifully green and rolling with lush heritage farms, and all of a sudden it was bulldozed land with centre-pivot irrigators, covered in grass that grows in 10 days. It really scared me.” 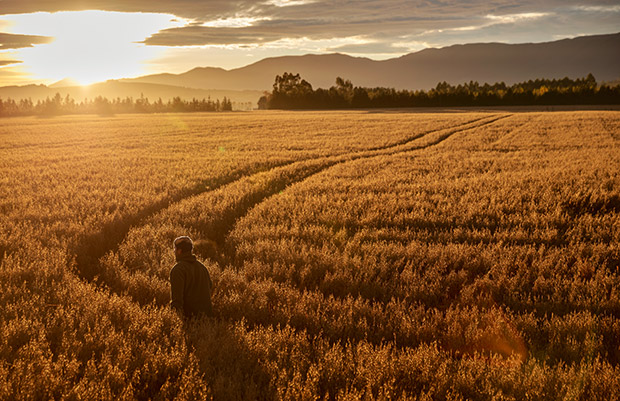 New Zealand’s first homegrown oat milk is made from these oats, grown in Canterbury.

He went back to Amsterdam but started using the downtime on transatlantic business flights to develop a plan. While working on an ad campaign in New York, something snapped.

“I was totally rinsed out. I’d fallen out of love with the creativity, and that was the one thing that kept me going. I missed home and the mountains. So, in December 2017, I quit my job, broke up with my girlfriend and delivered my belongings to a friend in London so I could come back to New Zealand. I thought it was time to do something that mattered.”

A friend needed a shepherd on his south Westland station, so Tim went straight there and worked for six months to reset. “Then I broke my wrist, which forced me to move back to Christchurch and start my foray into product development.” By this time, his worldly goods had turned up from the northern hemisphere, so he drove up to Wellington to collect them from his old university mate Chris Wilkie, who had recently returned from London with his young family.

Chris, who describes himself as a “serial entrepreneur”, was also looking for a new project. A day after they met up and Tim shared his business plan, Chris was in, along with another university friend and designer, Sam Flaherty. Otis Oat Milk was born.

“We didn’t ponder anything; we didn’t muck around, we just dived right in,” Chris says. “The timing couldn’t have been better.”

“Wilkie, Sam and I work seamlessly together,” Tim says. “We partnered quickly with Foodsouth (the South Island hub of the New Zealand Food Innovation Network), and they challenged us a lot on the realities of setting something like this up because I think they get a lot of dreamers.”

More stories you might like:
How the Big Bang Theory transformed Glenn Jones' art and design business At home, oat-milk production usually involves soaking oats in water, then squeezing out the resulting liquid through fine muslin. That’s impractical on a commercial scale, says Chris. Instead, they devised a method where the oats are made into a type of porridge. Adding natural fruit-based enzymes enables them to speed up the process, so this mixture cooks more quickly.

“We still have to filter out some by-product, but there’s way less than if we were squeezing it,” Chris says. “It also means you get a lot more nutrition in the milk.”

Says Tim: “The leftover material is really high in protein, so we’re experimenting with using that for lots of other products. It’s obviously very good for animal feed, but we want to investigate other uses to feed the world with Kiwi oats.” Within six months, they were making milk at Foodsouth “that was tasting pretty amazing”, using oats from Southland and Otago. They started running blind tests, getting baristas to explore how the milk behaved when frothed.

In April 2019, they delivered their first five-litre pack of Otis Oat Milk to a Dunedin café. By the end of their first month, there were 10 cafés on the books, and now they supply more than 150 businesses nationwide.

Serendipitously, the Swedish oat-milk experts whose product Tim was so impressed with back in 2010 have now come on as consultants, helping them refine what they do. In August, one-litre packs of Otis Oat Milk will start appearing in supermarkets. While a lot of the milk is still made at Foodsouth, they’re hoping their own purpose-built facility will be a reality in the next year.

Growth is good, but it’s a means to an end greater than just personal business success, Tim says. “We are unapologetically here to disrupt dairy. We’re not anti-farmer, we just think we need some new ideas. If Otis helps us raise that platform and knock down barriers for a whole bunch of plant-based food and beverage start-ups, we’ve done our job.

More stories you might like:
The gin gardener: This organic 'gin garden' in Hastings is brimming with botanicals 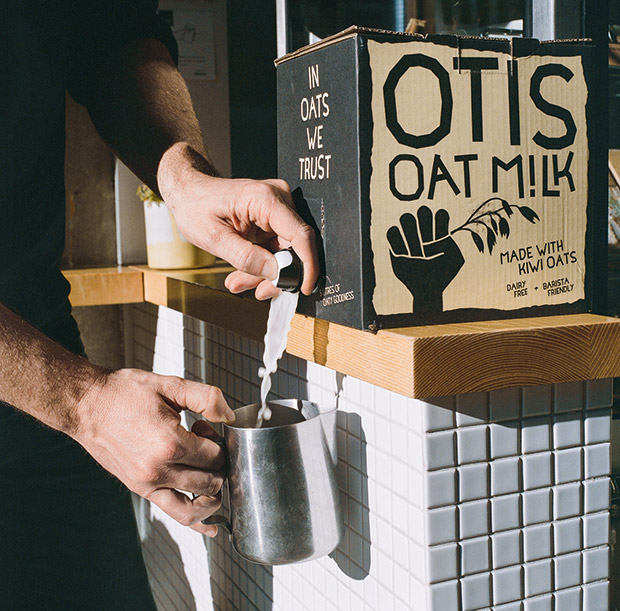 “As a nation, we’ve been the best in the world at producing dairy. Let’s also be the best at producing plant-based food and beverages for the world.”

“We want to tell our kids that we genuinely tried to do something to make the environment better,” adds Chris. “No one’s saying we should turn all the dairy farms into oat farms, but this is one little piece of the puzzle that can help. We need real, diverse solutions to complicated problems. We’re not perfect, but we’re not going to let that stop us from giving this a genuine crack. Our goal is environmental change.”

They’re hopeful that traditional milk drinkers will realize their product is versatile and delicious.

“Anything you can make out of cow’s milk, you can make with oat milk,” Tim says. “We have our hands full at the moment, but there are huge possibilities.”

Chris Wilkie calls this drink, which is similar to a white russian, “the best nightcap ever”.
Russian Oat. Fill a glass with ice, add one shot of vodka, one shot of kahlua, and two shots of Otis Oat Milk. Drink immediately. Serves 1. Margo and Rosa Flanagan (aka Two Raw Sisters) are big fans of Otis Oat Milk and say its natural sweetness makes it the best plant-based milk to use in smoothies, baking and ice creams. They devised this recipe.

Miso adds salty flavour to this smoothie, while the frozen zucchini bulks it up and makes it light and fluffy without having to add too much fruit.

Put all ingredients in a blender and whiz until smooth and thick. Serve immediately or store in an airtight jar in the fridge for up to two days. Serves 1