A devastating diagnosis forced an ambitious athlete to give up the sports she loved. Determined to keep exercising, she took the plunge into ocean swimming.

On Joni Bentham’s living room wall is a framed poster of a woman underwater. Her hair is long and glossy black, and she is wearing a cheery pink-and-white striped swimming costume.

Arms outstretched, legs straight, she is deep below the surface of the ocean. Although her face is not visible, one senses that were she to spin around, her expression would be joyful.

At the base of the picture is the phrase, ‘And into the ocean I go to lose my mind and find my soul.’ The words resonate with Joni; the ocean has become her happy place.

It’s where she can quiet busy thoughts and wash stresses away. It is the only environment where she is as able-bodied as the next person, where the disease she was diagnosed with 15 years ago is not apparent. The ocean is where Joni can park the fact that she has multiple sclerosis (MS).

Joni’s journey to ocean swimming has been a long one. She will be forever thankful that her parents made sure she and her siblings learned how to swim, driving them from their Waikato farm into Matamata, where there was a 25-metre pool. It was a trip often made, especially when Joni began to swim competitively; she was nationally ranked in breaststroke.

Later, nearing the end of her school days, she found a way to combine her love of swimming with running — another sporting passion — and took up triathlons. During an event held in the South Island, she had to swim 400 metres in Lyttelton harbour. “There were waves. I thought, ‘Wow, this is horrible,’” she says.

Although the attraction of swimming in the sea wasn’t immediate, swimming remained part of her fitness routine. The exercise was a vital component of her life; she loved it. And throughout her years of study — she is a qualified radiographer — travel and work, she continued to push herself physically, competing in triathlons and endurance events.

But when she was in her late 20s, things went awry. “I started getting these symptoms — a lack of coordination down one side and feeling fatigued. Having studied radiography, I had some medical knowledge, and I thought MS was a possibility.”

When a visit to a neurologist confirmed her diagnosis, her initial reaction was one of relief. Relief that she didn’t have a brain tumour. Then reality set in. She did have MS. Her world as she knew it was forever changed. The learning curve, the acceptance of her changed circumstances, was a gradual process. 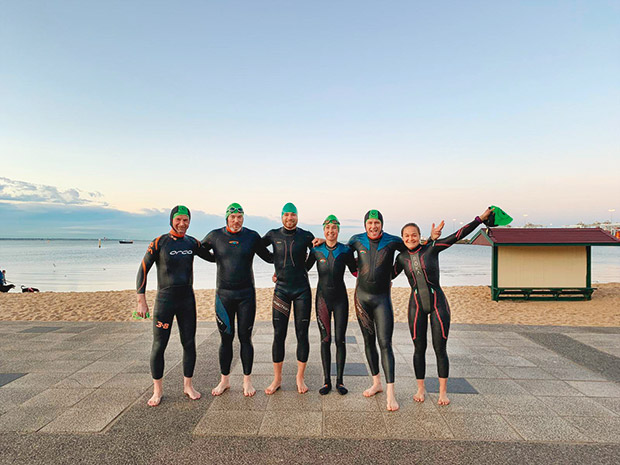 A series of events plus a circuitous route — from Auckland to Mount Maunganui via Queenstown and Melbourne — would lead her back to ocean swimming. Initially, in stepping away from the athletic frontline, Joni found herself in demand as a coach for triathletes and multi-sporters who needed to improve their swimming skills. She loved the teaching.

Eight years ago, she moved to Melbourne, having secured a radiography position at the Royal Dental Hospital of Melbourne. Her work environment was stimulating, and away from it, she remained keen to challenge herself through sport.

With running no longer an option due to the weakness in her legs, she turned to swimming. Living in the city, access to a pool was easy. With it came the bonus of fellow swim enthusiasts. Last year, the pools were forced to close during the lockdown. Not wanting to forego swimming, the group looked for an alternative and headed for the sea.

Swimming in Port Phillip Bay in a Melbourne mid-winter is not for the faint-hearted. Despite wearing a wetsuit, booties, gloves and a cap, Joni says the water was bone-chilling and mind-numbing. And yet she loved it, became addicted to swimming in the ocean.

“The benefits were huge — going from a chlorinated, claustrophobic pool to the beautiful wide-open space of the ocean. Instead of coming home smelling of chlorine — an odour almost impossible to get off your skin — I was rinsing little bits of shell and sand off my wetsuit. It was much more exciting.”

There were other benefits too. After two months of ocean swimming, Joni noticed a gradual improvement in her symptoms, and she looked and felt healthier.

Since returning to Mount Maunganui late last year, she has joined two ocean swimming groups — one serious, the other social — and swims three times a week.

“There is something about exercising in nature, about being in an unpredictable environment. It’s always different, the ocean is full of extremes, and that’s part of the excitement. What’s it going to be like today? It might be rough and choppy, or it could be a millpond.

“You feel like a foreigner in a blissful yet intimidating underwater wilderness, but at the same time, there is a sense of belonging. Your senses are heightened. You have to be alert to possible dangers — dark spaces can be scary, but they’re usually only large rocks, and I’ve never seen a shark. You’re also alert to the ocean’s beauty, to the bright green sea lettuce, colourful fish that dart playfully, giant stingrays gliding metres below us.

“Back on the beach, you get this post-swim euphoria. Everyone is grinning and chatting. ‘Did you see that iridescent fish?’ ‘What about the stupendous sunrise?’”

A swim around the Mount is 3.8 kilometres, and depending on the tide and current, Joni does it in 65 to 85 minutes. She recently took part in an Ocean Swim Series event at the Mount’s main beach, completing the 2.8-kilometre swim in 59 minutes and raising well in excess of $1000 for the Bay of Plenty
MS Society.

The swim was a personal victory. MS might have dulled Joni’s athletic prowess, but it has not destroyed her spirit. She has embraced ocean swimming, adores it, while recognizing its inextricable connection to her disease or, as she terms it, her restriction: facing her fears, wondering what lurks beneath the surface, what the future holds, seeing beauty in the underworld.

“It’s liberating doing something that could be dangerous,” she says. “But as long as I have my challenge, I’m fine.”

1. Skills. Spend time in a pool before taking the plunge into the ocean. It is important to be confident. A confident swimmer is more at ease, making it easier to maintain a comfortable rhythm, which lessens anxiety.

2. Technique. Freestyle is the most efficient stroke in open water and it is beneficial to be competent in a second stroke, such as breaststroke, which requires
less energy. Adult swim-technique sessions, with an emphasis on ocean swimming, can build confidence.

4. Be aware. Keep an eye out for boats, jet skis and kite surfers. Choose a bay or a shallow area where it is possible to see or touch the bottom.

Find a friend. When swimming in the ocean, it is best to either buddy up with a friend or join an established group. It’s not only more fun, but it is also safer.

Avoid swimming alone. A safety tow float is helpful as it ensures swimmers are visible to boaties.

Kit and equipment. Goggles should fit snugly, be comfortable and not leak. It is worth investing in a good pair as they enhance the swimming experience. A brightly coloured swim cap also ensures swimmers are easy to see.

A wetsuit is optional but worth serious consideration. Saltwater aids buoyancy, making swimming in the sea easier than in a pool, and a wetsuit further increases buoyancy. The layer of neoprene insulation also adds warmth. Choose an ocean swim brand (they are more flexible and slimline) over a surfing brand. If cost is a factor, check out second-hand options.