Mother and son racing team rally on in Suzuki Swift Brenda Williamson is as competent managing a private hospital as she is navigating tight corners.

For a woman who can approach hairpin bends on gravel roads at speeds of up to 180 kilometres an hour, and likely end up airborne, Brenda Williamson comes across as remarkably grounded. “You can’t be stressed in a rally car. You must be able to multi-task. You must be at your very best. The driver totally relies on you to deliver the results.”

Brenda (53) is a rally co-driver in a 2009 Suzuki Swift, which – if it had not been modified to within an oil slick of its life – might be a car she would otherwise drive to the supermarket. The rally driver – and the man behind the transformation of the zippy little runabout to turbo-charged, super-spec rally car – is Jack, her 25-year-old son.

The pair is used to surprised looks when they reveal their relationship. “There are lots of female co-drivers – partners, sisters – but we’re the only mother and son,” says Brenda. When they compete in a rally, their roles supplant any traditional mother/son relationship, she says. “We are both there to do a job. As a co-driver, my job is to help him drive the best he can.” 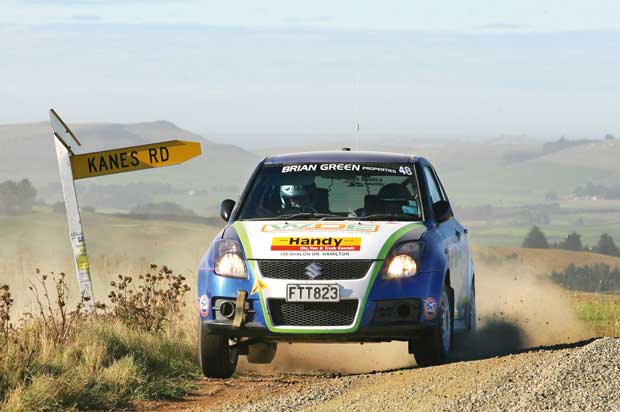 The story began six years ago when Jack told his parents Brenda and Steve that he wanted to buy a motorbike. His proposal, he says, was strategic. What he really wanted was a rally car. He knew that compared with a bike, the car would be an easier sell. They agreed to him buying an old rear-wheel-drive DX Corolla.

As his skill and enthusiasm grew, his parents got involved. Steve, who farms a 138-hectare sheep and cattle property near Raglan, is Jack’s “workshop apprentice” and helps get the car to rallies. Brenda, whose day job is finance manager and deputy chief executive of Braemar Hospital in Hamilton, got into the co-driver seat. The Corolla was traded for the Swift.

“Originally it was temporary,” says Brenda. “It’s hard to find co-drivers who can commit to six weeks a year.” But she found she loved it. According to her son, she’s also very good.
The co-driver’s job is to navigate by reading a set of shorthand pace notes (the details of the route) to the driver so they know what lies ahead, the degree of any turn and any obstacles. All this at lightning speed, often on gravel and sometimes airborne as they crest a rise. If the co-driver miscues the driver by a fraction of a second, the car will likely crash. The role demands a clear and calm head and high concentration. Too much adrenalin might affect control.

Brenda doesn’t watch the road – in fact, from her low-set seat, she can barely see over the dashboard. Her focus is on the pace notes and two computers in the car. She applies the same skills she uses in her job. “It’s all about planning and problem-solving under pressure.”

Jack says her weight – 55 kilogrammes – is also an asset. But a co-driver also must help with maintenance during the race so fitness is essential. Brenda walks six to eight kilometres a day; Jack bikes up to 100 kilometres and runs 70 kilometres a week.

More stories you might like:
Chef Michael Van de Elzen returns to his rural roots with a lifestyle block in Muriwai

Brenda says rallying doesn’t scare her, because the safety regulations are so tight. “I feel safer in a rally car than driving into work. In a rally stage, there is no oncoming traffic.”

There have been some near-misses during races, and a few scrapes with fences. Plus, some best-forgotten moments, says Jack, “like at our first rally when she gave me the first instruction to go left instead of right”.

The pair are making their way up the rally ladder board of the New Zealand Rally Championship. At the challenging National Rally of Whangarei, they finished first in their class and 14th overall. Jack has recently joined rally star Hayden Paddon’s New Zealand team and the Paddon Rally Foundation is one of his sponsors.

He is completing two engineering degrees and sees his future in motorsport; either driving or engineering. Brenda says she’ll continue to co-drive for him for as long as she can and then, possibly, co-drive for someone else. “It’s the best thing I’ve ever done. It keeps you invigorated.”

AGAINST THE CLOCK
A car rally is a competition of speed against the clock. It is made up of several high-speed “special stages” over public or private, sealed or unsealed roads, which are closed to the public. Drivers and co-drivers attempt to drive the distance in the shortest possible time, and they get time penalties for being late or taking too long to complete maintenance during the race. Rally cars are vastly different to their highway-cruising cousins, with powerful motors designed to give fast pick-up through tight turns. motorsport.org.nz and rallynz.org.nz

More stories you might like:
Flowers, Ink, Pounamu, Stitches: How these four Kiwi women found their creative calling