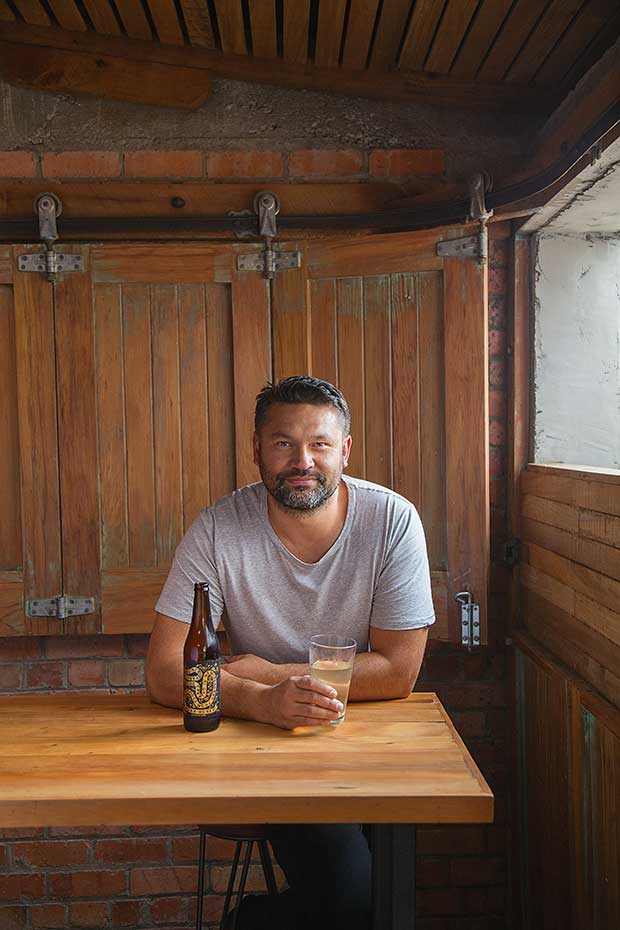 By rejuvenating an ancient tipple, Oren Dalton hopes to breathe new life into our regions.

The animal kingdom brims with everyday examples of enterprise, daring and bravery by creatures great and small. In the world of the humble honey bee, the hero of the narrative is the scout bee which ventures out on its own in search of new sources of food, then returns to the hive to pass the directions onto its mates – through the medium of dance, no less.

This intrepid twinkle-toes is a fitting muse for mead maker Oren Dalton, and the inspiration behind the name of his company, Lone Bee Mead. The Lone Bee’s story is encapsulated on the striking black-and-gold label of each bottle of the fermented-honey beverage, the work of design studio One Design.

“It has connotations of venturing out on your own, leaving the security of the hive – it’s every Kiwi success story,” says Oren. “That lone bee’s efforts have benefited not just itself but also the hive, and I’m trying to make something that’s not only going to better myself, my family and my community, but also everyone else.” Yes, Oren has lofty aspirations. He envisages a mead industry developing in New Zealand to rival the wine industry, with the benefits flowing back into the lower socio-economic communities (such as the Far North, where he grew up) from where the honey is sourced. “If we make the best honey in the world, why can’t we make the best mead in the world?”

More stories you might like:
The cave at the bottom of the Jacob family's Mt Eden garden

Mead is thought to be the world’s oldest alcoholic beverage, having been brewed in Africa, Asia and Europe for thousands of years. In its simplest form, it’s made from fermented honey and water, and can be still or sparkling, served warm or cold.

Its ancient roots may conjure up images of Norse gods and medieval banquets, but mead has made a comeback in recent years, particularly in the United States, where it has become a hipster tipple of choice. 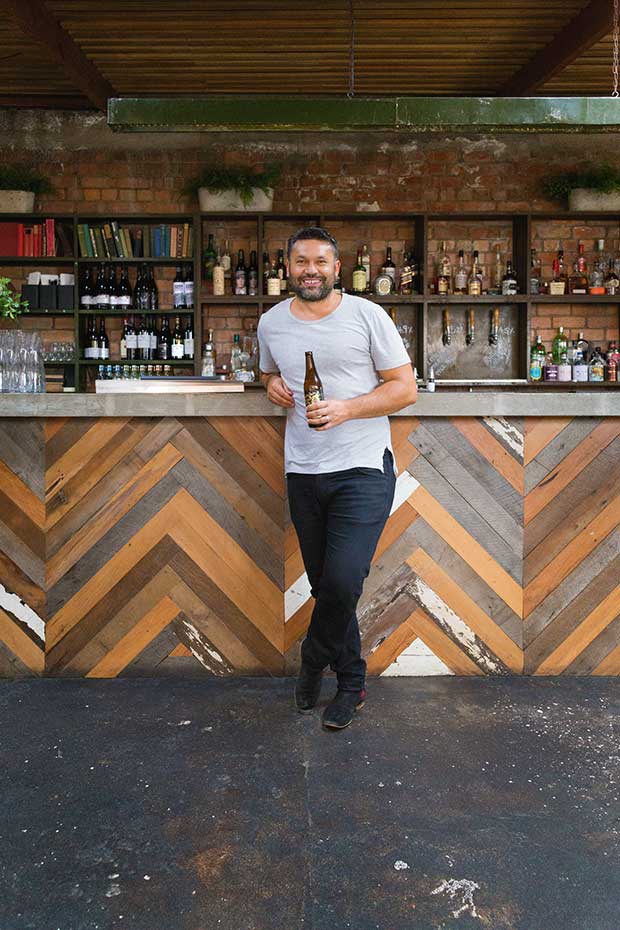 Oren first came across mead the way many of us have, seeing it pop up in historical or fantastical works of fiction. In his case, the introduction came while watching The Vikings when he was growing up, though for others it might be Lord of the Rings or Harry Potter.

Game of Thrones has even been credited for the drink’s resurgence, despite mead never actually being mentioned on the show. (There’s a lot of gulping unidentified grog from goblets, however.)

As an avid home-brewer and a honey fan, Oren decided to try his hand at mead in the basic brewing quarters under his Auckland house. “The first batch turned out pear-shaped but I chipped away at the idea,” explains the 36-year-old.

The recipe for Lone Bee mead was developed nine years ago, and three or four years ago Oren was confident it was good enough for a wider market. “I thought, ‘Do I carry on getting drunk with my mates under the house, or do I give this a nudge?’” 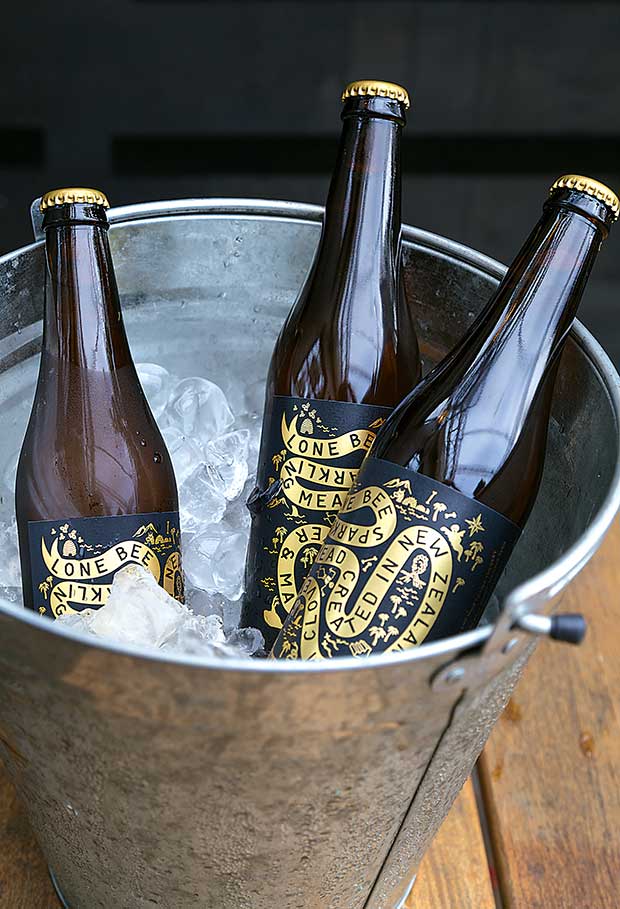 Oren is a banker by day, as well as a father of two, and starting a business on the side has not been without its challenges. “If I had time and money, I’d be doing this full time. It’s all a challenge, to be honest, but passion just steamrolls right through that.”

Two batches have now been commercially brewed to Oren’s recipe by an Auckland contract brewer, using New Zealand clover and mānuka honey. The result is a crisp, dry and refreshing sparkling mead, coming in at a quaffable 5.3 per cent alcohol, which is served at bars across Auckland as well as sold by Farro Fresh, Moore Wilson’s and the Fine Wine Delivery Co.

The honey was sourced from a major supplier to ensure quantity and quality. The goal, however, is to move to small regional suppliers.

“The demand for honey is already high but if we can create the world’s best mead, demand will go up, which means more opportunities and more employment.” Not only that, more bees and more flowers are good for the planet. Oren envisages gorse- and mānuka-covered paddocks and land used for intensive dairying being converted back to bush, which is good news for our waterways. “I’m just after that win-win situation – more honey, more bees, more plants, better for the globe.”

He is currently working on a couple of new mead recipes that showcase single-honey varieties – a pōhutukawa version that “encapsulates that Kiwi summer”, and a mead made from the strongly flavoured kānuka variety. He hopes to launch them at the Taste of Auckland festival in November and is keen to experiment with different herb and spice additions.

“Another goal is to create a more-wintry mead – a stronger version, more like a traditional mead, perhaps adding in citrus or a bit of ginger.”
Oren says the original Lone Bee goes brilliantly with salty food, as well as pork, freshly smoked fish and, of course, anything that features honey.

His vision is for meaderies to pop up in honey areas, serving local food to complement different meads and making the regions a drawcard for tourists and New Zealanders alike. When he’s not sipping his own product, Oren enjoys a beer – a lager if it’s hot and sunny, a stout in the winter, a cream ale or a hoppy craft number. “It really depends on the moment.”

He’s never short of beer or wine at home because when guests pop over and bring a bottle or two, they inevitably end up drinking his mead instead, leaving their unopened offerings behind.