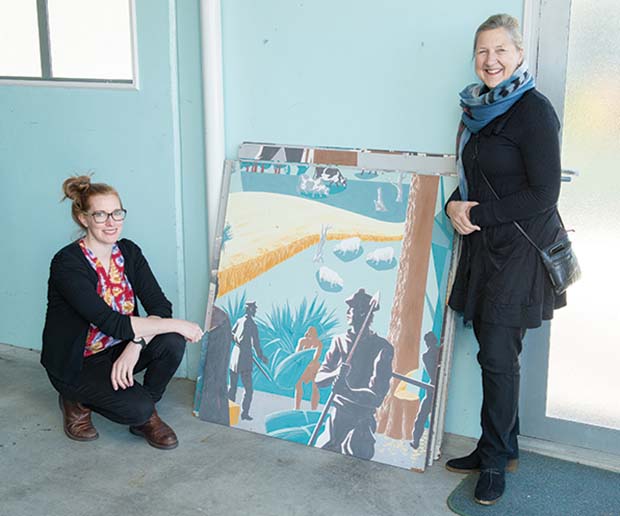 Bronwyn Holloway-Smith and her colleague with pieces of the missing Wairoa mural.

An amateur art-world detective has discovered a dozen important public murals after years of digging.

In 2001, a two-storey painted mural built into Wairoa’s Centennial Library quietly vanished. The mural, one of 12 by an acclaimed New Zealand artist, had been created and installed in the 1960s, and subsequently lost. It may have remained forever missing had a PhD candidate, with a background in fine arts, not stumbled upon a pile of old boxes in Auckland’s disused Commonwealth Pacific Cable Terminal. In those dusty boxes she recognized a mural by E. Mervyn Taylor, a prominent artist in the 50s, and knew the value of what she’d found. Curiously, Bronwyn was in the old cable terminal researching not art but the history and relevance of the Southern Cross Cable (which now carries 98% of our internet traffic). It was her fine arts background that alerted her to the fact that she’d found an important piece of public art. The tiles in those boxes were remains of the painted mural Te-Ika-a-Maui, which had been commissioned by the NZ Post Office in 1962 to mark the terminal’s opening. During her PhD research into the history and relevance of the Southern Cross Cable, Bronwyn worked alongside Mervyn’s granddaughter Sarah Taylor (with advice from Te Papa) to restore Te-Ika-a-Maui.

In the four years that followed, Bronwyn was to uncover 11 further murals by the artist including an enormous work belonging to the Wairoa Library. When she located it, in late 2017 , the mural had been missing for nearly two decades. The cloak and dagger-ish episode, in which the mural was found, a $5000 reward was declined, although the mural’s current location remains a secret. 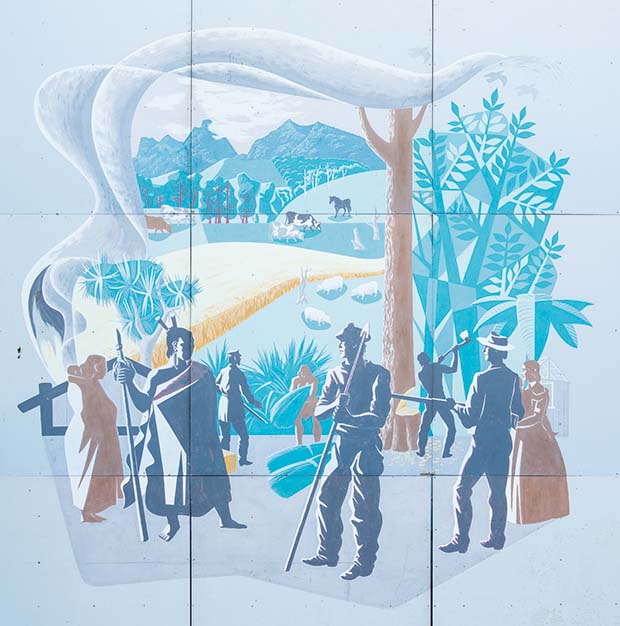 The missing mural from the Wairoa Centennial Library.

E. Mervyn Taylor (Mervyn) was the first art editor of the New Zealand School Journal (1944), and his pictures may be familiar to New Zealanders who learned to read by taking it home in their book bags. Mervyn’s murals are similar in style to his Māori mythology illustrations for School Journal. They are characterized by a Modernist approach of clean lines and bright geometric patterns.

The College of Creative Arts at Massey University’s Wellington campus (previously known as the Wellington Technical College) is where both Mervyn, and later Bronwyn, studied. The university decided to honour the connection and employed Bronwyn as an “art detective” to track down Mervyn’s 11 remaining murals. The investigative work that followed is told in a recently published Wanted – The Search for the Modernist Murals of E. Mervyn Taylor, a book edited by Bronwyn.

Those with a first-hand relationship to the murals were invited to contribute, including Joyce Campbell who wrote the Wairoa chapter.
“I remember the mural in that incidental way in which children take on the visual details of their surroundings, details that seem inherently to belong to them. I chose my books from the featured titles table in front of Taylor’s mural,” writes Joyce.

Bronwyn believed the Wairoa chapter would end without its mural’s discovery. Then one week before Wanted went to print, she received an anonymous phone call from someone who had seen the ‘Wanted’ campaign poster online. She had the mural. The mural on display in Wairoa Centennial Library in 1961.

The Wairoa Centennial Library proudly opened in 1961 with full fanfare and the specially commissioned mural as the centerpiece. At two-storeys high, it depicted a Maori leader with taiaha in hand, meeting four Pākehā colonizers.
In 2001 new building codes identified that the staircase behind the mural failed to meet requirements; the mural was removed to rectify the issue. Bronwyn recounts that a “very upset” woman claiming to be Mervyn’s relative said if the library didn’t reinstate the mural, then she should be allowed to take it. Bronwyn contacted Mervyn’s family in 2016 on her mission to track it down. They knew nothing about the removal. There are no records of it happening. 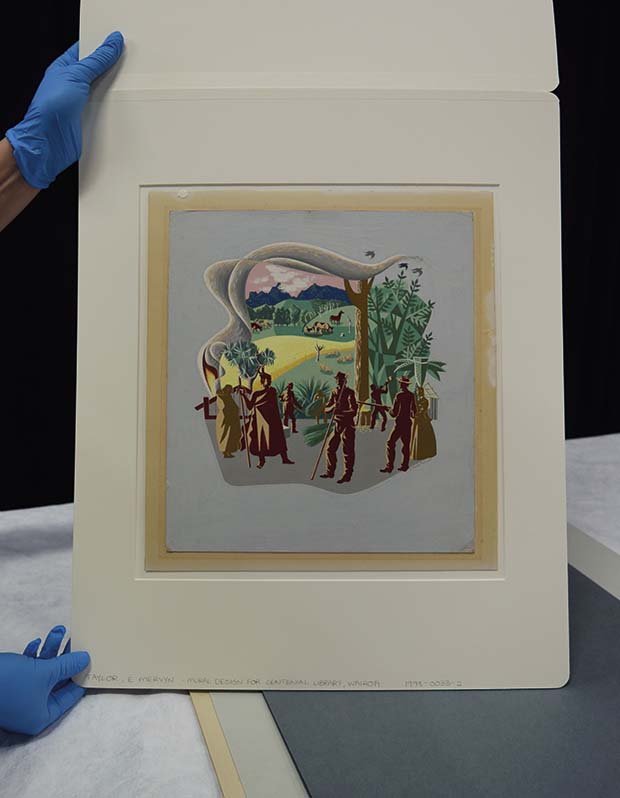 An early design for the mural.

Her team plastered ‘Wanted’ posters all around Wairoa (and online) offering a $5000 reward for information. They continued to work on the book and heard nothing for over a year.
“We had pretty much given up hope of anything turning up.” Due to anonymity conditions, Bronwyn can’t say more about the woman who ultimately phoned to exchange the mural for its reward. But the Wanted team is thrilled to have found it; it is safely in storage awaiting restoration. 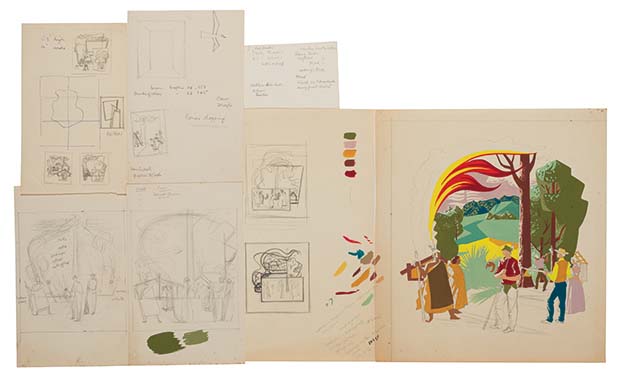 Mervyn’s sketches from 1961 show the planning involved in creating a mural of this scale.

Mervyn’s murals were created for public spaces so as to be accessible to everyone. Ironically, only three of his 12 murals were found intact and in their original locations. “I hope this book will help convince people of the importance of these kinds of works so we can make sure they are protected for future generations,” says Bronwyn. 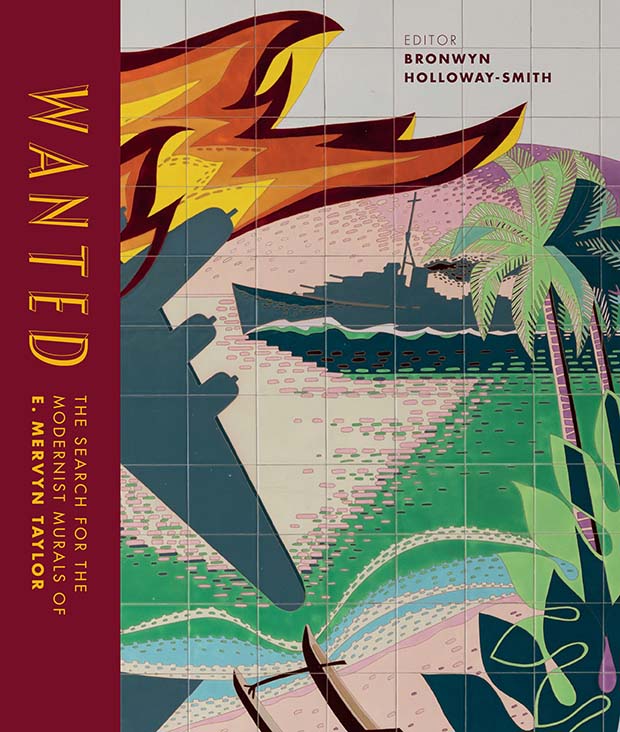