Lucy Corry’s Blog: Egging you on


Chocolate eggs are all very well, but Lucy Corry prefers the real deal.

If you were an egg
And I were an egg
We would have to take such care
We wouldn’t be able to run, or jump
We’d just have to roll everywhere.

Do you know the origins of this verse? My mother used to recite it to me, because her mother used to recite it to her. For all I know, my grandmother wrote it, so if you know where it came from, I’d love to find out. These days I recite this comforting little poem to myself because my nearly teenaged daughter finds me uncool enough without egg-based rhymes coming into the equation.

To be fair to her, if I started declaiming it every time I opened an egg carton I’d never shut up. Eggs save our family from hunger and hanger on a regular basis. Even the dog loves them (yolks only, though). As I write this, my husband is planning to fry some eggs for our dinner tonight. They’ll be served on top of a melange of reheated leftover potatoes, carrots and mushrooms that we ate last night with roasted chicken legs (the chicken came first, in this instance).

The shells will satisfyingly crunch down in the compost and the carton, once empty, will be returned to the egg stall at the Harbourside Market. I’m ever hopeful that doing this will mean the woman I buy eggs from will crack under my relentless charm offensive. Alas, so far she remains steadfastly impassive, her face as expressionless as her excellent eggs. When I was a child, fried eggs were for breakfast only. Dad would cook them until the whites were opaque on top and crunchy golden lace underneath. Or we’d have boiled eggs filled with molten rivers of saffron-coloured lava. Babies (or anyone who needed a bit of coddling) were fed Baby Egg; a sort of deconstructed soft boiled egg scooped into a bowl with little cubes of toast instead of soldiers.

When I included a recipe for Baby Egg in Homecooked, lots of people lit upon it with heartfelt nostalgia and told me their mothers or grandmothers had fed them the same thing. When I was working in London, my workmates would often go to a nearby greasy spoon for a decadent lunch of fried eggs and chips. Such a feast was usually followed by mugs of Yorkshire Tea back in the office and PR-sent chocolate.

In the age of remote working and at-home lunching, I’d be very unlikely to conjure myself up egg ‘n chips for lunch, but I do have a DIY fried egg occasionally. I use the foolproof method described by the late American writer MFK Fisher. 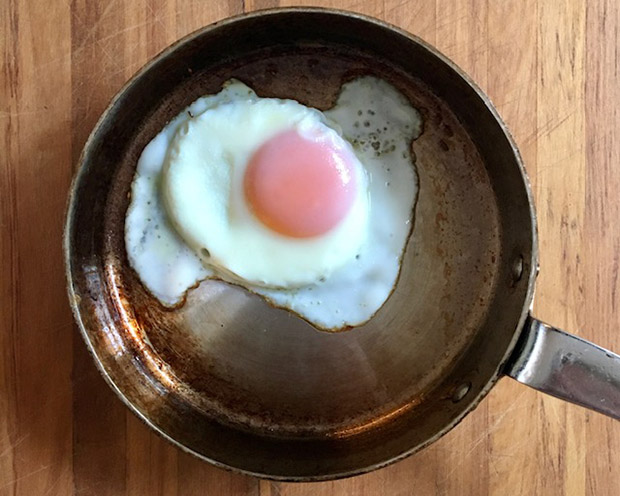 All you need to do is heat a little knob of butter and a drop of oil in a shallow pan, then break in a room temperature egg (or two). At that point, you clamp a lid on the pan, turn off the heat and leave the egg undisturbed for three minutes (this is a good chance to make a piece of toast or return an email or – for the true multi-tasker – both of these things).

Then you slide the egg onto the buttered toast, anoint it with some spicy sauce or a good shower of salt and pepper, and enjoy the absolute pleasure of bursting a perfectly cooked yolk. Even better is to eat the holy combination of fried eggs, spiced rice and tahini-laced yoghurt at Wellington’s Field & Green. Poached eggs, be damned! As for Shakespeare, well, I’m not sure he was one for any kind of egg, fried or otherwise. In The Merry Wives of Windsor, Falstaff rejects the offer of eggs, dismissing them as “pullet-sperm” (a description potent enough to put anyone off their breakfast).

In Macbeth, one of Macbeth’s hired henchmen calls Macduff’s young son “an egg” before stabbing him to death and heaping salt on the wound by calling him the “young fry of treachery”. I’ll take my grandmother’s poem over that, any day of the week.