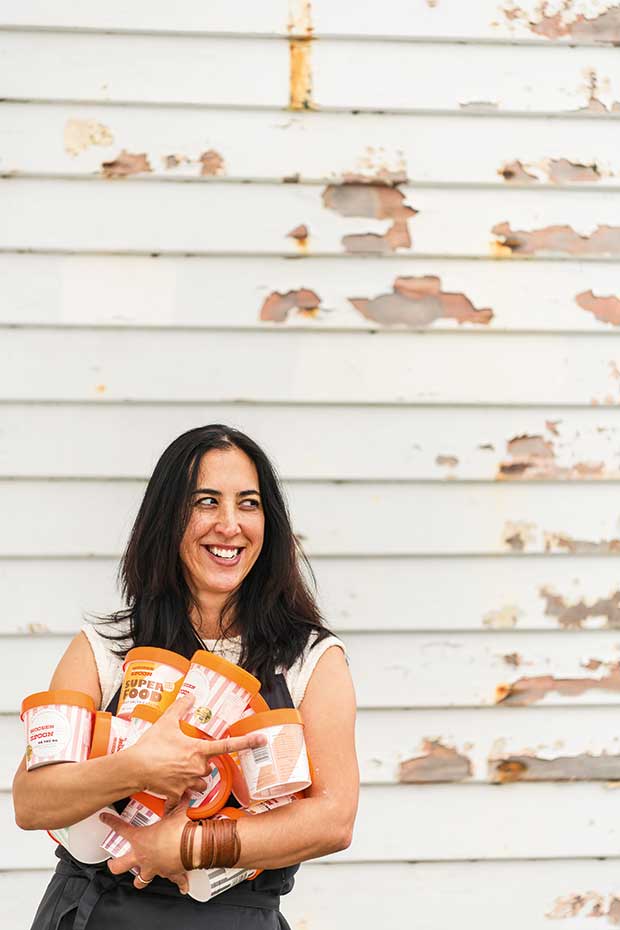 A scoopful of fun is included in every tub made by these award-winning, boutique ice-cream makers.

In search of the ultimate superfood? Look no further than the freezer cabinet. There, in an array of candy-striped tubs with vibrant orange lids, lies the secret to instant happiness. At least, that’s how Sharon Galeon sees it.

“Ice cream is happy food,” says the co-founder of Wellington craft ice-cream company Wooden Spoon Freezery. “No other food is as emotional and positive and happy. It cheers you up when you’re sad, and it helps you when you’re stressed. It connects you with your childhood. That’s why it’s so powerful.”

Of course, as the makers of multi-award-winning artisanal ice cream, Sharon and her business partner Midori Willoughby have a lot to be happy for.

The company they started by accident in 2012 has grown into a thriving business that combines attention to detail with a generous scoop of fun. Midori and Sharon came up with the Birthday Cake flavour as a way of supporting food-rescue organizaton Kaibosh.

“We have to love every flavour we put out,” Midori says. “The ice-cream we make is rooted in our childhood and new experiences from our travels, but the flavours we create are accessible to everyone.”

Ice cream brought the pair together. Both had moved to Wellington from the United States — Sharon from Los Angeles in 2009, Midori from the San Francisco Bay area in 2010. Thrown together at social gatherings, they were surprised to find they had a common bond.

“It was unusual because we were both making ice cream as our go-to dish for dinner parties,” Midori says. “We started talking about the flavours we missed from the States. I guess we became friends because of ice-cream.” 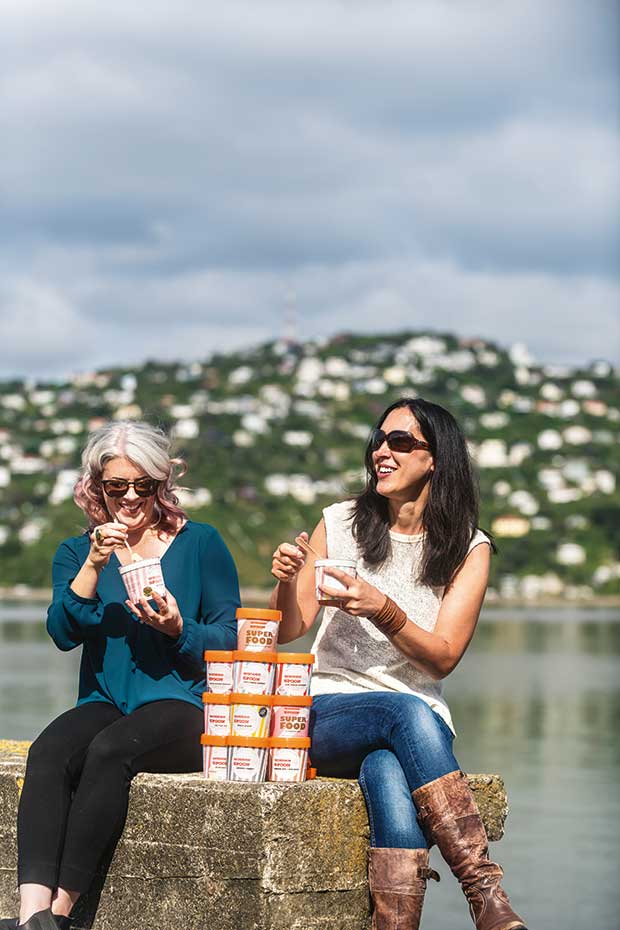 “We have these shared cultural touchstones,” Sharon says. “I’ve never met anyone who has a more similar taste profile to me than Midori, down to the most garbage junk food. We have chemistry.

“Midori swears she doesn’t remember this, but after we’d been hanging out for a while, I was at her house one day and she said, ‘I have this idea about ice-cream, are you in?’”

Midori says she’s the more conservative of the two, but her idea was ambitious. She wanted to run a craft ice-cream “membership service” where each month they would create two new flavours and hand-deliver them to members.

“We thought, ‘OK, we have a little home machine each, and we have a whole lot of ideas. Let’s make a couple of pints and see if anyone’s interested,’” she says. Their ice-creams — made from organic Zany Zeus milk and cream and then including flavours like earl grey, anzac biscuit and chocolate and sea salt — quickly developed a cult following. By mid-2012, Midori and Sharon found themselves delivering their products all over Wellington.

“It just caught on,” Sharon says. “I don’t even really remember how it happened. We would make ice cream on weekend nights and then drive around the city with headlamps on. It was crazy, but it was fun.” “We might have been naive, but it was easy,” Sharon says. “We just rocked up to people and said, ‘Can we make some ice cream with whatever it is that you make, and we’ll give you some?’ Everyone was really into it.”

Things moved up a gear in 2013 when iconic Wellington food emporium Moore Wilson came calling. “That changed a lot of things,” Midori says. “It was a complete learning experience because neither of us had any real experience with food. I had produced a documentary series back in the States, and Sharon was an information architect and graphic designer. I was really passionate about eating ice cream, but I’d never thought I’d end up making it full time.”

Before long, Wooden Spoon Freezery tubs were also appearing in New World supermarkets in Thorndon and Chaffers Street, then Farro Fresh in Auckland.

“By the time we hit our fourth or fifth store we just looked at each other and thought, ‘What are we doing here?’” Sharon says. “Are we just playing at this or are we creating a real business?’” 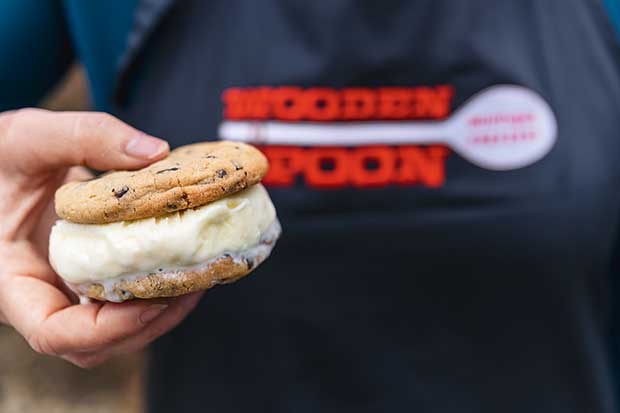 Regretfully, they realized the membership wasn’t sustainable and they phased it out. “We couldn’t manage to come up with two unique flavours every month for the members and supply the stores as well,” Midori says. “We were sad about it, because we loved having that connection with our members and they helped shape what our business is today.”

Wooden Spoon Freezery ice-creams — with nine regular flavours, ice-cream sandwiches, a host of limited-edition flavours and a new range of non-dairy “nice creams” — are now found throughout New Zealand, but Midori and Sharon insist the business is still true to its roots.

They’re still hands-on in their premises in Wellington’s Shelly Bay, with Midori focusing on “the back end” and Sharon on production. They develop ideas and strategy together.

“We’re still a small-batch creamery, and we still do nearly everything ourselves,” Midori says. “We are really different, but that’s what makes it work.”

They’ve maintained close relationships with their customers via Wooden Spoon Labs, where people can sign up to take part in user-testing (“people are very enthusiastic about free ice-cream,” Sharon says).

The collaborations have continued — Chocolate Covered Banana (a silver medal winner in the 2018 Outstanding Food Producer Awards) is made with All Good Bananas, and two Wooden Spoon ice-creams contain Fix & Fogg peanut butter.

One of the couple’s latest limited-edition flavours, Blackcurrant Crunch, is a team effort between Wooden Spoon, Viberi blackcurrants and a Young Enterprise Scheme team from Dunedin Girls’ High School. A portion of the proceeds from the sales of Blackcurrant Crunch will go to KiwiHarvest, which collects food before it goes to waste and distributes it to families in need. Blackcurrant Crunch was the Supreme Champion of the 2019 Outstanding NZ Food Producer Awards. While Sharon and Midori share a love for many of the same foods and flavours, they’ve learned to adapt and change some of their ideas to suit the New Zealand palate. “We grew up with some iconic American flavours that do not resonate here,” Sharon says.

More stories you might like:
From tragedy to red hot business: how Jen Viegas found success recreating the flavours of her heritage

“We love all kinds of cherry ice cream. Kiwis absolutely do not love cherry ice-cream. That was a big one to get over. We riff on flavours all the time, but not all of them translate.”

They initially resisted pleas to create a hokey pokey ice cream, concerned that they wouldn’t do it justice, but eventually gave in and made Smokey Pokey. This “black sheep cousin” of the New Zealand favourite is a rich, sea-salted caramel with pieces of chocolate-covered hokey pokey.

“It took a while for us to embrace it personally,” Midori says. “I didn’t get it for a long time, but I can’t imagine not having it now.” One flavour that comes directly from their childhoods has been a smash hit. Movie Night — a buttered-popcorn ice cream with caramel-corn brittle that won gold at the 2017 Outstanding Food Producer Awards — is now one of their biggest sellers.

“We were talking about Cracker Jacks, which is this mix of caramel-coated popcorn and candied peanuts that comes in a little box with a toy in the bottom and wondering how we could make a flavour that was reminiscent of it,” Sharon says. “It took such a long time to get it right. I remember finally getting the brittle right one day and calling Midori because I was so excited.”

In 2018 they launched the SuperFood range, their first non-dairy, vegan, gluten-free ice “creams” that use house-made cashew milk as a base. That constant drive to get things just right — “there’s no sacrificing good in pursuit of perfect” — stood them in good stead. “We had so many failures, and there were many moments when we had to bolster each other,” Sharon says. “When you make ice cream with dairy products, you know how it’s going to turn out. With cashews we were forging our own path, but we wanted something that dairy and non-dairy ice-cream eaters could share and enjoy.

“We want our flavours to be unique and exciting, but they’re not there to shock people. We put a lot of care into our ice creams, and everything is very high quality, but they’re always going to be fun. We know something is successful when we realize we both can’t stop eating it or talking about it. Everything we do has to tick all the boxes, or it doesn’t go out.”