Lucy Corry’s Blog: Kitchens I have known (and loved)


Lucy has seen her fair share of kitchens, some more a cupboard than culinary hub. As she prepares to move house, she reflects on the diverse range of kitchens she has cooked in over the years.

Kitchen designers often talk about work flow or ‘the triangle’ to refer to the principles of user-friendly design. A good kitchen, the experts say, should enable people to move efficiently from one task to the next. This is true, but I’ve seldom had the pleasure of living in a house where much thought has gone into the kitchen layout.

I’ve been thinking a lot about kitchen design lately because I’m moving house. This new kitchen, in which I’ve spent a total of about five minutes, will be number 20 in a motley line-up of kitchens that I’ve occupied since I left home. These kitchens have ranged from the sublime (the one owned by a chef with a $50,000 oven) to the ridiculous (the cramped corner of a one-room hovel on a Greek island).

I’m excited about moving, but I’m also a little nervous.

The current owner is a man with a strict ‘no clutter on the benchtop’ policy and the appliances all look suspiciously untouched. I’ve had a lifetime of cooking in kitchens where the key design principle has been ‘making do’. What if this new kitchen, which bears all the hallmarks of being ‘designed’, doesn’t work like I want it to? Lucy is about to say goodbye to her current kitchen, pictured here.

Perhaps my expectations are too high. I grew up in a house where the kitchen was where everything happened (as if the 1970s wallpaper didn’t make the room busy enough). It was designed so the person standing at the kitchen sink could gaze over the dining table to the distant ‘v’ of Mount Tarawera, or turn their head to the left and watch sheep grazing on the neighbours’ paddock.

By contrast, the kitchen in my first flat was little bigger than a cupboard. I don’t recall a view, but there were frequent sightings of livestock (mice). That kitchen was so small that the fridge was in the adjacent lounge (a dim, windowless room which could conveniently be heated by leaving the oven door ajar). Neither the grotty surroundings nor our lack of money, culinary expertise or dining table prevented us from throwing an ambitious dinner party prepared in that kitchen, with wild venison, chocolate cake and copious amounts of red wine.

From there I moved to similarly grunge-y kitchens all around Wellington’s inner-city suburbs. Their curling lino, unreliable ovens and general lack of ambience didn’t stop me or most of my housemates from spending a lot of time in them. Everyone did. Anyone who avoided the kitchen was someone you couldn’t necessarily trust. Those who passive-aggressively wrote their names on the food they bought were even worse. Even as a cash-strapped student and beginner journalist, I knew a kitchen was the beating heart of a home. That’s certainly the case in my current house, even though the kitchen itself is a peculiar hybrid of 1930s original features and 1980s joinery. There is no triangle of efficiency in this galley kitchen, where the oven door is held on with an elastic hair tie and borer are deftly chewing through the china cabinet.

To cook in this kitchen and have guests requires a combination of deft footwork and hands-on bossiness; invariably people want to be in the exact flight path between fridge, oven and sink and the cook has to either weave between them or shove them out of the way. Either way, visitors never seem to mind. Perhaps it’s an innate human need to be in a confined space, close to the fire and the dancing knives. 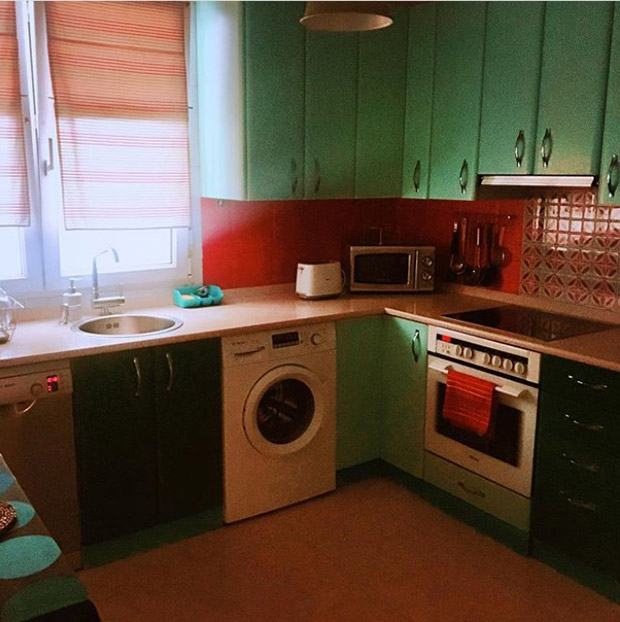 Lucy enjoyed the kitchen at a Bilbao home she stayed in last year – probably the prettiest and best equipped of the bunch.

I’ve always wondered what happens in those houses you see on TV, where the action station is hidden away from the show kitchen. I bet my best carving knife that these scullerys are where everyone really wants to be, having deep and meaningful conversations while they pick over the leftovers.

So when I worry that the open-plan design of my new kitchen means that dirty dishes and cooking detritus will always be on show, I reassure myself that there will simply be a greater area for people to gather. The tight two-step between fridge, sink and guest can expand into something more generous, with plenty of space for people to lean against the benchtop and chat while I scrub the potatoes or toss the salad.

Surely that’s what good kitchen design is all about.