A posh poodle learns to embrace the wild, carefree outdoors in an extended stay with Polly.

The poodle was an apartment pet. White as snow, soft as duck-down, clipped and groomed, he came to our forest at his parent’s request.

Ziggy knew life’s plush path had gone astray; veering from carpet to proverbial gravel as soon as he arrived. Refusing to exit the car, he whimpered for home like a coddled child sent to boot-camp as the enthusiastic kids attempted to lever him off the backseat.

He’d come for the month. Our friends had asked if we’d mind. They were going away and their dog-sitter plans had fallen through at the eleventh hour. 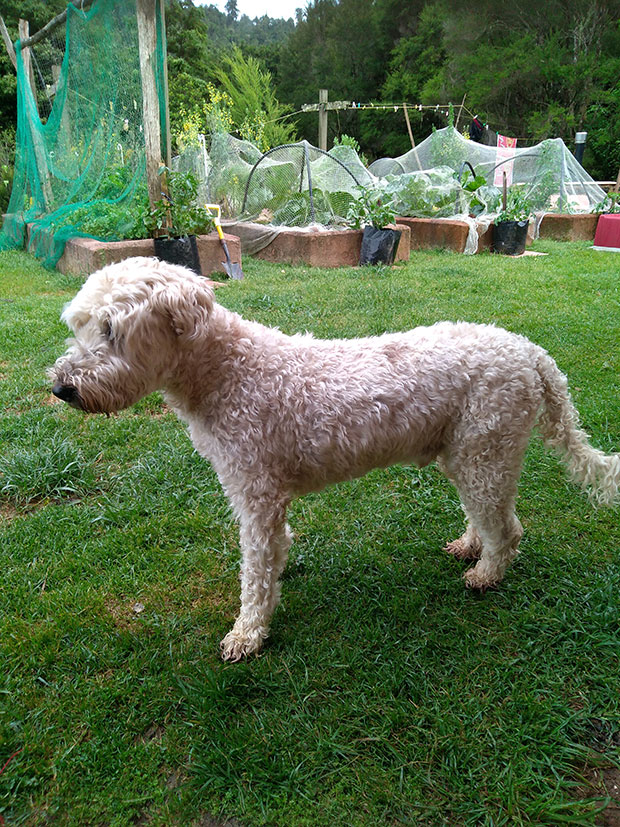 Ziggy arrived to the Far-North with a designer food bowl and a smart little jacket.

There’s no delicate way to put it. Our dog Pax can be brutally aggressive to other dogs. His youth was a different story. Enthusiastically amorous, there was nothing he wouldn’t attempt to mate but then he was ripped apart in a dog attack and the viciousness must’ve been contagious. Here’s the thing, I cautioned our friends; Pax punctures when he bites.

As well; there are the kiwis. Routinely wandering our lawn at night, they call so shrilly it blasts through my 2am dreams. While we shut our dog indoors from dusk till dawn to keep the breeding birds safe, we know Pax doesn’t wander into the bush and cause harm during the day.

“Ziggy won’t either,” our friends replied. “All he’s interested in are rubbish bags. And he’s very passive. He’ll be fine with your dog.” Missing the veiled warning about garbage, we arranged to collect the poodle and bring him home.

He came loaded with food and accessories, including a quilted bed, matching cushion and a smart little jacket.

Pax noisily asserted his dominance in a ferocious display of growls and snapping teeth. The children cried and screamed. So did Ziggy. Banished to his kennel, our dog glowered as five-year-old Zendo and eight-year-old Vita ostentatiously switched allegiance to the smaller, cuter canine.

“I really hate you,” Vita told our family pet.

Cossetted and cuddled, Ziggy allowed himself to be manipulated into his jacket. He dined delicately from a special designer dinner bowl, eating biscuits made from emu oil mixed with his gluten-free tinned gloop. Then he retired to his bed, crying softly about goodness-knows-what while the fawning kids tucked him in and did their utmost to comfort him.

Pax’s eyes burned through the glass kitchen door. I got the distinct impression he was feeling short-changed. He doesn’t get dinner, consigned to once-a-day rations following an unkind observation of his barrel-like girth. Nor does he have a dinner bowl. He used to, but what’s the point when he snatches his dog-roll before it’s even hit the ground? When it’s cold in winter, he’s always just grown thicker fur.

“We still love you,” I mouthed guiltily through the window but my attention was diverted by the poodle whining beseechingly. Pax bristled like a jealous child usurped from the family bosom as I cooed at our new arrival. When we escorted our brown dog indoors to bed, he tried to remove Ziggy’s little nose.

“Bad dog,” we scolded in unison.

The tide began turning the next morning. Let out from his bed, Ziggy rushed outside to pee all over my oregano patch; then he pooped on the lawn. In four separate places. It was my turn to feel resentful. 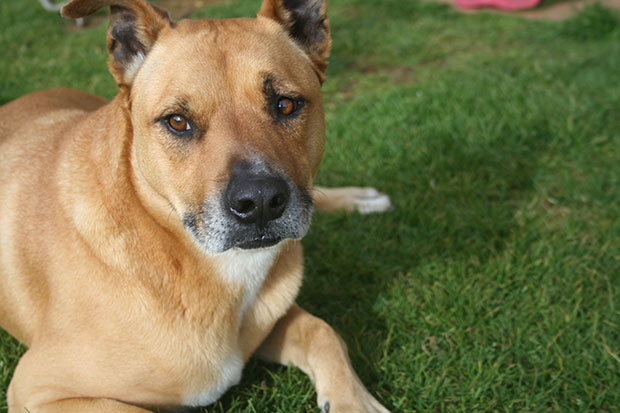 Unlike the posh poodle, Pax has no need for a dinner bowl.

“Who does he think he is,” I muttered, trying to balance it all on the shovel. Our dog is discrete in his toileting and would never dream of leaving his shit for us to deal with.

During the day, Pax is an outside dog. Ziggy was shocked to discover he was now too. Outraged, he flailed his limbs at the shut door and howled. When that didn’t work, he cried piteously. The fifth poo he delivered seemed spitefully placed on the garden path.

When we took him on a walk to the other side of our valley, he missed the turn-off and trotted away down the hill. He bared snarling teeth at the kids when they tried to steer him back. Shaken, they announced they’d like to keep Pax after all.

Even when he was back at the house, Ziggy continued to go downhill in our affections. Defecating across the lawn with the frequency of a new-born, he whined incessantly, trying to sneak inside whenever he could.

By day four he was starting to accept this truth. He didn’t whimper nearly as much. By day five he’d decided to embrace it. He and Pax bonded as they shouted together at the wind. Ziggy rolled in mud, turning his white fluff a practical brown. He scorned his dog-treats; special toothbrush-shaped biscuits designed to clean his teeth as he gnawed instead on hand-me-down bones scrounged from Pax’s hoard.

Then he did the unspeakable. Following his nose to the remains of a recently butchered sheep, he pulled it from the ground. I’m guessing he rolled ecstatically in its stench and chewed experimentally on the fleece. I know for certain he carried the rotting skull up to the house like a trophy and sneaked inside to vomit sheep’s wool and foulness onto the floor. When I chased him, he thought it was a wonderful game. Then he fled as I roared.

Pax wagged his tail admiringly as he watched through the window, before confiscating the skull at the door. Every time I hurled it far away, someone retrieved it. The stinking dogs took turns crunching through the eye sockets. Like a dirty old man sporting food in his beard, Ziggy’s mouth hair grew grimy with decomposing brains. I think he was grinning.

Since then he’s been through the rubbish and compost. Looking less pampered pooch and more matted mutt, there’s a spring in his step as he trots about. Yesterday he brought his chest low to the ground in an invitation to Pax. Our dog sprang joyfully forward, immediately understanding the meaning of the play-bow.

Unfortunately, however, Ziggy seems impervious to transformation regarding his toileting. If he’d just get some dignity there and ditch his sense of entitlement to our lounge, I might even miss him a little when he goes.