Before there was Tinder, American psychology professor Arthur Aron formulated a list of 36 questions to help strangers fall in love (or, in psych speak, A Practical Methodology for The Experimental Generation of Interpersonal Closeness).

Professor Aron’s handy conversational checklist aimed to accelerate intimacy by eliminating the awkwardness of first-date small talk. His 36 questions began innocuously – who is your dream dinner guest? describe your perfect day – before delving into best and worst memories, most significant accomplishment, what makes someone blush, the value placed on friendship and how well a person gets on with their mother.

Google the full list, and I guarantee an enjoyable evening with your partner, provided the lovey-dovey chit-chat doesn’t unwittingly stray into more contentious territory, such as sex, money, parenting, politics and free-range chooks. When my husband Jason and I exchanged wedding vows, neither of us promised to love, honour or obey each other’s pets. But in the decade since, chickens have undermined our union more than all of our other animals, including my demented (and incontinent) dearly departed cats. Jason already had chooks when I met him, so I assumed he enjoyed their company. I assumed wrong. He only enjoyed their eggs, and he prefers to get those at the supermarket in nice clean cartons. Buying eggs is cheaper, he reckons, and causes fewer fights.

He’s right. Keeping chooks, with their feast-or-famine laying habits, is a costly conundrum. In winter, when our chooks are off the lay, we buy eggs and 20kg bags of Chook Chow. In summer, there’s no need for supplementary feed – they effectively compost our kitchen scraps and most of my garden green waste – but we don’t need 56 eggs a week either.

I keep two flocks of chooks: one pretty, one productive. Although our half-dozen hylines and brown shavers are the best layers, each reliably producing an egg a day, they’re not particularly photogenic and they’re hard to tell apart. Lynda stores her chooks’ food in this vintage tin from Arkwrights Antiques in Paeroa.

Last spring, I decided to lift my poultry-keeping standards and asked our friends Brad and Leigh, who own heirloom breed hens, to incubate a clutch of fertile eggs for me. I wanted some poseur pullets – mottled anconas, silver-spangled araucanas, fluffy orpingtons and regal sussexes – to populate my social media feeds.

My original intention was to name my new hens after my favourite omelette herbs: parsley, sage, rosemary, fennel, coriander, chervil, oregano, tarragon, and thyme. But before I’d settled on who was who in my herbes de provence, four of the nine grew wobbly chins and started crowing. One of those teenage cockerels – a supercilious silver fox with fluffy earmuffs and a cantankerous constitution – kept attacking my sons. They christened him Savage, then went on to name Mutant (an araucana with sassy sideburns and freaky six-toed feet) and Humpback (a busty orpington).

Having learned the hard way that hawks are partial to organic poussin, we locked up our posh flock in a second-hand dog run on the lawn until they were large enough to safely liberate. And that’s when the problems began, for free-range chickens are a nuisance at the best of times, whereas friendly hand-reared free-rangers are a nuisance at all times. A wild west saloon isn’t complete without a pint-sized show pony tied to the front porch, so Lynda’s neighbour Kate loaned her Keith, the miniature horse. Was he named after the Rolling Stone or Nicole Kidman’s long-maned husband?

They lack boundaries. Not content with nibbling the aphids off my roses and stuffing their beaks with organic escargot, they repaid my trust by obliterating my herb garden, uprooting my salad greens, breaking into our house to steal the dog biscuits and defecating all over our new deck.

Things came to a head during the lockdown when my husband was forced to work from home and the chooks took to roosting outside his office in the stables, leaving a pile of crap on his doormat every morning.

Take multiple landmines of chook manure, a global pandemic and a grumbling husband with too much time on his hands – and what do you get? Sufficient motivation for my man to build me a plush poultry pied-à-terre. 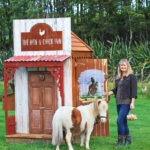 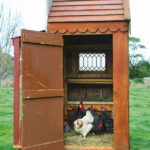 Her plywood pet-lamb shelter was repurposed for the roof and walls; she pinched the door from the ground floor of her children’s cobwebbed treehouse; dusted off a stained-glass window from her haybarn; and weighted down the nesting box lid with a cast-iron rooster she found at the annual Alberton Vintage Market Day. 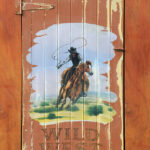 Lynda’s husband salvaged the side door and native timber planks for the façade during the demolition of the Freemasons Lodge in Papakura, and she pimped up the door with a cowboy-themed peel-and-stick décor transfer (‘Wild West’ in the Redesign transfer range from zeldasdaughter.co.nz). 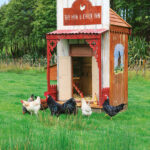 The only new feature is the “Hen and Chick Inn” corten-steel sign, which was laser-cut by Gary Bright at Bright Manufacturing in Patumahoe. To make it look old, Lynda left it out in the rain all winter to rust.

If my husband had his way, our new henitentiary would have been modeled on Alcatraz or the Hanoi Hilton, with barbed-wire perimeter fencing and zero tolerance for flight risks. Instead, we created a bougie boudoir with a frontier-town façade inspired by the likes of the Brian Boru Hotel in Thames, the Moutere Inn, the Whangamomona Hotel or Big Nose Kate’s Saloon in Tombstone, Arizona.

Just two years – and a lifetime – ago, we were tiki-touring around Arizona on a family holiday, reenacting the gunfight at the O.K. Corral, me dressed as a busty barmaid and the kids as gun-toting cowboys, watching out for rattlesnakes in the Superstition Mountains, and visiting art exhibitions in Scottsdale, where legendary architect Frank Lloyd Wright made his winter home. Here’s a fun fact about the Fallingwater architect: he had a soft spot for chooks. On his family farm a few states over in Wisconsin, Wright built a three-storey barn complete with grain silos, stables and a hen house cantilevered over the driveway.

Midway Barn is now designated a National Historic Landmark; another of Wright’s chicken coops on the same estate was converted into a slightly whiffy student dormitory.

Not only did Wright keep chooks, he famously told his architecture students they should regard it as just as desirable to build a chicken house as to build a cathedral. What counts in art, he reckoned, was the quality of character – and “character may be large in the little or little in the large”. 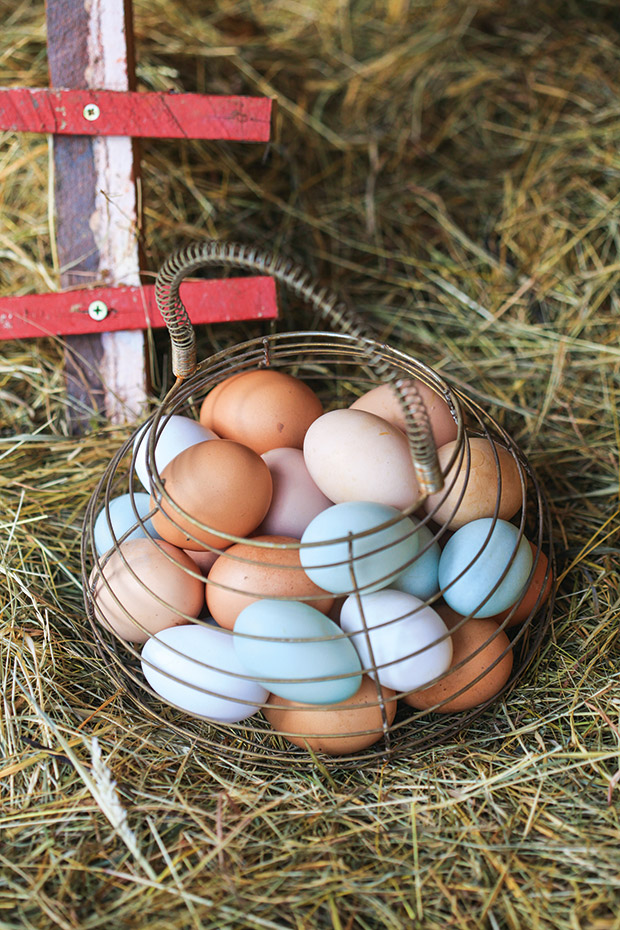 One can’t make an omelette — or a frothy-headed cocktail — without breaking a few eggs and this Christmas, I’ll crack a fair number of our free-range eggs into pavlova, raspberry-ripple meringues, ice cream and brandy custard for the Christmas pud.

I could serve eggnog too, but I’d rather spoon egg white into my cocktail shaker for a round of damson gimlets.

To make, start with a generous festive splosh of sweet ruby red damson gin (if you don’t make your own, the Damson Collection’s Damson Plum Liqueur is the next best thing), add the juice of a lime (or a nip of Rose’s Lime Cordial) and 1 tablespoon of egg white.