On summer holidays, something kooky happens to the concept of time. It unspools like a runaway cotton reel or the end of a child’s fishing line that some fool forgot to knot. It loses track of itself, especially in the mornings and the afternoons and the evenings, causing the days to roll into each other until no one can remember if it’s Monday or Sunday or any of the days in between.

I’ve just spent four weeks in Tairua with my kids and I swear that, when we’re all at the beach, time regenerates like sunburned skin or a frozen Sara Lee Danish dessert (“layer upon layer upon layer”). The days inch imperceptibly longer, outlasting ice creams and bottles of sunscreen and a parent’s patience for sibling spats over sticks, stones, sandcastles and Hot Water Beach spades. 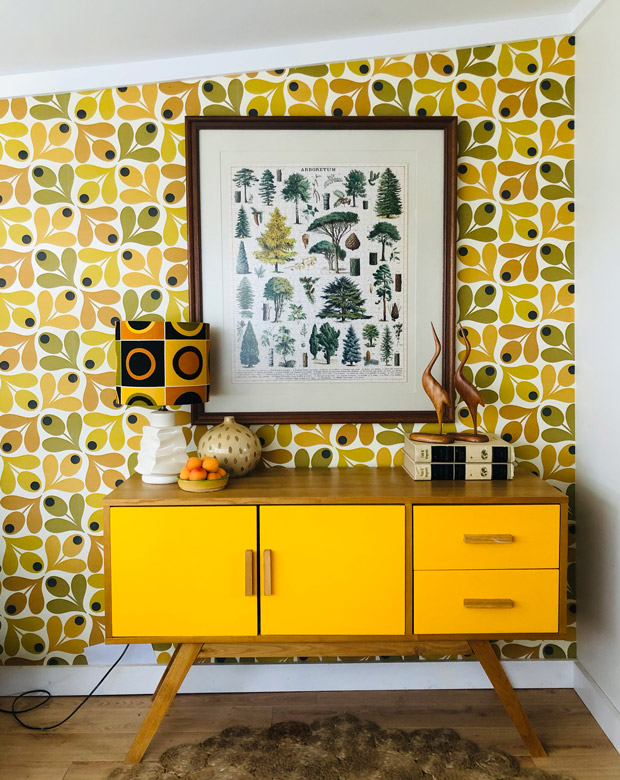 Lynda couldn’t bear to break up her Cavallini & Co Vintage Arboretum Puzzle, so she framed it and hung it on her bach wall.

At the end of each weekend, from our bach on Tairua’s main drag, I’d witness time visibly slowing to a crawl for a conga line of cranky Aucklanders stuck in a bottleneck on the exodus back to the big smoke. (Tairua, an otherwise chill Coromandel township, is bookended by a pair of one-way bridges that fuel an annual and largely unsympathetic controversy on the local Facebook ChitChat page about traffic congestion.)

As we sat at our kitchen table and watched the cars come and go, ten at a time, we slotted together 1000-piece jigsaw puzzles and wondered why it was only in summer – or during a pandemic lockdown – that we found time to squander doing puzzles or playing cards or perfecting the passionfruit mojito. Lynda’s son’s op shop solar-powered owl couldn’t give two hoots about how long it might take to assemble this round puzzle by Kiwi designer Phlox. (Hint: it took a very, very long time.)

In the early days of the pandemic last year, the Polish writer Olga Tokarczuk, author of Drive Your Plow Over the Bones of the Dead, wrote a poignant lockdown essay that was translated for The New Yorker. “For the longest time, I have felt that there’s been too much world. Too much, too fast, too loud,” she wrote. “Images from my childhood keep coming back to me. There was so much more time then, and it was possible to “waste” it and “kill” it, spending hours just staring out the window, observing the ants, or lying under the table and imagining it to be the ark.

“Might it not be the case that we have returned to a normal rhythm of life? That it isn’t that the virus is a disruption of the norm, but rather exactly the reverse – that the hectic world before the virus arrived was abnormal?”

I feel this way every summer. Only in summer do I find time to “waste” playing 500 with my parents, or last card with my children. Only in summer do I “kill” hours methodically assembling jigsaw puzzles, piece by piece, only to pull them apart and put them back into their boxes as soon as they are completed. This is an exercise in both futility and mindfulness, as satisfying as it is pointless, so this year I PVA-glued the finished puzzles together and framed them in cheap frames from the local secondhand store instead. 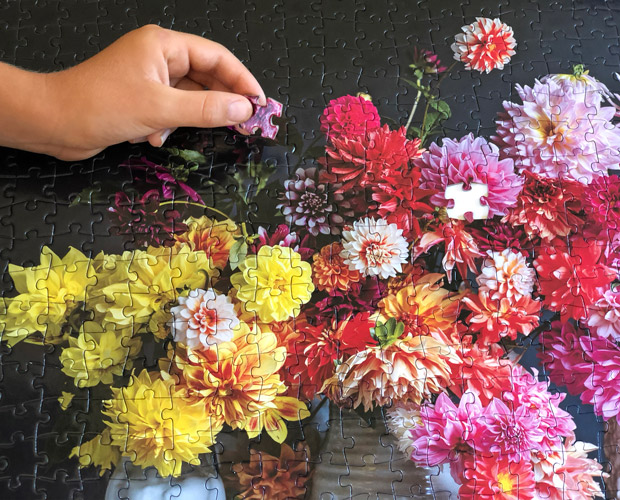 The definition of summer satisfaction: finding the last piece of a puzzle.

This summer, I also learned that jigsaw puzzles are really personality tests, designed to sort the intuitionists from the engineers. While my husband pays no heed to the picture on the box, searching by shape alone, I tend to obsess over one colour or design element at a time. Mum, meanwhile, has a knack for finding that rogue piece you’ve been searching for all night. (More often than not, it was stuck to the underside of her forearm.)

My friend Deanna, however, proved to be a puzzle perfectionist. She’s the one who – spoiler alert – figured out that the back of the all-black background of our fancy 750-piece Frances Palmer Dahlias art puzzle had a purple pattern printed onto it (it’s actually the famous American studio potter’s logo). Without that cheat’s trick, I’d still be sitting there randomly shoving innies into outies and hoping for the best.

While Deanna and I patiently knocked off the Frances Palmer, our children grew bored and buggered off to the church op shop next door, returning with a frankly perplexing vintage Philmar puzzle, of a Tudor-style Foxhunter Inn, that cost them $2. This elegant puzzle, featuring vases of dahlias handcrafted by American studio potter Frances Palmer, looks as good on the wall as it does on the box. From puririlane.co.nz

Now puzzle pieces are generally sorted by their loops and sockets, or knobs and holes, but that ye-olde-English pub was constructed from 399 of the most irregular puzzle pieces I’ve ever encountered. They fit together with all the logic and consistency of a packet of melted gummy bears.

As for the 400th piece? We can only assume it fell down the cracks in our back deck because, while we all were fruitlessly hunting for it, the 399th piece met a similar fate.

I’d like to say that the Foxhunter Inn puzzle was my son Lucas’ most irritating op shop purchase this summer, but it wasn’t; he also spent five bucks on a pair of kinetic solar-powered plastic owls that rock from side to side. Lucas promptly disemboweled one owl to find out how it worked, but the other now sits on our bach windowsill, ticking from dawn to dusk, like the metronome that harassed me during childhood piano lessons, keeping time when no one else wanted to.

Lynda Hallinan’s Blog: The writing’s on the wall for 2020