Lynda Hallinan’s Blog: You say tomato, I say make ‘mine a double’


Lynda Hallinan perfects the art of the lockdown liquid lunch.

Life, according to Shirley Conran, the ex-wife of design icon Sir Terence Conran and best-selling author of the original chick-lit novel Lace, is too short to stuff a mushroom.

Life is also too short to juice a tomato but in lockdown last week, the concept of time proved, again, to be an amorphous construct, so I opted to spend half a day juicing tomatoes instead of teaching the times tables to my children.

I’ve never juiced a tomato before. Have you? I can’t say I’ve ever felt a need to and I probably wouldn’t ever have bothered, had I not clicked-and-collected 5kg of the finest vine-ripened, bumble bee-pollinated, hand-picked tomatoes from local artisan growers Anthony and Angela Tringham.

The Tringhams, better known as the Curious Croppers of Clevedon, favour old-time tomato varieties boasting succulent flavour and meaty flesh rather than the Stepford Wives’ uniformity of most modern mass-produced tomatoes. Tomato aficionados flock from the city every Sunday to buy their fruit at the Clevedon Village Farmers Market and Curious Croppers’ tomatoes are routinely name-checked on high end restaurant menus, in specialist grocery stores and on the pages of foodie magazines. Last week’s snap Level Three lockdown couldn’t have come at a worse time for the Curious Croppers, as it’s peak tomato season. When the news came through that there would be no farmers’ market the next day, and no orders from their hospitality customers for a week, the Tringhams had already filled their packing shed with close to a tonne of buxom Brandywines, opulent Oxhearts and sultry Spanish Reds, plus cherry tomatoes in a veritable rainbow of red, yellow, orange and chocolate-brown.

Bloody hell, you might think, though my first thought was Bloody Mary.

In a Covid crisis, you can turn to cocktails or you can turn to your local community for support. The Lazy Susan Facebook page, a greedy group of Auckland gourmands, came to the party by launching a Lonely Toms Club that, with help from central Auckland bookshop Cook The Books, contactlessly rehomed 800kg of those tomatoes in two days.

Even though I’m cultivating my own tomato crop this year, I wanted to do my bit so I bought a big boxful and juiced the lot. I juiced them raw, I juiced them roasted, I juiced and reduced them and seasoned and sluiced them with vodka. 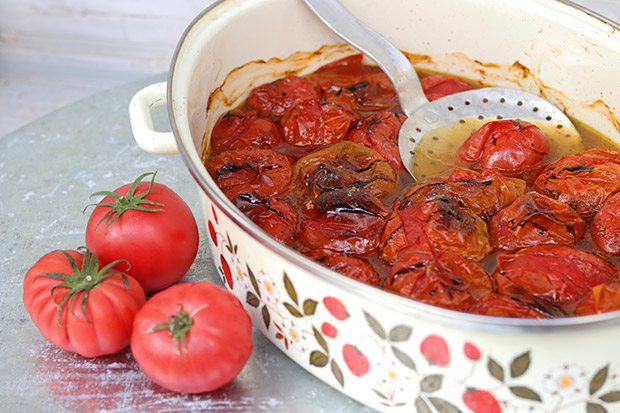 Raw tomato juice, it turns out, tastes dreadful, with a herbaceous bouquet of solanum leaf and lawn clippings that thoroughly confuses your tastebuds. Raw juice, stripped off its seeds, skins and flesh, also foams up like a badly poured beer only to quickly separate into three distinct layers: pink froth on top, a watery midriff and red sludge at the bottom.

Next I tried roasting the tomatoes whole — low and slow in a deep casserole dish with salt, pepper, balsamic reduction and celery salt – until they collapsed out of their skins, then I juiced them. The flavour was sensational but the juice had a soupy consistency, more like a kick-in-the-guts gazpacho than a classic cocktail.

Not to be defeated, I then tried gently simmering the raw juice with a sprinkle of brown sugar, fresh chilli, Worcestershire sauce, a dash of horseradish, a splash of Tabasco and a generous splosh of Lot Eight Yuzu-infused olive oil. It was bloody good and, with the school run conveniently cancelled, there seemed no reason not to knock back a highball or two while home-schooling my recalcitrant children. Rich in antioxidant lycopene, electrolytes and vitamin C, the Bloody Mary has long been touted as a hangover cure, a well-groomed hair-of-the-dog with French connections. It was apparently invented in the 1920s by a Parisian bartender by the name of Fernand Petiot, who jazzed up what was then known as “a bucket of blood” (just vodka and tomato juice) with lemon juice, celery salt and horseradish over ice.

You can, of course, serve her up as a virgin, sans alcohol. Aussie wags apparently call this non-alcoholic equivalent a Bloody Shame, though I prefer a Nuddy Mary. Add pink gin to make a Ruddy Mary, or absinthe for a Bloody Fairy.

Another quotable quote from Shirley Conran: “I make no secret of the fact that I would rather lie on a sofa than sweep beneath it.”

I, too, would rather lie on my sofa, watching Netflix and chilling with a highball of homemade tomato juice, or, as I like to think of it, a very, very, very finely chopped salad with a vodka vinaigrette and a swizzle stick of raw celery on the side. Slurp, crunch.