Welcome to the Lighthouse

Even though building a house and raising a toddler are both noisy operations, James and I live these days against a backdrop of breathing silence. Squirreled away up a dead-end road on the edge of native forest, it feels as if there’s a quality of stillness just beyond each movement we make. Every time we stop hammering nails or churning mud-brick batter in the mixer, the vast hush surrounding us re-establishes its dominance, filling us too if we let it.

There’s the song of passing weather, of course, and that of the birds – the morning cries of circling hawks, plaintive honks from paradise ducks and the nectar-sweet notelets from tui – but behind all of that, as deep as a moonless night sky, lies a quietness that’s easy to enter.
There is another silence, however, that, while richly concentrated, is not golden at all. It seduces us into moments of relaxation until we suddenly grow uneasy and worriedly ask, “Where’s Vita?” Where she turns out to be is deeply absorbed in two-year-old exploration – running a builder’s pencil over freshly painted walls, uprooting precious seedlings or industriously hacking away at setting concrete with a butter knife. 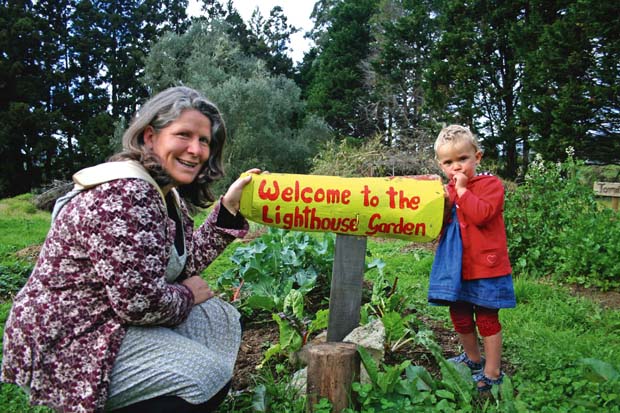 Donna and Vita in the Lighthouse garden.

Reminding us to laugh at such moments is Donna, who hurtled into our community like a whirlwind-tsunami hybrid. One of those larger than- life personalities with the sort of energy that moves mountains, she and her partner Darren disappeared into the kikuyu grass submerging their newly acquired land and spent their first summer in a vegetative frenzy, reclaiming a house, park-like grounds and vegetable plots from the wilds that had overtaken them.

That done, she was overheard questioning locals on what one did around here during the winter months.
When she learned the house behind the Bush Fairy Dairy was coming up for rent, she called a meeting. “Imagine what we could do with that space!” she declared to the four of us who attended. So we did and the Lighthouse was born.
It’s not quite all things to all people but it is a venue for weekly yoga, zen and qigong classes. Various healers operate from its rooms and the space is frequently utilized for community meals and meetings.

On different days of the week it hosts a Steiner kids’ group, a home-schooling activity day attended by up to 25 children, a choir and a toddler play group. Local art is displayed on the walls and workshops held there have included raw-food preparation, cooking, flax weaving, drama and creative-writing classes.
There are parts of the Far North that are every bit as impoverished as the media portrays, with rusting old cars, picked-over opshops, boarded-up store fronts, closed-down cafés and high rates of unemployment. When we asked Donna how she envisioned us covering the Lighthouse’s weekly rent, she rolled her eyes at our paucity of modus operandi and grandly announced we’d conduct a “gift economy”.
That means people pay just what they feel moved to pay. Almost miraculously, the $190 rent has been met every week and the power bill is always covered. Some people drop in a couple of coins while others present hefty bank notes to the Lighthouse account. Produce grown in the Lighthouse gardens is given away at a Saturday market stall, along with people’s excess garden goods and Donna’s baking.

The stall, too, operates as a gift economy, with people offering what they feel able to give in exchange for what they want to take.
The five of us who started the Lighthouse almost never get together to discuss it as the place seems to run itself effortlessly. Dozens of Lighthouse door keys are in use amongst community members and yet, without any rosters or organization, the place is always kept clean and stocked with essentials.
Not long ago we celebrated the Lighthouse’s first year of operation and Donna asked what we thought about expanding. Of course we said yes.

In the next post, Polly and James find a helping hand is worth two in the bush.