Polly comes face-to-face with Brutus, the local boar, and the Far North version of the Boogeyman.

When James and I shifted onto our land, I arrogantly declared us its first inhabitants. After all, we were the ones to build the first house and road.

I was wrong. Not only was our valley a scene of kumara cultivation for pre-European Maori, but since its inception, the territory has also been home to countless lineages of flora and fauna. Reigning over it all during his day was a wild boar of such colossal strength and proportions, he was known throughout the region as Brutus. 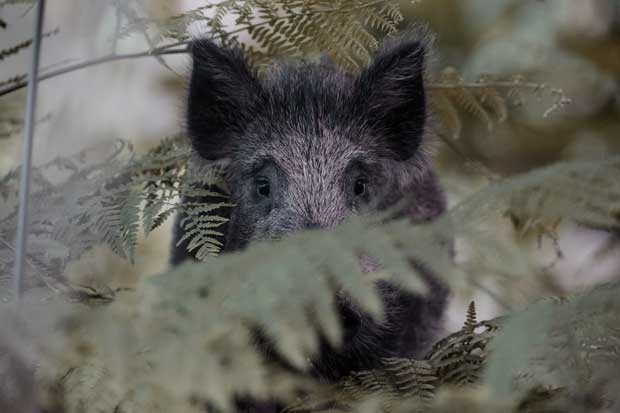 Described as a black bull on stunted legs, Brutus was famed for his ferocity and cunning; preying on sheep, lethally mauling any pig-dogs who dared to approach him and leading countless hunting teams astray in the dense forest cloaking our hills.

Such was his legend; his name replaced that of the Bogeyman for bush-dwelling children and sightings of him kept many a local tavern in late-night conversation. A bounty was placed on his elusive head and when the great boar was eventually felled, his weight of 100-plus kilos was declared a new record for these parts.

Brutus’s notoriety has been resurrected of late because of a new pig seen rooting its way past our garden. From a distance, it looked like a black Volkswagen on the move although I could tell from his unchanging composure that James dismissed my description as hyperbole.

A few nights later he encountered the beast for himself while out hunting possums.

There’s probably a rulebook somewhere emphasising why hunters shouldn’t shoot big creatures with low calibre rifles, but James certainly hadn’t been required to learn that when he studied for his gun licence. Instead, he discovered the hard way, what happens when a massive hulk of athletic muscle gets pinged by a puny bullet. The enraged boar charged.

“It’s a mammoth,” he told me, still visibly shaken at breakfast. Blinded at the last minute by James’s high-lumen headlamp, the pig hurtled off. So too, did his reputation, with word swiftly spreading to hunting parties eager for more of his blood.

The British have their foxes, the Far North has its pigs. Every weekend, groups of usually men and their hounds congregate on the edge of the forest before setting off on the trail of some unfortunate swine. That sticking a pig is a major recreational activity in these parts is evidenced by local fashion, with surprising numbers of folk unashamedly getting about in camouflage-patterned polar fleece, even on town days. Every second mud-splattered Hilux seems to sport wooden dog crates on its tray, while local chest-freezers are crammed with cutlets of pork.

Despite allowing hunting expeditions on our land from time to time, we aren’t a pig-hounding family. Nevertheless, James wanted the pillaging porcine out of the vegetable garden.

Upgrading his gun for a blunderbuss, he headed out after sundown and with much excitement, piggybacked home a sizable boar for salami production. Yet despite weighing in at 60kg, it wasn’t the Beast. Trotter-prints in the mud testify that something bigger continues to roam our hills.

The children were enthralled by the butchering lesson a friend held the next morning. The freshly-shot boar swung from leg hooks, rapidly shrinking in size as a saw reduced something wild and rather magnificent, to pink and white pieces of meat.

Eager to be in on the action, our neighbour arrived with a metal pig trap to set up near our gardens. The visiting butcher was aghast.

‘You can’t do that,’ he sputtered. ‘You’ll wipe out the whole population.’

Didn’t we realise these pigs were noble creatures? 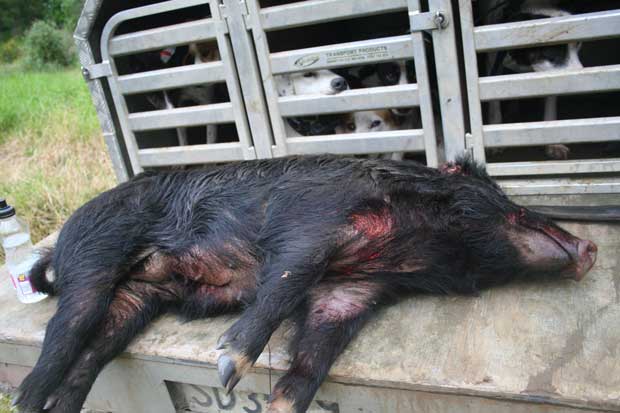 Waving his bloody knife from the chopping board pulpit, he explained how wild creatures deserve a sporting death, not a defenseless end within deceitful metal bars.

I’d imagined pig hunting with dogs to be a vicious and brutish affair, ending with the knife stabbing into the terrified creature, but as our friend waxed eloquently about becoming the pig you are hunting, I saw it wasn’t just blood-lust bringing him back for more.

Wildness is a quality. Unrestricted by artificiality and impositions, a boar is part of the forest it runs through, at one with its vital rhythm and song.

Don’t we all possess a kernel of something raw and undiluted; a feral nature deep within that yearns for connection to feral nature without?

Wilderness offers immersion into something bigger than ourselves. There are other ways to do it, but through his blood-thirsty sport, our friend was entering the elemental life, paring himself back to pure veins of feeling and survival and affirming the power of his life-force, even as he took that of the pig.

As a vegetarian who prefers her animals living, I’ve come to rather like thinking of our beast-boar up there in the forest, unfettered by fence-lines and running free.

From the misty look in his eyes as he finished his sermon, I know our pig-hunting friend secretly prefers it that way too.