Polly  channels Crumpy and Scotty when she braves flood waters in a Hilux – and becomes a true bush woman in the process.

This is that time of year when no reputable Far North bush dweller ventures forth without their gumboots. On the land, mud spreads like an infectious disease, oozing stickily from open wounds of earth through which we squelch, gumboot-clad, to inspect the damage between torrential rains.
If our family’s heading to some place civilised, we splosh our way to the car clutching our ‘town-shoes’; putting them on only after we’ve reached footpaths and tar-seal. Disembarking into shop-lined streets, a cry of dismay usually follows as at least one of us discovers a crust of brown dirt streaked across our clothing. The mud splattered over our car is further evidence we’ve come down from the hills. Since the great flood of two weeks ago, however, I’ve been walking a little taller in my identity as a bush woman, having earned my muddy stripes within our swollen stream.
I was out with the children when the rains began, enjoying a night of indoor toilets, electric lights and other mod-cons while we slept over at my mother’s. The weather bomb dropped at dawn with a great roll of thunder and such a volume of falling water, it felt as if the ocean itself was plummeting from the sky.
‘200 mls per hour,’ a neighbour later said.
The flooding was extensive. The Oruru River burst its banks, schools in the district were shut, all low-lying areas turned into lakes, and my route home was well underwater.
By late afternoon, sunlight had punctured the monotone sky, and Doubtless Bay was the colour of milky tea as floodwaters poured into the ocean. Trading town shoes for gumboots, I loaded us into the car and headed homewards. If it wasn’t for the 4WD in front of us, I would’ve turned back not long after we veered inland, for the road disappeared beneath a vast brown moving body of water. But semi-submerged fence posts marked where the road ran and seeing as the flood never ran deeper than the car-tyres, I gamely followed the leading vehicle through a couple of hundred metres of unconstrained river. 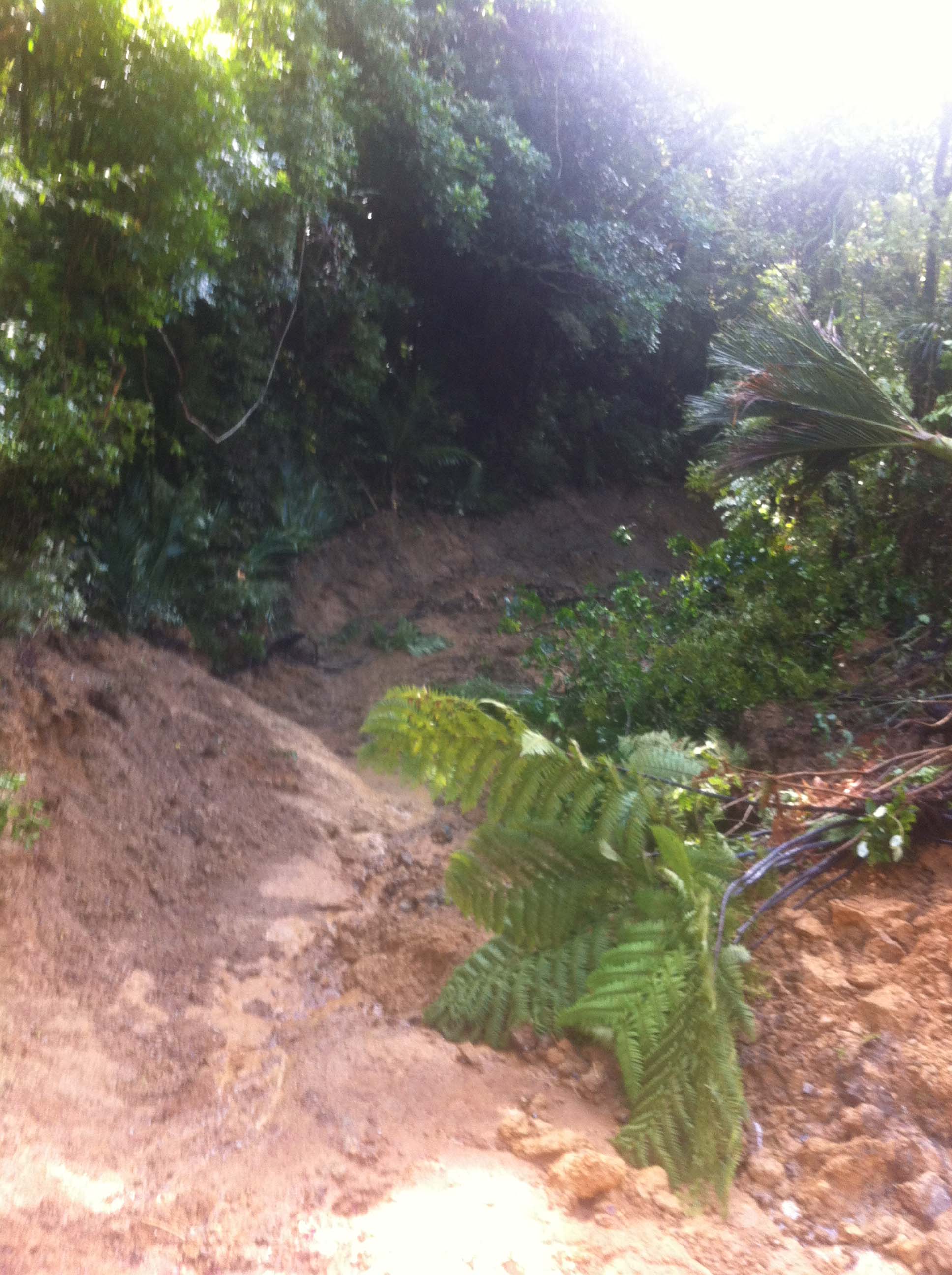 At the turn-off onto the gravel road, things began to get really interesting. While the stream was now back in its bed, flattened grass and logs dumped in paddocks showed that at its height, the flood had reached levels we’d never encountered before. Tree trunks littered the waterway like massive twisted carcases. Chunks of hillside had fallen away. A sort-of neighbour’s bridge was cracked beneath a fallen tree. Slips made the narrow road even more constricted. Tall eucalypts, felled by a farmer in preparation for firewood, had been picked up and carried across his fields. Big logs lay on the road, and as we took the goat track over into our valley, we marvelled at a new waterway carving its way downhill beneath us.
At our ford I stopped the car and stood for a while, surveying the murky water thoughtfully. Headwaters are quick to rise, but subside just as swiftly, and while swollen, our stream certainly looked drivable. It was the large bank of freshly dumped silt on the far side that was making me pause.

My mind flashed to an old TV advert for Toyota Hiluxes, in which a hapless creature called Scotty wailed in terror as Barry Crump roared his trusty ute through a perilous landscape.
‘This is what Hiluxes are made for,’ I told myself firmly, climbing into the car. Five-year-old Vita immediately adopted the Scotty persona, shrieking dramatically as I revved us into the water. We rumbled through the stream, up the other side, and there we stuck; wheels spinning and the whole vehicle sliding sideways in the mud.
There are occasions when swearing in front of children is warranted, and this was one of them.
‘We’re going to die,’ Vita howled over the rush of the stream as I tried to reverse back into it. The car spun on the spot. Tempting though it would have been to abandon the machine and hike the last kilometre home, I was aware this was modelling neither resourcefulness nor female grit. Besides, I could do without the look on James’s face when he learned where I had parked, especially as more rain was forecast. After some further wheel-spinning that would’ve made boy-racers proud, I adopted an air of feigned calmness for the sake of the kids, hopped from the driver’s seat into knee-deep mud and inspected the half-buried wheels. A plan began forming. Gathering logs, sticks and rocks, I pressed a path forward from each tyre.
‘Now watch this,’ I told the wide-eyed children. A neighbour appeared and with much revving, reversing, shouting of instructions and splattering of mud, we heaved our way forward, eventually gaining traction and climbing from the silt.
By the time we’d made it up the last hill to our home, the mud-bank by the stream had grown to neck-deep proportions, and a family legend was forming of the day mama braved the great flood.
‘I am a true bush woman,’ I announced to James proudly as he surveyed our mud-sprayed car. Never had the mudpack I was caked in felt so earned.