Jim’s daughter  adopts a ‘squeaky wheel’ strategy to get a new car,  while he reflects on the Ford Falcon that got away.

It was the start of a long drive and I was a captive audience with the eldest in full flow explaining why she needed a car.

There was no argument from me, but then came the kicker. Could the bank of Mum and Dad chip in?

“Look at how many of my friends have got cars and their parents (our friends too) paid for those cars.”

She rattled off a list of names and I was powerless at the time to dispute her argument because I simply didn’t know if our mates had chipped in.

Turns out, the daughter was indulging in some real Fake News.

But her arguments for why she needed a car (this of course is after she’s actually passed the test to get a restricted licence) were solid. It will give her independence and reduce the taxiing her parents have to do even for a daughter who is a regular user of buses.

We have discussed a deal that would see her buy her Mum’s car at a below market price, but as that car is steadily falling to bits, we may not sell it to her.

My first car wasn’t a car, it was a ute. I bought it with a small loan Dad guaranteed at the bank and sold it to pay the fees for my journalism course.

It was the first of 14 cars I have owned, a remarkable tally considering my wife had owned just one before we bought our first car together. By then I’d churned through four vehicles with the three cars each with stories to tell. Jim with his Ford Falcon outside his mice-infested flat in Mt Vic, Wellington.

After the ute I bought a Toyota Corona. It was dual fuel but the CNG stopped in the rain which was embarrassing on the rare occasion I was out on a date.

I sold it to two German backpackers. They left Auckland happy but rang from Huntly to say the engine had blown up.

After that I bought a Toyota Sprinter which looked cool but was too small for my 6ft 2 inch frame. What’s really stupid is that I sold it to a mate and bought it back a few years later. It hadn’t grown and I hadn’t shrunk.

My favourite car was a 1970 Ford Falcon. It cost me $1200 to buy and a lot more to keep on the road. I’m not a car buff but this old girl was magnificent. She was super fast, although for a long time I didn’t know exactly how fast because the speedometer didn’t work.

It was fixed it when I got the heater fixed, which came after the gearbox had exploded right when a mate who was driving at the time complimented the old girl for being “pretty choice”.

After that, no-one was allowed to sing her praises.

Although the heating was repaired, cold was hot and hot was cold for a reason the mechanic explained but I never truly understood. The now-working speedo suggested I’d been lucky for a long time not to be given speeding tickets.

But she was that sort of car with a bench seat, a powerful engine, massive boot and a thirst for petrol that would bankrupt an oil sheik today.

There were no mod-cons and my then-girlfriend often remarked that it was frustrating not having a mirror on the visor. I taped a photo of her to the visor but apparently that was neither funny nor useful.

She’d had just the one car, a tiny Holden Barina that I said was more like a Bernina. She left it with me when she went overseas and I sold it to her best friend. A few weeks later the engine blew up.

As a couple, my wife and I have owned three Corollas – red, white and blue. The blue one was almost dead when we bought it and even worse two years later when we traded her with a dealer in Hamilton. He sent a lovely old man to Auckland to deliver our new car and pick up the bomb.

“Will it make it to Hamilton,” he asked.

“I’m not sure,” was my honest reply. Afterall, I had a track record for selling exploding engines.

I’d like the eldest to get a car that’s reliable and cheap to fix,  neither of which describes the cars she sends us via Trademe.

She is, though, slowly coming to terms with the fact the money she’s earned from her part-time job may not be used on a new surf-ski if she wants to be driving herself to the beach.

I’m not one of those who gets attached to vehicles. 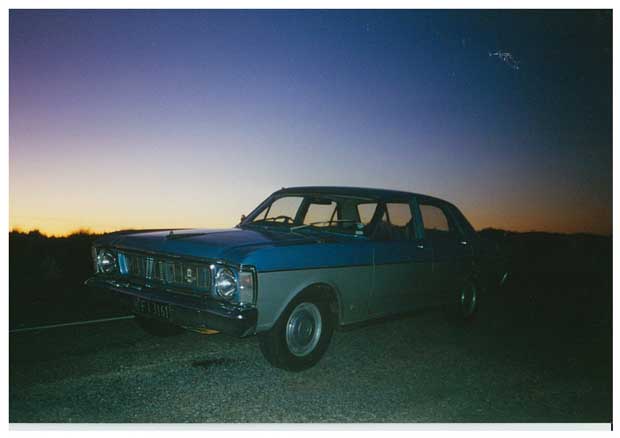 I loved that old Falcon but I was happy to sell her. The money paid for my air tickets so I could join my girlfriend in Paris for the start of our OE together.

It’s the best deal on a car I’ve ever had because that girlfriend became my wife.

Not sure if the Falcon’s engine blew up.

Jim Kayes’ Blog: In the swing of things