The rabbits were signed on as teachers. Expectations weren’t unreasonable; the job simply involved basic lessons in animal care. The children were eager students, readily signing up for roles in the classroom run and racing to be first each morning with offerings of greens. And while James initially thought the words ‘rabbit food’ belonged in a culinary context, he was soon dutifully pushing comfrey leaves through the netting as he suppressed a hunger for stew.

It wasn’t long, however, before the bunnies revealed that teaching maths was their preferred vocation – namely multiplication. Long before we’d determined their genders, they were at it like, well, rabbits. Our pekin ducks had already staged tutorials in reproduction, igniting feminist fire in the children as they observed forceful drakes in action and confirming to six-year-old Vita her suspicion that boys of all species are repugnant.

The humping rabbits took turns on top. While I queried whether this was acceptable behaviour in siblings, Vita had deeper concerns. Operating on the maxim that bigger is better, she’d already asserted ownership rights to the larger of our new bunnies but doubt now shadowed her love. Supposing she’d claimed a male? Setting up camp by the hutch, she subjected her furry instructors to undignified inspections, studying their mating with Attenborough-like intensity, announcing a switch in proprietorship every time the confused rabbits changed position.

Clover solved the gender conundrum by birthing four babies that pinged about the run like exploding popcorn once they’d left the nest. When the curriculum on creature-compassion was resumed, the kids unintentionally opened a school of hard knocks.

“Not by the ears,” I called with increasing terseness as three-year-old Zendo explored rabbit-carrying techniques. After several expulsions from the run, he started to get the idea. So did the animals. Soon both children sported numerous scratches as the bunnies learned how to maintain authority.

Meanwhile Coco and Clover continued their presentations on proliferation with not even a day’s parental leave. While I worriedly Googled rabbit fertility, a huge mound of dirt appeared from under the hutch. Surely there wasn’t another nest down there? Alarmed at where it might end, I summonsed a vet friend but torrential rain arrived before he did, flooding the burrow and washing out nine drowned, hairless babies. It was hard to look genuinely sad at their funeral.

The vet operated on our picnic table, surgically stripping Coco of both his reproductive abilities and his maths-teacher credentials. Muscling in on the home-schooling Pax, the family dog, opened an impromptu class in the presumption of innocence when we went to dispose of the testicles. Could we prove beyond reasonable doubt that he ate them, I asked the children as the filthy hound licked his lips?

Meanwhile, Zendo had been absorbing unspoken tuition on the perils of incestuous relationships. “I’m not going to mate Vita when I grow up,” he announced unexpectedly during the next car ride out from the valley. “Fair enough,” I said evenly, keeping my eyes on the road. We digested his statement in silence for a while and then, “Why not?” his sister demanded, sounding rather indignant. “Because then I’ll have to get my testicles chopped off and it will hurt.”

We’ve kept one of the rabbit babies. In mathematical terms, the episode might translate as one plus one equals three but, given we don’t yet know the baby’s gender and the hutch door’s been absentmindedly left open so many times, who knows where the sum will end? I testily remind the children subtraction is probable each time I lunge through the bush for absconding rabbits.

That they’d like to resign their positions as teaching pets is obvious. You only need watch them staring out at the hills to feel their yearning for freedom. Feeling guilty, James and I debate letting them go, not only into a damnation of stoat-filled shadows and hovering hawks, but into a paradise of vegetable gardens and fruit trees. That consideration snaps our kindly vein shut like a prison door every time. 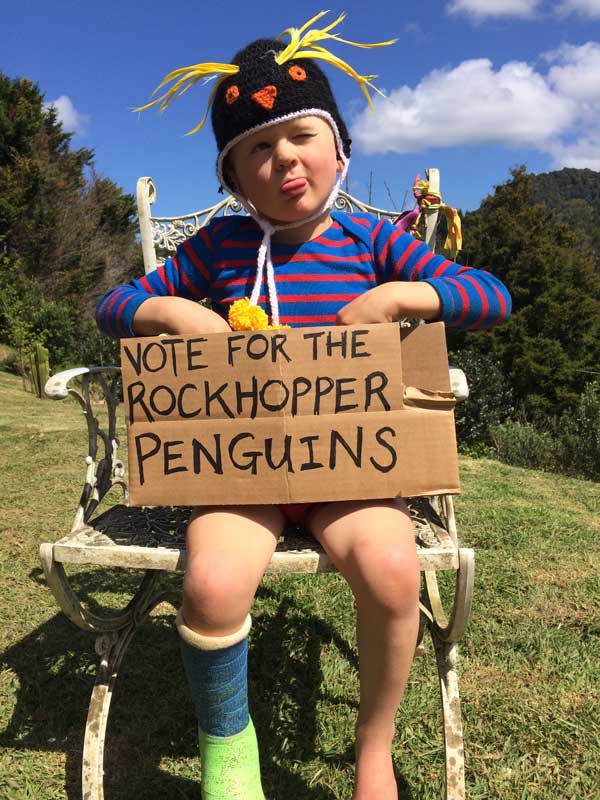 Who to vote for in the annual Bird of the Year competition is a no-brainer in our household. Penguins have always been a favourite of four-year-old Zendo, but since discovering the punk-feathered Eastern Rockhopper, he’s become a passionate advocate for the endangered bird and is urging all New Zealanders to embrace those yellow eyebrows and give it their vote.
‘Call me Rockhopper Boy,’ he instructs as he pulls on his mascot hat…