James hogs the limelight when he goes on the hunt for a pig and Polly wisely stays at home.

When our most recent HelpXer politely inquired if we’d mind him going bush for several days, I wondered if I’d heard him correctly. In winter, the forested hills framing our garden tend to be bathed in mist, rather than sunshine and the blanketing greenness exudes cold dampness. But while I was busy wrinkling my nose at the prospect of dossing down on a wet forest floor, James was acquiring an enthusiastic gleam to his eyes.
Excusing myself for bed, I left the two men sitting by the fire, talking tactics. By the next morning, it was no surprise to learn James would be accompanying Tom on his bush expedition.
‘We’re going to catch a pig,’ my husband announced rather grandly.

Tom, aged 24, is known in certain circles as the Scottish version of Bear Grylls. A wilderness aficionado, he likes to take himself into uninhabited places around the planet with not much more than a knife, a flint, a tarpaulin and a saucepan.

Once camp’s established, he acquaints himself with local flora and fauna and practices survival skills – eating only what he can forage. Filming himself at work, he’s established a following on You Tube and was keen to add a New Zealand chapter to his catalogue.

James had been talking about catching a wild pig for some time. Our land runs seamlessly into large, forested reserves through which herds of feral pigs roam. We hear them at night, running close to the house and squealing out news to one another in porcine language. Occasionally a pig hunter will ask to come onto our land for a hunt, bringing packs of dogs straining to get on the trail.

Even more infrequently, a dead pig is brought out – piggy-back style, on a triumphant hunter’s shoulders – and heaved onto the back of a ute amidst animated narration of the kill.
But James had no desire to corner a pig with baying hounds before ‘sticking’ it with a knife. It wasn’t blood lust he was after; more a hankering for wild bacon.

‘We’ll take a bucket of food scraps into the forest and lure the pigs into a spot,’ he told me. The plan was to build a hide down-wind and lurk in there with a rifle. Possum stew was planned as the first night’s dinner. Pork cutlets on steamed fern fronds would be served on night number two.

When Tom fails to find food in the forest, he goes without. It adds to the survival experience, he told me.
‘But we’ll need to have coffee!’ James pushed the packet into his pack in a no-nonsense manner as the men prepared to leave. When Tom wasn’t looking, pasta and coconut milk were slipped in too.

I didn’t hear from James until well after dark on the first night, when a text message came in.
‘We’re about to hunt possums for a stew after setting up camp and putting the pig bait in place.’

Stepping outside to go to the toilet, I could hear pigs grunting loudly down by the stream. The bush was exhaling icy-breathed dankness and I felt only pity for the forest adventurers as I scuttled back inside to the warmth of the fire.
Another text message arrived the next morning. ‘Surprisingly there don’t seem to be any possums out here! I walked around for hours and finally shot one at 3 am which we’ll cook. No porcine noises in the night either. Hard to fill the pot out here. In fact, the only obvious life forms are the mosquitos which thrummed around our heads. Aren’t they supposed to have died off in winter?…’ Possum Stew on the boil.

At lunchtime, a photo arrived on my phone showing possum stew heating over a fire. ‘I could quite get used to life in the bush,’ James texted with gusto. Using his edible plant guide, Tom had harvested black fern frond stems to accompany the meat, and they dined on kiekie fruit as they waited. While the fruit tasted like pears; the ferns were so bitter, the stew was declared barely edible.

That night the men retreated to their hide and lay in wait for the pigs. And waited… And waited… Crouching motionless, guns poised, they became aware of a shuffling sound. It was a pig alright, but unfortunately for the two hungry hunters, it had failed to read the script and was stalking them from behind. By the time they’d swivelled round with their rifles, dinner was gone 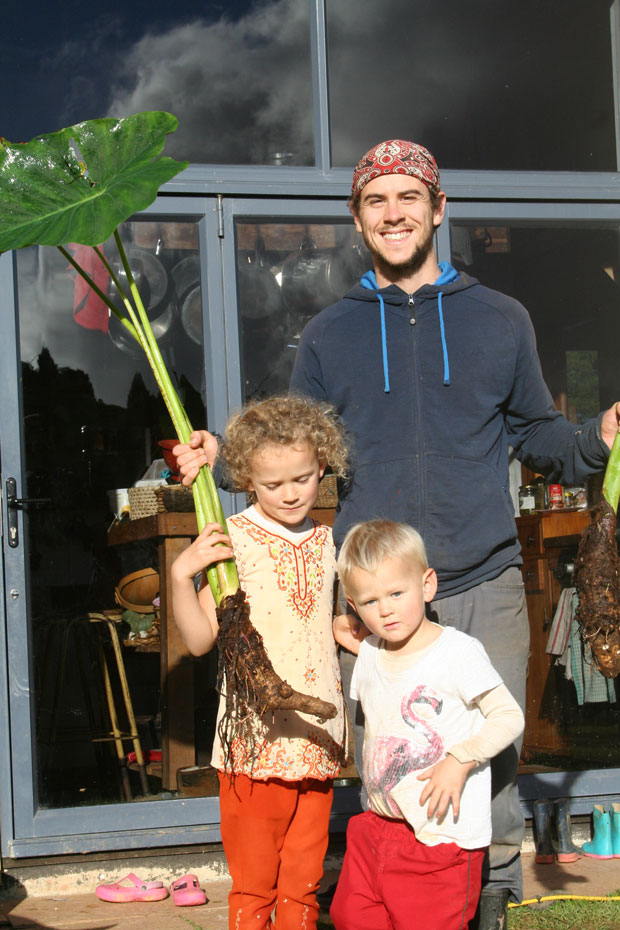 .
Food supplies exhausted, Tom and James had nothing for dinner and more of the same for breakfast. Cooking a meal was their first priority when they finally made it home, but after they’d finished gorging; James announced to the startled children that next time he’d be taking them with him.

For once two-year-old Zen kept any enthusiasm firmly in check.
‘We’ll take sausages,’ James coaxed. ‘And go in summer.’
As for Tom, he’s now departed to practice surviving in warmer lands where the prospect of possum and fern-frond stew is happily, logistically impossible.